DCSki’s Editor is in the midst of a road trip through western states, in search of snow and adventure. After taking a break from skiing to explore the attractions in Glenwood Springs, Colorado, he returned to the slopes on Tuesday, February 20, 2018, to experience Vail.

Vail is all of the things.

None of this comes cheap, of course. Vail is a high-end ski resort and it comes with unapologetically high-end prices. But Vail offers an overall experience that’s hard to beat.

One could spend an entire ski season exploring all of the terrain at Vail. I only had a day.

But first, I had to get there.

When I last checked in, I described how I was saving some money by staying in Glenwood Springs — a cute little town off of I-70 that is located within an hour’s drive of Vail, Beaver Creek, and Aspen Snowmass. When you stay slopeside at a ski area, it doesn’t matter if it snows overnight — you pop on your skis and immediately hit the fresh powder. If you have to drive to get to the resort, you’re dependent on the road conditions. This is what I-70 looked like on my way to Vail: 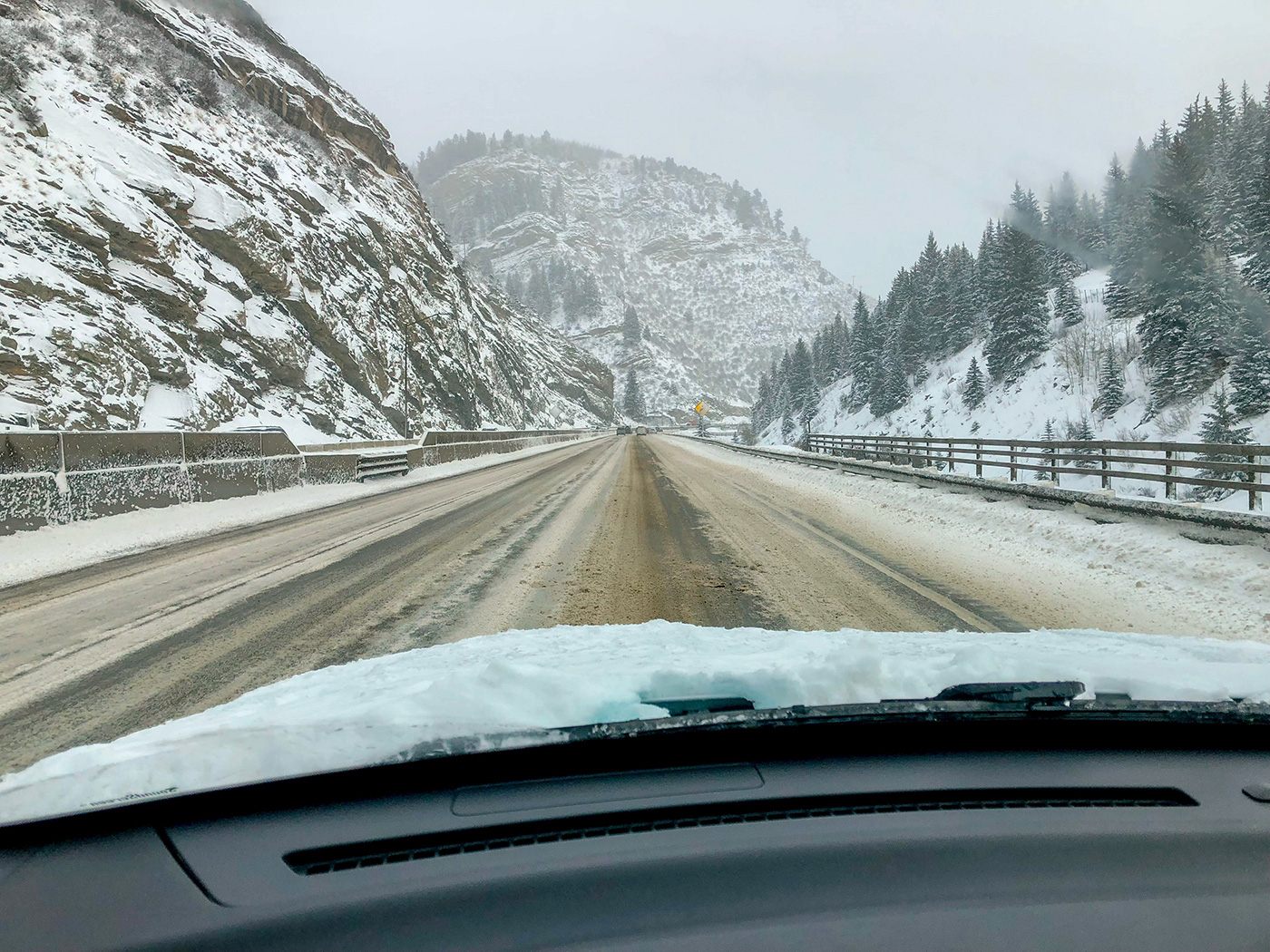 Interstate 70 was a bit dicey on the way to Vail. Photo by M. Scott Smith.

Patches of snow, ice, and slush made the driving a little treacherous, although as is often the case, highway crews were out in force plowing. It was lucky that I was heading east towards Vail, though — a chain law was in effect on I-70 just past Vail. Not many people were getting over the Continental Divide that morning.

I arrived in the Lionshead village (one of the two main village areas at Vail) and parked in the Lionshead Parking Garage. It’s conveniently located a short walk from the base area, but you’ll have to pay $30 for the privilege during the winter. (In the summer, the Town of Vail’s parking garages are free.)

I then geared up and hopped on the Eagle Bahn Gondola. My goal was to make it to Blue Sky Basin — the newest section of Vail that offers a backcountry skiing experience. In Blue Sky Basin, you really feel like you’re out in the wilderness — because you are. Getting there requires going up Vail mountain, down the infamous Back Bowls of Vail, and then up yet another mountain. 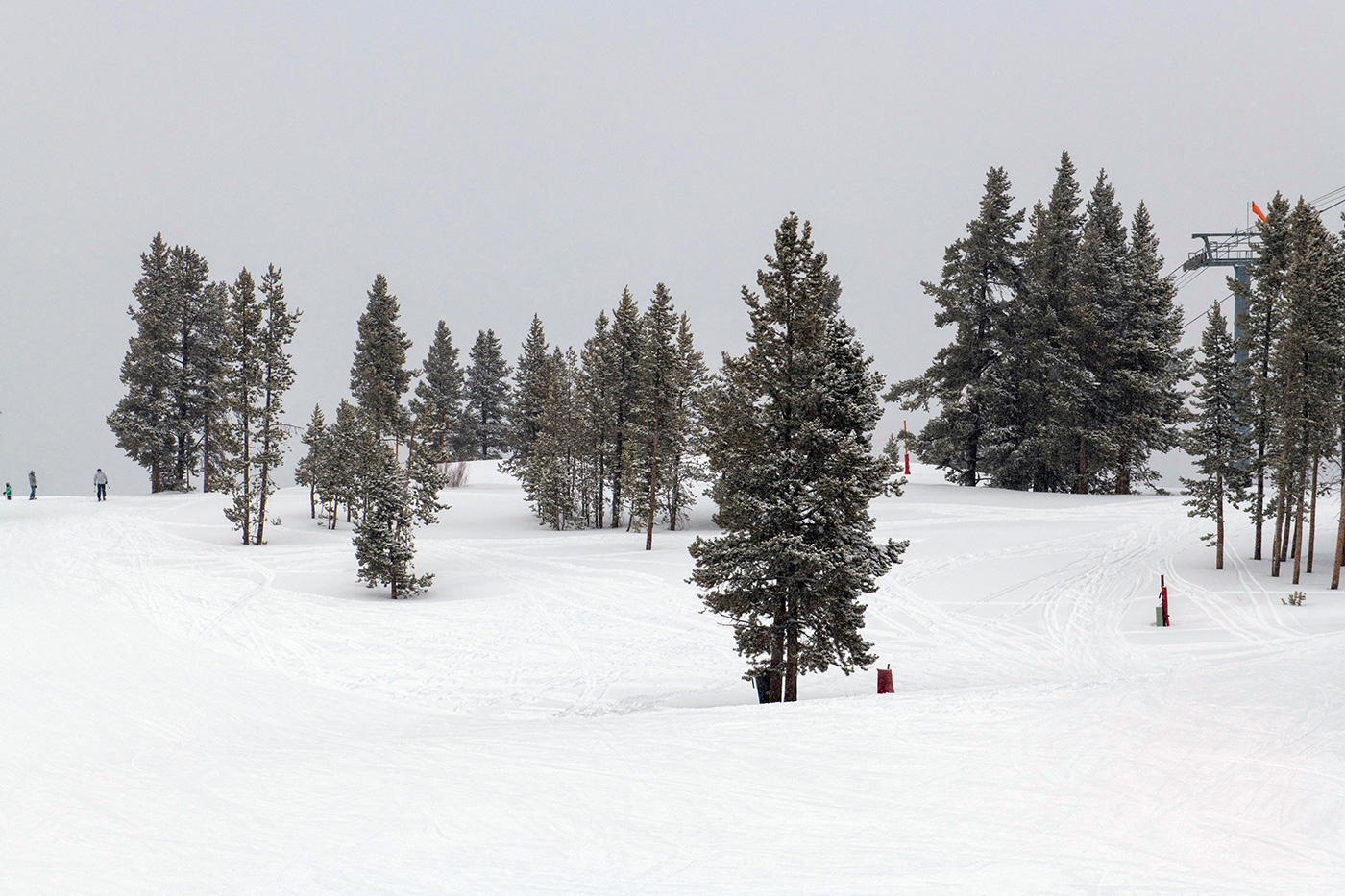 Groomers off the top of the Eagle Bahn gondola. Photo by M. Scott Smith.

From the top of the Eagle Bahn gondola, I was distracted by great snow at Game Creek. Game Creek is almost like a ski area within a ski area at Vail, serviced by the Game Creek Express Lift and offering multiple fun paths down. It’s not a bad place to start a morning; once the crowds pick up you can continue on your way to other parts of Vail.

After doing some runs at Game Creek, I ping-ponged up and down a few lifts, working my way towards the mountaintop Two Elk Lodge. From there, it was time to swoop down to one of my favorite areas at Vail: China Bowl. Parts of China Bowl are wide-open, treeless skiing, but you can also dip into the trees and forge an infinite variety of paths as you work your way towards the bottom of the Orient Express Lift. On past trips to Vail, I have spent more than a day just exploring China Bowl. Vail had fortunately received a healthy amount of fresh snow in the week or two leading up to my visit; prior to that, the Back Bowls weren’t in particularly great shape due to a lack of early-season snow. 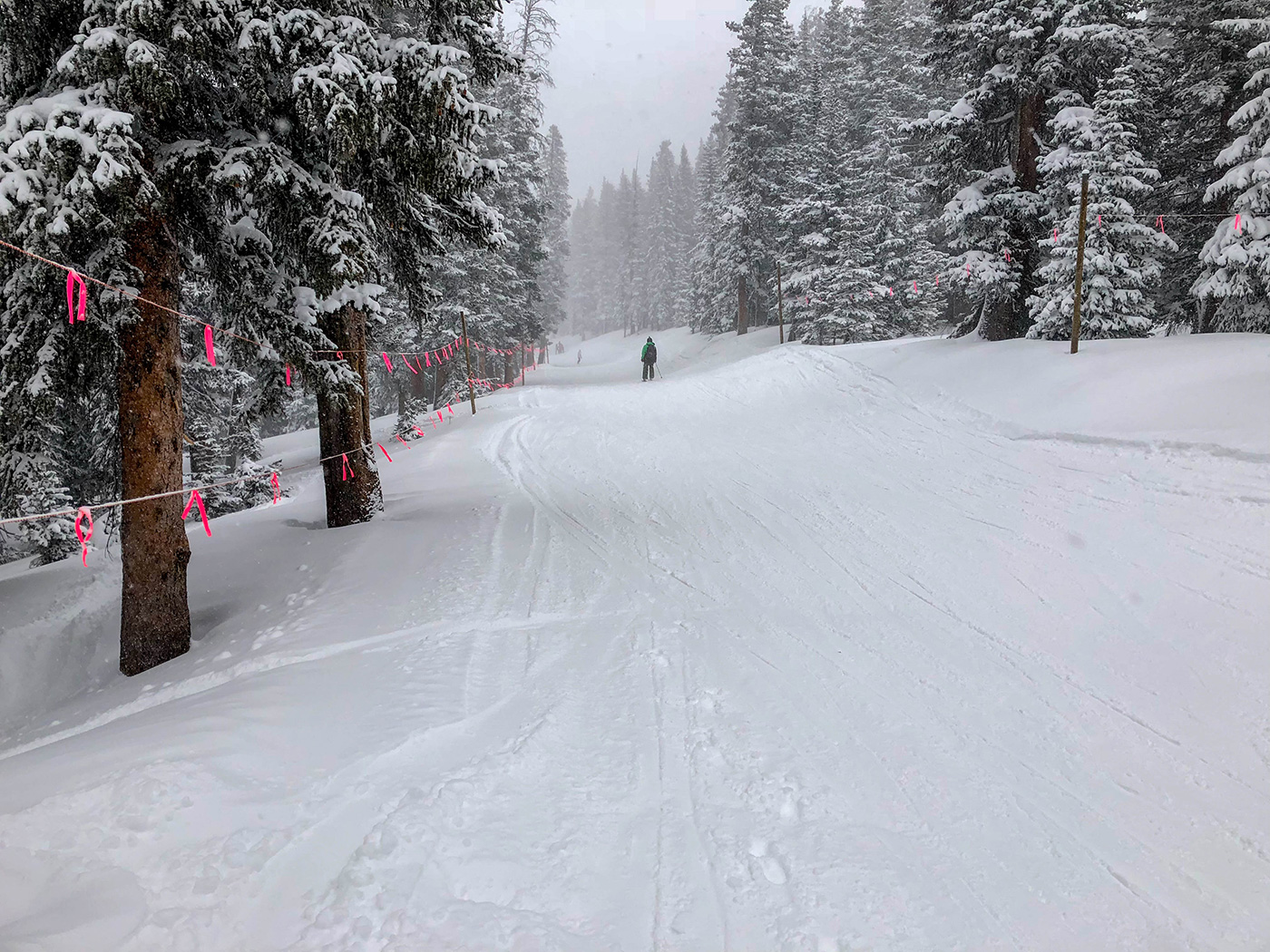 From the bottom of China Bowl, I took a trail that led to the base of Blue Sky Basin. By now, the cold temperatures and light snow — which was more granular than fluffy, stinging my cheeks as it hit them — was starting to take its toll on me. My fingers and toes were numb by the time I reached the top of the Skyline Express Lift. From past visits, I knew that the mountaintop view was extraordinary — but not on this snowy day, where visibility was severely limited. I made a beeline for Belle’s Camp, a warming hut that was so crowded you could barely walk in the front door. I lingered just inside the entrance until feeling began to return to my toes. Then, I explored the fantastic terrain of Blue Sky, which provides a variety of terrain that will meet any skier’s preference.

Whoah! Look at the time! I felt like I had just started skiing at Vail, and it was now well into afternoon and time to start working my way backs towards Lionshead before the lifts closed. 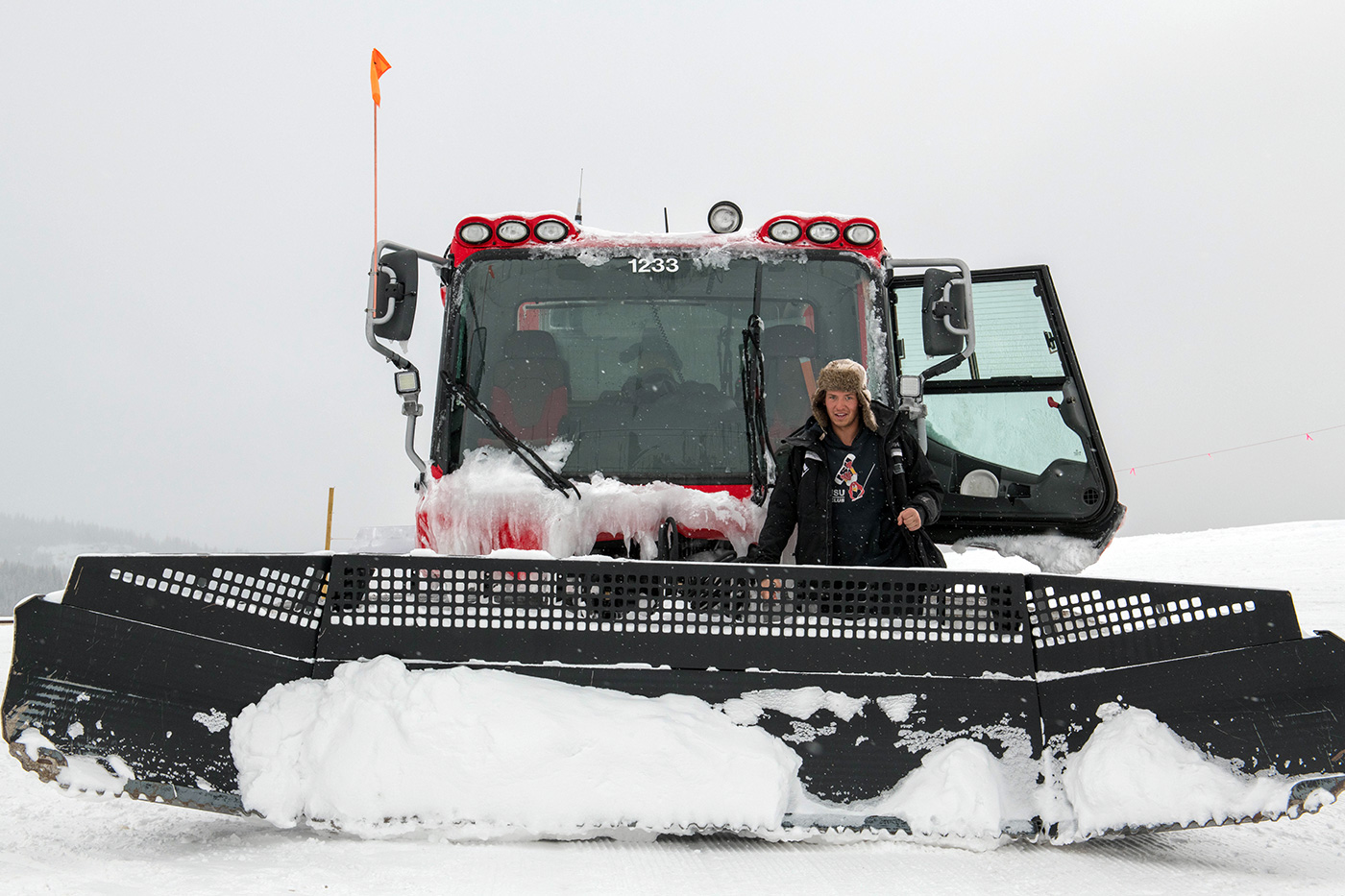 Even snowcat drivers have to scrape the ice of their windshield. Or in this case, chip it off with a chisel. Photo by M. Scott Smith.

That’s what Vail will do to you. The terrain is so expansive that you can barely scratch the surface in one day, or even one week. There are 195 named runs, and an infinite number of gladed or wide-open-bowl runs. Vail has 5,289 skiable acres. Thoughtfully spread across those acres are 31 lifts — nearly all of them modern, high-speed lifts.

You get the definite sense that Vail doesn’t cut corners.

While the skiing is world-class, the town of Vail also stands out. 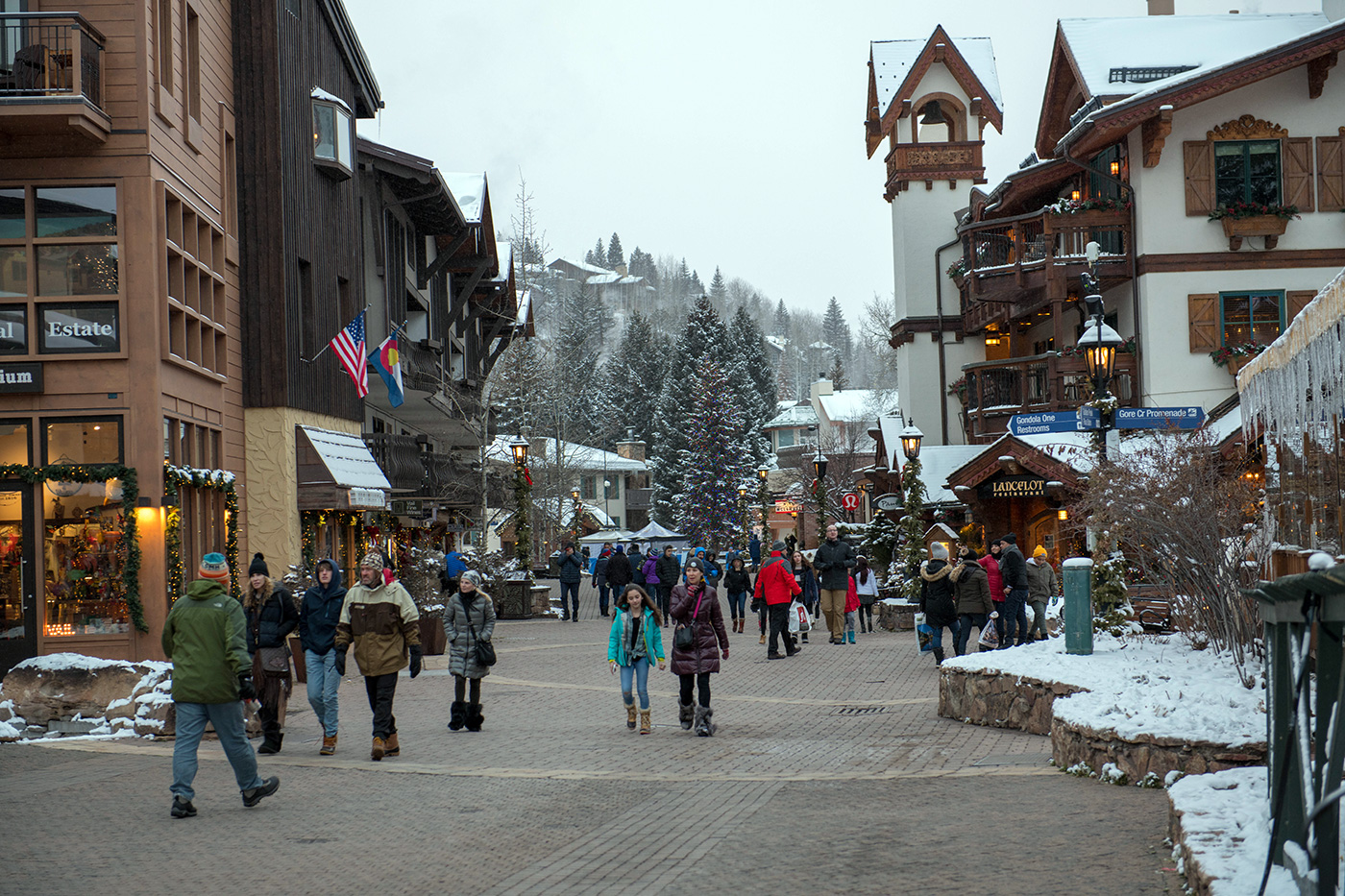 A lot of ski areas are essentially day areas. 30 minutes after the lifts stop running, the base areas of resorts such as Sun Valley or Snowbasin clear out. Vail has two primary base areas — Vail Village and Lionshead. Both are pedestrian-friendly. Both offer extensive shopping and dining. Vail doesn’t have the authentic feel of an old mining town — everything at Vail feels recent and modern and engineered. There is almost a Disney feel to it. 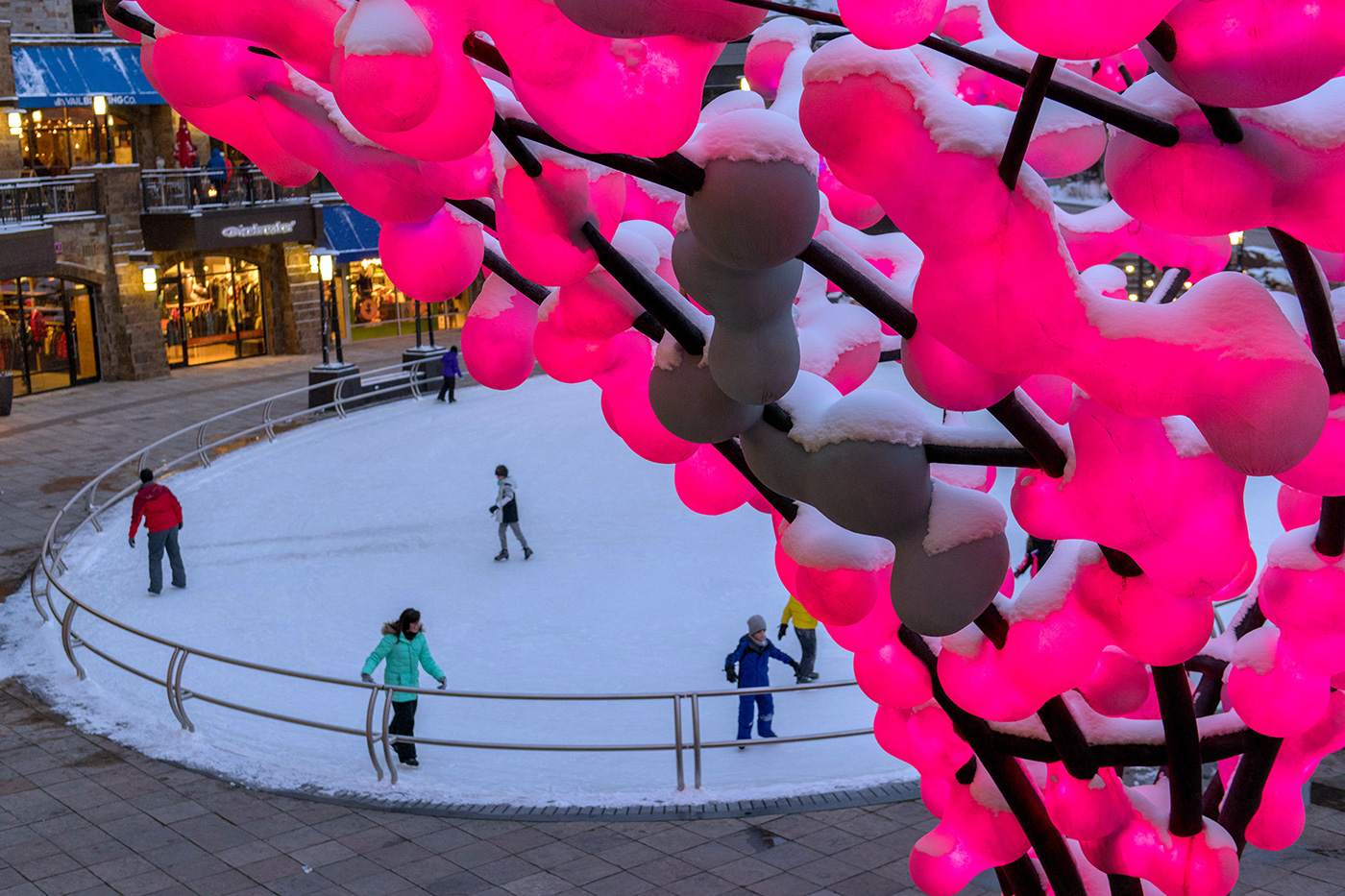 Visitors ice skate in the shadow of a kinetic light sculpture. Photo by M. Scott Smith.

A free town shuttle makes it easy to get from one side of Vail to the other, but it’s also not that far of a walk. There is a wonderful trail that weaves its way through the Vail valley, connecting Vail Village with Lionshead. At times it follows a stream, and it passes landmarks such as a public library. On a calm, snowy night, it’s surreal to walk along that trail or to explore the two village areas. 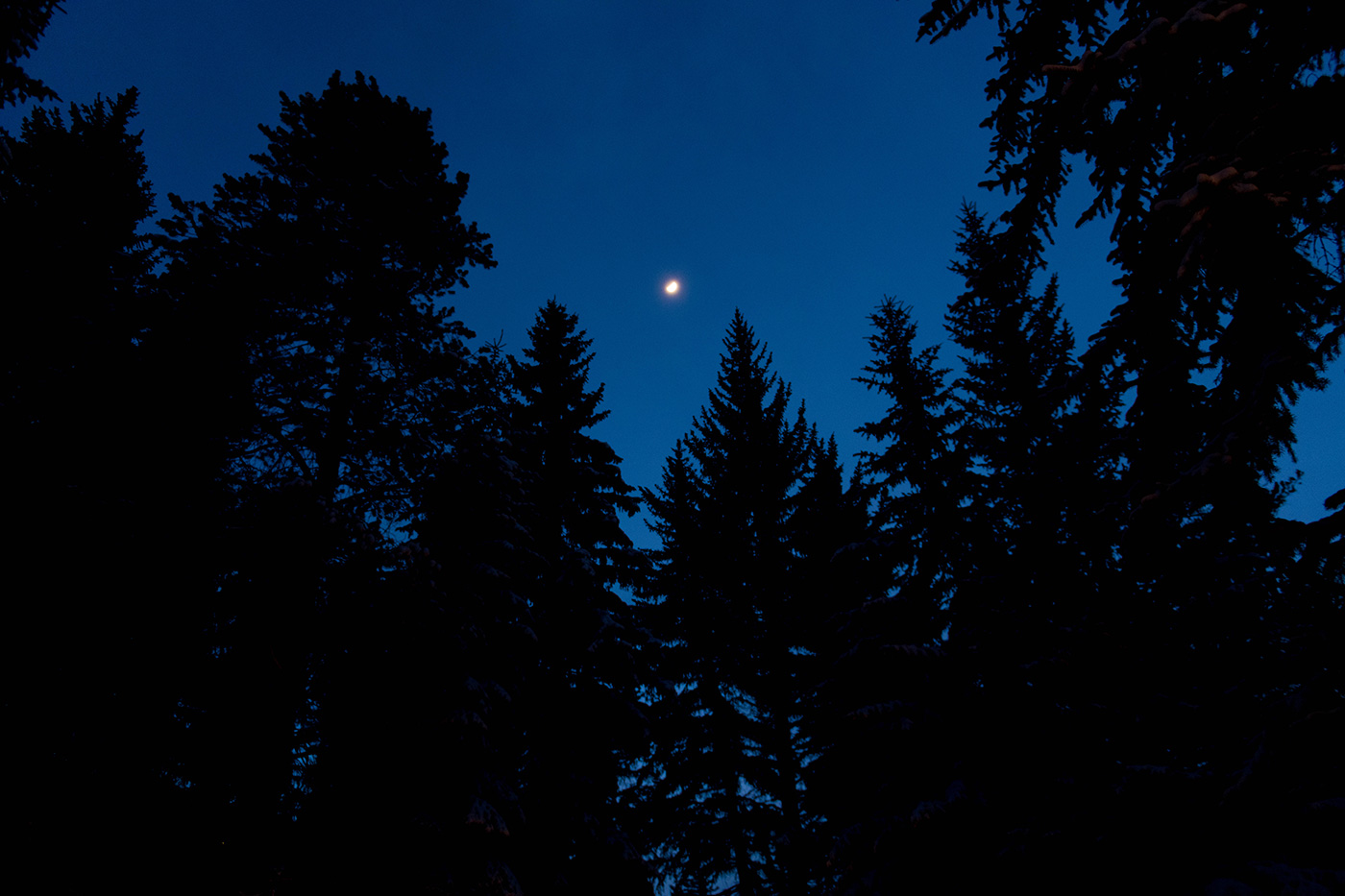 The Vail Village offers the most shopping and dining options. Interspersed among galleries and luxury brand retail outlets are art installations, including an “ice furniture” exhibit. A fountain displays an ever-evolving show that includes jumping water, lights, and fire. As you stroll through the village, you can hear live music coming from various bars and dining venues. You’ll also find an ice skating rink at both of the villages. 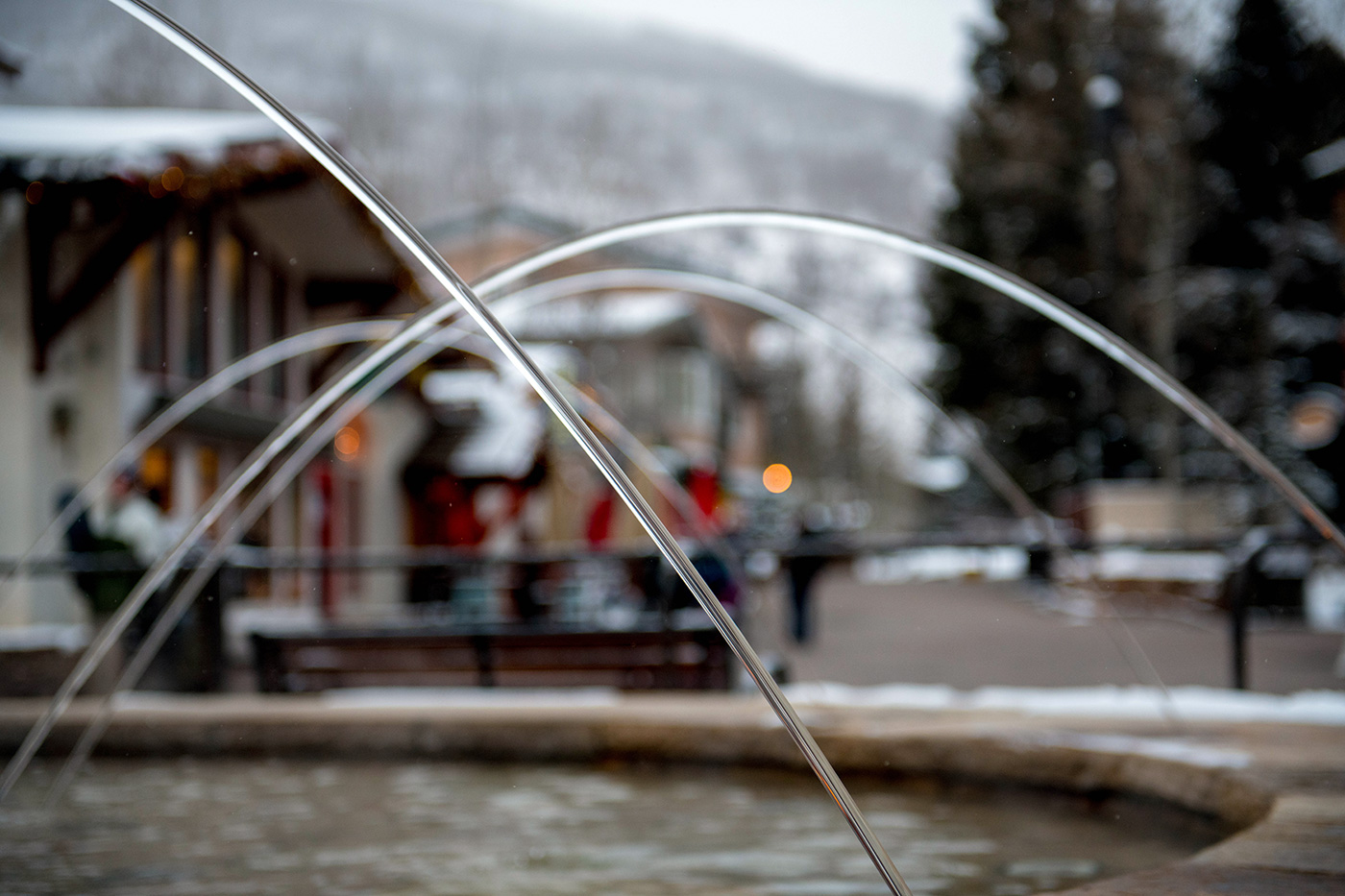 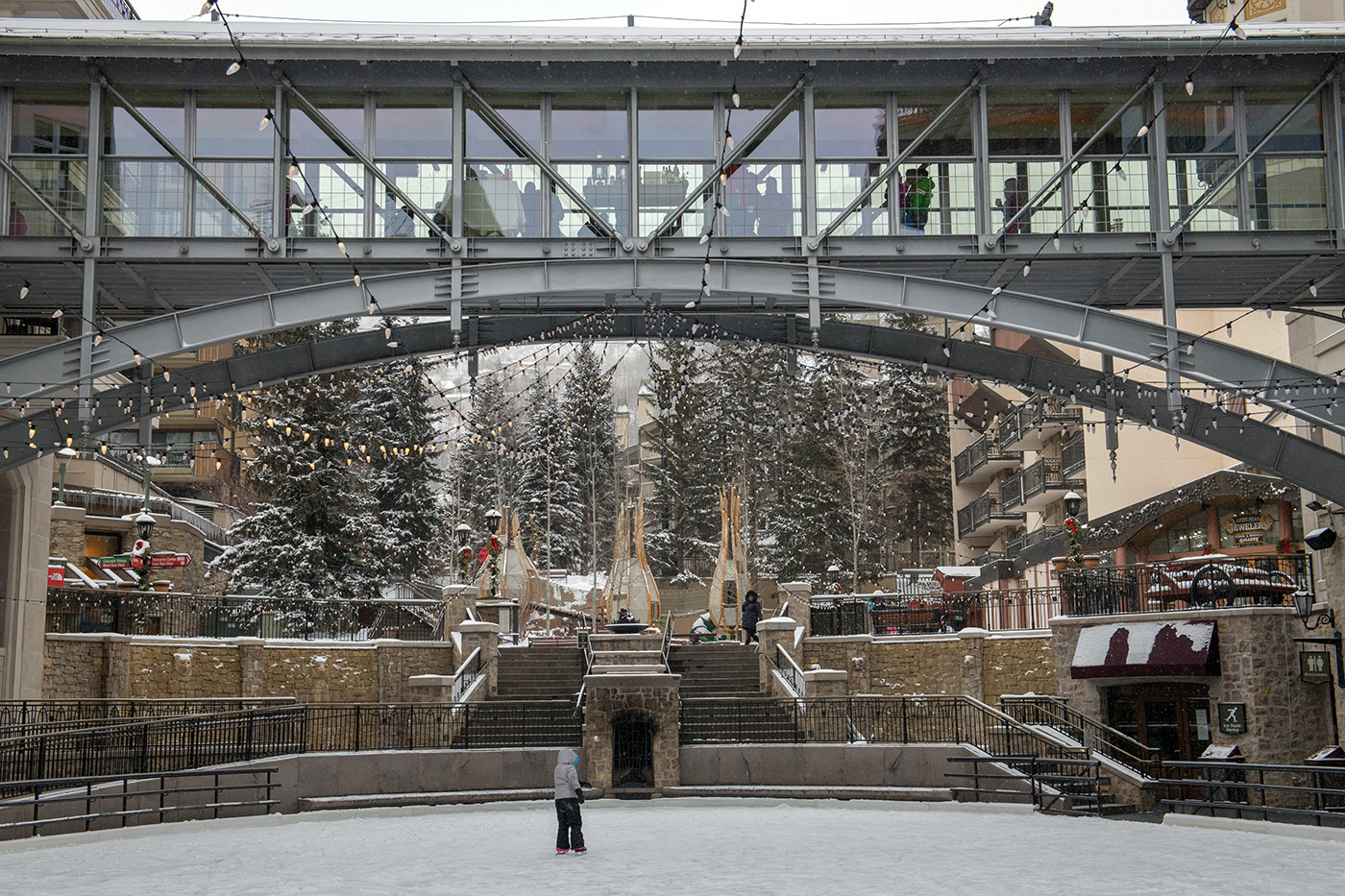 An ice skating rink at the Lionshead village. Photo by M. Scott Smith.

It may be too posh for some, but even the most rugged skiers might secretly enjoy the refinement and comfort of Vail’s villages. 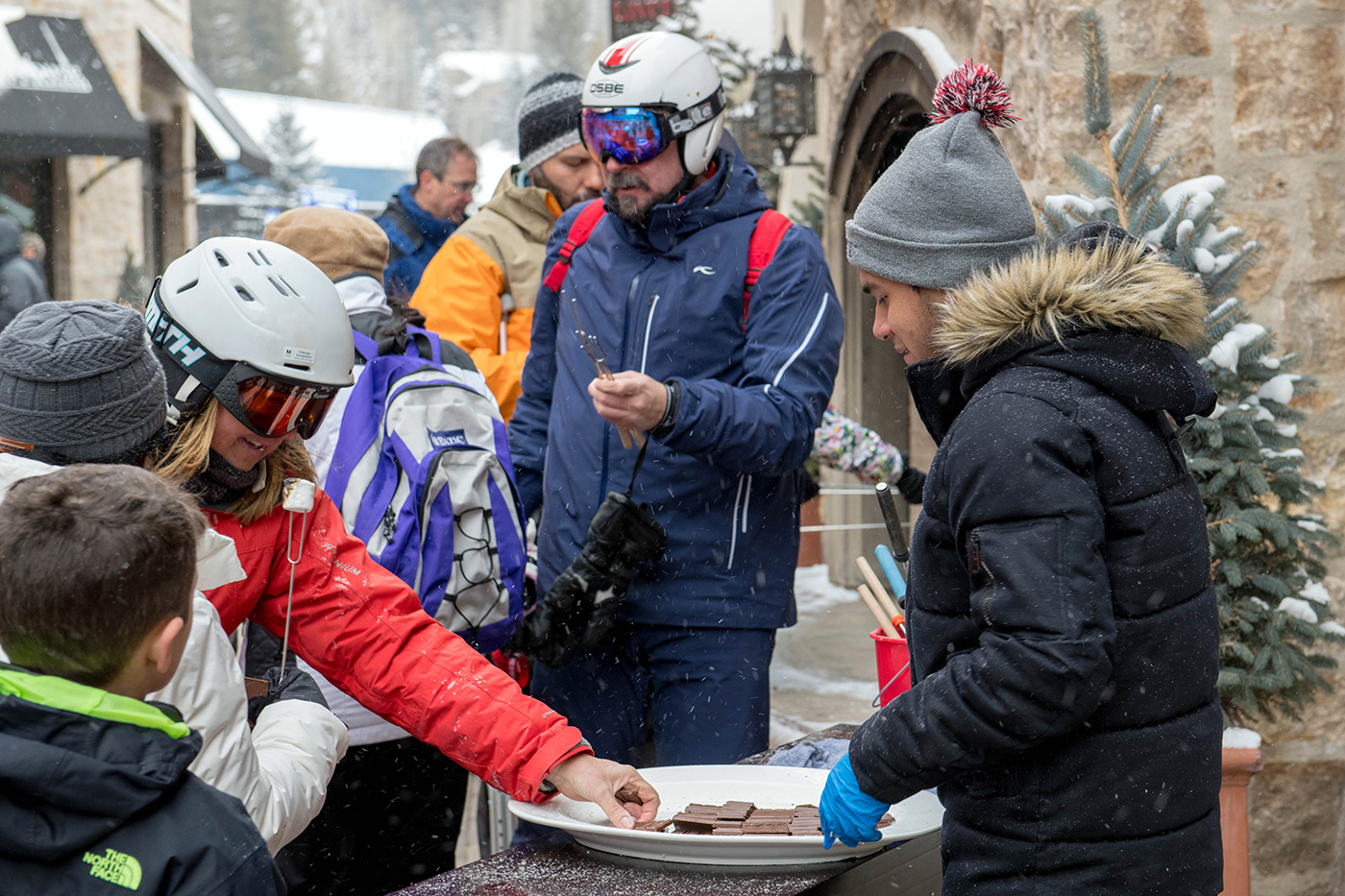 Although most things at Vail are expensive, you can cook your own Smores for free after the slopes close. Photo by M. Scott Smith.

Vail really is all of the things, and by definition is a world-class resort. The scale and scope of Vail attract skiers and jetsetters from around the world. In fact, I probably heard over a dozen languages being spoken during my day there. 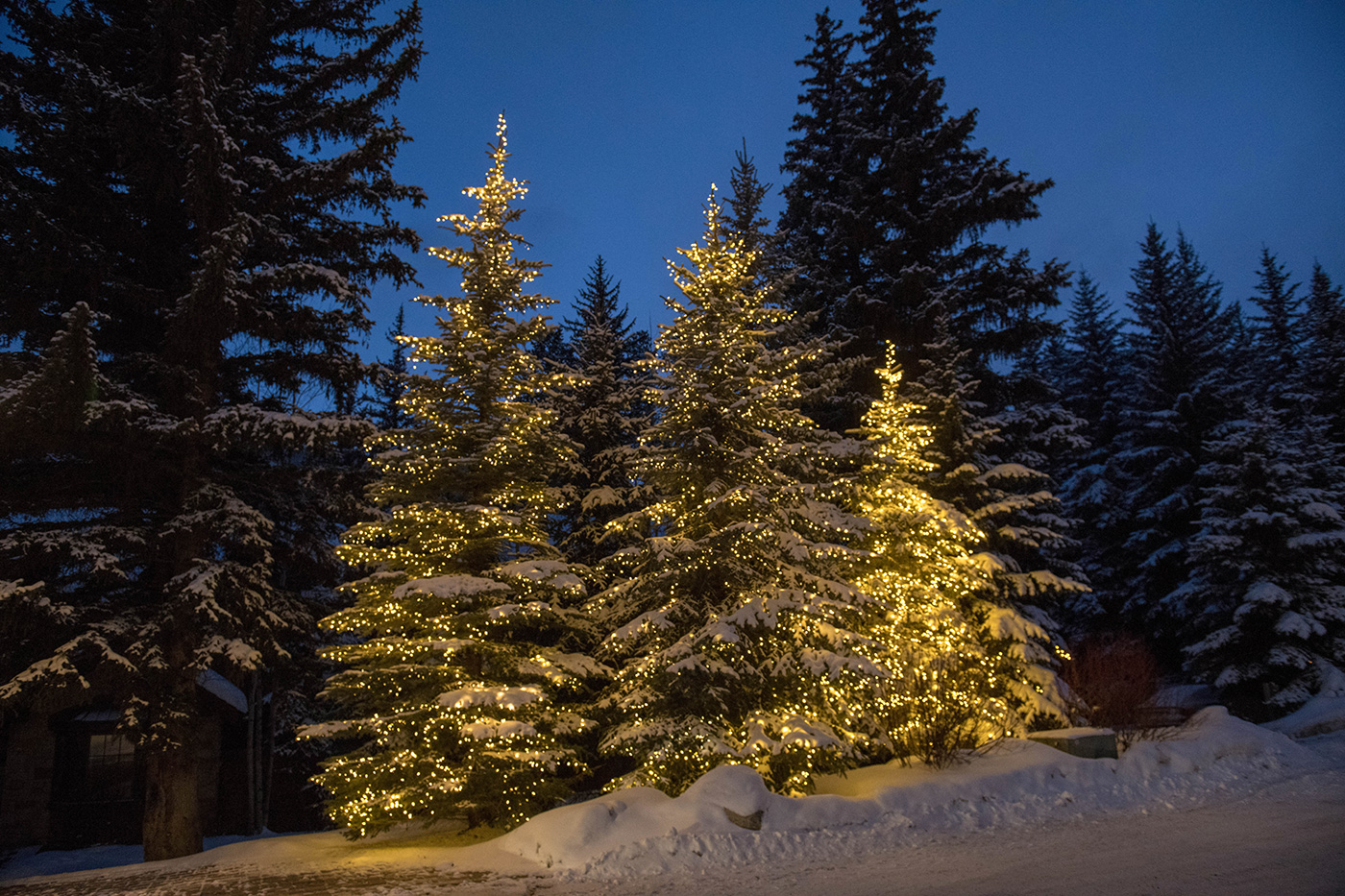 Vail has a Christmas feel to it all winter long. Photo by M. Scott Smith.

It is not a budget resort. While the going rate for a hamburger, fries, and soda at most ski areas is around $20, you can expect to pay more than $30 at the mountaintop Two Elk Lodge. (But, as a nice touch, someone greets you with a box of tissues as you enter the lodge.) Luxury hotels including the Four Seasons and the Ritz Carlton are happy to offer you rooms at rates that start well above a thousand dollars a night. (Those rates include a ski butler who will meet you on the slopes at the end of the day to haul away your gear, so there’s that.) And if you walk up to the ticket window to buy a 1-day pass, you’ll be parting with $199 of your hard-earned cash. You get the definite sense that many skiers at Vail are not finance-constrained.

But, there are ways to make a visit to Vail more economical.

Like me, you can stay in nearby towns such as Glenwood Springs. You can brownbag lunches. And while a 1-day lift ticket is expensive, you probably don’t want to ski at Vail for just one day. Prices start to go down as more days are added. And it quickly becomes economical to purchase an Epic Pass, which comes in multiple versions and can include skiing benefits at nearby resorts. Note, however, that Epic Passes are not on sale through the entire season, so you’ll need to do some advance planning. If you’re active duty military or a veteran, you’ll definitely want to check out the military Epic Passes that were just announced. 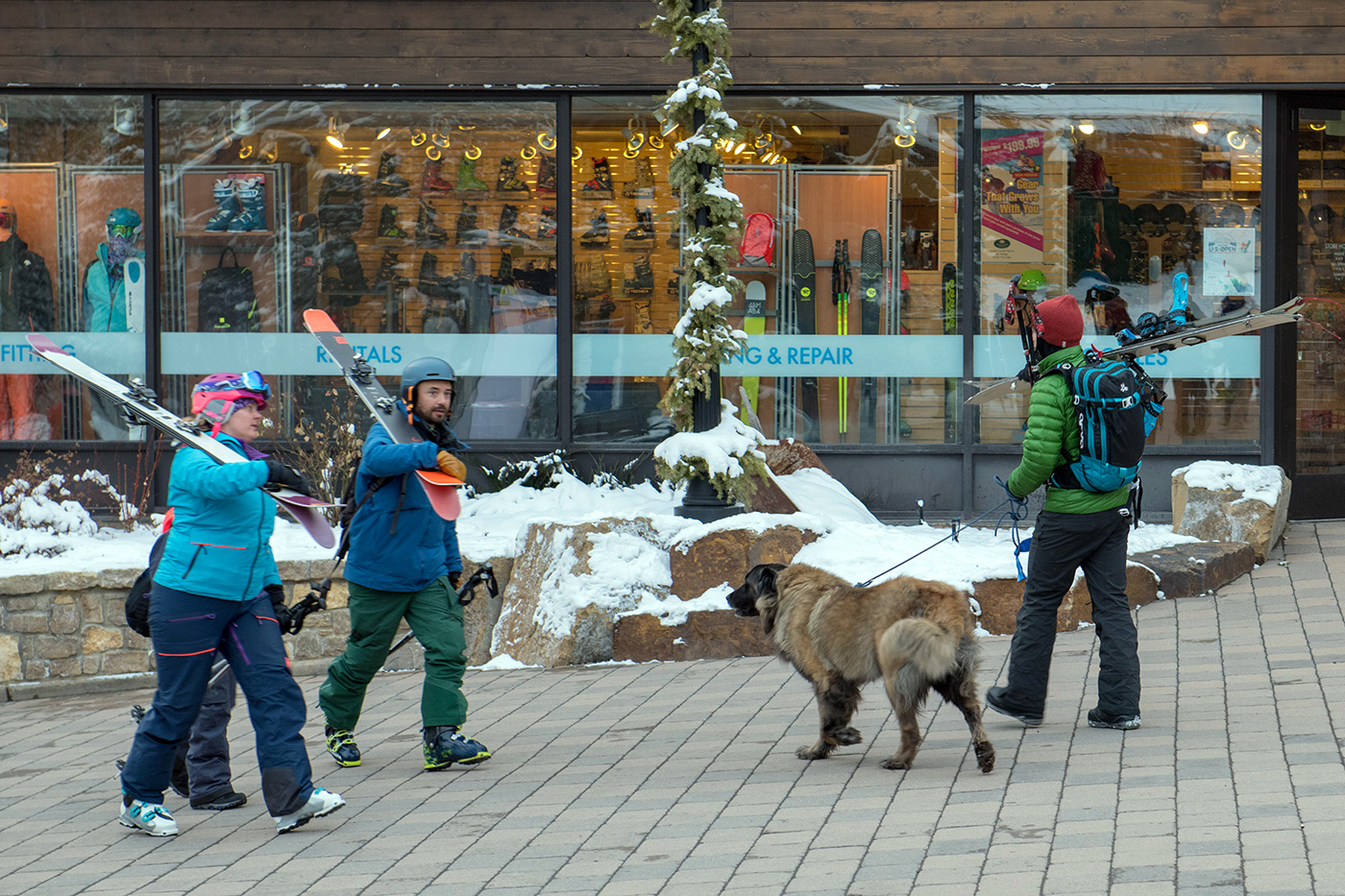 Just another day on the slopes. Photo by M. Scott Smith. 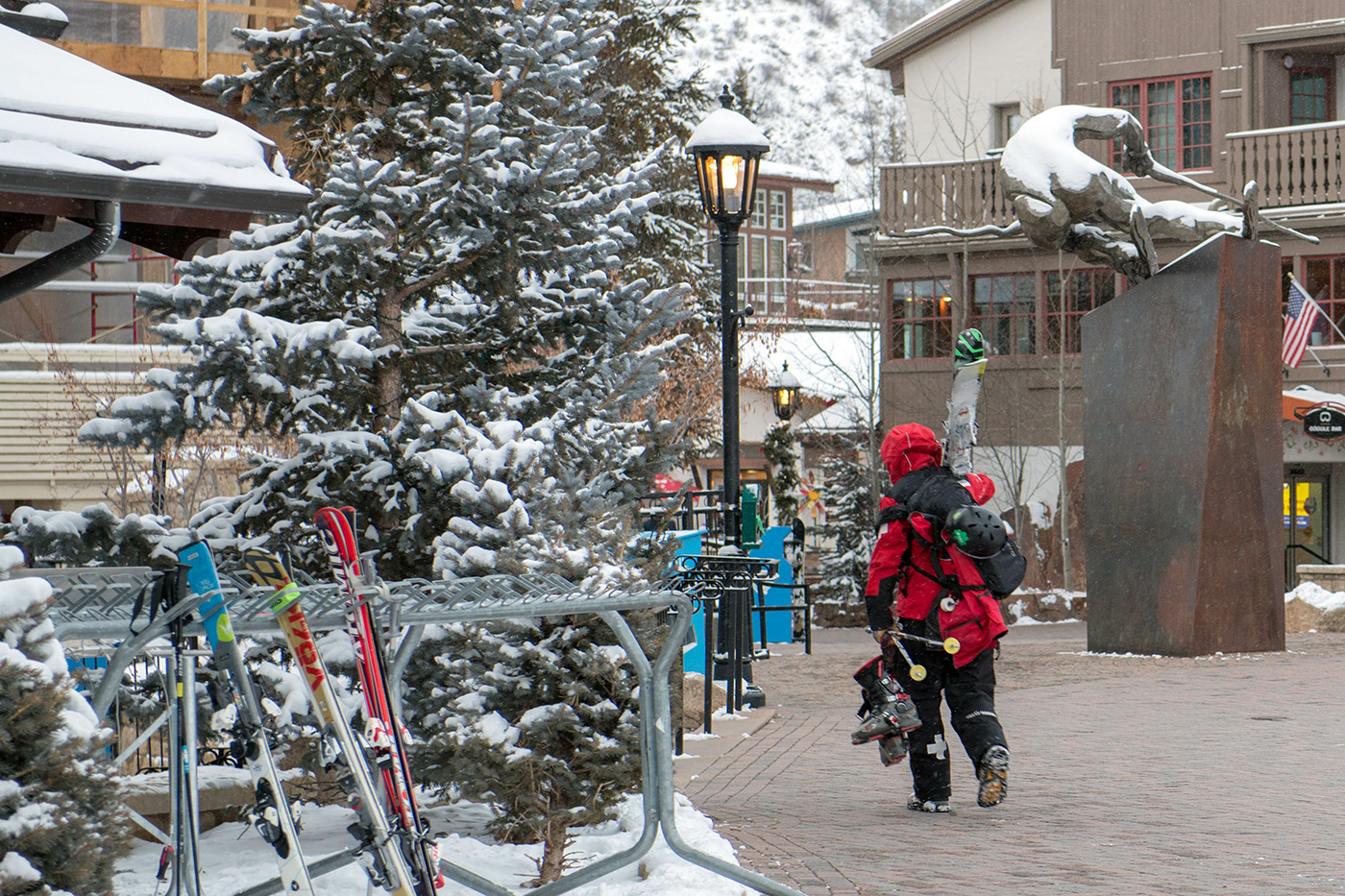 A ski patroller ends his shift after clearing runs at the end of the day. Photo by M. Scott Smith. 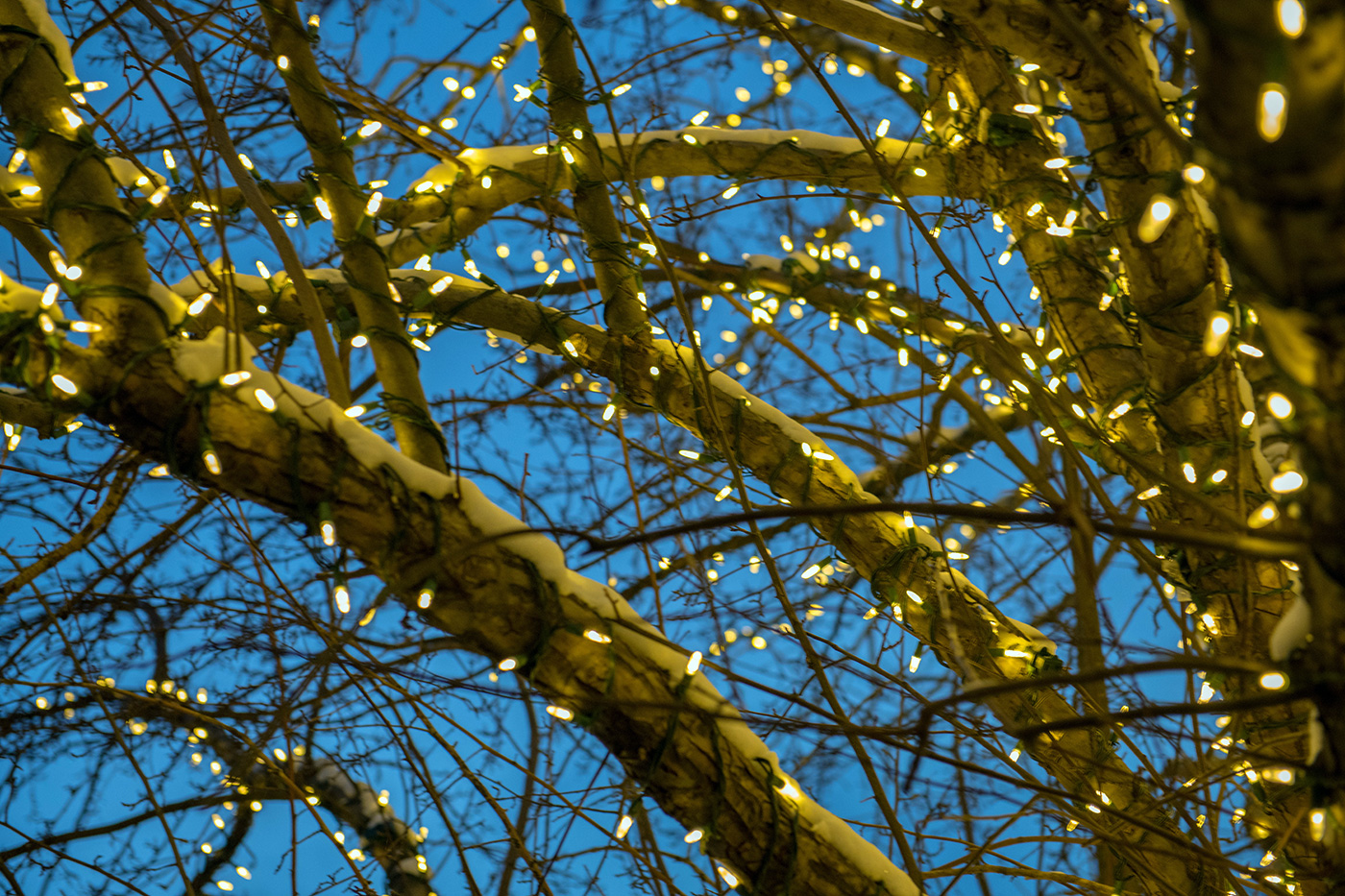 The entire town of Vail seems to glitter. Photo by M. Scott Smith.

Mr.Scott - but you haven't found a good hamburger in Vail ???!  - actually I hate the place; over hyped and rather meh. The back bowls I don't even understand (stupid featureless wide area with crummy skiers/riders) and Dragon's Teeth looked like a good place to get a core-shot. Plus I had to walk 4-ever to get to the center village while putting significant wear on my ski boots. The drive is horrible and you get to look forward to the drive back down to Denver which is crappy.

Too bad you didn't check out Steamboat - waaay better and I highly recommend Rabbit Ears Motel. That place is the real-deal  with a nice view of the Yampa River. So cool ... Hot spring is outstanding. Really great dinning - Vaquero's is great authentic Mexican and the have HUGE 32oz Margaritas ! Also Low Country Kitchen is a gastro-winner but make reservations on OpenTable it is very popular - they have Boiled Penuts!!!

Or try Breckenridge - great vibe and cool town and great skiing - we considered buying a little place right on French Creek.  Downtown Breck is a big fav with our gang. Salt Creek Steakhouse was a big hit - great char on that beef and actually their chicken schnitz was way good.