DCSki’s Editor is in the midst of a road trip through western states, in search of snow and adventure. After skiing at Jackson Hole and snowmobiling at Yellowstone National Park, he pointed his car south and headed to Colorado.

It wasn’t the fault of Aspen Snowmass Resort, which rises 12,510 feet above sea level in a beautiful part of Colorado.

It was the fault of two things: the calendar and Mother Nature.

Presidents’ Day Weekend is typically one of the most crowded ski weekends of the year. The three-day weekend is smack dab in the middle of prime season for ski areas, and this year, after being very stingy with natural snow, Mother Nature had delivered plenty of fresh snow to Colorado ski areas in the days leading up to the holiday weekend. A lot of Colorado natives had been itching to ski powder, and they flocked from all corners of the state to Snowmass and nearby areas. 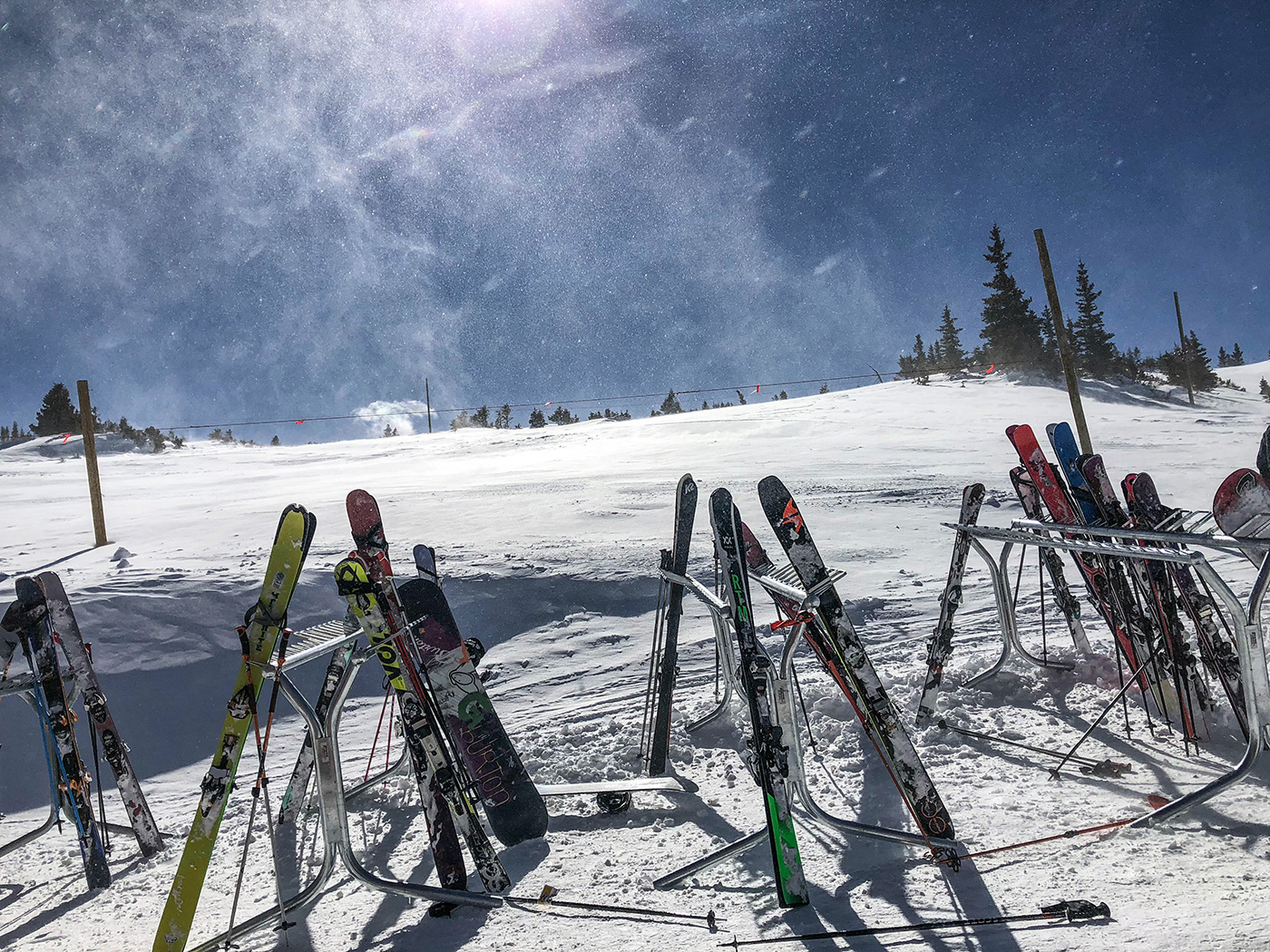 Wind at the top of Big Burn. Photo by M. Scott Smith.

But Mother Nature has a sense of irony. After delivering the goods in the form of fresh snow, she decided to deliver the wind. As I pulled up to the free Rodeo parking lot (now called Town Park Station, but all the locals still refer to it as the Rodeo lot, because rodeos are held there in the summer), I could see clouds of snow being lifted off the top of Snowmass Mountain.

A parking attendant pointed up to the mountain and said “it’s windy up there today. A lot of the lifts are on a wind hold but a couple have opened.”

As I unpacked my ski gear, he also pointed to the ground and said “I can’t believe there’s mud here in February. This lot should be covered with packed snow.” Although there was fresh snow, the snowfall totals in Colorado were still way down compared to typical years. 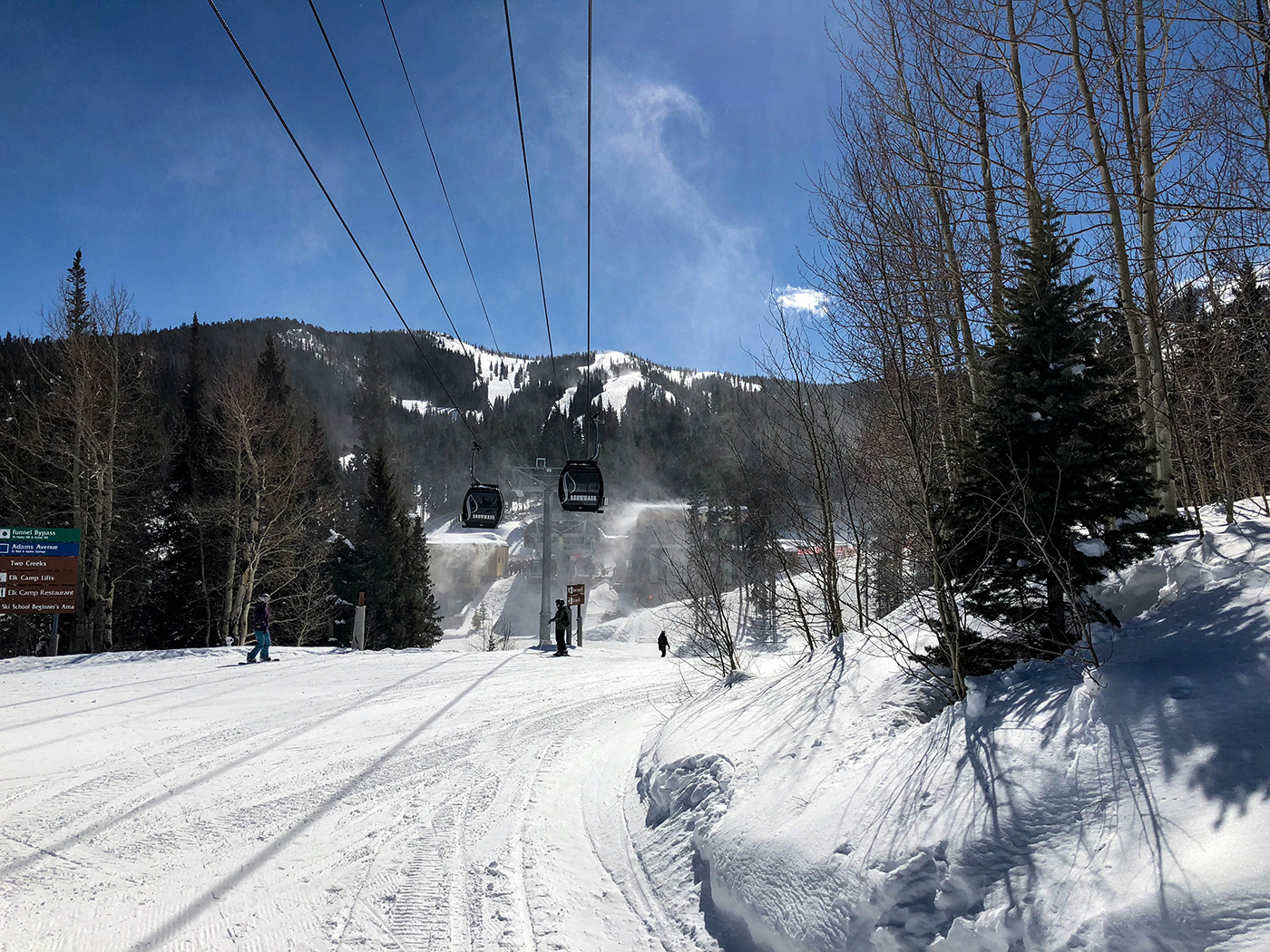 Wind gusts lifted snow right off the slopes and into the air, while shutting down many upper-mountain lifts. Photo by M. Scott Smith.

I took the shuttle to the base area and as soon as I arrived at the base, there were mobs of people. Seriously — I’ve never seen lift lines so long. The line for the Elk Camp Gondola snaked through the main village area. It took quite some time to get through it.

The gondola itself was running much slower than normal, due to the heavy winds. Lift attendants packed each gondola to capacity, so it was a long, cramped ride to the top.

Higher-mountain lifts such as Elk Camp and High Alpine were shut down, effectively ruling out the top half of the mountain — which only exacerbated the crowds. I heard a rumor that Sheer Bliss had opened up, so began to work myself over to the right side of the mountain. That meant taking Alpine Springs — a mid-mountain lift that normally would have little to no lift line. Not today. 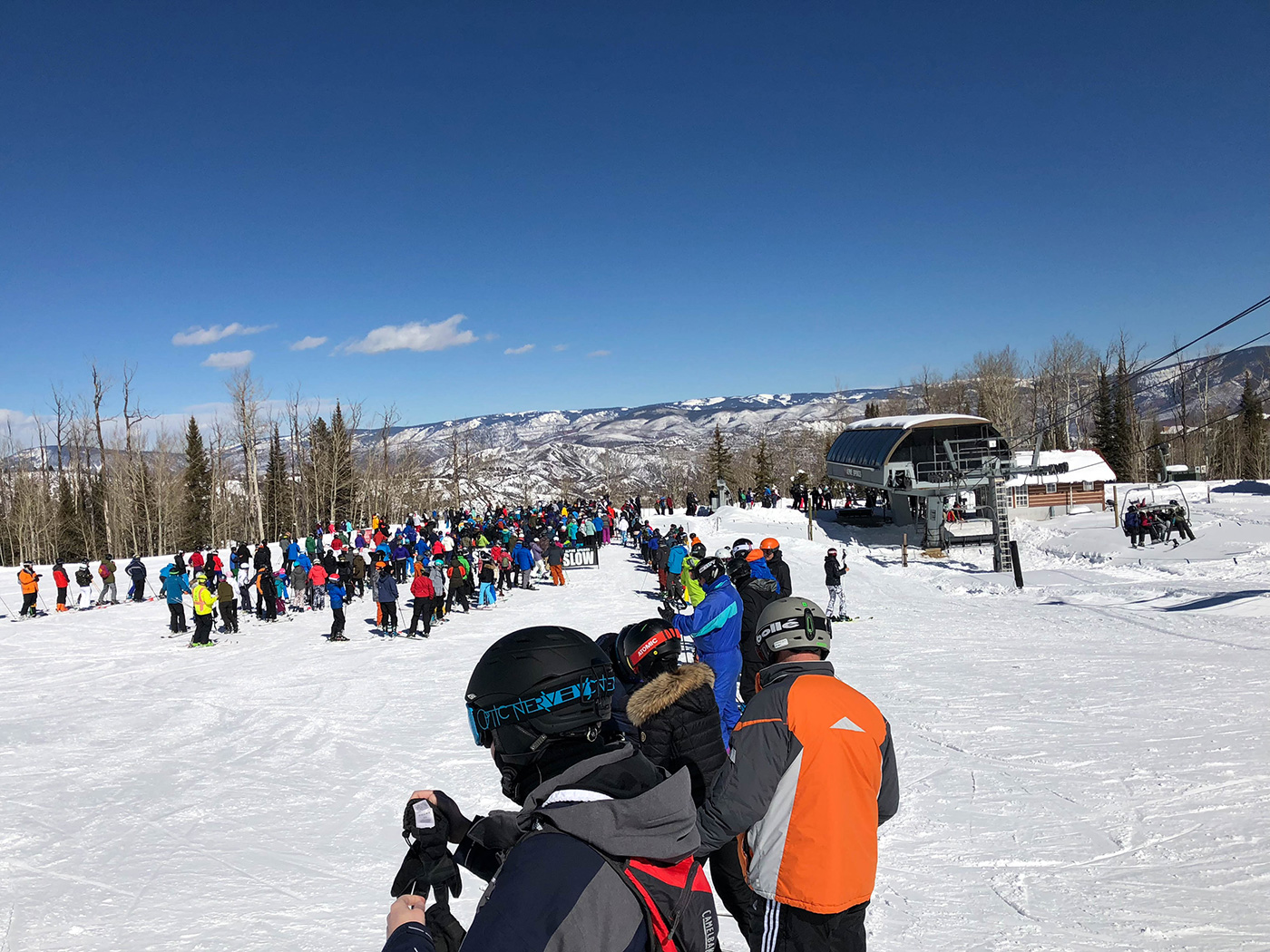 It took about half an hour to make it through the Singles line. A skier standing behind me, who lived nearby, joked “I should just go home and drink beer.”

I made it over to the Sheer Bliss lift literally one minute too late — as I skied up to the lift, the attendants started to block the lift off. “We’re shutting down due to wind,” an attendant said, apologetically. “Big Burn lift will probably be shutting down any minute now, too,” he said.

I rushed over to the Big Burn lift and was happy to see it was still running. I boarded the lift, and soon began to appreciate that a lift unsheltered from trees in biting cold, gale-force winds is not a pleasant place to be. And because of the wind, the lift wasn’t running at high-speed.

It was a slow, frigid ride to the top of Big Burn. I couldn’t feel my nose, toes, fingers or cheeks by the time I got to the top.

I warmed up for a few minutes in the Up 4 Pizza mountain-top restaurant, and then started to ski down Sneaky’s.

It was too cold and windy to be fun, even though the snow was in perfect condition under a blue sky.

The base area was mobbed with people so the lower-elevation slopes — sheltered somewhat from the wind — were essentially off-limits.

Instead, I headed over to the Two Creeks area and did laps. The Two Creeks lift line was never unmanageable and it wasn’t as windy on that side of the mountain.

It was a bit disheartening — here I was at a phenomenal ski resort, but because of the cold, wind, and crowds, I felt like I couldn’t ski it.

A redo was in order.

So, several days later, I had a chance to revisit Snowmass, on Thursday, February 22. And conditions were dramatically different: gone were the crowds and lift lines. I rarely waited in a single lift line. The fierce winds were gone, but they had been replaced by frigid, biting cold temperatures, that sent me scurrying into a ski shop at the base of Two Elks to buy a Turtle Fur balaclava. Light snow fell much of the day, freshening up what was already excellent surface conditions. 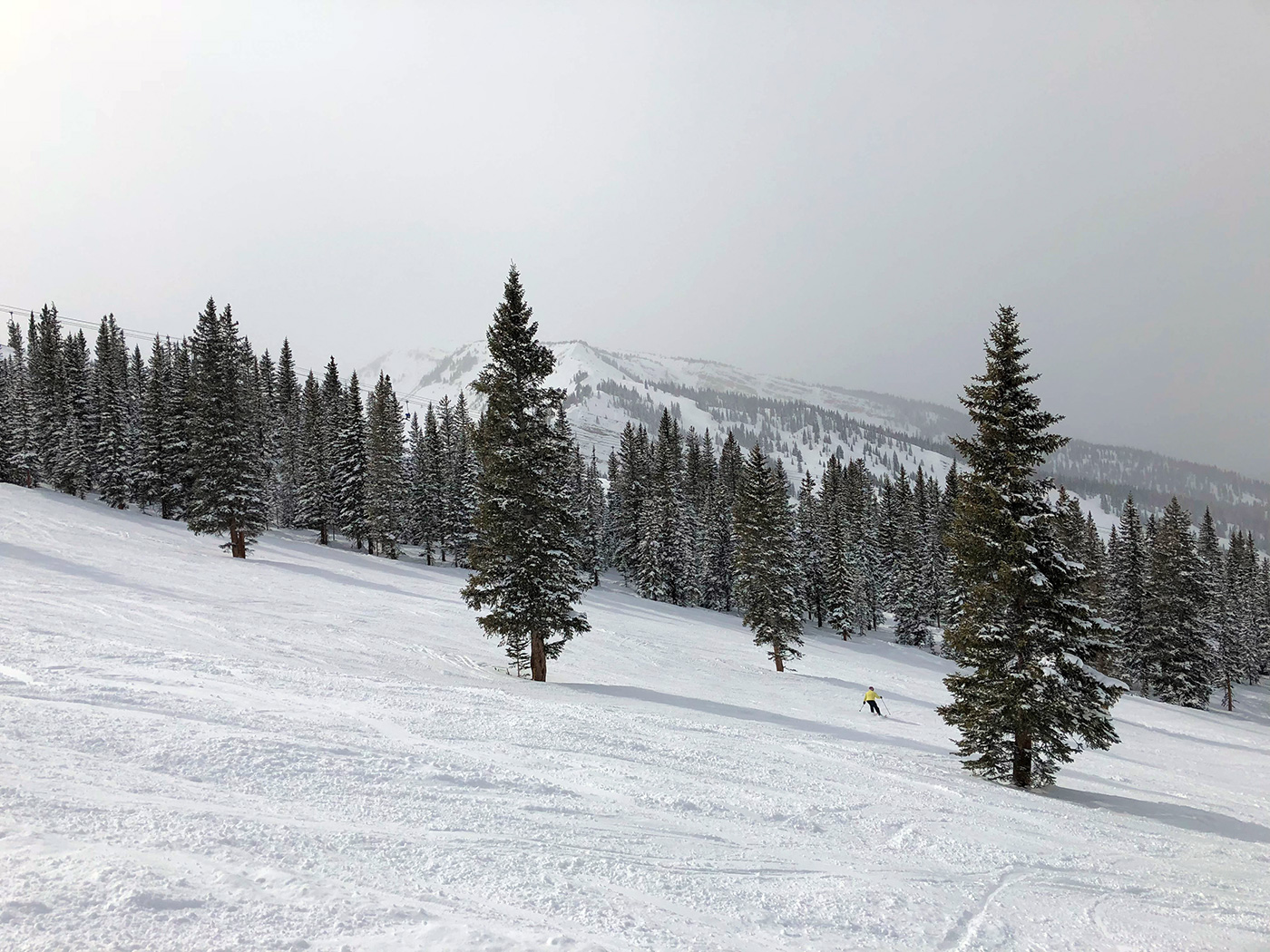 I finally had a chance to truly experience Snowmass, and although I only had a day to ski, I bounced around the mountain trying out various areas. I enjoyed skiing through the trees near the top of Big Burn, and occasionally testing my legs on moguls throughout the resort.

One word comes to mind with respect to Snowmass: variety.

I spoke with a ski instructor on a gondola ride, and she said that was Snowmass’s strength.

Snowmass is one of four Aspen-owned mountains that are located nearby and share a lift ticket. Aspen Mountain — often referred to as Ajax by locals — is perhaps the most famous. Steep and rising from an iconic town at the base, Aspen is a place to see and be seen — a favorite of celebrities and stars.

Buttermilk is a more muted affair: known for its beginner terrain and uncrowded slopes, it’s a great family mountain and a good place to learn. Aspen Highlands, on the other hand, is known for its steeper terrain.

All of those areas have their strengths, but Snowmass has it all. The ski instructor told me that if you just have one day, that day should be spent at Snowmass.

“It’s a huge mountain,” she explained.

Indeed, Snowmass has the highest lift-served vertical in the United States, although getting to the upper reaches (known as the Cirque — and topping out at an elevation of 12,510 feet) requires a ride on a Poma lift. The total vertical at Snowmass is 4,406 feet. Skiable acres is 3,332. Snowmass is a big mountain, and across those acres is terrain for everyone. You could spend a week (or three) at Snowmass and still discover new trails. 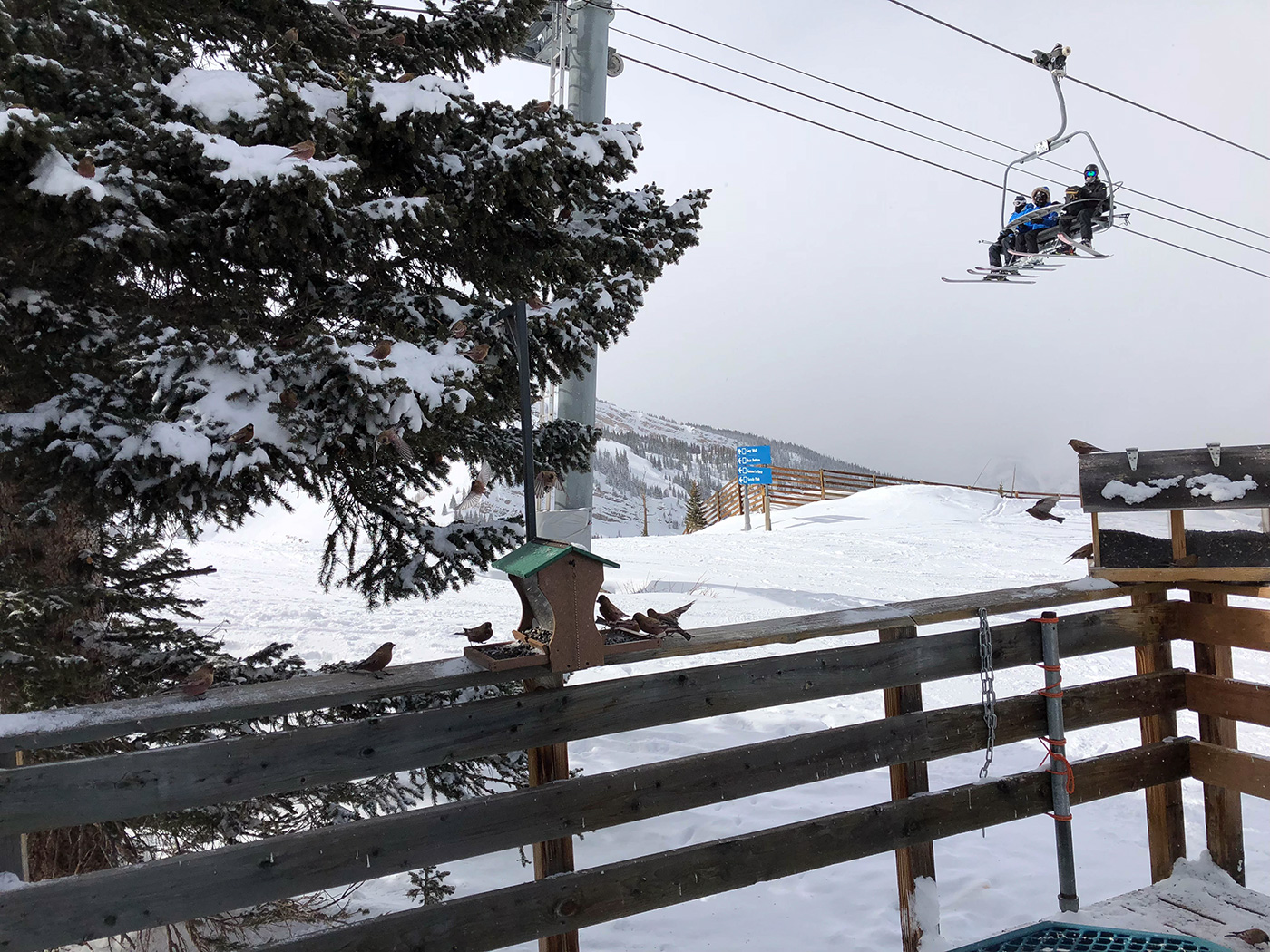 Birds feed at the Wildlife Center at the top of Elk Camp. Photo by M. Scott Smith.

After spending a few days skiing at Sun Valley and Jackson Hole — which are known for their steeps — many of the intermediates at Snowmass felt like bunny slopes. One thing I really like about Snowmass is that the trails are interesting — they don’t have a consistent pitch. They rock and roll like a roller coaster, with interesting fall lines. Some steep pitches give way to gentle cruisers, only to become steep again.

I found the main base area at Snowmass to be a bit chaotic. It doesn’t have the same Disney feel as Vail or Beaver Creek, or the authentic Colorado town feel of Crested Butte. The Snowmass Mall area of the base is just uphill from the main base area; a very short gondola ride called Sky Cab will get you there, but it’s a slow ride, as it crawls along a couple times on the way up as clusters of gondolas load or unload.

While Snowmass doesn’t have an elaborately-designed base area, it does have lots of slopeside or almost-slopeside lodging, so there are many options for staying near the resort.

I’m glad I revisited Snowmass, as that got me closer to experience the true potential of the resort. If the temperature were a few degrees warmer on my second day there, it would have been sheer bliss. 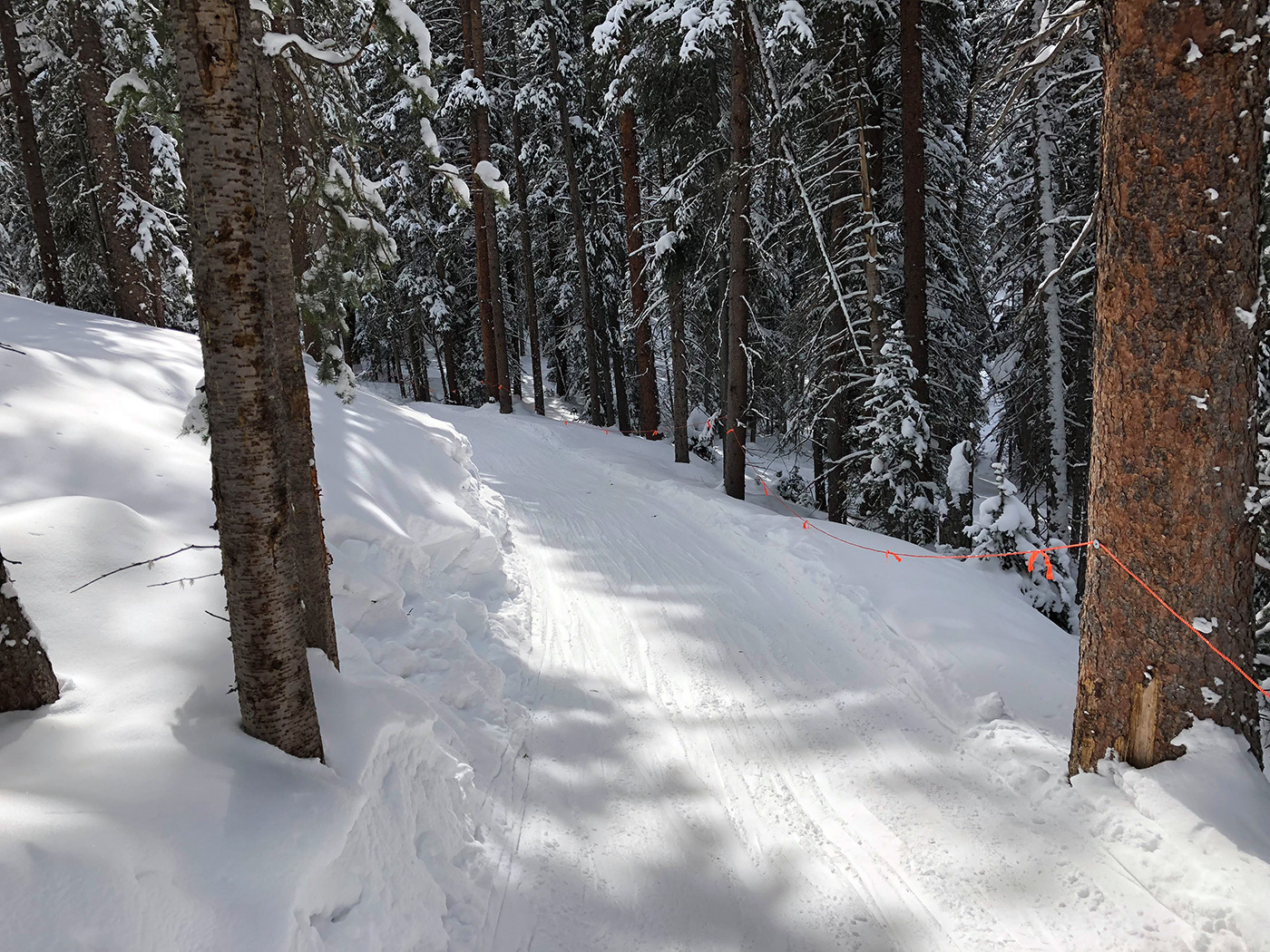 Prospector Trail is geared towards kids and wanders through the trees. Photo by M. Scott Smith.

Thanks for sharing.  Interesting report on crowds.  I believe Snowmass is generally the busiest of the Aspen mountains, but usually the Aspen areas including Snowmass are renowned for being less crowded than many major CO resorts closer to Denver.  The lift closures and holiday combination gave you a different experience. Glad you got a second day.

PS:  I think there is an error in your publish date at top of article, says Feb 28.