DCSki’s Editor is in the midst of a road trip through western states, in search of snow and adventure. When he last checked in, he was making turns at Idaho’s Sun Valley Resort. He now checks in from the town of Jackson, Wyoming. 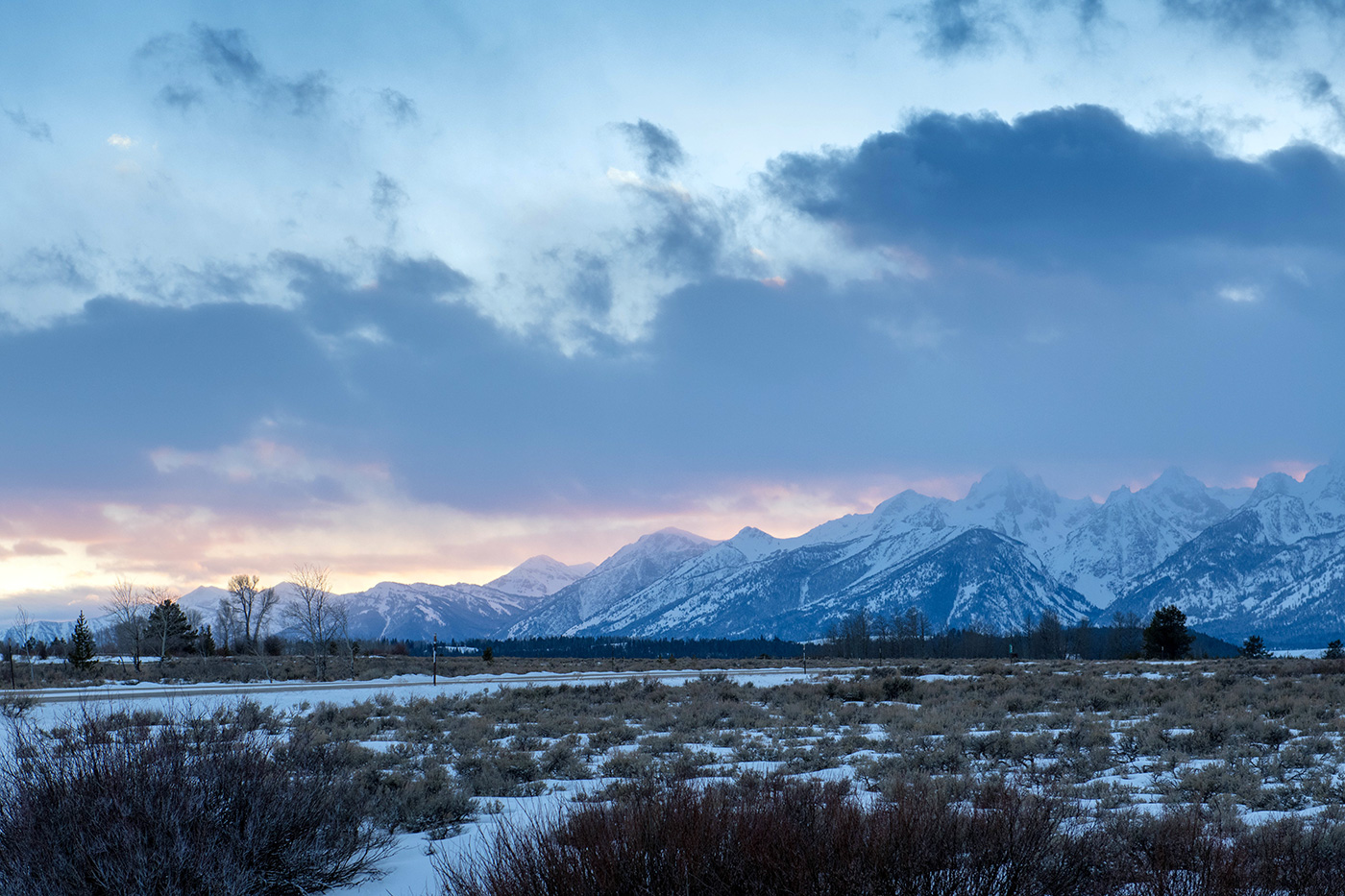 The Grand Tetons in Wyoming. Photo by M. Scott Smith.

They have a saying in Wyoming: if you don’t like the weather, wait 5 minutes.

Actually, I’ve heard this saying used many places: Colorado. The midwest. Even back home in Maryland. The phrase may have first been used by Samuel Clemens (a.k.a. Mark Twain) in describing New England weather.

Based on two days of skiing at Wyoming’s Jackson Hole Mountain Resort, I’d like to amend this saying: if you don’t like the weather, just ski over to a different part of the mountain.

Sure enough, I experienced a wide variety of weather conditions at Jackson Hole, with conditions changing from lift to lift and run to run. Within the span of 15 minutes, I saw sunny skies on one part of the mountain, while light snow fell on another. On my last day, heavy snow and winds were added to the mix at the higher elevations. 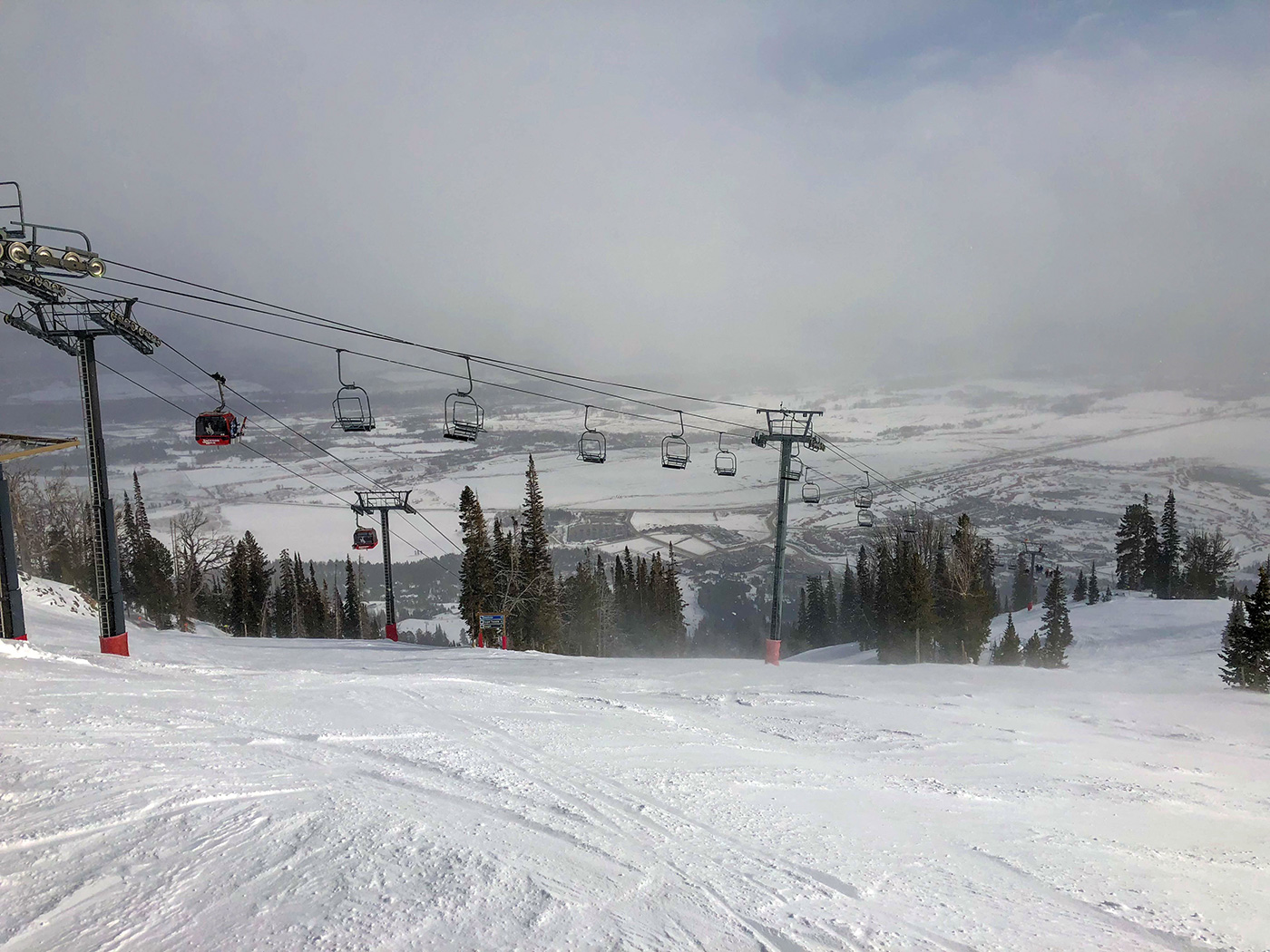 You can log some serious vertical at Jackson Hole. Photo by M. Scott Smith.

It takes a special kind of mountain to support so many concurrent weather microclimates, and Jackson Hole is just that kind of special. This is no ordinary mountain. Part of the rugged Teton mountain range (and right next door to Grand Teton National Park), Jackson Hole rises dramatically 4,139 feet above the nearly-flat Jackson valley. An infamous tram — known as “Big Red” — takes expert skiers and boarders to the resort’s 10,450-foot summit, which on a clear day has been described by many as offering one of the best mountain views in the country, if not the world. (I’ll have to take their word for it; when I arrived at the top of the mountain, I was greeted by heavy snow and no visibility.) 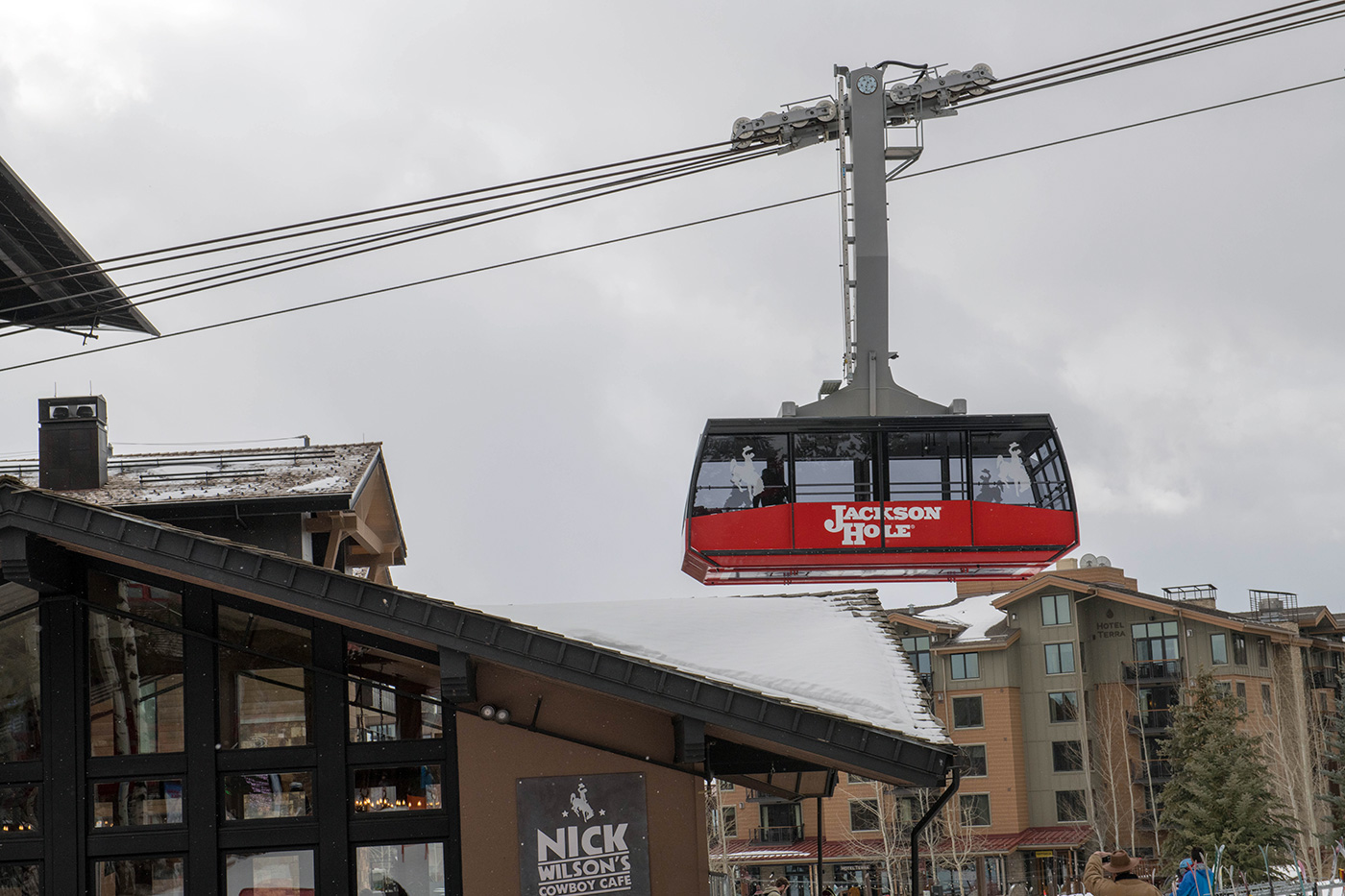 Big Red arrives at Teton Village, one of the few aerial trams in the United States. As one 100-passenger tram goes down the mountain, another goes up, meeting its twin halfway . Photo by M. Scott Smith. 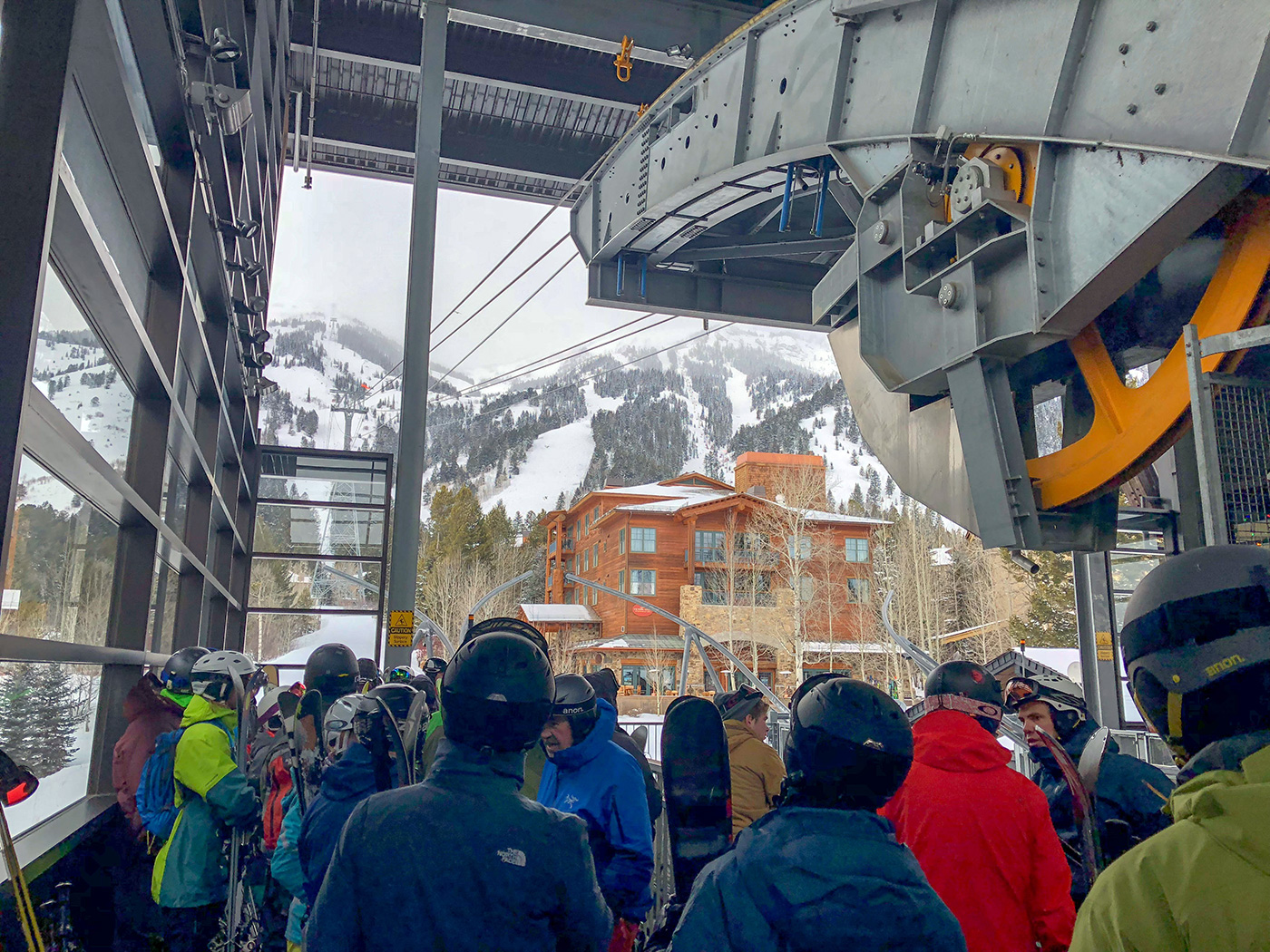 Guests queue up and wait for Big Red to arrive. On powder days, the line for the tram can be quite long. Photo by M. Scott Smith.

There are 2,500 acres of inbound terrain at Jackson Hole, and an open backcountry gate system provides access to thousands of acres of backcountry, ski-at-your-own-risk terrain. 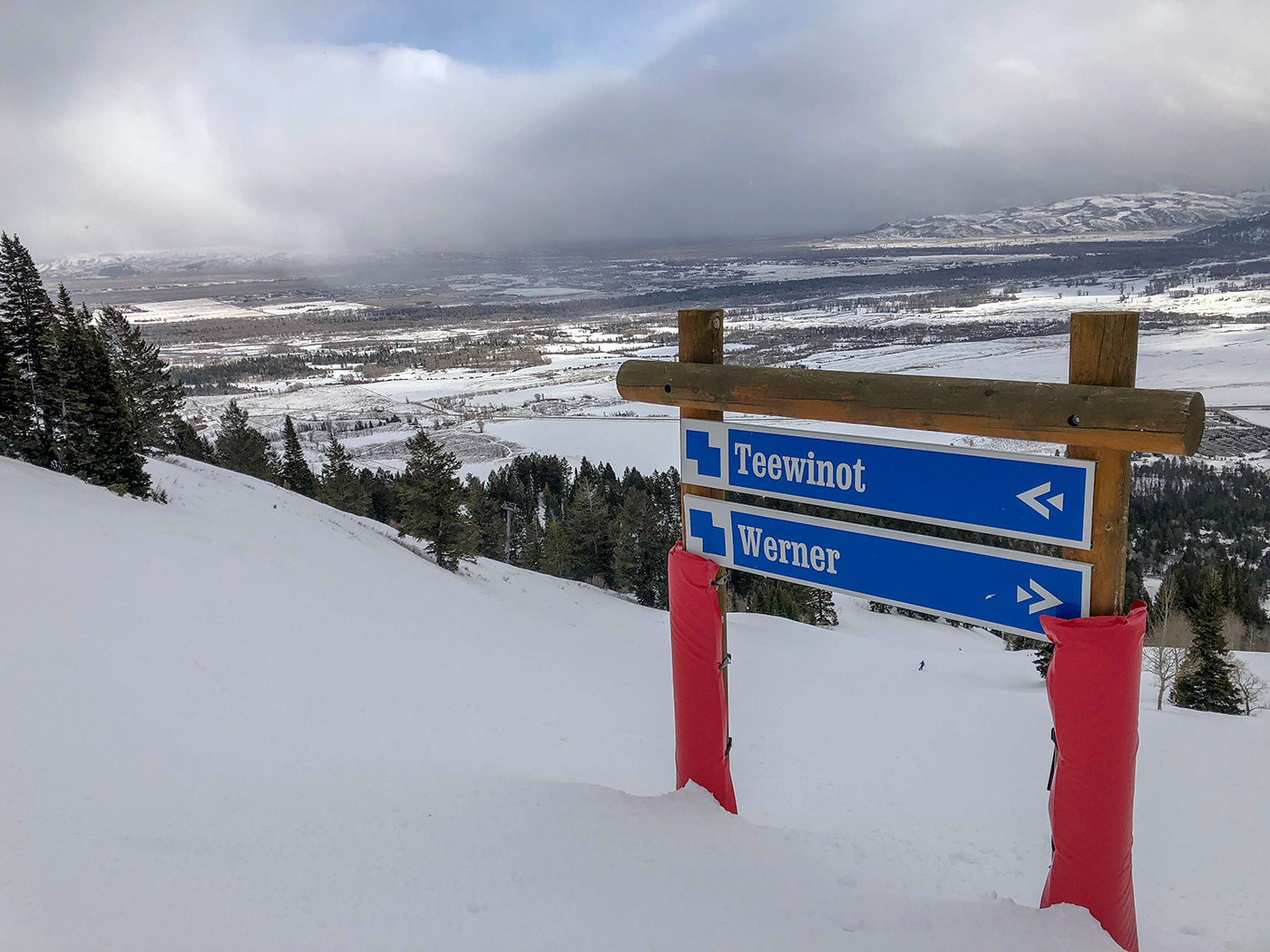 50% of terrain at Jackson Hole is rated expert (and they mean it), while 40% is rated intermediate. Photo by M. Scott Smith.

There is very little beginner terrain. The intermediate terrain at Jackson Hole would make black diamonds at lesser resorts blush. What really sets Jackson Hole apart is its expert terrain. Within bounds, you can find extreme skiing, including the legendary Corbet’s Couloir — an almost freefall experience that taxes the skill and guts of the most capable visitors.

Spoiler alert: I did not attempt Corbet’s Couloir. I passed right by it and instead skied down Rendezvous Bowl, which was in the middle of receiving 18 inches of new snow.

I generally tried to avoid skiing over cliffs, which is normally a good thing, although at Jackson Hole, experts seek out inbound cliffs to ski over.

Everywhere you look at Jackson Hole, there are expert skiers, drawn to the steep, deep powder that Jackson Hole is famous for. It’s a sight to behold. No matter how good you (think) you are, you will be humbled by everyone around you here. 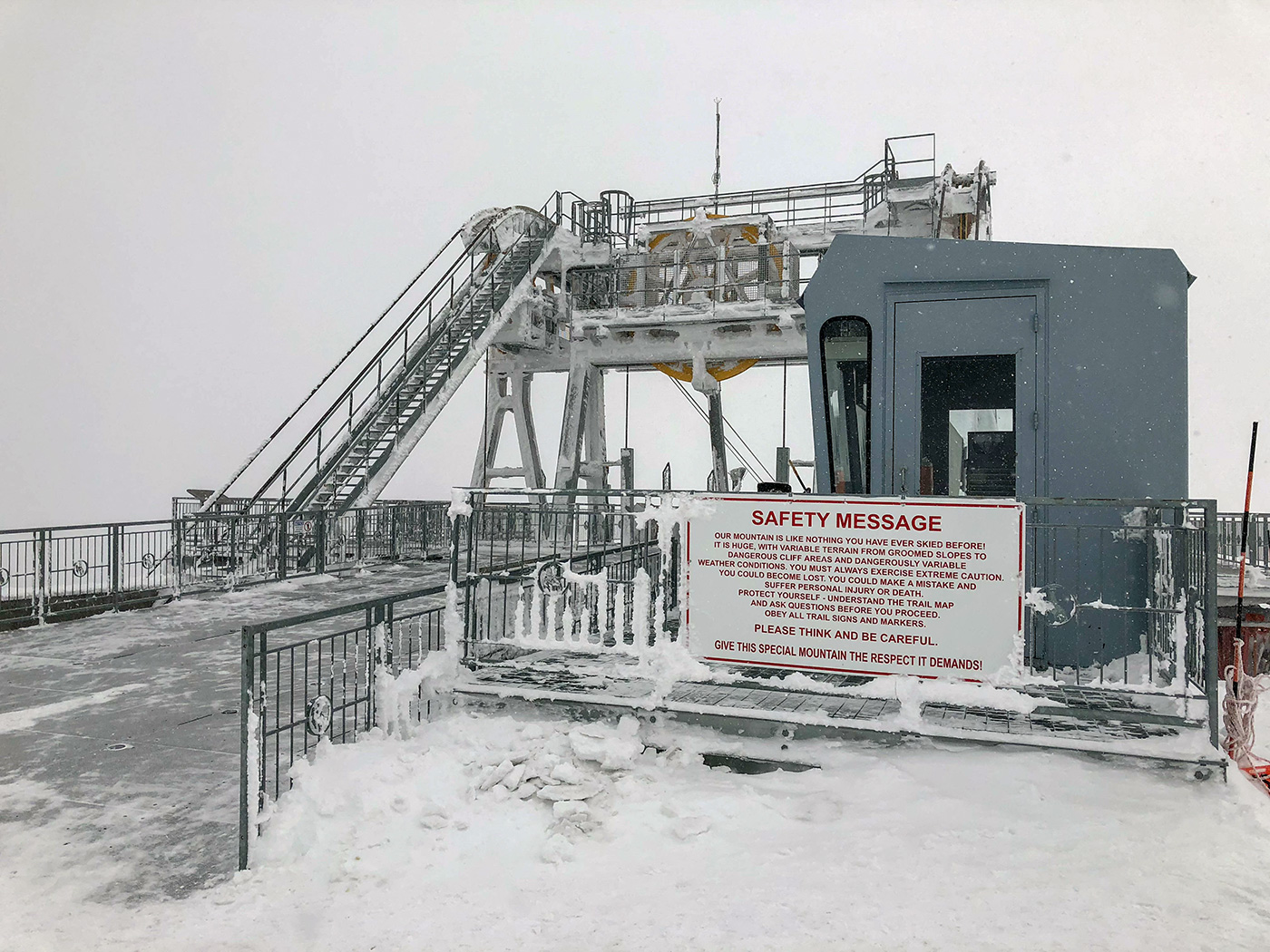 At the top of the tram is a sign that cautions skiers and boarders: “Our mountain is like nothing you have ever skied before! It is huge, with variable terrain from groomed slopes to dangerous cliff areas and dangerously variable weather conditions. You must always exercise extreme caution. You could become lost. You could make a mistake and suffer personal injury or death.”

The warning isn’t an exaggeration: Jackson Hole has a lot of intimidating terrain. You can easily take a line that takes you in way over your head, with no easy way out. This was my first trip to Jackson Hole, and although I’m an advanced skier (by East Coast standards), researching the mountain, I became concerned. Would there be enough terrain I could ski?

It turns out my concerns were overblown. While there is no question that Jackson Hole caters primarily to expert skiers, there is plenty of intermediate terrain that, while more challenging than intermediates you might find elsewhere, is perfectly accessible to competent intermediate skiers. This is helped in part by the quality of snow at Jackson Hole: Mother Nature has a tendency to drop ample amounts of fresh powder on Jackson Hole all season long. Jackson Hole has also made a strong effort to expand its intermediate options in recent years. 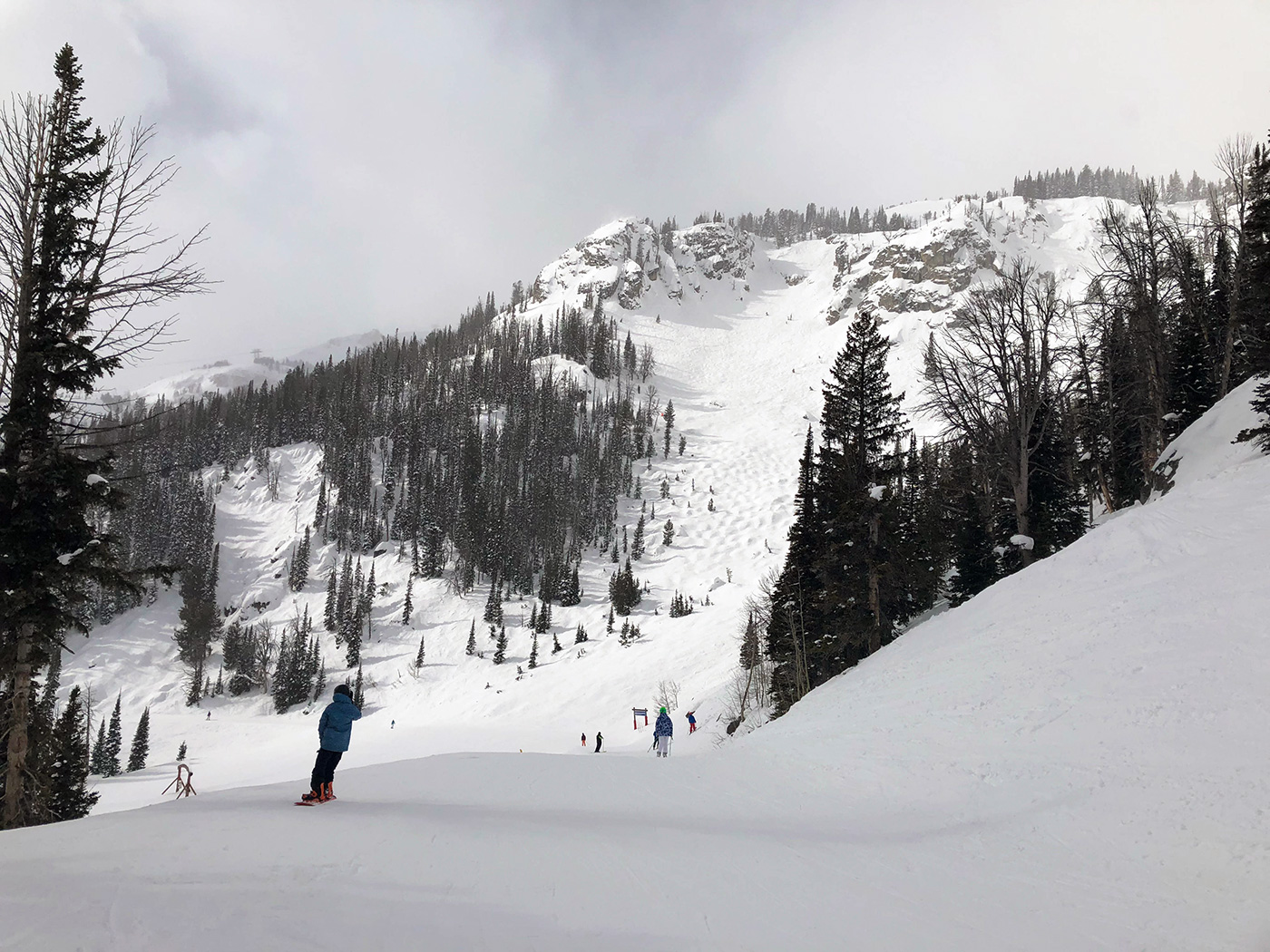 Although Jackson Hole caters to experts, solid intermediates will find plenty of terrain to keep them busy. Photo by M. Scott Smith.

While most of the west has seen historically low amounts of snowfall, Jackson Hole has fared better. So far this season, Jackson Hole has measured over 320” of snow at the top of the mountain. Conveniently, 18 inches of that arrived during my time here.

On its web site, Jackson Hole is more than happy to brag about its good snow fortune this year compared to other ski areas. Only Canada’s Whistler has Jackson Hole beat, with 362 inches of snow season-to-date. Vail has only received 121 inches. The snow gods have clearly favored Jackson Hole in this lean snow year. 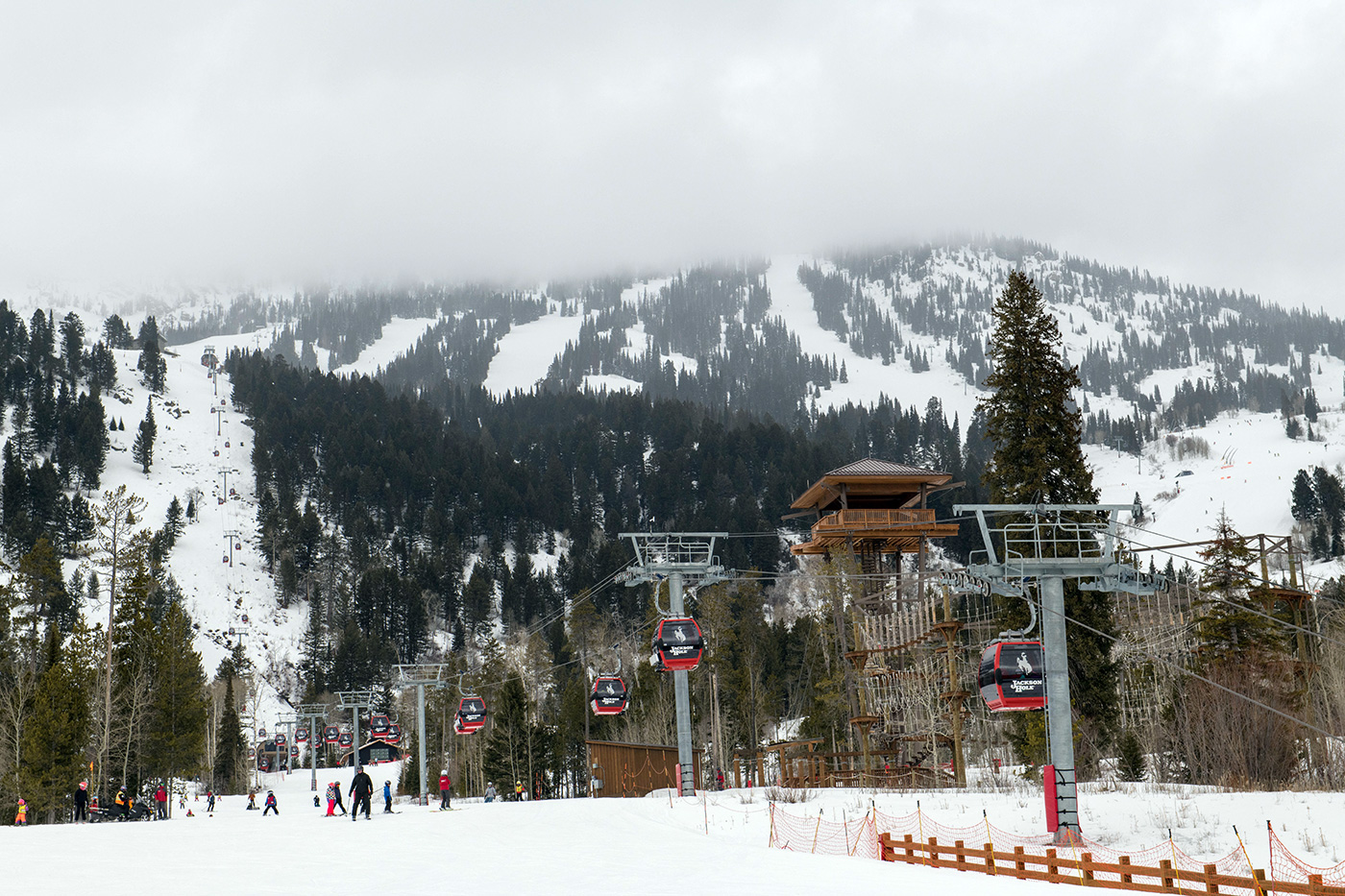 I had a blast exploring Jackson Hole’s terrain. I had to study Jackson Hole’s trail map, both to understand how to navigate around the expansive mountain as well as to ensure I didn’t end up in places I didn’t want to end up. 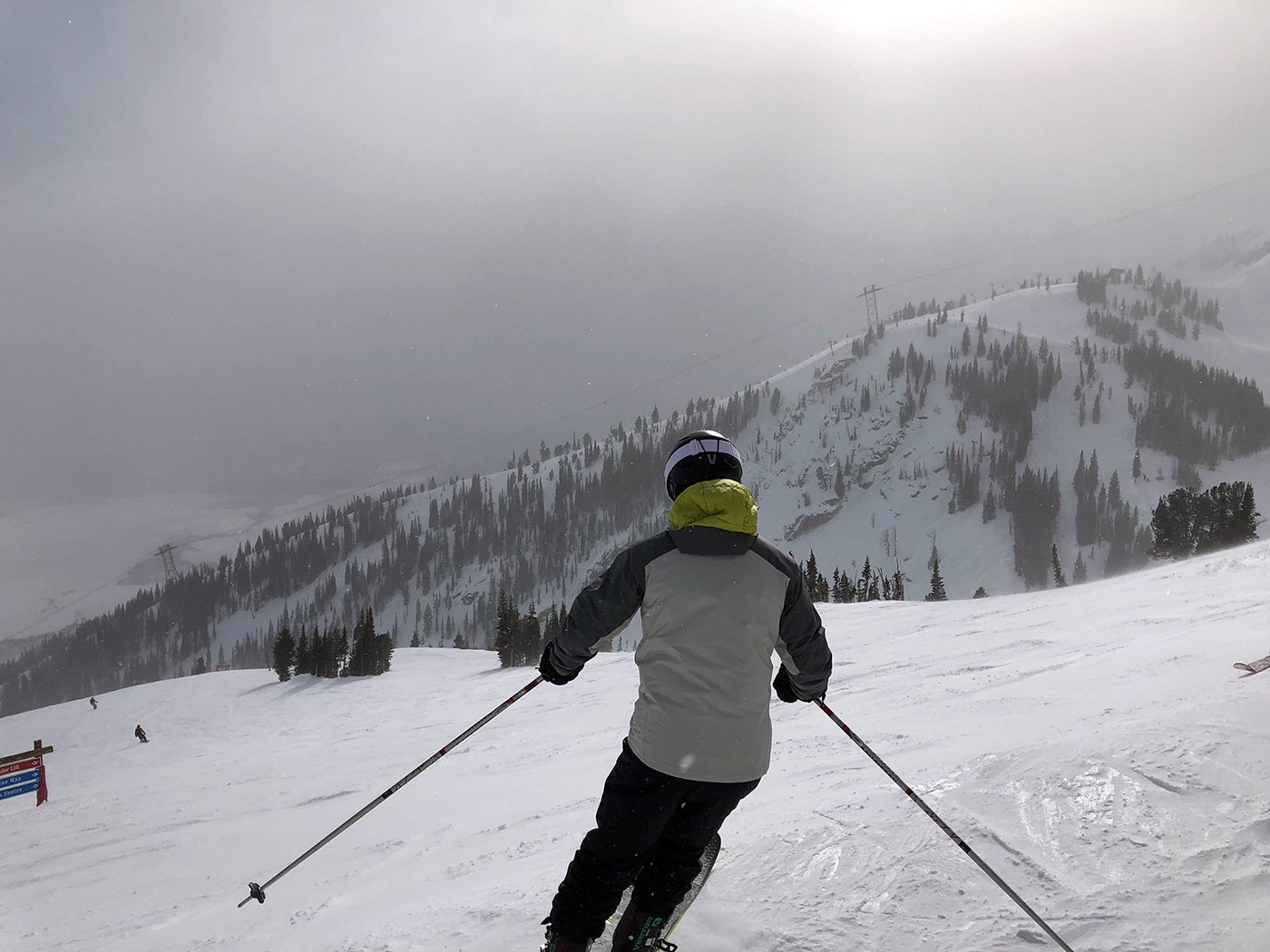 Traverses criss-cross many trails, providing a path to get from one side of the mountain to another. Photo by M. Scott Smith.

Perhaps because Jackson Hole is so steep and wide, getting from one point of the mountain to another generally requires taking a traverse. Multiple traverses criss-cross the width of the mountain, intersecting with a large number of trails. You had to be somewhat careful on the traverses each time you crossed a trail — some of which are quite steep — but Jackson Hole had good signage cautioning skiers in the more dangerous spots. 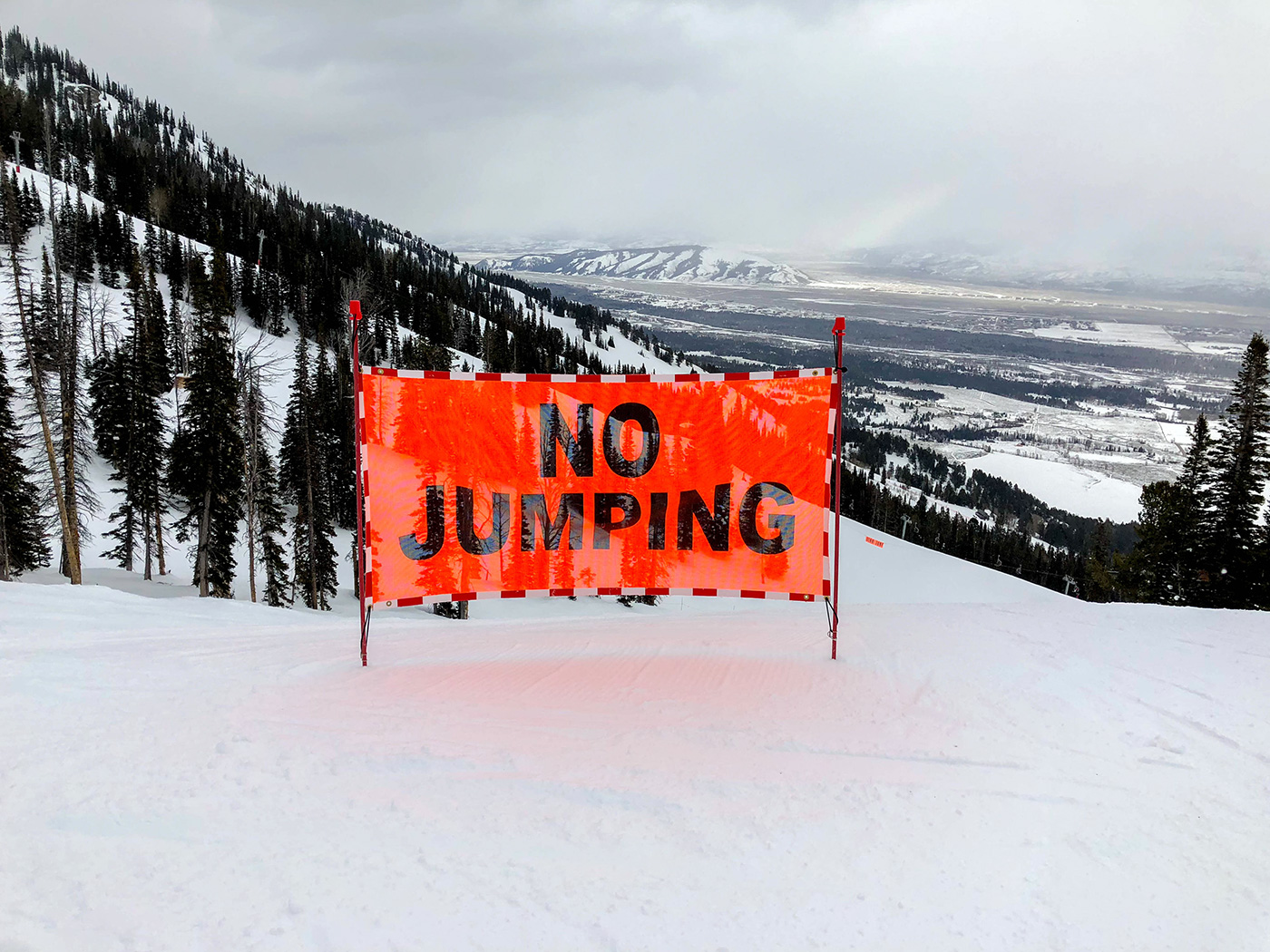 They mean it, at least on some slopes. Photo by M. Scott Smith.

I also noticed that Jackson Hole frequently had employees stationed at “slow skiing” zones throughout the mountain, giving a stern-talking-to to anyone skiing recklessly. 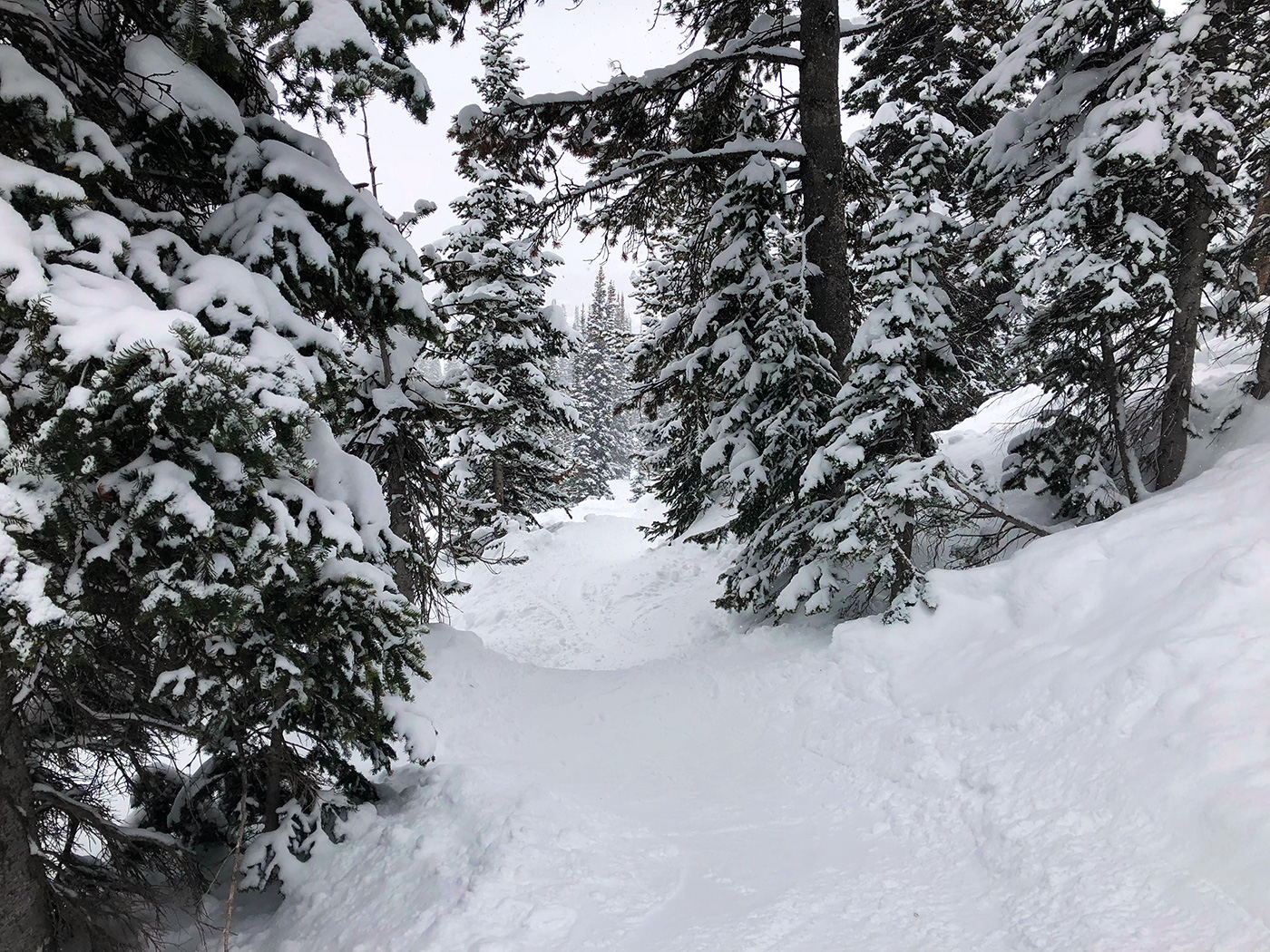 Skiing in the trees. Photo by M. Scott Smith.

Another common sight throughout the mountain was ski instructors leading groups of skiers and boarders. I don’t think I’ve ever seen so many instructors at any resort. Jackson Hole is certainly an ideal mountain to take lessons at, and if I was here longer, I would definitely do that. 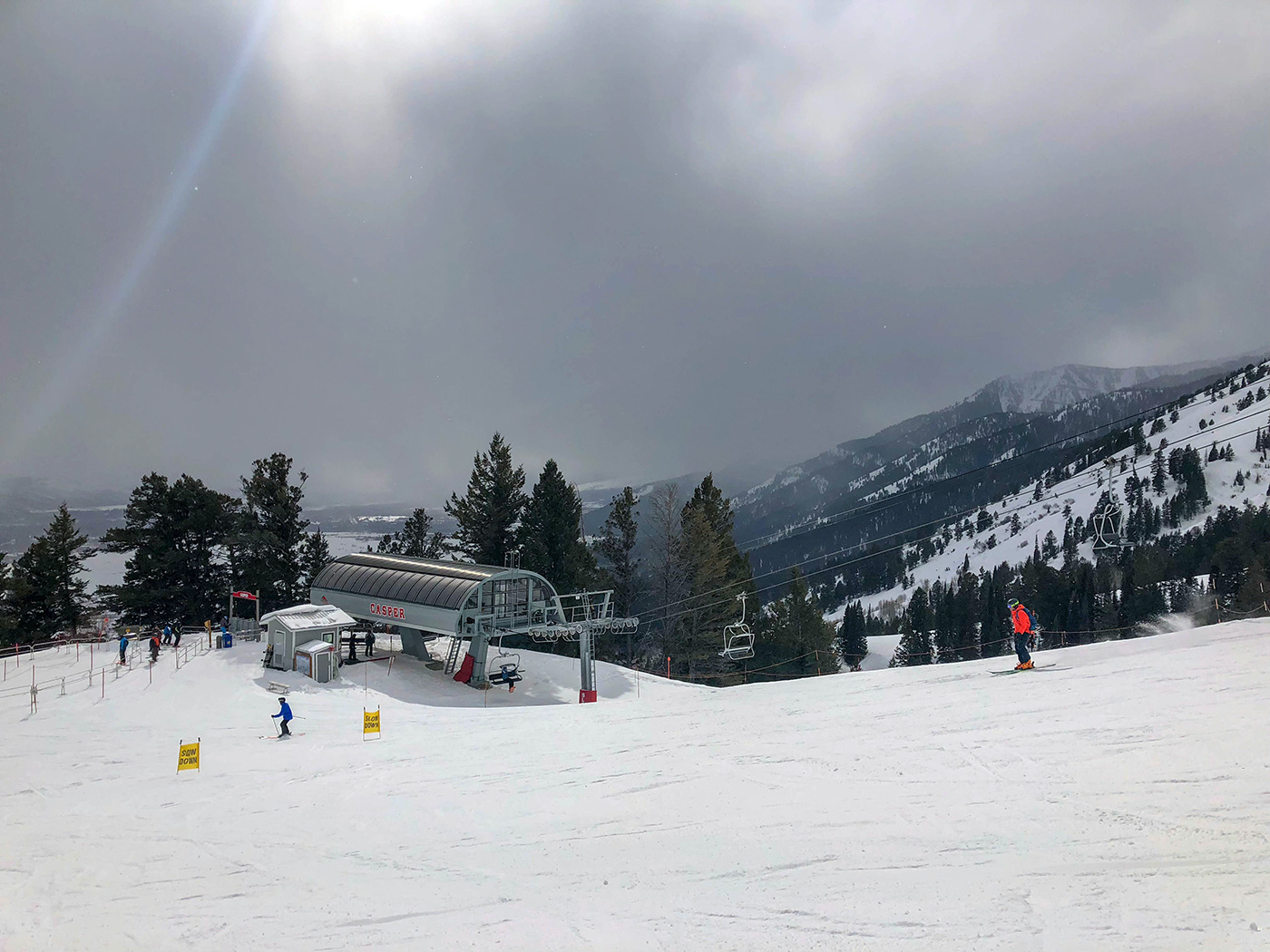 At the base of Jackson Hole is Teton Village — a collection of a few restaurants, shops, and upscale lodging options including the ritzy Four Seasons. I’ve stayed at that Four Seasons before — during the “bookend” season between fall and winter when visits are low and rates drop significantly. But rates aren’t low now, so to stay within budget I stayed in the town of Jackson, which is about 20 minutes away from Teton Village and the ski area. Jackson is a real Wyoming cowboy town, where you can find actual cowboys sitting at the bar stools next to tourists at the local watering holes. I stayed in a Hampton Inn on the edge of town, which ran about $150 per night. It was conveniently located right next to an Albertsons grocery store, which I walked to each night for dinner.

The deli at Albertsons made fresh sandwiches on demand, so that was my dinner each night. I had a long chat with one of the deli employees, Esther. Esther grew up on a Montana ranch and later moved to Nevada, where she lives with her husband most of the year. In the winter, the two head to Jackson to take advantage of the seasonal jobs.

Like most residents of Jackson, she loves the scenery. She did admit that she begins to tire of all the snow by the end of the season.

“It’s a constant here,” she explained.

I noted that people seemed to drive better in the snow here than back East, where one inch of snow brings out a primal fear that sends Mid-Atlantic residents fleeing to the grocery stores to buy milk, bread, and toilet paper.

“There can be 10 inches of snow in the forecast here in Jackson, and it won’t make people think twice about driving to a friend’s house party,” said Esther. 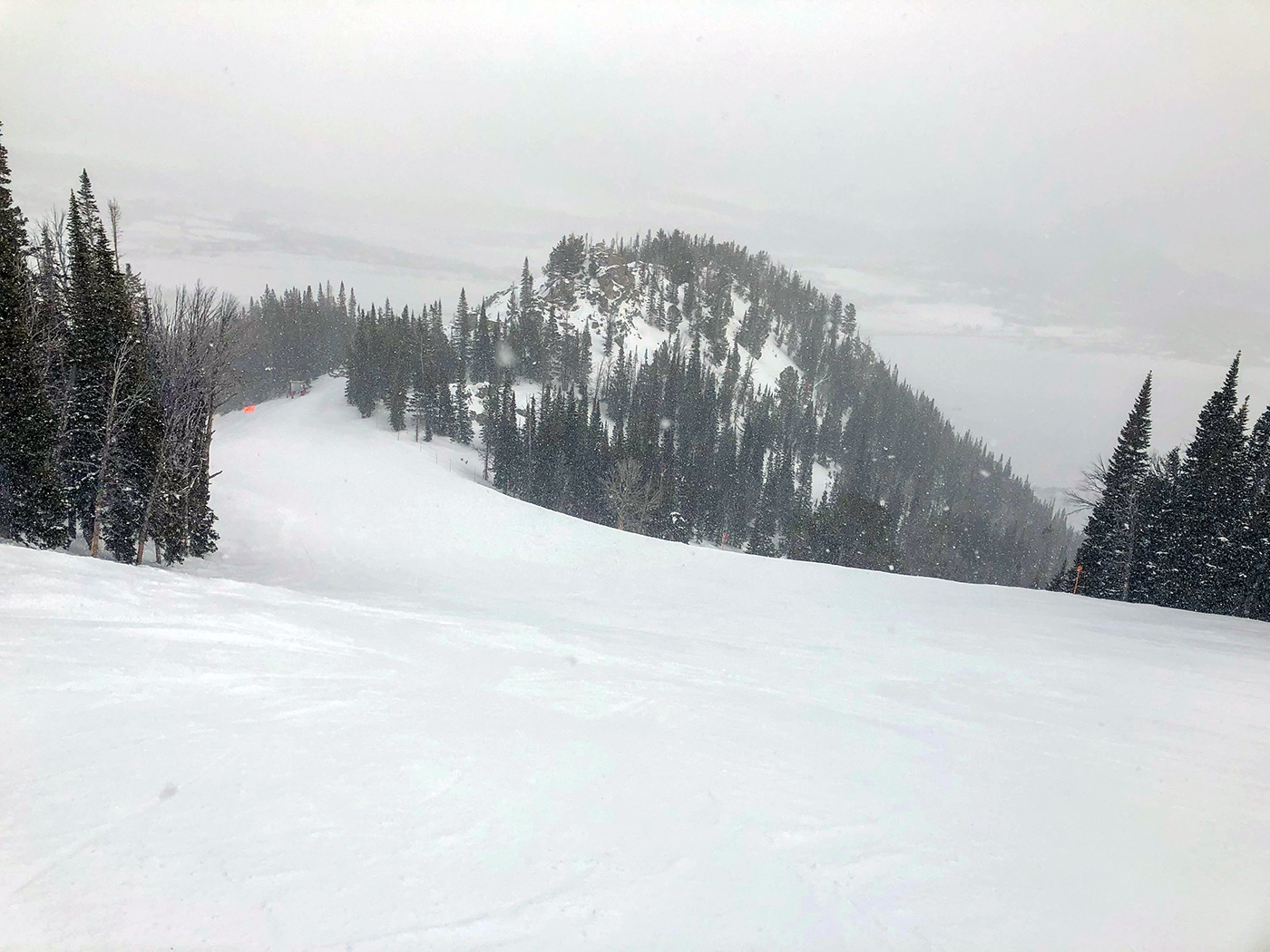 One potentially treacherous stretch of road in the winter is Teton Pass, which crosses northwest of Jackson into the neighboring state of Idaho. Teton Pass features a 10% grade in sections and crosses multiple avalanche slide areas. It’s not uncommon for the road to be closed mornings for avalanche control.

The town of Jackson is extremely expensive, as echoed by Esther and other residents I spoke with. As a consequence, many workers in Jackson, including school teachers, cannot afford to live in Jackson. They live over the border in Idaho where housing is cheaper, and have to make the sometimes-treacherous trip over Teton Pass 5, 6, or 7 days a week.

This has become a problem at many ski resorts in the west: nearby housing is in short supply and consequently is priced outside the reach of most employees.

While housing prices have climbed in Jackson over the years, there is one benefit for year-round residents: restaurants often offer discounted pricing and 2-for-1 offers during the “in between” seasons, when tourists aren’t flocking to the mountains in search of snow or in search of cool summer mountain air.

During the summer months, literally millions of visitors from around the world flock to Yellowstone National Park.

But while most roads into Yellowstone close in the winter, there are still thousands of hardy visitors who find a way into the park during the winter months to experience its geysers and scenery.

In between two days of skiing at Jackson Hole, I went on an adventure in Yellowstone, which I’ll describe in the next installment of Snow Trip 2018. 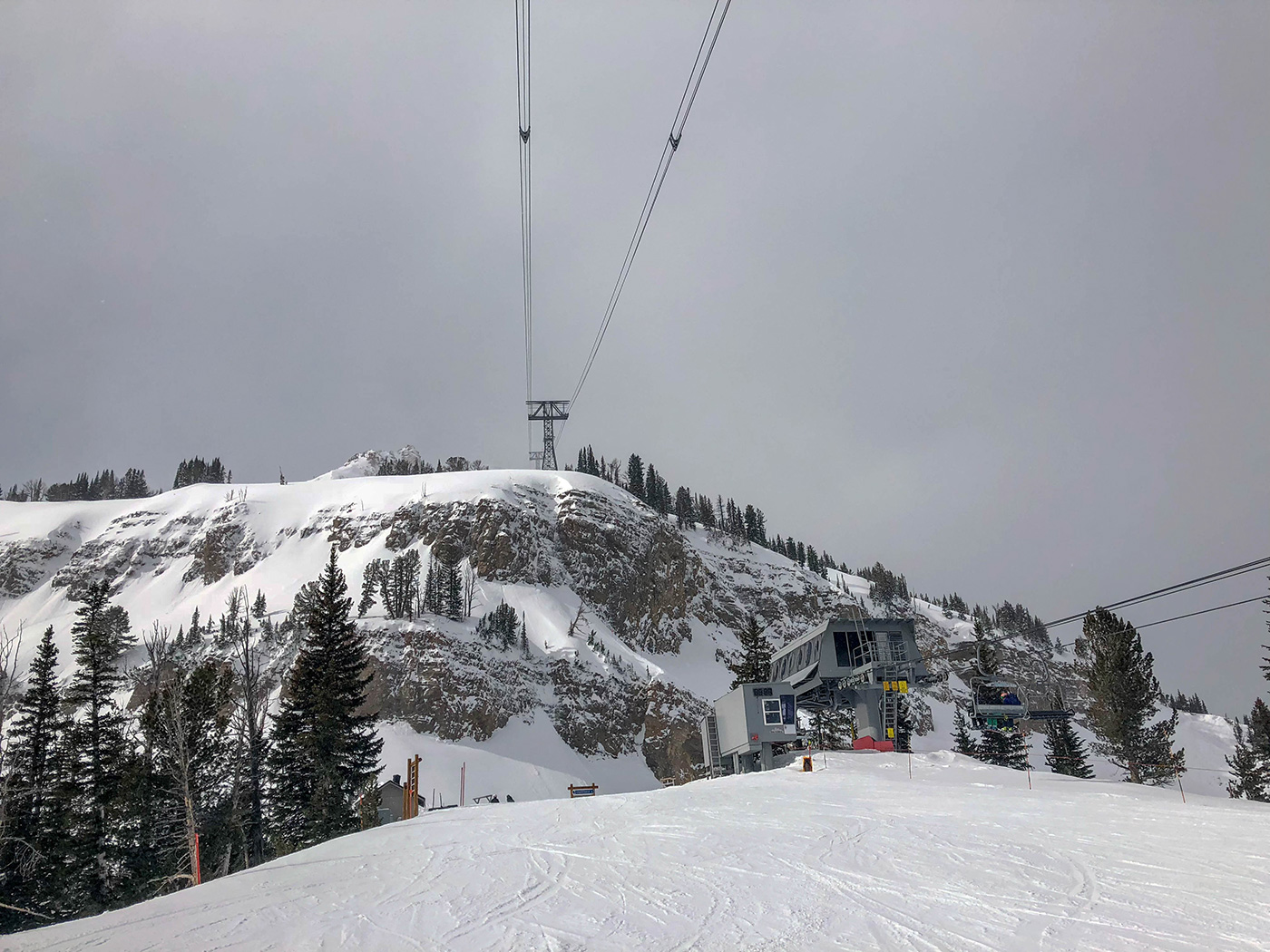 The tram keeps going up the mountain long after other lifts quit. There is no beginner or intermediate terrain off of the tram, but you can ride the tram back down if you feel in over your head. Photo by M. Scott Smith.

Perfect timing for this trip report. Thanks for the great info.  I'm leaving on Wednesday for Jackson Hole.  3 days of skiing and snowcoach tour into Yellowstone. 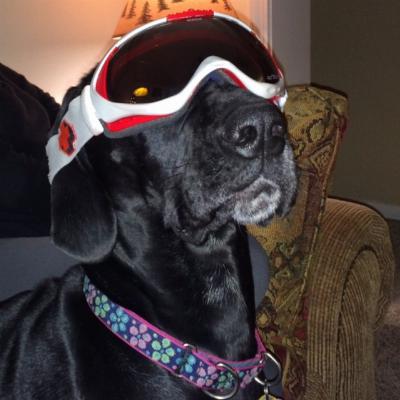 Nice report.  I just returned on the 17th.  You are correct about the expert terrain.  I'm very sore as I type.  We had 26 inches during our 5 days.  The day we left they recieved 10 inches then another 10 inches on Sunday.  They still did not have a lot of snow on the lower mountain and in the valley like they usually do..  It has been 10 years since I've been so it was a homecoming trip to me.  I love Jackson...no crowds good vibes great pow.