DCSki’s Editor is in the midst of a road trip through western states, in search of snow and adventure. After kicking off his trip in Las Vegas, he pointed his car north and found himself in the state of Idaho, where he checks in today. 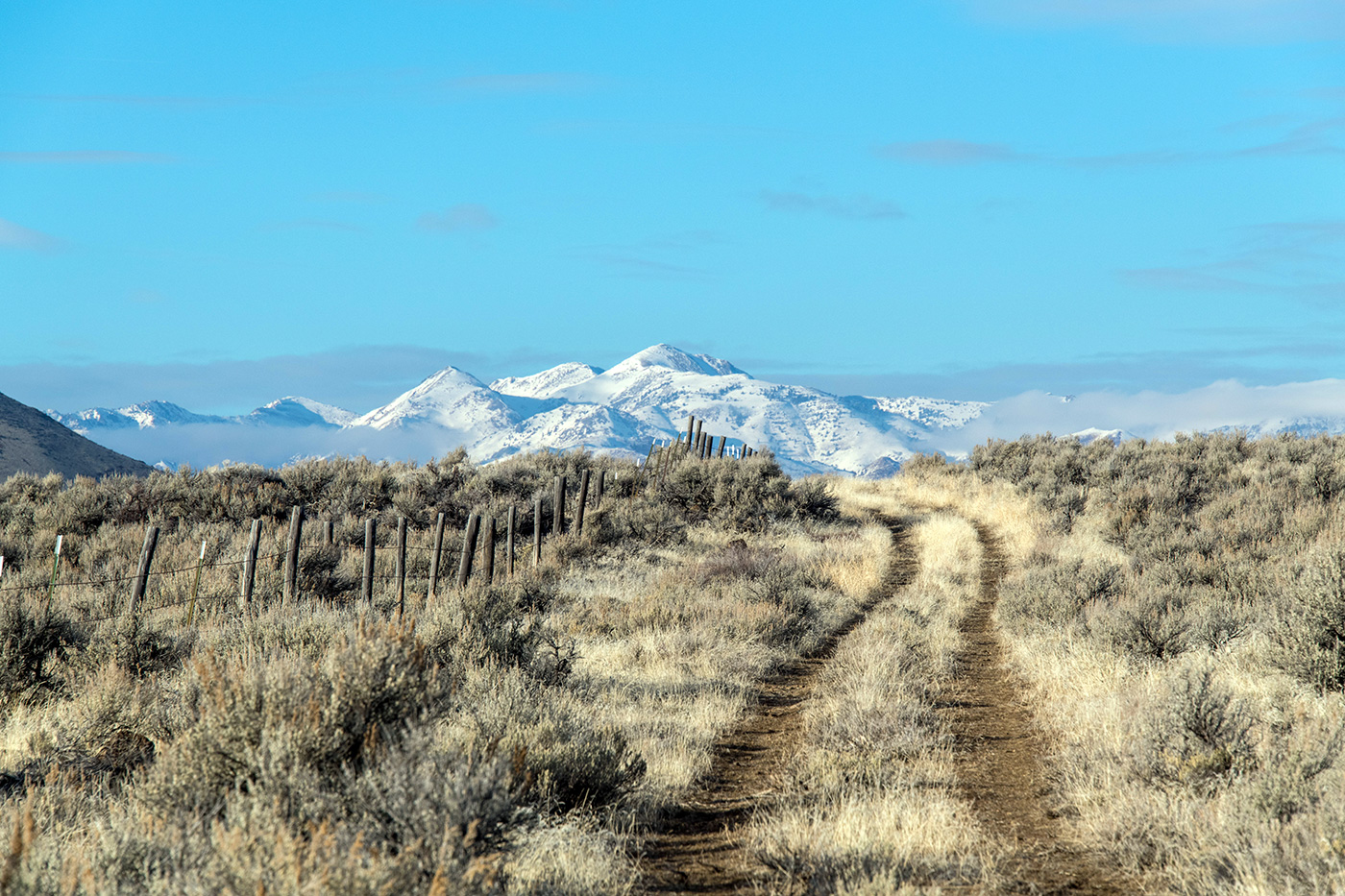 Idaho has some nice scenery. Photo by M. Scott Smith.

If I had to describe Idaho in one word, I would choose the word “nice.”

But what’s really nice about Idaho is the people. Every person I’ve run into in Idaho has been really nice. Genuinely, positively, nice.

This niceness was on display as soon as I arrived at Sun Valley Resort, the first major stop on my Snow Trip. Before I finished unloading the skis from my car in the outer reaches of a parking lot, a courtesy shuttle was right next to me waiting to whisk me to the base area.

Once at the base area, courtesy wagons are ready and waiting for you to pull as you haul your gear from the shuttle drop-off to the edge of the slopes. Employees dutifully returned the wagons back to their starting point each time a guest took advantage of this great idea. 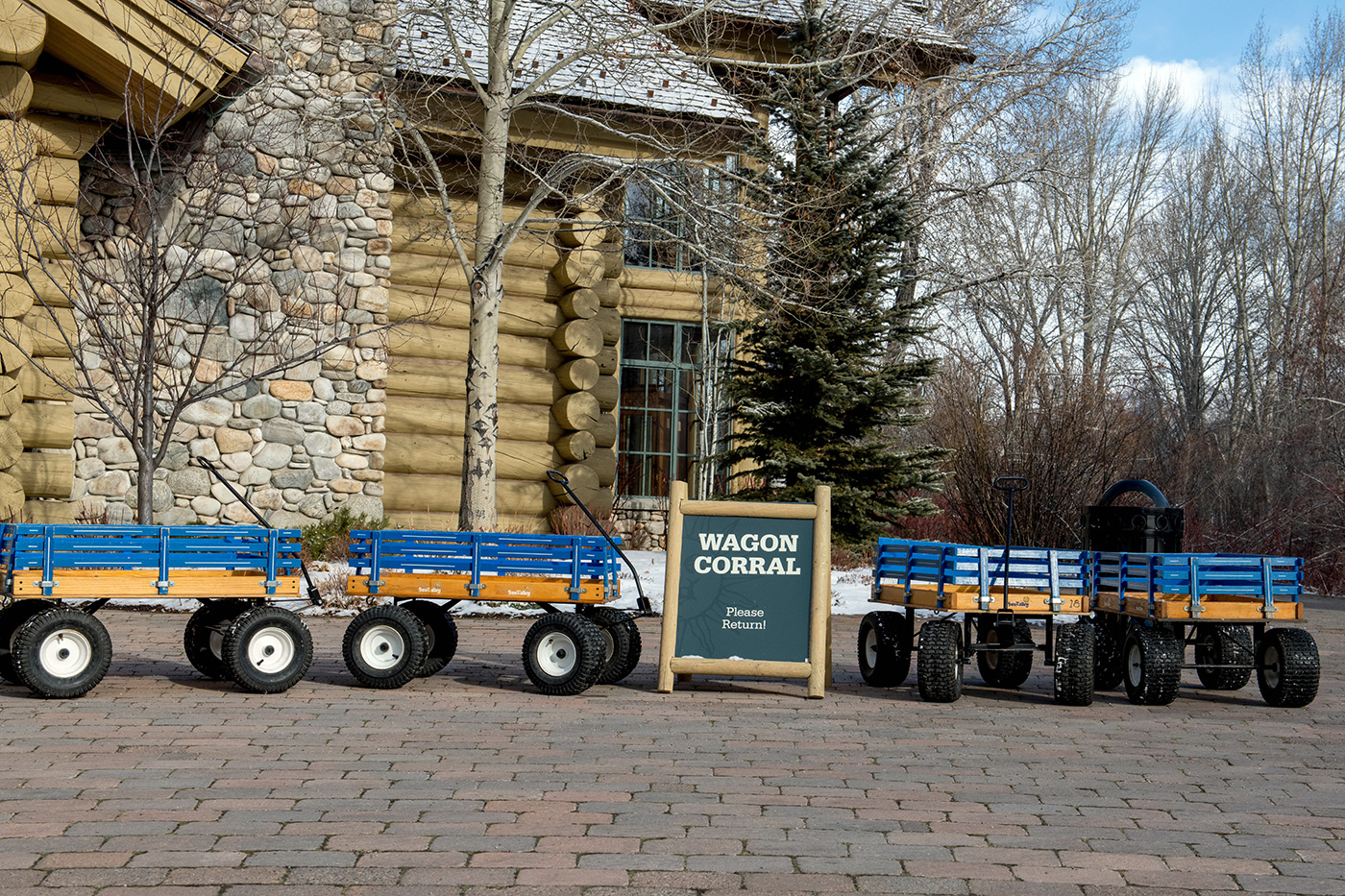 Sun Valley provides wagons as a courtesy to guests, making it much easier to haul gear from car to slopes. Photo by M. Scott Smith.

Inside the lodge, a cheerful lady at the ticket counter helped me activate my Mountain Collective pass for a two-day lift ticket. She enthusiastically told me about the 2 inches of snow that had fallen overnight. Every inch is welcome during this drought of a winter, which has doled out precious little natural snow to many western resorts. The fresh coating of snow seemed to put everyone in good spirits, from guests to employees.

So far, I haven’t talked about the mountain or the snow — I’ll get to that shortly. A lot of ski areas have mountains and snow. But not all areas have the caliber of employees and service I encountered at Sun Valley. This extended right to the end of the day, when the shuttle driver remembered exactly where I had parked without me saying anything. I’m not sure I would have remembered where my non-descript rental car was!

From visitors to employees, everyone in Ketchum — the hometown of Sun Valley Resort — seemed happy and, well, nice.

“This is a very laid back town,” explained Erika, a “snow ranger” with the National Forest Service who has lived in town for the past 8 years. Sun Valley operates on National Forest land courtesy of a special use permit, and up to 2.75% of the gross lift ticket and ski school receipts are returned to the U.S. Treasury or the Bureau of Land Management, helping to fund local recreation programs. Rangers from the Forest Service provide free “ski with a ranger” sessions on Tuesdays and Thursdays, where they explain the history and ecology of the area.

Erika told me that Sun Valley is a favorite place for celebrities and business leaders to hang out, from Tom Hanks to Mark Zuckerberg to Warren Buffet to Arnold Schwarzenegger, who owns a house in town.

They enjoy it here because “everyone leaves them alone,” she said. At Sun Valley, it’s not unusual to ride a chairlift with a famous person and not realize it. 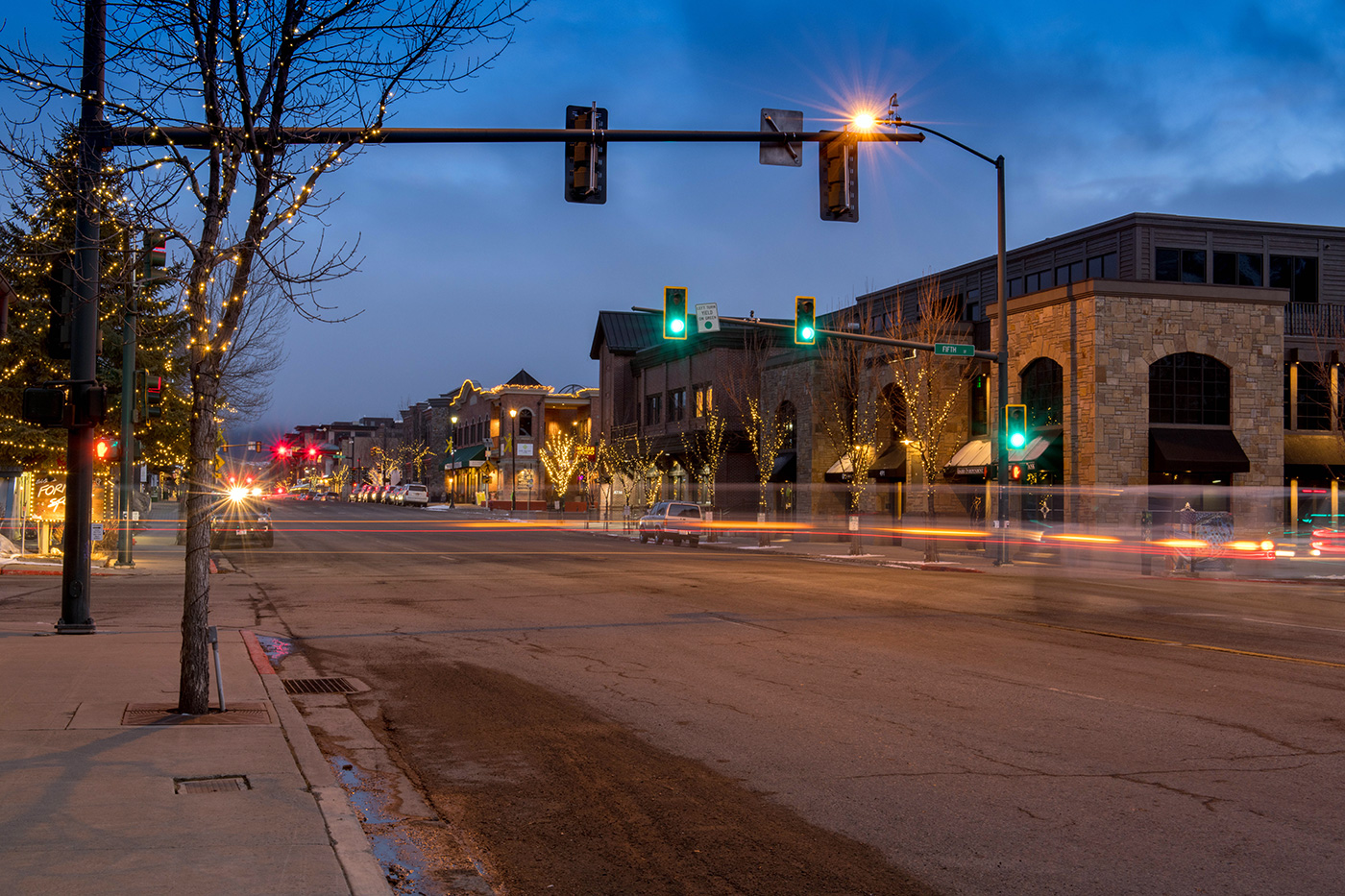 The town of Ketchum at night. Photo by M. Scott Smith.

There is a calming presence to the impressive mountains surrounding the town.

What draws people to the town during the winter is that there are ski slopes carved into one of those mountains. The slopes on Bald Mountain are not for beginners; there are some greens that rival black diamonds at Mid-Atlantic ski areas such as Whitetail Resort. (Just across town, some limited beginner terrain is available on a separate mini-mountain.) The blues carry quite a pitch and don’t let go of it for the entire trip down the mountain, leaving good memories and sore thighs.

So, what about those snow conditions? 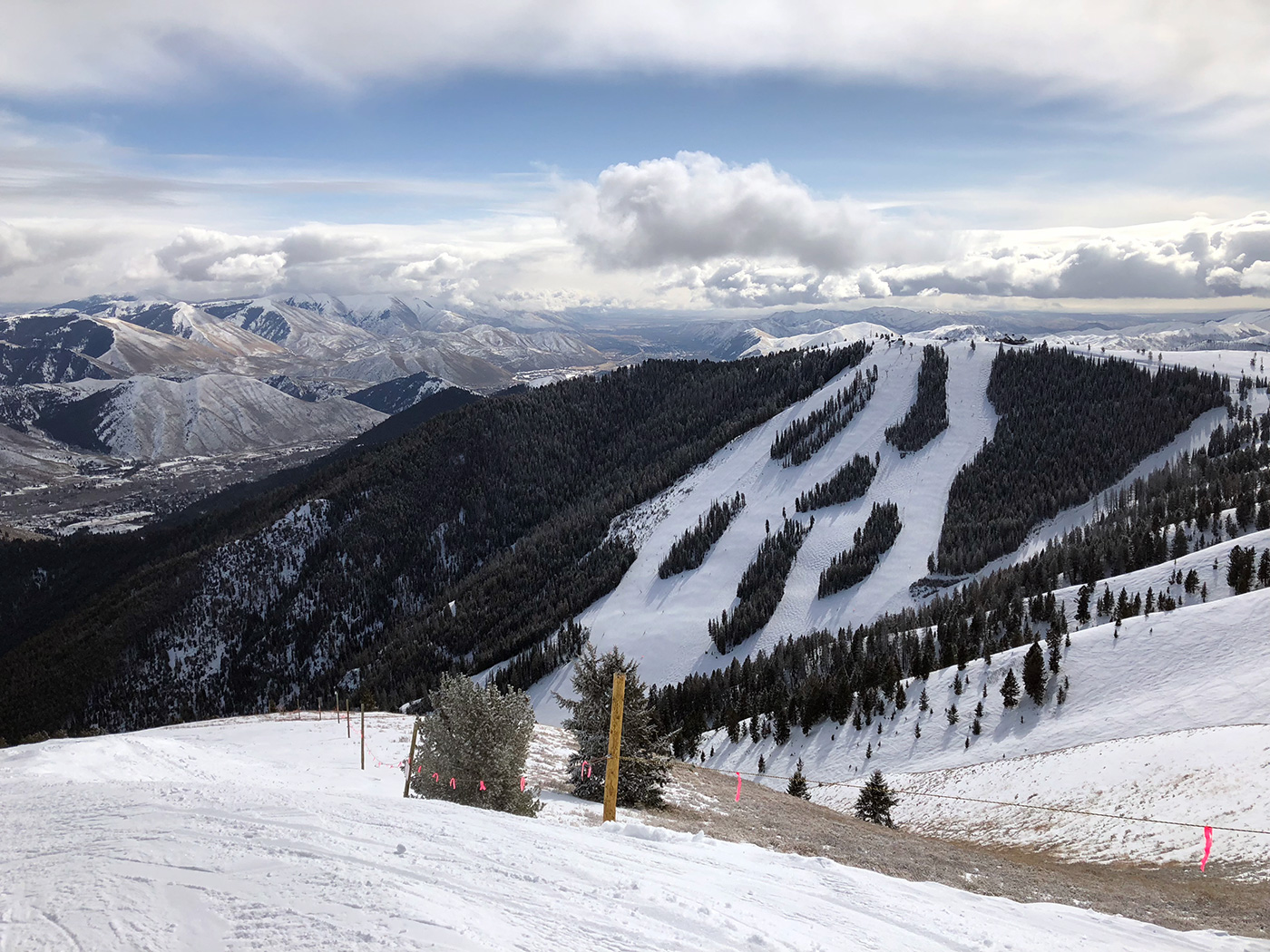 Mother Nature has been stingy with snow this season. Last year was a banner year for Sun Valley: over 300 inches of snow fell from the sky. (Hearing locals reminisce about last season became a common theme as I shared lift rides.) This year, it’s been a different story — only 72 inches of snow have fallen so far. Parts of the mountain had no snow cover at all during my visit February 12-13, 2018, and a lot of advanced terrain was unskiable, at least if you value the bases on your skis.

But that left plenty of acres of trails that were covered in snow — thanks to Sun Valley’s meticulous grooming, as well as snowmaking, which covers 545 acres when Mother Nature is too distracted to do it herself. Miles of groomers were ready and waiting, providing great packed powder conditions and stunning views. There may have been reminiscing about bountiful snow in past seasons, but I didn’t hear anyone complaining about this season. Instead, everyone at Sun Valley was skiing with big smiles on their faces, soaking in the sun from a cloudless sky. Sun Valley is appropriately named: the sun seems to shine brighter here, and it shines many days out of the year. (It shined so much that my face sunburned a little, even after putting on suntan lotion.) 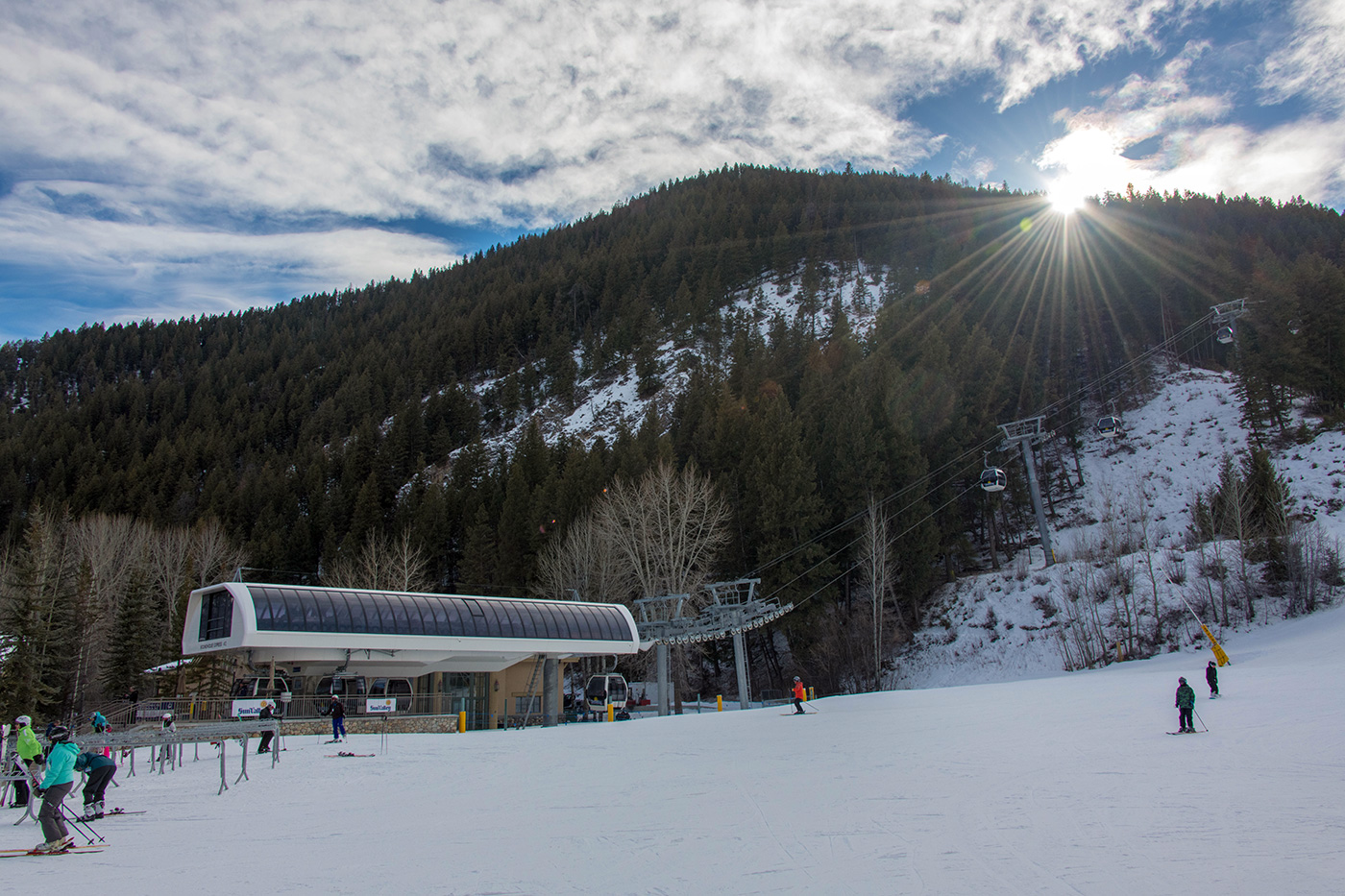 On average, there are over 200 days of sunshine each year at Sun Valley. Photo by M. Scott Smith.

Erika pointed out that “you don’t end up at Sun Valley. You have to want to get here.”

Indeed, Sun Valley is off the beaten path. Whereas a trip along I-70 in Colorado allows you to taste test numerous ski resorts, you have to go a bit out of your way to reach Sun Valley.

One of the rewards of its isolation? A complete lack of lift lines. Rarely did I see other people in line for the lift — in fact, often, I had a ski slope all to myself.

The most crowded day at Sun Valley was on December 28, 2016, when 9,000 skiers and boarders showed up. On average, Sun Valley welcomes 2,700 guests to its 78 trails. With 2,054 skiable acres (spread across a 3,400-foot vertical drop — and serviced by 10 mostly-high-speed chairlifts including a gondola), that’s a pretty good guest-to-acre ratio. 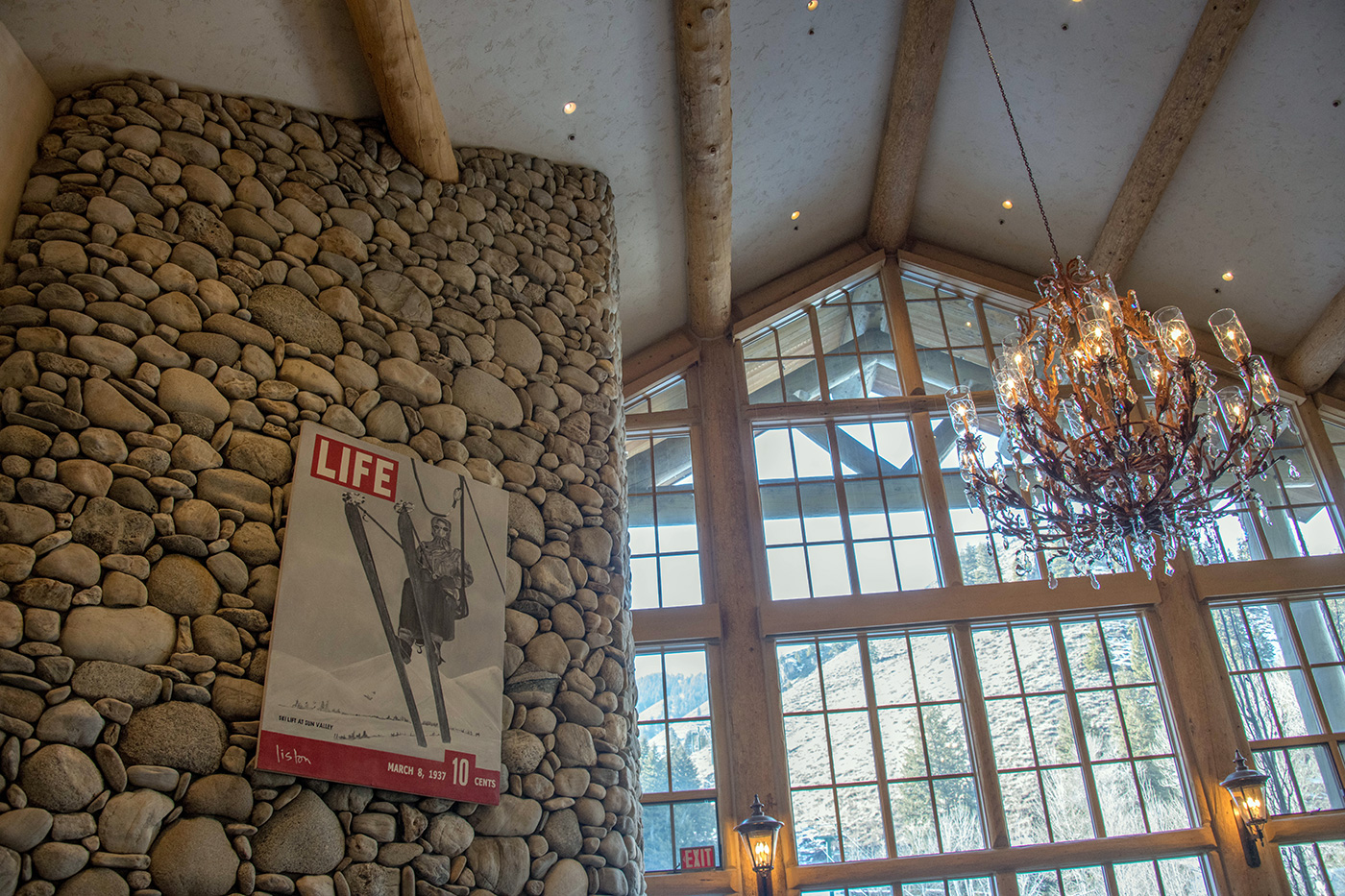 There is a lot of history at Sun Valley Resort. Photo by M. Scott Smith.

I couldn’t help but feel a sense of history as I skied at Sun Valley. The resort has tallied a lot of “firsts” over the years. To start with, it was the first destination ski resort in the United States.

In 1935, Averell Harriman decided he wanted to open a ski resort, and he began looking for locations. Harriman had already made a name for himself: he had served as Ambassador to the United Nations, Ambassador to Britain, Governor of New York, and Undersecretary of State. Born into a wealthy family, he was a Wall Street magnate and served as Chairman of the Board of Union Pacific Railroad.

Harriman partnered with Felix Scaffgotsch — an Austrian count and experienced skier — to scout out locations for a resort. They wanted the resort to be in a remote location, to have deep, dry powder, and to be served by the Union Pacific Railroad.

Locations in Colorado were deemed “too cold and windy”, and places likes California and Washington were considered “too crowded.” Ultimately they settled on the current location of Sun Valley.

Sun Valley was the first resort to have chairlifts, and was home to the first mountain restaurant in the United States. It had the first destination ski lodge in the States, and was the first ski area to receive a special use permit from the Forest Service. Its slopes have been the stomping grounds for Olympic skiers like gold medalist Picabo Street, who first learned how to ski at Sun Valley.

As I skied Sun Valley, I noticed that a lot of guests were older and seemed to know each other — perhaps wealthy retirees who spent part or all of their year in Ketchum. People almost twice my age were easily skiing twice as well as me; it was humbling. There was a certain camaraderie among guests and employees throughout the resort, like the town was one big family.

As you may know from past stories, I’m always in search of good resort food, and more often than not my searches have come up empty. I’m happy to report that Sun Valley is an exception.

I stopped at one of the mountaintop lodges for a late lunch. The lodge had a roaring and crackling wood fire, and offered counter service. I tentatively walked towards a station and began eyeing the menu. The chef motioned me over and enthusiastically began filling small cups with samples of food — a beef brisket that had been aged 18 hours, and some corned beef. Both were delicious. But I opted for a fancy turkey sandwich. Served on pita bread and accompanied by fancy chips, the sandwich included butternut squash, bacon, a cranberry jam, gouda cheese, and other things I’m forgetting. It was tasty and the generous portion was really too much to eat. With a bottle of Sprite, it came to just over $20. The next day, I had a tasty French Dip sandwich at the base lodge. The quality of both these meals was a few thousand feet above typical ski resort fare; unlike the food at many ski areas, I didn’t feel ripped off. 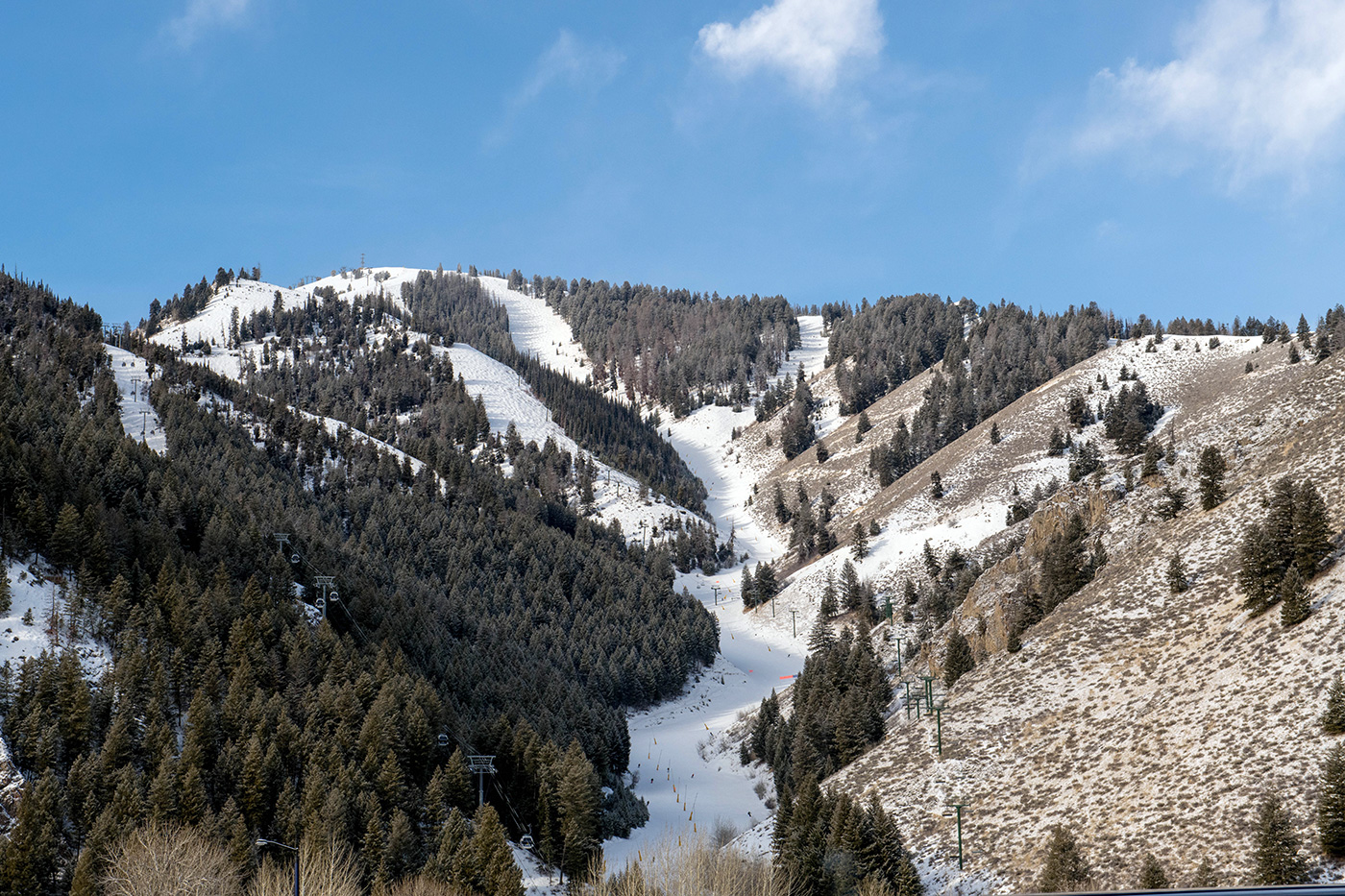 Erika the snow ranger told me that Sun Valley is looking to attract more folks to its resort, and one way it will do that is by expanding skiing into the Cold Springs area, opening up many more acres of skiing and replacing the Cold Springs chairlift — a double that is currently the oldest lift at the resort. Sun Valley may begin construction as early as the summer of 2018, once a few remaining regulatory and environmental hurdles are cleared.

Despite being an upscale resort, I had no trouble finding affordable lodging in Ketchum. I stayed at the Best Western Tyrolean Lodge, which was right near the base area and a short walk to downtown Ketchum. It ran about $160 a night inclusive of taxes, and included breakfast. And, not surprisingly, the lady manning the front desk was — you guessed it, nice.

After two days of skiing in Sun Valley, it was time to continue my search for more snow. That search saw me heading east over a high, snowy mountain known as Teton Pass. Next up: skiing the steeps at Jackson Hole.