kwillg6
March 26, 2007
Member since 01/18/2005 🔗
2,060 posts
Was at t-line this past weekend. It was amazing. Just six days earlier the entire mountain was skiable. Yesterday, temps were in the 70's and run to run, you could watch the snow melt. If these temps persist for the remainder of the week, they will lose access to quite a few trails which still have plenty of snow on them. They may lose sally, and access to dew drop and twister. Maybe it's that MM GW thing. I don't know.

Skied most of the day yesterday with Jimmy and some locals/regulars on the drop. Those whales had turned from sharks to goldfish by the afternoon. All soft, with super lines down the middle of them. Ya right Jimmy, Ya don't smile like that when ya play golf!

Or maybe it's the end of March

. The sound of running water was all over wasn't it? When we got to T-Line Friday night and got out of the truck, my 16 year old commented, "There is a disturbing lack of white here. It's depressing"

You know it's spring when you see this: 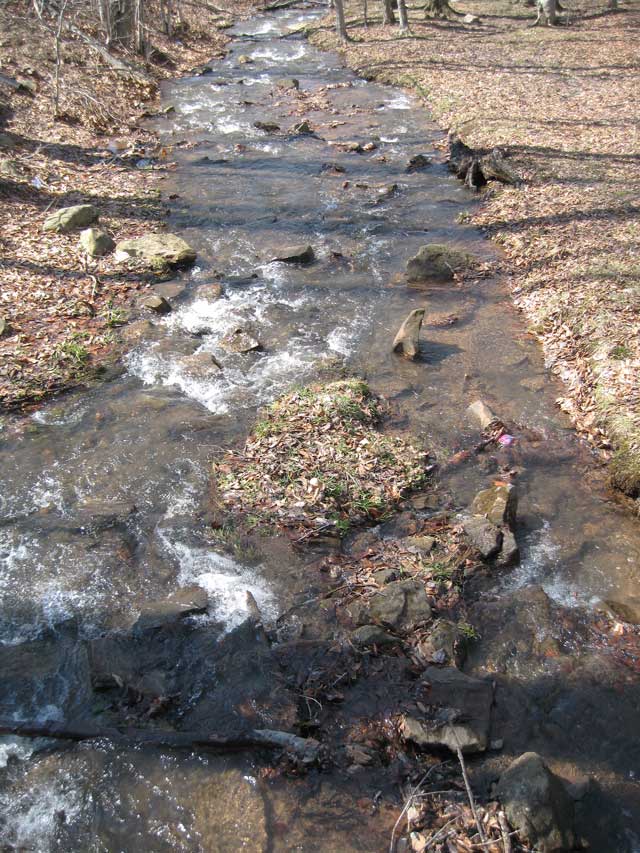 Sorry I didn't catch up with you guys this weekend.

kwillg6
March 26, 2007
Member since 01/18/2005 🔗
2,060 posts
We were definetly not in the trees unless we were hiking. Saw your truck, but no signs of life... It was wet Saturday, so I ended up watching some b-ball and killing a few cold ones with Jimmy in the pub in the late pm. What a blue-bird day Sunday! This weekend will be the final hurrah, so maybe we can do a cookout in the horseshoe @ NW this saturday.

Let's watch the weather and see if we can pull it off!

I was out for a bit on Saturday and got drenched. Sunday was beautiful and I was playing on Dew Drop and Upper Thunderstruck, but my poor out of shape legs start to scream after a while in the slush

Let's do the cookout if we can!

Redman
March 26, 2007
Member since 03/15/2004 🔗
106 posts
Couldn't get enough Drop action yesterday and rode home with a major sh$t eaten' grin all the way back to the flatlands!!! Hopefully there will be something left for Locals Cup to keep our minds right for the next 8 months. Got a good racoon face too...forgot the SPF 30 (:^O)>>>

jimmy
March 26, 2007
Member since 03/5/2004 🔗
2,650 posts
Sunday the Drop was like the CV Who's Who, i felt very much the gaper following all the real "Big Boys/Girls" down. What a great day to be alive, big smiles, cool lines, how about that eagle we saw? Sunday made me forget all about Saturday, spent that day in a clinic, rained ALL DAY, almost. But then there was Thursday & Friday, snow corned up nicely, got my last turns for the season on Thunderdraft. Unseason almost here but not yet

March 26, 2007
Member since 07/12/2004 🔗
2,298 posts
I was there on Sun. Arrived late actually. In the early AM I went to Canaan for a single ride and a look at the National Nordic Reserve. Mistake. It was frozen overnight crusted and punchy, with just a little soft snow. Skied it anyway, I didn't care. Had so much fun there this year I did it for old time's sake. Skied down, said hello to another Whitegrasser, then went to WG. Nobody home, not a single car in the parking lot; a note tacked to the door - gone skiing. The lower open slope had a narrow strip of old snow beside the snow fence. Just what I wanted, a chance to test the climbing ability of klister. If you don't know what that is, you probably don't need to know but it can be googled. It worked, the klistered skis could climb and I made what were possibly the last 5 turns at Whitegrass for the 06-07 season. Once again it was a tribute to all the fun had there this year.

Then at 1 PM I went to Timberline, ate lunch and met up with Gary and Rick, rode the whales, dropped off the wall, and jumped from one snow patch to another on Thunderdraft. It was a blast. The only thing wrong with spring skiing on a 70 deg. day is that it signals the end.

Next weekend VT with daughter, son-in-law and grandsons. Next month the annual backcountry hut trip to Mt. Hood. Life is good.

Are they still grooming? Any bumps on OTW?

March 27, 2007
Member since 07/12/2004 🔗
2,298 posts
They can't groom when it's this warm. It would mix the mud with the snow. You just watch it melt and hope it goes below freezing at night, usually just before dawn when the groomers have gone home. Typically it's very firm in the AM and you just wait until the sun gets to it, often at noon or later. I heard a guy loudly complaining at CV on Sun. morning, nothing was groomed and it was icy all over the mountain. He did not understand the above.

With this week's forecasted warm temps. chances are not good of making it until next weekend. The whales will be there for a long time but access to the top and especially return from the bottom to the lift will be a problem.

kwillg6
March 27, 2007
Member since 01/18/2005 🔗
2,060 posts
I dunno, Denis. T-line does a good job of moving what snow they have and with the final weekend upon us, I imagine that come Friday night, Amos will have created access to everything he possibly can. Don't expect any grooming during the week though.

The weather looks really good for Saturday. Me thinks more and more that a gathering of friends and neighbors for a cookout could be a reality. Hope those drop whales are ready to be fished!!!

, ice skiing at it's finest.

skier219
March 27, 2007
Member since 01/8/2005 🔗
1,318 posts
I am trying to figure if I can squeeze one more ski day in this week; right now Friday is looking like a decent day at either TL or Snowshoe, provided there is snow left on enough trails! Planning really gets dicey this late in the season. Maybe I ought to just pack my car and be ready to go...