Tanglwood was a small ski area in the Poconos, catering mostly to families. Tanglwood was an â€œinvertedâ€ resort, with the lodge located at the top of the mountain. Two double lifts and one beginner tow serviced skiers and snowboarders, while another tow lift serviced Tanglwoodâ€™s snow tubing area. Tanglwood offered night skiing on certain nights of the week. Tanglwood had been in operation for more than forty years, but went through some rough patches in the late 2000s. The ski area was closed for the 2007-2008 winter season, but obtained new owners in 2008. However, the ski area was closed once again for the 2010-2011 winter season. DCSki moved Tanglwood to the “Lost Ski Areas” section in early 2014, as it does not appear likely Tanglwood will re-open in the near future. Beginning in 2012, the owners of Tanglwood began to liquidate ski area assets such as chairlifts and groomers.

You may view an archive of DCSki’s previous Resort Profile for Tanglwood here.

Tanglwood had a vertical drop of 415 feet and 35 skiable acres. 9 trails were available, with the longest clocking in at 0.75 miles. Tanglwood had four lifts (including two doubles), and a lift capacity of 3,160 skiers per hour. A terrain park and tubing park was offered, the latter services by two rope tows. 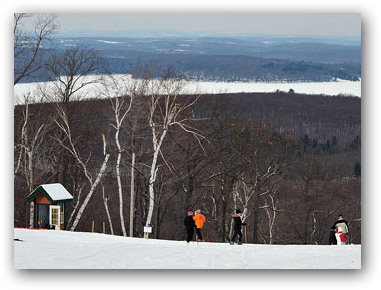 I grew up skiing at Tanglwood- it was a great place to learn to ski, and very family oriented.  It was defintelty small, but I was still sad to see it had been closed up.  The trail map shown was the final one.  If you look at the satellite images, you can ski another trail that was cut to the right of Weasel called Panther.  It was a black that was made specifically so the developer could sell "slope side" housing.  It had its own t-bar to service it since it wasnt connected to any other run.  It also didnt have any snow making on it, so it was only open two or three times when there was enough snow.  The tubing run used to be part of Big Bear, which was the longest trail there and ran from the tubing area all the way to the bottom of the mountain.  There was a T-bar on the upper part of Deer Run that they used for ski lessons.  I also remember Sly Fox being one of the more dangerous runs- it had a very sharp switchback on it and new skiers who didnt know how to turn sharply would end up in a tree.

I skied "Paper Birch" as a young teen with my older brothers in the late 60's befor it was renamed Tanglewood.  Looks like the main road to the lodge is still named "Paper Birch".

I never got to Paper Birch growing up but did ski and work at Tanglewood while in college.  It was a nice little place and is too bad it did not survive.

When did the name change from paper birch to tanglewood?