fishnski
August 20, 2009
Member since 03/27/2005 🔗
3,530 posts
Thanks to Bill Surfers down here will find their thrill!...Was at Wrightsville Bch,NC this morn & saw the 1st of those nice long rollers coming in at a steady pace.Supposed to be 10 to 15 footers by this weekend which will put my rearend on the beach just watching the younguns....I rode my last 12 footer a few years back & said I didn't need that kind of thrill anymore! (49 years old)...Remember that if you were facing the waves a 15 footer would look like a 30 foot monster...Thats a whole lot of power coming for ya!

Will big wave bring more crabs into your neighbor's pots? If there is a chance I would skip the beach and hit those bad boys up while he is out watching the surfers.

"I'M TALKING TO YOU NOAH!
Thats not NOAA, but NOAH, my buddies son who is a surfer.
You and every surfer from Hatteras north, stay the heck out of the water Saturday. This hurricane is like no other that that has been north of 35 north since the 50s. I mean that. A 130-140 mph storm at 37.5 and 70.0 west, with hurricane force winds extending out 100-150 northwest and 250 east is not going to give you nice clean sets. Monster waves... tasty ones as surfers like to say... with multiple breaks well out in ocean and then varying rates of speed causing some cross confusion of power mounds of water is what is coming. Basically its going to be one heck of show on the mid atlantic coast.. but a show best seen from the shore line.
You will get your chance to surf a hurricane again this year, a 100 mph storm that is 2 days away. but this is a beast not seen in years. I would say at the latitude of the mid atlantic states, the only thing we have seen like this 1938 or 1944. Mercifully the hit on the US coast is not a sure thing. What is a sure thing is a beast creating the kind of waves that would cause great harm to life forms that relying on breathing if they are caught in it.
I do want to point out that south of 35 north, TPC is now very close to the track I have had, which is on top of 70 west..They are now down to 60 miles east of me, at 69 Sat morning. Where we are in a bigger tiff is the intensity. I believe this will be at its strongest point Saturday, and this will try to get to 930 mb or lower, with winds 120kts or higher. then. But again, I certainly see the merit of the TPC ideas and the argument is simply me weighing things differently
In the meantime.. NOAH, discretion is the better part of valor.
I'll tell you what Noah, heres my deal.. surfing a couple of noreasters with snow flying around.... Get your wet suit ready. Dont drive your parents nuts, okay."

Fish - What are they saying about the tides this weekend? Is Bill gonna push a bunch of water up on the island?


We are on Summer break!...Been Doing Bike stuff..Time to get Wet!

I Guess most of you all that head to the beach go to the Outer Banks For good Surf...Should be the Same up there SCWVA as down here at the Southern Banks...We will be having a strong Tidal Pull & Push due to the New Moon. Worried about Beach erosion & Killer Rip currents with a capital K!...

Remember to tell everyone you know that ventures into the Ocean regardless of whether there is a hurricane out there or not that rip currents occur all year...To Not Panic & try to fight your way back to the beach...just swim parallel to the beach ..Rip currents are very narrow & you will swim out of the wash in no time...Many Tragedies would be averted if everyone had this drilled into them. You can spot them & swim away from them...Stay Safe!!...Don't get caught in a ...RIP..

fishnski
August 22, 2009
Member since 03/27/2005 🔗
3,530 posts
The Storm had lost some punch lately so I really don't feel that conditions were epic today allthough Very Good. We had 5 to 8 foot waves with maybe the occasional Rogue 9 footer here at Wrightsville/Carolina/Kure beach...Further up from my Camp up in the Hatteras area I'm sure the waves were a little larger....Closer to the storm for one thing. My "Mature" Butt opted for Yard chores & a shopping spree at Sams club...Be out tomorrow....

This is what we had all day with the occasional sets a couple of feet higher...Our water is clearer down here

camp
August 31, 2009
Member since 01/30/2005 🔗
630 posts
Originally Posted By: Redman
Come on fishnski...even Eddie's mom would go!!! I'm heading down first thing tomorrow morning ...
Hey Redman,
I was down at Frisco all of last week, and made it up to S-Turns and the lighthouse a few times. S-Turns was a bit much for me and my longboard shape. Had a few good rides at the light between Bill and Danny.

Here's Danny at S-turns on our way off the island Saturday. 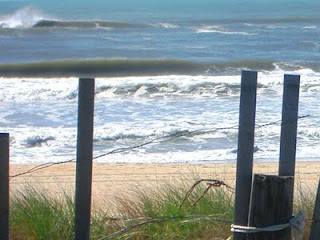 Redman
September 2, 2009
Member since 03/15/2004 🔗
106 posts
Camps,
Got good glassy overhead slopey sets from Bill on Friday afternoon just north of Oregon Inlet. Water was a little chilly but very long rides. From base camp in Kill Devil Hills, checked Avalon Pier first thing Sunday morning and sets were breaking out past the end and rocking the pier. Strong current going north but there was a window to get out at the pier and begin the long drift and the chance to snag the way outside set waves. Decided to check out another deep water spot further north. The cameras were out as were the joe pros...way outside and double overhead. Intermittant marine layer made spectating difficult. Riders had to walk south 400 yards to paddleout spot, duck dive it through 3 lines of 4-5 foot foamballs, and then hopefully catch a set wave before riding the current quickly to the north. If you didn't catch one in front of the cameras, then you better catch one soon before you saw the pink house. After that, you were on your way to Va beach!!! BTW, the pink house was about 400 yards north of where you came on the beach. After hours of watching, we went back to the house to wait for Sunday. After sitting on the couch for about a half hour I said, "f'it, I've got to try!" Returned to said spot and gave it a go out. Made it to the outside line of foamballs and took half a dozen on the head. The pink house was coming up quickly so I turned and proned in for a 150 yard ride to the sand. Got out of the water just in time to miss a massive thunderstorm that rolled through town. Tomorrow is another day. Dawn patrol Sunday morning put us back at the spot north of the Inlet. The boots on the sand had already given the cell call stating Trestles-like overhead glassy peaks up and down the beach. Sure enough, crested the dune and out in the lineup for 2 hours. Scored again. Back to base camp for lunch and then back for another 2 hour afternoon session. My arms are noodles but by stoke had been satiated. Packed up the Tacoma and was back in Burke by 8:00. Wanted to return for Danny in Ocean City but bailed for the one and done and instead rode up the Wakefield Good and Plenty 20 from the house Saturday and Sunday. Hope to get a couple more trips before the hills come alive which appears to be coming early this year. peace (:^O)>>>

Glad to hear of your score,
any photos?

Redman
September 2, 2009
Member since 03/15/2004 🔗
106 posts
No pix...and I even brought the video cam with a fresh tape. Never been one to document the moment unless I have someone along who is willing to sit on the beach and film. Definitely the next time down I'll get some footage. Saturday was a tough day to shoot forsure due to the maritime layer. Good luck on the upcoming marathon trek, you guys are animals!!!
DCSki Sponsor: Canaan Valley Resort