bawalker
May 2, 2007
Member since 12/1/2003 🔗
1,547 posts
I believe it was this past Saturday that the first wreck happened for the new portion of Corridor H from Wardensville to Baker. Technically the wreck wasn't ON corridor H, rather it was at the bottom of the "S" turns that connect it to old Rt 55.

For those of you who have driven it, you know as you are leaving Wardensville, the road makes a sharp left hand turn and then turns right again for the incline up the hill before the road becomes 4 lanes. Those "S" turns at the bottom are pretty sharp with no banking and means you have to slow down tremendously. However an 18 wheeler tipped over on it's side tearing out the guardrail after appearantly carrying too much speed into the first S turn.

My advice... if you see an 18 wheeler coming down off of CH onto those turns, slow down so he gets around them before you, or speed up to get around them before the truck does. I've seen way too many carry speed and act like they are going to tip over. Last thing I need is to be UNDER it when it does.

May 2, 2007
Member since 03/5/2004 🔗
3,107 posts
Thanks Brad. The times I drove the ramp during this past winter I wondered why they made it so dangerous. I know it is a temp major ramp...if they ever complete the road around Wardensville, but since this is not going to happen any time soon, WHY not build the first ramp to CH more safe.
The Colonel?
By the way, how is your fight with the county folks over the Lost River dam coming?

May 2, 2007
Member since 07/12/2004 🔗
2,281 posts
The whole stretch between Wardensville and Moorefield scares me. It is high and wind exposed in many places. It has many downhill curves where people carry a lot of speed and the guard rails are low or non existent. It wouldn't take much to go off the edge and that would be certain death in many places. I drove it in snow and poor visibility half a dozen times this year. It is not as scary as 93 in a white out, but it is (to me) a lot scarier than old 55. Is old 55 still intact? Maybe that's what I should take if the weather is dicey.

bawalker
May 3, 2007
Member since 12/1/2003 🔗
1,547 posts
Denis, you are absolutely right that parts of the highway are extremely vulnerable to high cross winds. The worst parts for that are the Pine Ridge area which has the west to east winds while that part of the highway is going in a SW/NE direction. Worst of all there are no immediate trees or other surrounding hills to deflect any of that wind. I drove it alot in my Subaru this winter and while there were no drifts there, I had to slow down quite a bit. The other portion I don't like is the McCauley bridges which have some really bad cross winds as well.

The worst experience I had this winter was the ice/snow storm in Feb. I was in Moorefield until 7pm working for a client when I realized "Oh crap that glistening isn't rain, it's ice!!" So I get in the suby, drive through Moorefield at like 2mph and at this point the town is dead. Every restraunt and store is closed. There is maybe 2-3" of snow with a nasty ice crust on top and even CH hasn't been plowed yet. I gear it down into 2-3rd gears and it takes me close to an hour and half to get home. Even when I drove on the new McCauley bridges that were unplowed in 3rd gear at 20mph... the banking of the bridges caused my car to start to slide sideways to the inside of the bridge a little bit. Talk about scary!!

Old Rt 55 is very much in tact and has not been touched, closed, or anything. You can still drive it from Wardensville to Baker as you always have.

bawalker
May 3, 2007
Member since 12/1/2003 🔗
1,547 posts
I wondered why it was made so dangerous too. In fact where the entrance to the ramp begins is about 50' beyond the old Trout Run Cutoff entrance. If they used that they could have easily straightened that out and made it more of a straight line with a small banked curve in it. Unless they were trying to avoid that for trucks carrying too much speed and loosing control and doing a straight shot into the houses that sit opposite of CH...?

Either way I get the feeling that this isn't the last wreck by an 18 wheeler we'll see at that ramp. I expect more turning over on their sides all over that ramp intersection.

To answer your question about the Lost River dam... well the Environmental Impact Statement (EIS) was released two weeks ago and the Potomac Valley Soil Conservation Service voted 7-1 to approve it. However the EIS still has not addressed the concerns and still contains very faulty information that was never studied. It was just a going through the motions. This summer is going to be another nightmarish summer dealing with those absolutely no brained politicians who want this at *ALL* costs. We are revving up to make their lives a public living nightmare.

Originally Posted By: The Colonel
Thanks Brad. The times I drove the ramp during this past winter I wondered why they made it so dangerous. I know it is a temp major ramp...if they ever complete the road around Wardensville, but since this is not going to happen any time soon, WHY not build the first ramp to CH more safe.
The Colonel?
By the way, how is your fight with the county folks over the Lost River dam coming?

Clay
May 6, 2007
Member since 04/11/2006 🔗
555 posts
Gee, funny you should mention that. Since ski season, I carry my little digital in my pocket in case there is anything of interest to snap. On Friday, April 27 I went to Petersburg to help my Dad put some shingles back on his garage. I came back Saturday morning and as I was getting off of CH I was passed by a firetruck screaming towards Wardensville. He stopped on CH at the top of the hill and started setting up signs and telling everybody to slow down. Here's what I found at the bottom of the hill: 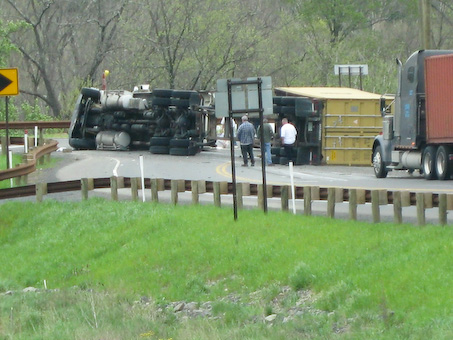 .
The timestamp of the picture is 9:37. It looks like it just happened. Brad - do you know if anybody was hurt?

Thanks for that picture, I was curious if anyone around here had seen it. The way that one side of the guardrail is torn out I knew the trailer had to have flipped over on it's right side which meant either the brakes failed or the trucker was carrying too much speed into the first turn and flipped. It looks like the flipping occurred earlier back with some skidding down to it, or possibly the trailer part swung wide right tearing out the guardrail and pulling the truck over... hard to say.

Either way I've seen numerous trucks come around there on that last turn (where the cab is flipped over in the pic) and carry 5-10mph too much out of that turn and I swore I was going to see one or two tip infront of me. I expect to see another accident like this before next ski season.