Tucker
January 2, 2007
Member since 03/14/2005 🔗
893 posts
It's currently 27 degrees in the valley(atleast at my house)...theres still a dusting of snow on the ground from last night...I just got home and I'm covered with white stuff from today...unfortunately it's drywall dust and is a hole lot less fun the snow,,,,but doesn't melt...

...Jimmi, maybe I should I put my toolbelt down and get a job as a bar tender...what da ya think...

It looked like the forecast said mid 20s last night and the same tonight. Do you know if T-Line got a chance to turn any of the guns on? Hopefully, your answer won't require an "o"

I don't know what the humidity is number wise but it's real clear out and feels fairly dry... and when I licked my thumb and threw the grass in the air the wind was pretty calm(I learned that from watching golf on tv)...cold, dry, no wind...smells like good snowmakng conditions to me...
DCSki Sponsor: Seven Springs Resort

, sure was cold where i was at. Got to do a little car hunting

on my way home last night. Missed the first one but got the second one real good. Bartending, hmmm, you did a pretty good job in your cameo appearance, maybe another calling?

of the season there on jan 2, yup half an inch of powder, drifts up to at least 2-3 inches.

Girlboarder247
January 11, 2007
Member since 01/2/2007 🔗
110 posts
Awesome...I see Tline is still making snow this morning, I hope it continues throughout the evening...I've seen enough dirt chickens for this season

Girlboarder247
January 11, 2007
Member since 01/2/2007 🔗
110 posts
dirt chicken n. skier who runs into muddy patches,stopping them immediately, and, in severe cases, ejecting them from their skis into the mud. Skier usually rolls around in mud trying to gather equipment. Found in mid-atlantic resorts during warm spells.

....just wondering...what would your definition for a box chicken be...

box chicken n. Snowboarder who, while approaching a box to attempt a boardslide, chickens out and does a 50/50. Flapping of arms like chicken wings towards the judges while in competition is a common sign of box chickenitis. Rail chickens are also popular and occur while appraoching a rail instead of a box...I'm pretty sure there are also some rare jump chickens out there as well.

So would Crush's recipe for the wolverine work ok, or maybe we could dust the chicken in dirt and then rub on a nice jerk seasoning??

Clay
January 14, 2007
Member since 04/11/2006 🔗
555 posts
I saw my first dirt chicken today. I was on the lift at T-Line and there it was, flapping around in a puddle off to the side of White Lightning. It was an interesting sight to be sure. It looked like it had gone into that puddle on purpose at a high rate of speed, but then didn't seem too happy about it

It was very hard to find the dirt chickens this morning. It was very foggy on top of the mountain: 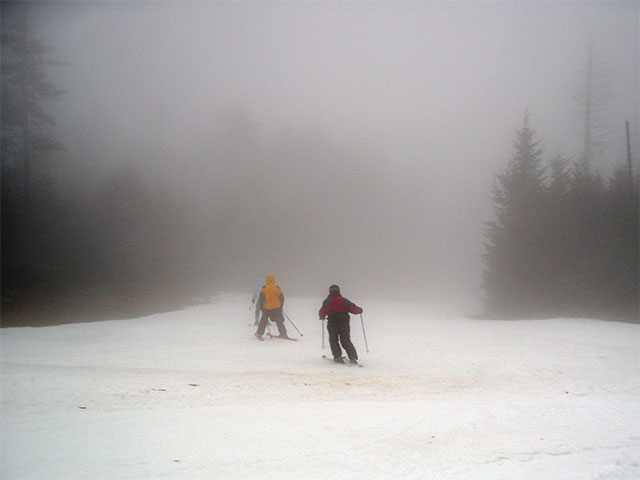 T-Line is doing a great job, but I fear it may be a losing battle. Big sink holes are starting to open up under parts of Sally - there's just too much water running under the slopes - and the mud puddles are coming back to WL. Hopefully we can make it until Tuesday. I'm going to stay up here and prove to myself that it really can get cold up here

The Colonel - DCSki Supporter
January 14, 2007
Member since 03/5/2004 🔗
3,107 posts
In this case a picture (like the web cams at 7 Springs) really is worth a thousand words. I have been wondering where all the posters have been the last couple of days...skiing, I guess. Glad to get a report! I hope to get to TLine later this week if the weather gets cold, they make lots of snow, and, most importantly, open a few more trails before the weekend. By the way, everybody notice that the Canaan Lodge is having a discount promotion for January?!!
The Colonel

. The one I saw on Saturday on the drop was quite a plump little hen

unlike the scrawney rooster walking down WL, skiis and poles in hand....

I can see him now, holding his ice scepter in one hand and the big brown jug in the other, casting the disbelievers into the mud puddles to flounder around like chickens.

jimmy
January 16, 2007
Member since 03/5/2004 🔗
2,650 posts
This will be very popular once Tuscan Ridge gets built out; I'd imagine one of the new feativals in Tucker County will be the Tuscany Dirt Chicken Cook-off:

Wash chicken, taking great care to remove rocks, twigs and leaves, and mud, skis and boots. Brine in salted water 4-24 hours. In a large bowl, combine chicken with 4 oz EVOO, four or five bulbs of minced fresh gahlic (for you not-guidos a bulb is the whole gahlic, not just a clove), rosemary, salt & pepper and allow to marinate 2 hours. Roast chicken @ 375F for 2 hours, allow to rest a minimum of 20 minutes before serving.

I can see him now, holding his ice scepter in one hand and the big brown jug in the other, casting the disbelievers into the mud puddles to flounder around like chickens.

Tucker
January 16, 2007
Member since 03/14/2005 🔗
893 posts
For a fried or crispy version remove rocks, twigs, leaves, skis and boots as you would for tuscan dirty chicken. Then proceed by using a garden hose to remove mud...but leave all carharts, nascar/camouflage jackets, jeans, and or rastafarian/porcupine hats on chicken....and deep fry...best when servd with a cold/delicious...before you fry you should take off the group ticket pass...you can use the wicket as a wish bone...be sure to wish for snow...

Quote:
BWWWAAAAHAHAHAHAHA Murphy were u bin ive missed u

I'll tell you were I haven't been....on the slopes. That's gonna change tomorrow.

And what's with the 50% guido thing? 75% right here...and I bet my great grand parents were pretty dissappointed when my grandmother got mixed up with that cajun boy.

throw a big one on the grill