Clay
November 28, 2006
Member since 04/11/2006 🔗
555 posts
I got a flyer in the mail today from Timberline. I almost didn't read it, but I was glad I did. In the back, they talk about the future expansion that they mention on their website (in conjunction with the Winter Haven 2 development). What was different from what I've seen on the website is that they included a map with the proposed new lift and trails: 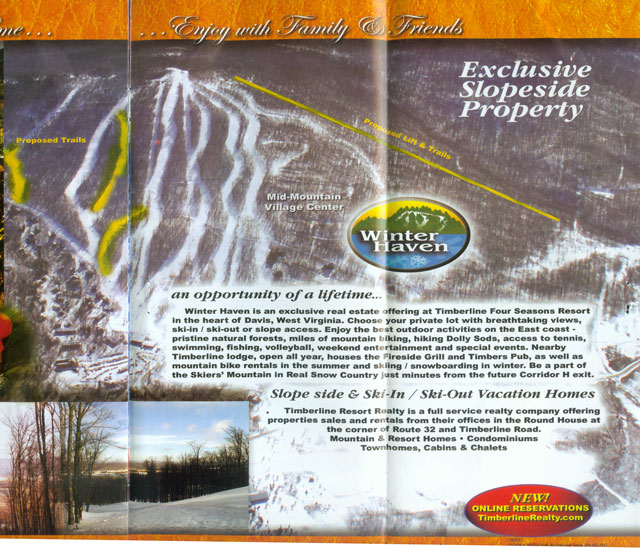 I scaled that down for the post, so if you want a bigger one and are on a high speed connection (it's 2648kb) it's here

There is no timeline given for the expansion. And they need a new picture - this one still has trees between Silver Streak and White Lightning

Roger Z
November 28, 2006
Member since 01/16/2004 🔗
2,181 posts
Hmmm... isn't one of those proposed new runs just the lower part of OTW? Anyway, the real key is the approval process. Anyone know whether Timberline has filed expansion permits for the new lift on the right side? It wouldn't be the first time a ski resort has promised more terrain to lure in potential home buyers.

johnfmh - DCSki Columnist
November 28, 2006
Member since 07/18/2001 🔗
1,947 posts
The issue of re-aligning OTW came up before on the forum. I think this will happen by next season. The trail between Drop and WL is also a possibility.

kwillg6
November 28, 2006
Member since 01/18/2005 🔗
2,042 posts
John has it right. The lift most likely to be moved/replaced would be the old triple since it is at the bottom of the resort and rises to the peak of Herz Mtn. I question the expansion into the western side as well, since we already know that they need much more snow on that side to make it skiable than would the North facing side. However, all this is conjecture at this point, and won't happen unless the real estate sales on the mountain continue.
DCSki Sponsor: Canaan Valley Resort

wvrocks
November 28, 2006
Member since 11/9/2004 🔗
262 posts
Yeah, I think the OTW extension is meant to take the expert traffic out of the mix at the S-turn. Beginners have enough problems with that section of Salamander without the cross traffic coming off OTW. Not that any of them ever look to see if someone is merging but...theoretically. The trail between the Drop and WL looks like it would be pretty easy to do. The entrance and exits are already cut to some degree. Sure would be nice to see that area gladed instead of clear cut though.

The issue of re-aligning OTW came up before on the forum.

I recall the whales versus no whales and grooming versus non-grooming discussions, but I don't recall the re-alignment discussion for OTW. If it was about Timberline, I'm sure it was lively.

From the scanned map it does look a proposed trail bypassing the bottom of OTW (as Roger Z. commented.) Maybe an easier way down (bad move IMHO), or a way to remove traffic from that dogleg section on Sally (reasonable move.)

I'll withhold comment on what's in between OTW and The Drop...

As mentioned on another thread, clearing out some debris to skier's right of Silver Streak would be an excellent idea.

Roger Z
November 28, 2006
Member since 01/16/2004 🔗
2,181 posts
Yeah I see what John (both of them) are saying about OTW. Looks like it will get the skiers off that jig in Salamander, which is a really good idea. The trail off The Drop looks okay, but that new one on the lower mountain... isn't that cutting it awfully close to the glade down there? Are they going to clear it?

More interesting is the west face expansion though. I guessed last year based on the way they laid out the new run that they had a west face expansion in mind. But I'm curious about permits for it and, as has been pointed out, water and capacity for the necessary snowmaking. Also... is this just going to become a giant real estate skiing section like the western part of The Canyons? It's a total letdown to go skiing through mansions.

Quote:
Sure would be nice to see that area gladed instead of clear cut though.

........but darren, if they don't clear cut it how will they get the groomer thru

And regarding permits, this is WV. As long as its private property, T-line can do almost anything it wants to.

The Colonel - DCSki Supporter
November 28, 2006
Member since 03/5/2004 🔗
3,107 posts
I spoke to someone at the TLine booth at the Ski Show and he said the plan was to put a high speed quad where the triple to the top now is and move this lift over to the "new lift" shown on the map.
Hope is is right and it happens soon.
The Colonel

Quote:
put a high speed quad where the triple to the top now is and move this lift over to the "new lift" shown on the map.

That is, by far, the most significant change TL could make and would, I believe, totally alter the skiing landscape in the mid atlantic!

. I likewise hope that they can actually put together the capital to make it happen as it would be GREAT!

. I am a little surprised though that no one has said anything about the "Mid-Mountain Village Center (at 11:00 above the Winter Haven logo). As I was telling my wife "that mountain ain't that big. It could be like skiing through the city..." From the brochure: "Picture a mid-mountain village high on our mountain overlooking the highest valley east of the Rockies nestled between the western ski trails, complete with lodging, summer and winter amenities and a commercial area within the village". Hmmm, maybe they've found some real estate to sell! But I wonder how lodgers are going to get up there. Are they going to build a new road up the mountain?

Also, on the topic of permits, inside the flyer was a little gray fold out with the 2006 rates. What was strange (and somewhat permit related) is that on the back, they have the Hours of Operation and Your Responsibility Code. And then down at the bottom in small print (although to be fair, the same size as the other "small" print on the page) it says:

"Timberline Ski Resort is under special use permit to the Monongahela National Forest for portions of Salamander and selected back country trails".

I have no idea why that is there, but if they already have a permit for some of Salamander and have shown that they are good stewards of the land, perhaps a permit for the western side will not be so hard to obtain...

Roger Z
November 28, 2006
Member since 01/16/2004 🔗
2,181 posts
I once read that Salamander actually partially enters the Dolly Sods wilderness. I've always found that hard to believe, as that would require motorized use (snow groomers) in a wilderness area. Maybe it borders the wilderness?

Does anyone else remember the first season at Whitetail, back in 1992? When they were under that owner, they had a map of the fully built-out ski resort in the base lodge. The Whitetail that existed then (and what we pretty much know today) was about 1/2 of the total terrain that was planned. They had a solid 12+ runs still to go in. But then ownership changed hands- twice- and as far as I know the plans are in the dustbin of history.

The point being, should T-line's ownership change, all of these plans could go up in smoke. Well, the skiing plans could. I'm pretty sure real estate plans will remain forever.

Anyone else ever get the feeling that all we're really doing when we go skiing is paying for the water and sewer installation to new condo units?

fishnski
November 28, 2006
Member since 03/27/2005 🔗
3,530 posts
Yeh Roger, & then when the new owner rents their homes thru TL Realty they are right there to Scarf up almost half of the rental income!....Meanwhile we are still "Chugging" up the MTN on old rustbucket lifts......disgusting...Thats it...I'm sneaking all my beer & liquor into the TL Pub this winter..& I'm going to steal some ribs off of my ole lady's plate on SAT Nite Rib nite!! I'm fighting back!..I'm poaching rides on the lift & dumping my trash in their dumpster...what else?

Quote:
We'll be skiing under bridges with big signs saying, "The Colony," on them and mini mansions everywhere.

And regarding permits, this is WV. As long as its private property, T-line can do almost anything it wants to.

As long as the deliver 350" powpow and install some back country access I won't mind.

johnfmh - DCSki Columnist
November 29, 2006
Member since 07/18/2001 🔗
1,947 posts
Portions of the top part of Sally are part of the National Forest. That's why Timberline can't put any lights on the upper portions of the trail, effectively shutting it down for night skiing. You'd have to ask the national forest service about the Wilderness boundary. I was always under the impression that the wilderness boundary is FS-80, which also runs through a section of the National Wildlife Refuge. There's really not much more land that Timberline can develop at this point. The whole idea of a mid-mountain village sounds like fantasy to me. At best, they might be able to put a small lodge mid-mountain but not a village.

tommo
November 29, 2006
Member since 01/16/2004 🔗
303 posts
The Dolly Sods Wilderness Area boundry is about 200 yards or so to the northeast of Salamander. I believe the closest point is where Sally makes a hard left down the fall line after running the edge of the ridge for about 1/4 mile. If you cut into the woods to the skiers right just before the turn, you'll hit the forest road in a bit. Go north on the road and the Wilderness area contact sign will be just ahead on the right. Follow the Stone Coal Run trail to the east and you will shortly cross the Wilderness Area boundry.

kennedy
November 29, 2006
Member since 12/8/2001 🔗
792 posts
Why even bother with a mid mountain lodge? It's not like it's massive western mountain range. Sounds like a waste of space to me but then again what do I know.

dmh
November 29, 2006
Member since 12/11/2003 🔗
127 posts
There has to be 1) a financial advantage of a midmountain lodge that I just don't see or 2) they are only saying this for PR purposes (makes it look like a bigger mountain/more amenities) to lure potential real estate buyers. I can't imagine they would build anything approximating a lodge, maybe a small structure for food, drink, restroom, but then, why bother. Makes no sense and like many things TL, probably not reality based.

kwillg6
December 1, 2006
Member since 01/18/2005 🔗
2,042 posts
On the topic of a mid mountain village/lodge.... In my line of thinking, that could mean a porta-pottie, a warming hut, and a hot-dog stand. I don't know why they would even consider something like that with their dire need for a modern and larger base facility.

More interesting is the west face expansion though. I guessed last year based on the way they laid out the new run that they had a west face expansion in mind. But I'm curious about permits for it and, as has been pointed out, water and capacity for the necessary snowmaking. Also... is this just going to become a giant real estate skiing section like the western part of The Canyons? It's a total letdown to go skiing through mansions.

Not if people put in low-level decks. Mmm... imagine those freshly-laid, non-warped wooden railings. And of course, I'd be all for a mid-mountain lodge/conf-center... just another roof to wallride.
DCSki Sponsor: Canaan Valley Resort