) I went up on Friday and took 42/93 out of Petersburg. When I got up past Mt. Storm at about 13:00, it started snowing. Ok, it started raining with snow mixed in. By the time I get near the 93/32 turn, it was probably 50/50 and by the time I got through Davis, it was more snow than rain. Granted it was light, but it was a really pretty drive from Davis to about Canaan Heights - the trees and grass on the side of the road had a nice light covering on them. It pretty much stopped after that. I didn't think about it until 17:30 when I headed over to Petersburg to take my parents to dinner. It was coming down! Well, it wasn't a blizzard, but it was coming down hard enough that you couldn't turn your high beams on because of the reflection. It continued until I got around Dry Fork.

Sorry I didn't get any pics - I just didn't think to grab the camera. All weekend it stayed in the 30s and while driving in and out of the resort, I noticed there was snow on the ground over at Canaan. I think it's at the top of Valley Vista, but I'm not super familiar with the slopes over there, so someone else could probably correct me. If the fog lifts, I would think you could see it from the Dolly Sods webcam.

Finally, after spending an additional day that I hadn't planned on (what can I say, I work slow

) I dug the camera out and took a couple of pictures that may be of interest to the TL fans.

Here is the new White Lightning

Here is a couple of shots of where the surface lift for the park will be. 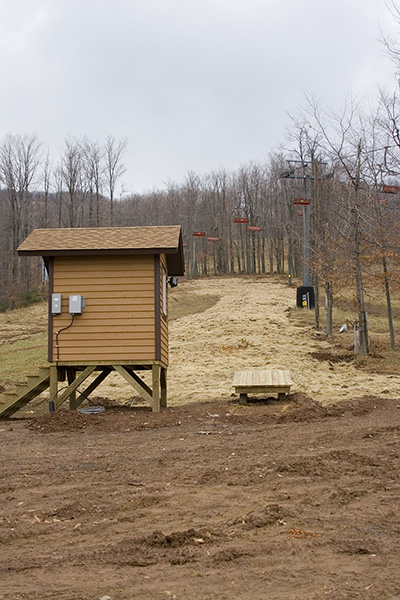