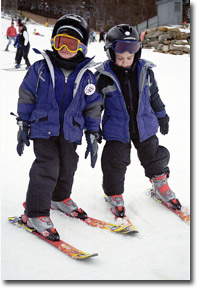 It’s hard to ski every weekend when the closest ski resort is nearly 1,000 miles away! Around Thanksgiving time, resort openings came and went. A ski buddy of mine offered to let me use his house at Timberline, but my family didn’t want to be out of town over the Christmas holiday. I was stuck! The only skiing readily available to me would be on nearby Lake Jackson. Thankfully, my cousin Dart came to the rescue. He organized a mini-family reunion at my great-aunt and uncle’s house at Virginia’s Massanutten Resort over the Martin Luther King holiday.

The warm temperatures in early January and the thought of melting snow gave me nightmares before the trip. However, Massanutten survived the thaw well. Ten or eleven slopes were open before Mother Nature decided to play mind games with winter sports enthusiasts. When temperatures finally cooled back down, the warm weather had caused the closing of only a few slopes. The most astounding fact came two or three days after Mid-Atlantic resorts turned the snow guns back on. The “Nut’s” snowmaking crew had worked overtime! In a matter of days, they blew enough snow to open every slope on the mountain. Country Estep, a snowmaking pump house operator at Massanutten, told me that 22,140,900 gallons of water had been converted into snow at the resort during the first eleven days of January.

I looked forward to hitting the slopes until a blast of cold air hit me while exiting a Southwest Airlines flight from Orlando to Baltimore. Twenty-one degrees is cold!

Massanutten is located 8 miles from the college town of Harrisonburg, Virginia. In optimal driving conditions, when the sun is shining and the sky is blue, the drive to Massanutten from the Beltway takes less than two and a half hours. We drove through farmland and small towns, and passed the Insurance Institute for Highway Safety Vehicle Research Center in Central Virginia. The expert slopes Diamond Jim and Paradice can be seen from the valley below as visitors approach the resort. Though the ski slopes do not face the highway, the mountain’s unique bowl shape allows the expert slopes to be seen.

I skied for two and a half hours Friday afternoon. Never having skied the Nut before, I felt like an explorer whenever I skied a new slope. The snow was soft, but not as fast as it would be later in the weekend. I spoke with several skiers while waiting to ride back up the mountain. They said that the layout of beginner, intermediate and advanced terrain was easy to remember. Beginner terrain is on the left hand side of the mountain. Southern Comfort, a long bunny slope, connects the advanced and intermediate terrain with Geronimo. Geronimo isa wide slope with just enough pitch to give beginners the feeling of “real” skiing. Intermediate terrain is located between the beginner and advanced terrain. Many skiers at Massanutten are beginners or intermediates, and thus, I appreciated the way each type of terrain was well labeled and generally segregated.

The ski patrol at Massanutten is very professional. I was riding the intermediate lift, chair #5, with a patroller. He was riding the lift to the top, but noticed several skiers having difficulty putting their skis on after a crash. He exited the lift at mid-station and skied down the hill to make sure the skiers were okay.

The ski patrol makes the last ride up each lift at 10:00 p.m. They make sure all skiers and boarders are off the mountain. As they ski down, the patrollers remove bamboo poles and plastic fences that warn skiers about obstacles to avoid. The real work begins once the slopes are clear of skiers and obstacles. If temperatures are cold enough, the snow makers will blast the slopes with manmade snow. The mercury often dips very low late at night when the snow makers do their thing. To stay warm, they wear thick jackets and specially-coated rubber gloves that allow the crew to open air and water valves, without getting wet. The crewmembers operating guns are in constant radio contact with the pump house operator. As more guns are turned on, the pump house operator adds more air and water to the system. Each night, over two million gallons of water can be sent from the pump house to the snow guns at Massanutten. 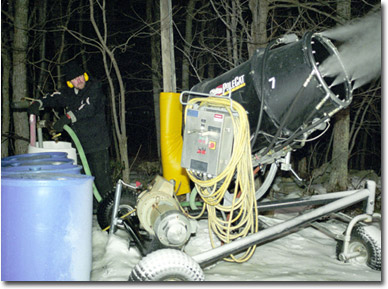 The grooming crew begins working shortly after the snow guns come on, or around 11:00 p.m. Massanutten has four Bombardier snow groomers. The newest, a DR-350, was added this year, and I was given the opportunity to ride in it. The groomer was warm, had a radio, and the windows never fogged up! At the summit, Hank Hensley, the driver, positioned the groomer so we could see several towns in the valley. The view was breathtaking!

Hank is often the only groomer working the slopes into soft, even corduroy. He usually finishes grooming all fourteen slopes and trails by six or seven in the morning, even with all of the work changing conditions can bring. Hank will sometimes reverse-till the snow, which helps to break up icy spots. At other times, he removes large piles of snow so skiers can see downhill and avoid any person who has fallen down.

I didn’t wake up early enough on Saturday to make first tracks on the snow we had groomed the night before. I arrived an hour later, at 10:00 a.m., and the snow was still in excellent condition. The small ridges from the groomer were still visible. Many skiers commented that the conditions were excellent. In fact, I made several runs downhill in a giant slalom fashion.

My cousins and I made run after run down Paradice and Diamond Jim. The only thing that kept our legs from failing was the seven-minute ride back to the top on chair #6. By noon, most of the soft snow had been pushed to the edges of the slopes. The center of each slope was still skiable, but we had to work hard at times to keep from losing control of our legs. Fortunately, both slopes were wide enough for us to stop and rest on the sides without getting in people’s way. My mom and brother said the conditions on Geronimo and Rebel Yell were nearly the same. However, the ice wasn’t as bad and, despite the cold, they really enjoyed the conditions.

From the bottom of the mountain, Chair #4 is the quickest way to get to the expert slopes. Even at 2:00 p.m., the lift line was close to ten minutes. Unfortunately, the singles line was being treated as a normal line. It felt like the wait took forever! Most people were very friendly, and we talked about DCSki, life in Washington, and the lack of a lift line at the expert lift.

My cousins and I made several runs down Rebel Yell and Dixie Dare before heading back to Diamond Jim and Paradice. The slopes were still icy, but I had no problem skiing them. A light snow started falling around 4:00 p.m. Saturday afternoon. Of course, the snow stopped falling as soon as I said “Hey, it’s snowing!” Precipitation returned around 8:00 p.m., but it was rain. Not wanting to get drenched, I headed to the house. We ate dinner and changed into our bathing suits.

Massanutten has five pool complexes. We went to Le Club, and spent nearly an hour in the hot tub. Surprisingly, more people were in the pool. Ski Area Assistant Manager Kenny Hess told me that the resort’s board of directors recently approved plans for a $20.5 million, 120,000 square-foot indoor/outdoor water park that will hopefully be constructed by 2005.

My cousin Dart and I were afraid that the weathermen might have predicted Sunday’s forecast accurately on Saturday night. Fortunately they were wrong and the rain that was predicted lasted for less than half an hour on Sunday afternoon. The slopes were soft in the morning. Temps were in the 40’s and some people weren’t even wearing jackets! I managed to stay awake after lunch, and the rain arrived shortly after my cousins and I returned to the slopes. We pulled up our hoods and buttoned up our coats to stay dry. “We’ll see if Gortex really works!” Dart commented. The rain brought cooler temperatures, and the snow firmed up.

Even though my lift ticket was good until 10:00 p.m. on Sunday, I decided to leave with my cousins at 4:30 to enjoy the warmth of the hot tub. My plans changed shortly after I arrived at the house though. Eric, my cousin from North Carolina, decided to spend several hours skiing Sunday night before heading home on Monday. Eager to ski a little bit more, I headed to the slopes with him. We warmed up on Geronimo, and then moved to Rebel Yell. The conditions on Rebel Yell were very nice Sunday night.

Monday morning I woke around 8:00, ate breakfast, and packed my things. We left the mountain at 11:30 a.m and I noticed the slopes were nearly empty on Martin Luther King, Jr. Day. In Virginia, MLK Day is not a school holiday, so the slopes will never be as crowded at Massanutten as at other Mid-Atlantic resorts.

As the Southwest Airlines Boeing 737 ascended into the sunset over Baltimore, I regretted having to return to Florida. Vacations, especially those that involve skiing, are always fun. Wouldn’t it be great if we all got paid to play?!

Jarrett Baker is a columnist for DCSki. When not skiing on water or snow, Jarrett is a photographer with the Highlands County News-Sun, and a freshman at the University of Florida. You may visit Jarrett's web site here.

JimK
January 29, 2004
Wow, I never got a ride in a snow groomer! From '86-'99 I lived 75 minutes from Massanutten and used to visit a couple times or more every winter. Given the often uncooperative weather of their Southeastern location, I was always very impressed with their snowmaking and grooming abilities. Wonder if they've ever considered adding more trails up by Paradice? I bet the snowmaking crew would be game for that challenge. Nice photos.

Jarrett
January 29, 2004
Jim, the plan is to continue replacing the old lift with new triples or quads. After that is done, the possibility exists for terrain expansion. It would be nice to have additional expert terrain at the top. I think the capacity of the snowmaking lake would have to be increased, and more guns acquired for new terrain to be cut.

Jarrett
February 2, 2004
Thanks for the compliment! It is a beautiful resort - especially at night.

Dick A/
February 3, 2004
Jarrett - Great story of your mountain adventure at Massanutten recently. Pictures were crisp, clear and informative. Keep up the good work.