Wait! What? We still have COVID-19. I guess it’s another season of wearing a face covering while skiing and not getting frost on my nose. For the fourth season in a row I’m heading out to Steamboat Springs, Colorado. If it’s anywhere as good as the last COVID-19 year, it’ll be phenomenal.

Steamboat Springs is really like four mountains plus a backside with plenty of off-piste options. In all, there are total of 165 trails and 2,965 skiable acres. 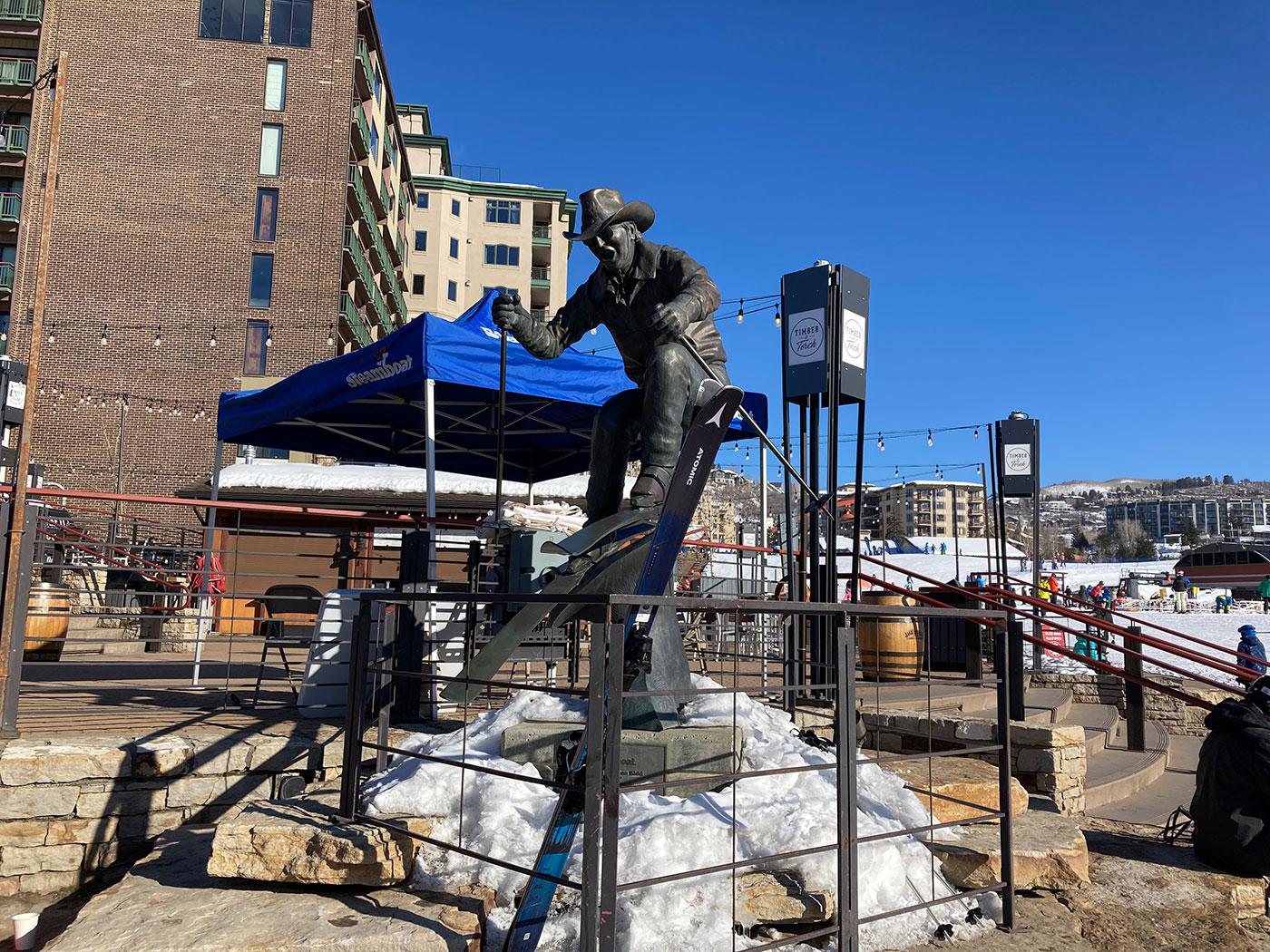 The base area of Steamboat. Photo by Matthew Graham.

My good friend Mel and I meet up at her mom’s condo each year. Our first day of skiing is usually a weekend day. And as we all know, lift lines on weekends can be treacherous! So here’s your guide to navigating the many peaks at Steamboat on a Saturday or Sunday and spending more time skiing then standing.

First — get there early. My friend Mel and I are booted up and out the door at least 45 minutes before the lifts open at 8:30 a.m. It’s about a ten minute walk from the condo to the base of the mountain. That gives us over a half hour to use the restroom and buckle up our boots.

There are always people in line at the gondola even a half hour before it opens. So tip number one is to AVOID THE GONDOLA. And avoid it until the last hour of the day!

Instead, trudge on over to the Christie Peak Express. There will be a line there too. But it moves much faster than the line for the gondola. The high-speed six-pack lift zooms skiers halfway up the mountain.

Check your watch after you get off the lift. The Thunderhead Express lift opens at 8:35. If by chance the Christie lift opened early and you are at the top before 8:30, take the blue slope Vogue, which connects to a green trail, and return to the Christie Peak Express. Odds are the lift line is less crowded than before because the initial wave of skiers has already been loaded up and they have moved onto other parts of the mountain. 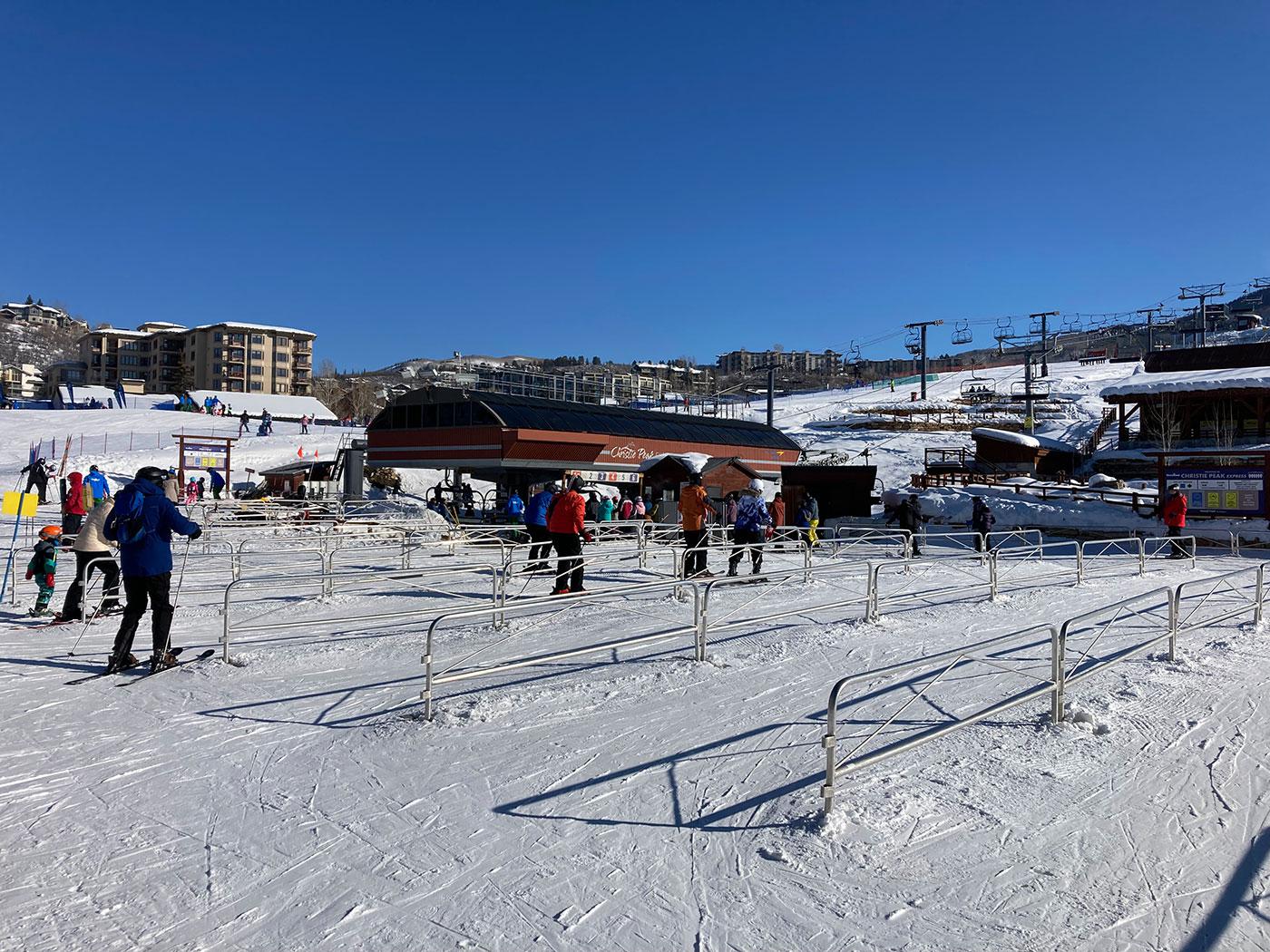 The Thunderhead lift serves a variety of fun blue and black slopes, as well a long and serpentine beginner trail called Why Not. Mel and I usually jump onto the intermediate run Vagabond that leads back to the base of Thunderhead. The long, wide trail has a couple of steep sections that’ll make even an expert skier happy — or challenge a skier or snowboarder who loves to “cruise the blues.” Taking Thunderhead back up and shooting across the top of the peak and beyond the Thunderhead Lodge (at 9,080 feet) provides access to the Sunshine Peak trails and lifts.

The green Spur Run cuts through the trees and down to the Sundown Express. Our goal is to arrive at this lift at around 9:10-15. The lift opens at 9:00 and the first queue of skiers has generally cleared out by the time we get there.

The trails and slopes on Sunshine Peak seem to be the most popular on the mountain. By 10:30-11:00 on a weekend, the lift lines at Sundown Express and Sunshine Express are packed and stay packed until the end of the day.

There are blues, blacks and a blue/black, called Two O’clock, which is one of Mel’s favorite slopes. We try to juice out as many different runs as we can on this section until the horde of Sunshine lovers turn the lift lines into parking lots. Once that happens, we escape the scene via the old school triple lift South Peak. The lift tops out adjacent the Rendezvous Lodge — an excellent spot for a late morning bio-break.

Leaving the lodge, a very flat and aptly named South Peak Flats trail connects to the green run Broadway and two “steep as steep can be” black diamond slopes, Rolex and Westside. Westside is often groomed while Rolex is usually bump city. I’m not the best bump skier. So, of course, Mel shoots straight down Rolex so she can watch me suffer. From the bottom of Rolex we say goodbye to the Sunshine area via the Elkhead Express Quad.

From the top of Elkhead, you can connect back to the Thunderhead Peak and continue onto the base of the mountain. However, we are trying to make it to the backside trails. To do this, follow the signs towards the Storm Peak Express and effortlessly swoosh your way down the intermediate Rainbow slope to the express quad.

The lift takes skiers and riders up to Storm Peak at 10,372 feet. From here you can readily get to almost any other part of the resort. 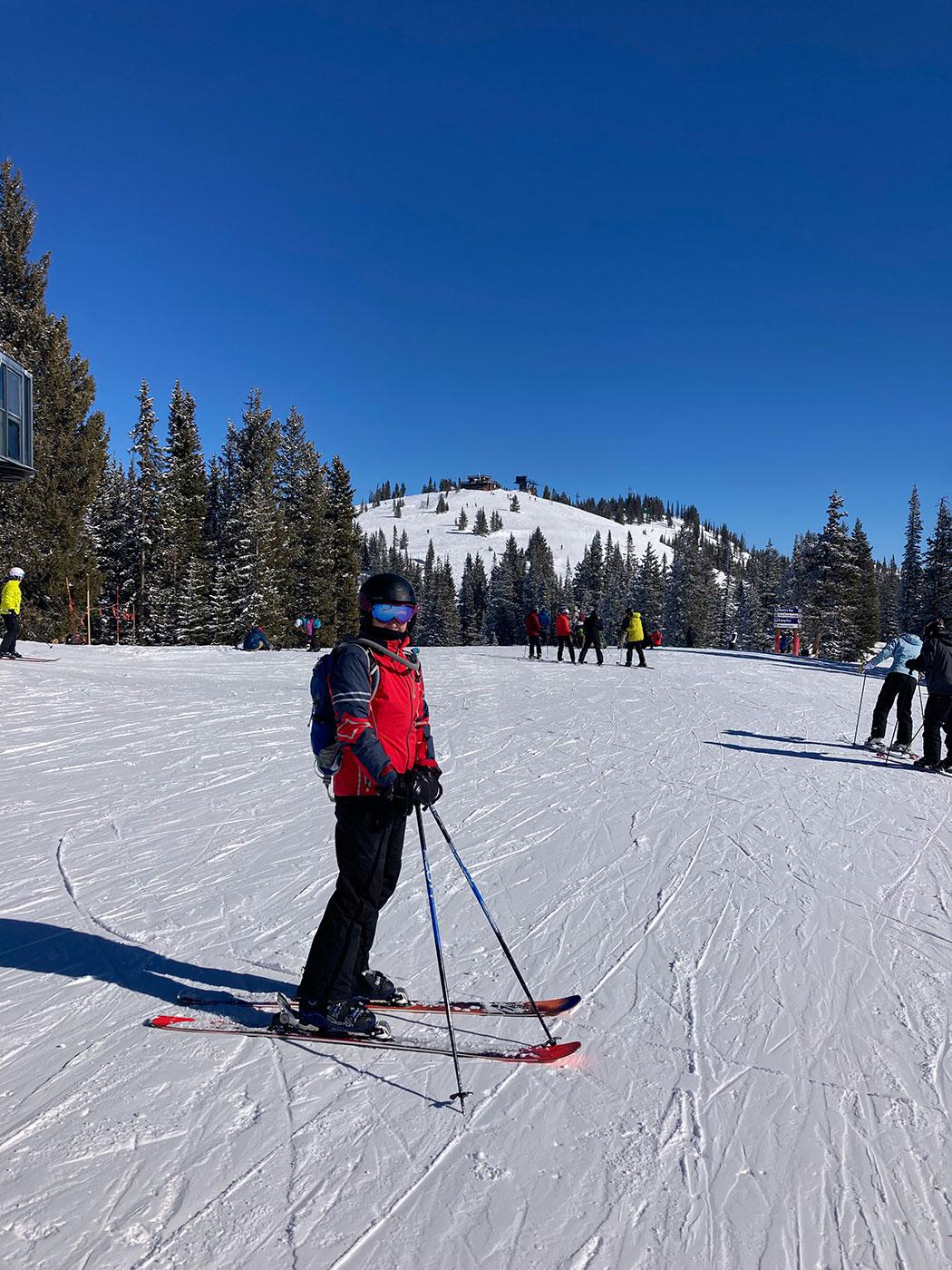 Mel and I steer towards the backside from the blue run Cowboy Coffee. There are tons of options for skiing in the trees. I’ll pop into and out of the trees a little. However, I still find skiing close to the trees to be a bit out of my league — and I keep thinking of Sonny Bono and Michael Kennedy — who both died from skiing into a tree.

Fortunately, there are also some wide open areas on the backside if you are feeling a bit of dendrophobia (fear of trees). Only one lift services the backside of Steamboat — the Morningside Triple — and it is not high speed. Consequently, there will be a line for the lift.

However, the wait isn’t usually that long and the vibe is much more relaxed than on Sunshine Peak. There are birds singing and flying around and everyone has that backside chill. And “Don’t Feed the Birds” as the signs near the lift warn.

From the top of Morningside, there are two blue slopes leading to the base of this lift — and lots and lots of options for playing amongst the trees. But to get to the two blues, you have to make your way down a short advanced-rated bowl. There are some bumps. However, it can be negotiated by an intermediate skier who knows how to take his or her time. From the bowl I like to hop onto the intermediate trail Snooze Bar and meet Mel back at the bottom of the Morningside Lift.

By now it is usually after the twelve o’clock hour. I often mention to Mel that maybe we can take a break for lunch. And she just gives me this look that says “we’re not wasting lift ticket money sitting around inside having lunch”.

The top of the Morningside Lift also returns skiers to the main face of the resort. The view from the top of the lift is quite dramatic — snow-covered peaks out to the horizon. It literally feels like being on top of the world.

A large number of double diamond chutes and glades can be accessed from this peak. But… no. We take either the short and sweet black run Corridor or the blue Over Easy run to connect with Buddy’s Run, which is a by-the-books intermediate slope that requires no thinking. I just let the skies do their thing and disengage my brain.

If you ski below the Four Points Lift, the options are Storm Peak and the Burgess Creek Triple lift. Slow down or stop next to Burgess to check out the line for Storm Peak. If the line isn’t bad on Storm Peak, continue down to the quad. Otherwise, the Burgess Creek triple is rarely crowded and offers skiers a choice of about a half dozen blue and black runs that lead back to its base. 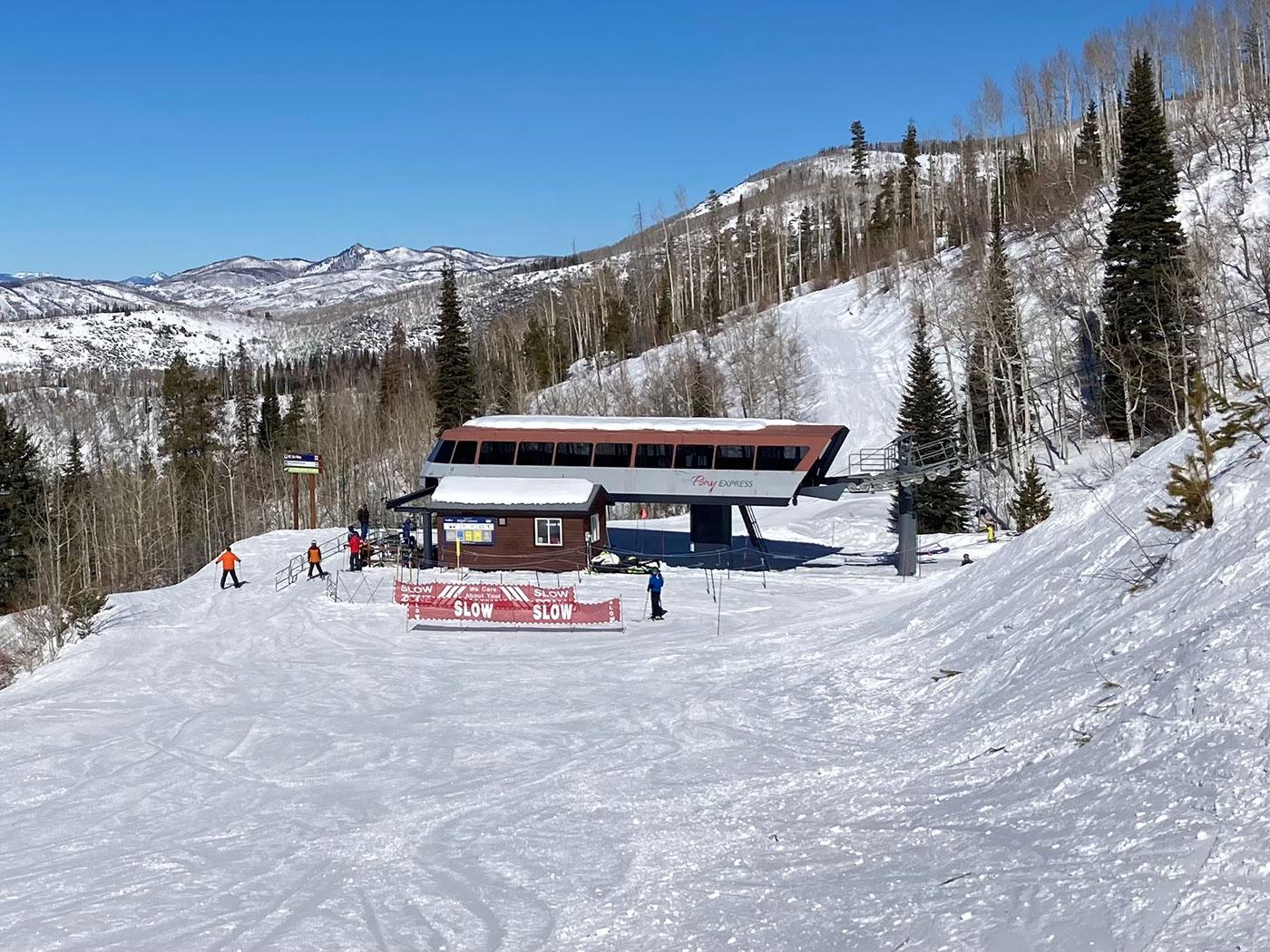 After mixing it up on Storm Peak, Burgess or Four Points, continue past the bottom of Storm Peak down the green trail BC Ski Way to the Pony Express Quad. Most skiers ski right by this lift because they are in “going home” mode on their way back to the main base. It’s so weird! The lift is right there and somehow still invisible.

Consequently, there is rarely any line at this lift. And this lift services my favorite part of the resort. There are groomed black diamond runs, bump runs and a couple blue/black high speed cruisers. I could easily spend a couple of hours here. And usually we spend at least an hour here going really fast like a couple of dumb kids racing down the steep terrain.

These trails connect to a variety of different slopes on the bottom half. My favorite route is Valley View to the black Lower Valley View. There is a sign at the top of Lower Valley View cautioning skiers that it is for expert skiers only. However, it is not that bad and there are many other black runs that are much steeper and more difficult on the mountain.

We finally get down to the gondola at around 3:00 p.m. Sometimes there is still a line for the lift. But generally things have quieted down by three. For the next hour we ride up the gondola and then ski all the way back down. Up and down ‘til the gondola closes at 4.

It’s a day of skiing — not a day of standing in line! 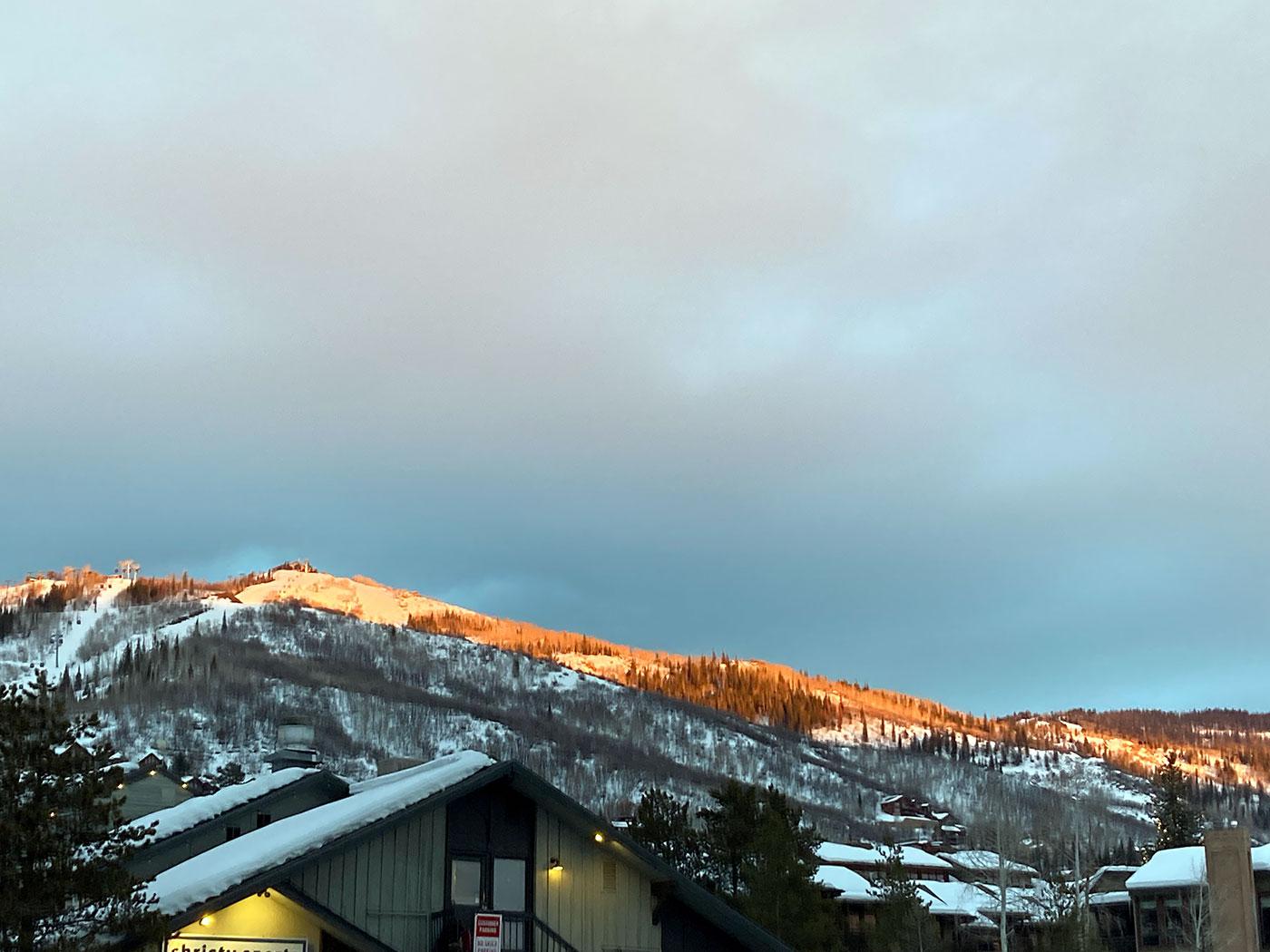 itdoesntmatter
11 months ago
Member since 01/17/2007 🔗
147 posts
This is great, I'm heading out there Sunday to ski for a week.  The forecast this week looks good so far, should freshen things up. 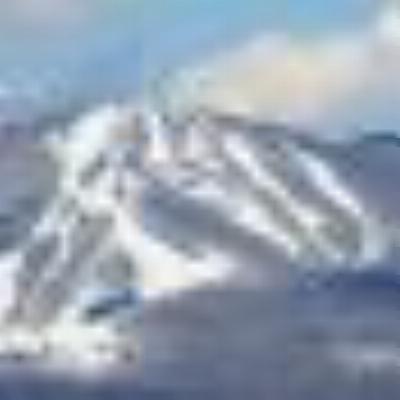 itdoesntmatter
10 months ago
Member since 01/17/2007 🔗
147 posts
The gondola line was usually the longest line that I encountered.  Midweek, it was probably less than 10 minutes.  Even today (Saturday) it was less than 15 minutes.

one month ago
Member since 02/23/2005 🔗
882 posts
We visited during the spring break period last year so have a few thoughts.  Go early and take the shortest line from the village as soon as possible and don't come back until end of day.  The old gondala liftline might look long but it moves fast.  The NEW gondola this year might be a game changer.  The three fixed grip lifts on the Four Points side are often a better choice than the Four Points express.   Pony Express never had much line and serves great terrain.  Sunshine and South Peak  can get long in a hurry so be prepared to bail and take one of the clocks over Sundown express and maybe back over to Morningside; Elkhead is often overcrowded.  Pack lunch and grab bevs and snacks from the outside shack at Four Points makes an awesome lunch stop.