It had been a minute since I last skied.

Over a million, in fact.

My last day on the slopes was on February 13, 2020 at Colorado’s Beaver Creek Resort.

And then the pandemic hit. That squelched my ski plans last season. And with the Omicron variant surging in recent weeks, I was a bit tentative to ski this winter — especially after seeing pictures of weekend crowds at many Mid-Atlantic resorts.

But with almost two years and 1,036,800 minutes elapsing since my skis last touched snow, I pointed my car west and headed to Pennsylvania’s Whitetail Resort. Along the way, I briefly wondered whether I would even remember how to ski. 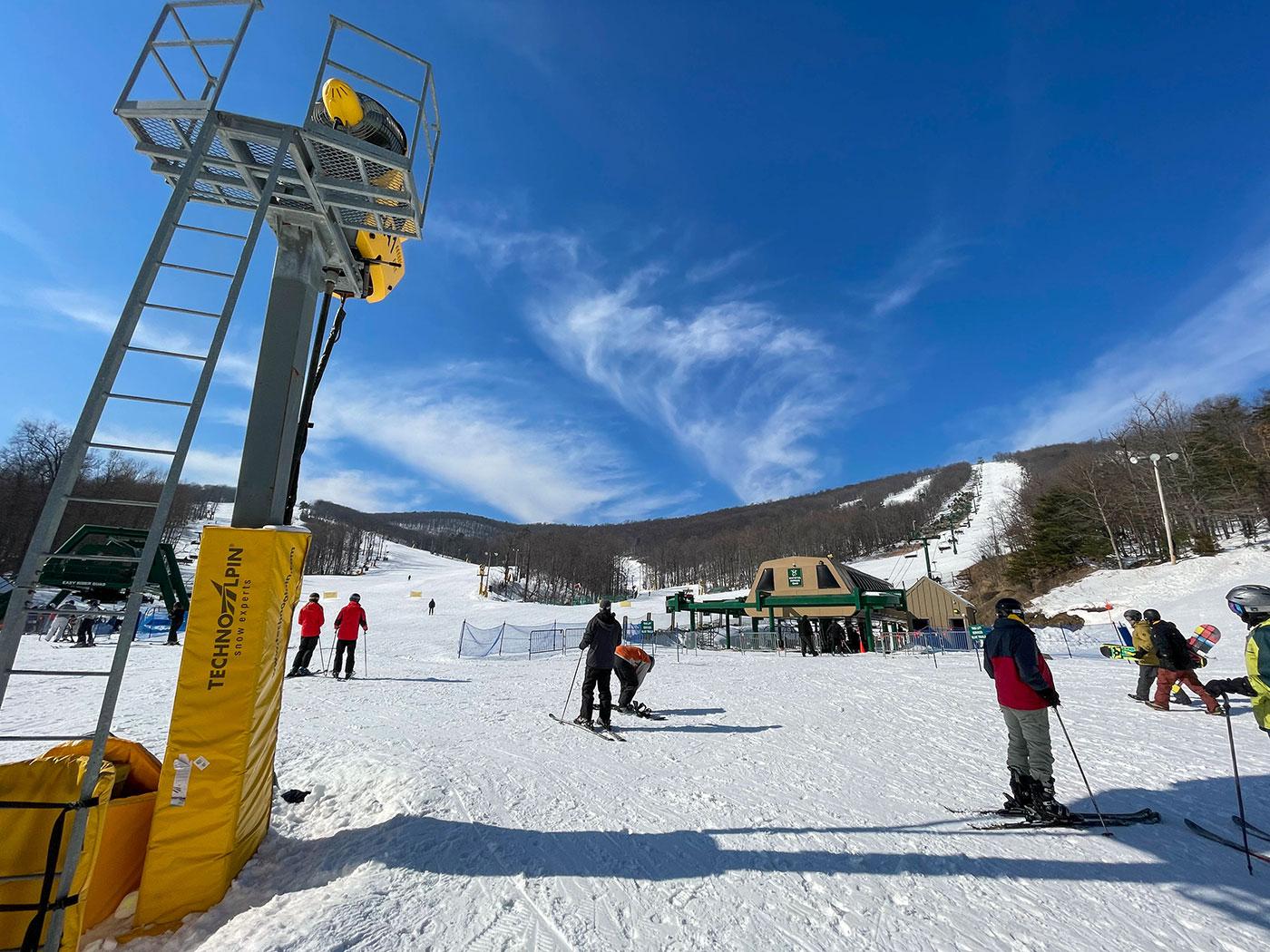 West of Frederick, there was plenty of snow on the ground from recent storms. Along the final stretch to Whitetail, I passed by Blairs Valley Lake and counted over a dozen ice fishermen scattered across the surface of the ice, patiently waiting for a bite. For a moment I wondered if I had put Minnesota into my GPS as a destination rather than Mercersburg.

That Blairs Valley Lake was a viable spot for ice fishing is a testament to the change in fortunes that have occurred in the past month for Mid-Atlantic ski areas. Unseasonably warm temperatures in December limited snowmaking and delayed openings; mere weeks ago, Whitetail barely had a couple trails open.

Then the mercury dipped and Whitetail fired up its impressive snowmaking system. Along the way, Mother Nature provided a few helpings of natural snow. With sustained cold temperatures, Whitetail was able to build up its base and open all terrain over the past couple weeks, quickly catching up and delivering solid mid-winter conditions.

As I arrived at the resort on a sleepy mid-week Wednesday, I was happy to see plenty of empty parking spots, lifts carrying (mostly empty) chairs up the mountain, and even snow in the trees between the trails. It’s always nice when snow covers the entire mountain, not just the strips of the slopes. 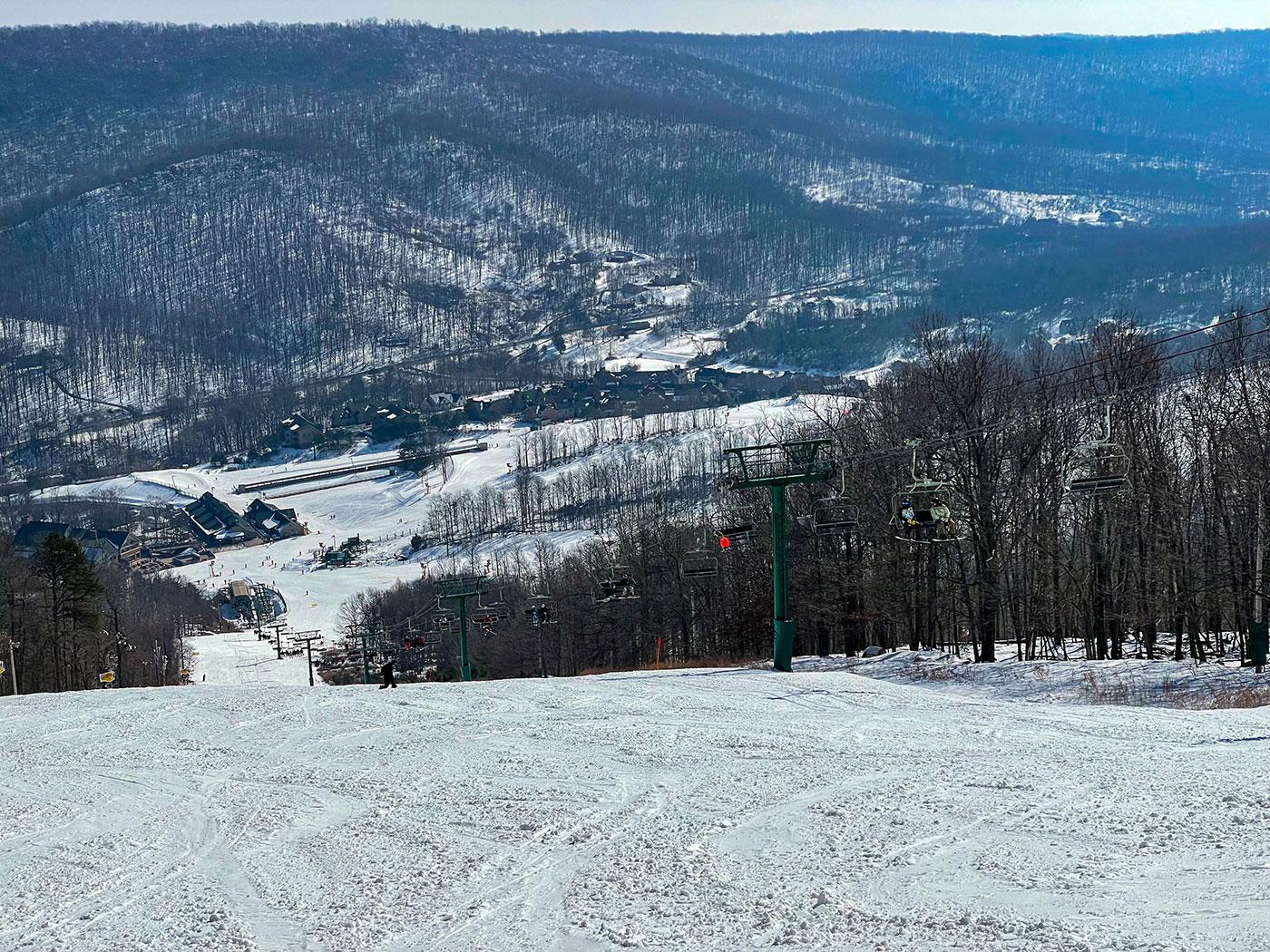 Whitetail has always been my “home” mountain; after spending my childhood cross country skiing, Whitetail was the first downhill mountain I ever skied. In recent years, Whitetail has undergone some changes — or more specifically, changes in ownership, bouncing from Snow Time to Peak Resorts to Vail Resorts. I was curious to see how the new ownership — as well as the challenges of the pandemic — have affected my home hill.

Upon arriving at the main entrance plaza, I was immediately greeted by two friendly employees who were scanning Epic Passes right at the top of the steps. They directed me to the Guest Services office to pick up my pass. In contrast with early-season reports of massive lines to pick up passes, there were no lines today. A few minutes later, pass in hand, I headed back to my car to gear up. 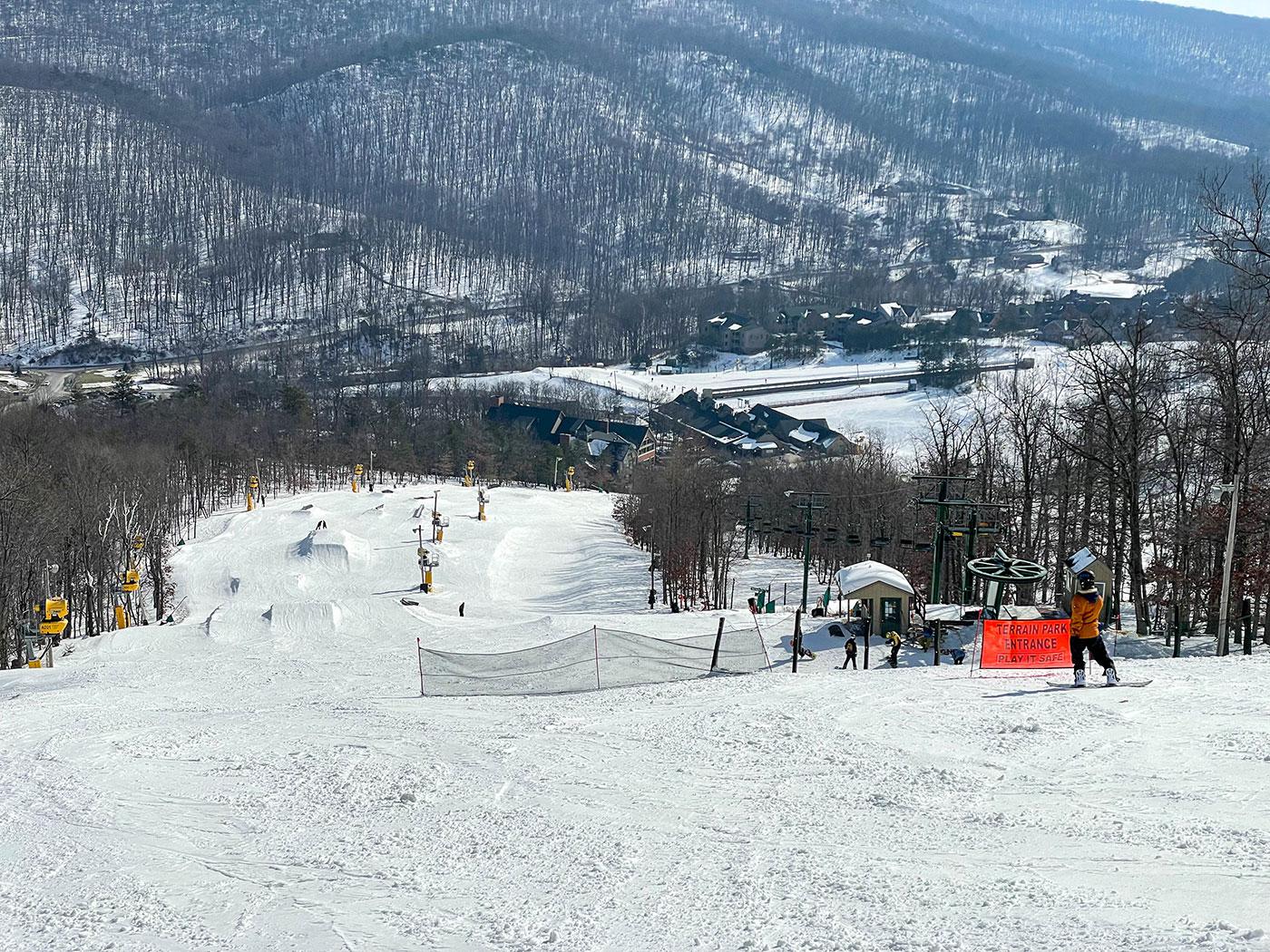 My first run was Limelight, which parallels the Whitetail high-speed lift. Snow conditions on Limelight — and every subsequent slope I sampled — were sublime. The weather was pretty perfect too: sunny blue skies with temperatures rising to around 40 degrees. I only saw a few thin spots across the mountain, and while some trails got slightly sticky as the afternoon sun warmed them, there were plenty of primo conditions to find.

Even better, crowds were non-existent. There were never more than a few people in the lift line ahead of me, and in most cases I could ski right onto the chair. There was also never a need to share a chair. While I’m not anti-social, the thought of cramming into a chairlift with several strangers during a pandemic isn’t exactly something I’d go out of my way to do. So I was happy to have solitary and quiet lift rides to the top of the mountain. 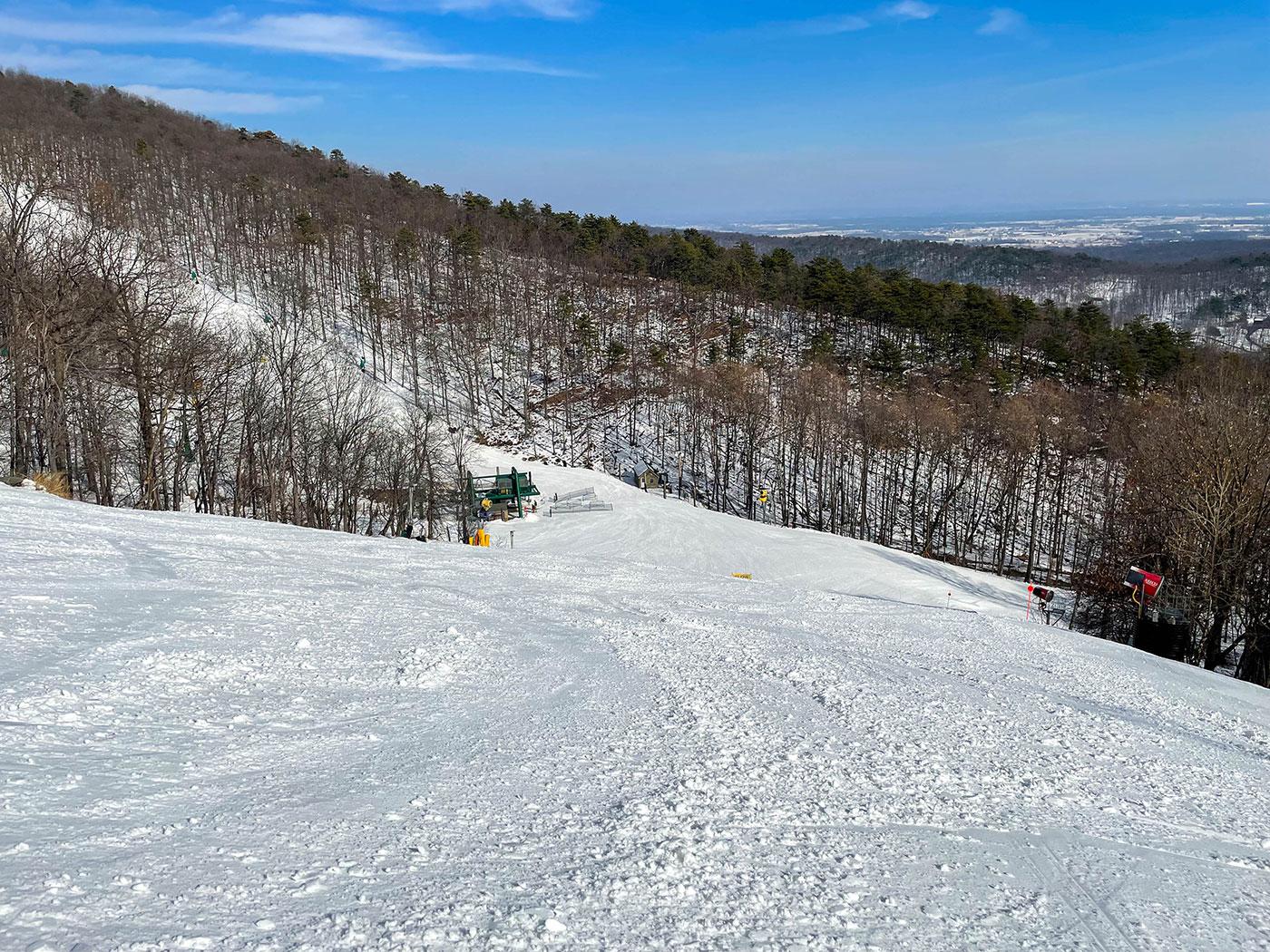 Dropping in on Drop In to Whitetail’s expert terrain. Photo by M. Scott Smith.

And now, a moment of silence.

Let us all spend a minute reflecting on a young trail that has left us too early.

Barely a decade ago, Whitetail cut a new trail called Ledgewood, moving 80,000 cubic yards of earth in the process. Veering off the right of Snow Park near the top of the EZ Rider Quad, Ledgewood did something few other slopes at Whitetail do: it turned. Kind of sharply. While most slopes at Whitetail are of the “wide, but straight down” variety, Ledgewood surprised skiers with a sharp left turn before experiencing a long, flattish runout to reconnect with Stalker. It was also a fun trail, as long as you kept your speed up for that long runout.

But it appears Ledgewood may be no more.

Whitetail has made no attempt to cover it with snow this winter, and eagle-eyed DCSki readers noticed that Ledgewood silently disappeared from Whitetail’s official Lift and Status Report in recent days.

Like the left third of Limelight, it appears that Ledgewood might be allowed to go back to nature. As one DCSki contributor to the DCSki Facebook community said, perhaps we should refer to it as Schrödinger’s Ledgewood: a trail that is clearly there but also not there at the same time. 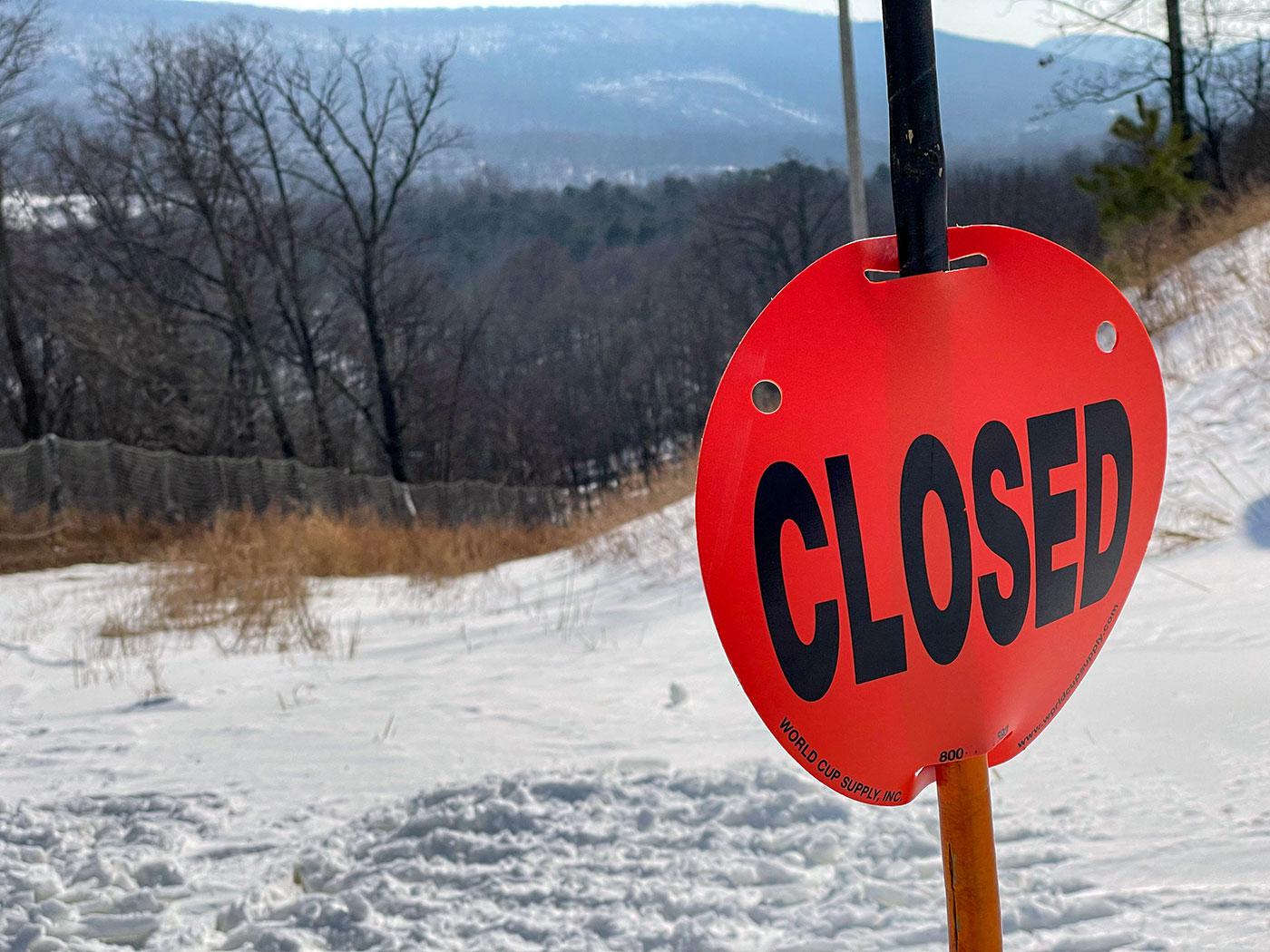 Raise a glass for Ledgewood. Photo by M. Scott Smith. 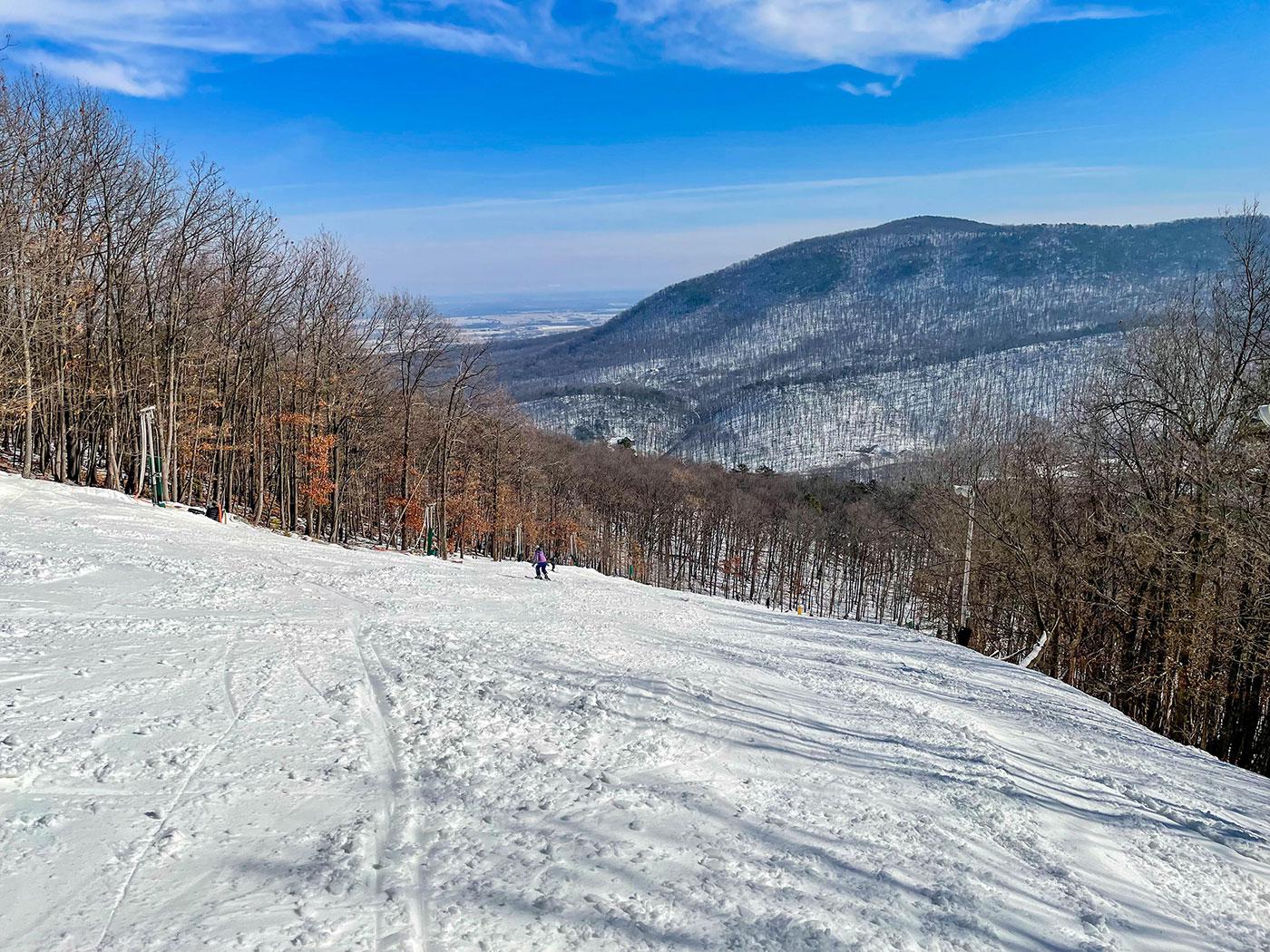 Far Side, always a favorite. Photo by M. Scott Smith.

The snow on double-black Bold Decision was about as perfect as I could ask for, definitely taming the slope compared to when the middle portion is ice-covered.

I must admit I skipped Exhibition, which had bumped up nicely with moguls. I was up for it, but my legs said “on your first ski day in two years? I don’t think so.”

In case you’re wondering, the collection of Mardi Gras beads (and a pair of shoes) still decorate some of the trees between Towers 6 and 8 of the Expert’s Choice Quad. No detail escapes DCSki’s crack team of writers. 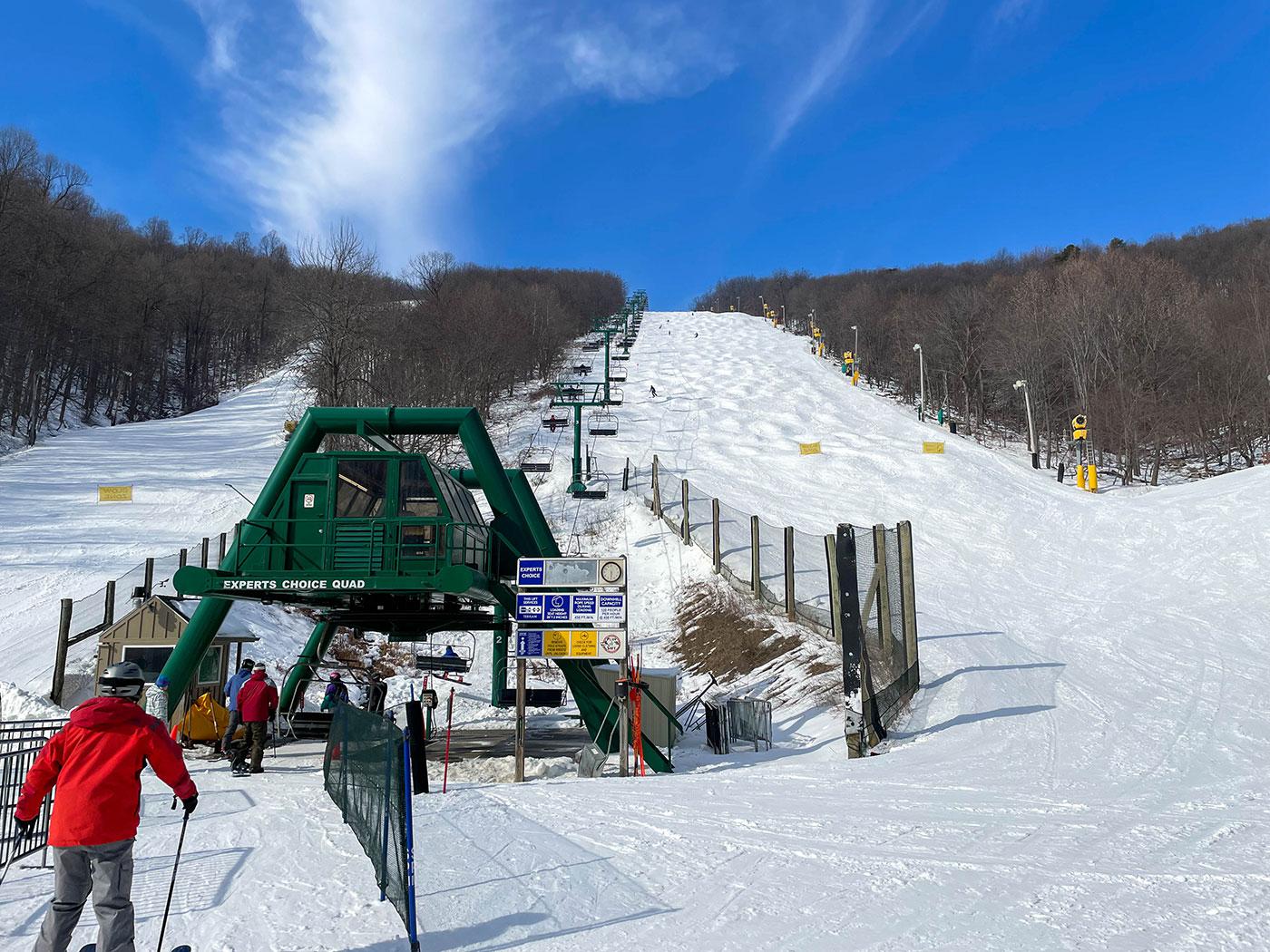 On most ski days, there’s a moment that brings a smile to your face, and for me that was watching a father teach his very young son to ski. From my vantage point on the slow-moving EZ Rider Quad, I was able to see the father shout words of encouragement to his tentative son, who couldn’t have been more than a few years old.

The son crashed on a turn, which could have been the catalyst to a full-out breakdown, but the father immediately yelled “what are you doing now, hugging the mountain?” and the son spontaneously erupted in unconstrained laughter.

You have a good teacher, little guy.

A few observations from my visit: the free ski check at Whitetail appears to be no more. This might be a victim of the pandemic and worker shortages; I hope it returns in future years as it was a real convenience. 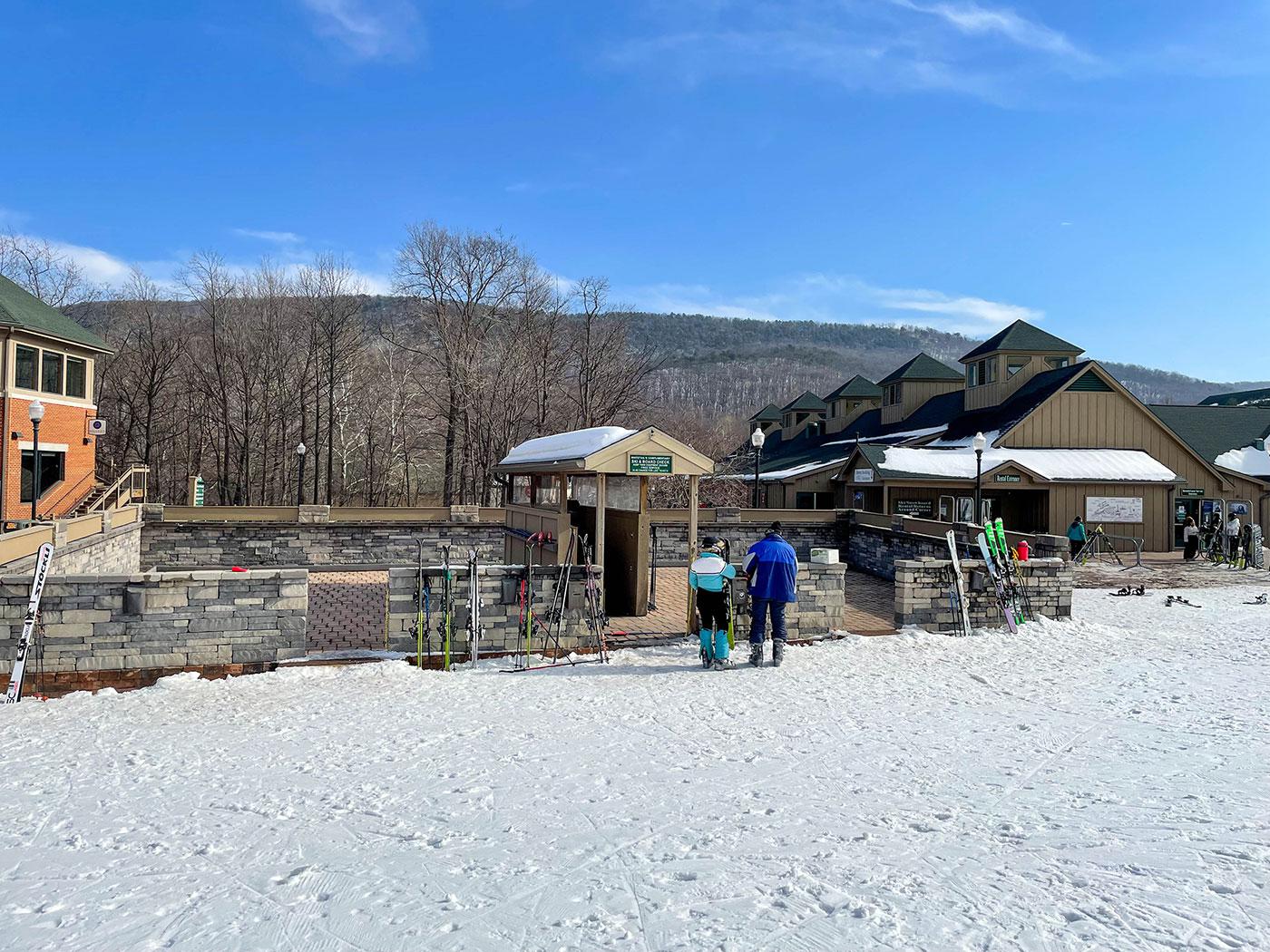 The free ski check is no more. Photo by M. Scott Smith.

While there are no mask restrictions outdoors at this time, interior areas at Whitetail require face coverings. Proof of vaccination is required to dine at indoor restaurants. Vail Resorts is also recommending that guests make reservations for indoor dining at their on-mountain restaurants.

Note, also, that Whitetail has curtailed its hours once again this winter season. For decades, the former Snow Time properties were open seven days a week from morning until 10 p.m. A quick nighttime visit to the slopes after a day of work was a popular excursion for many Mid-Atlantic skiers, including me. Whitetail is now open 9-5 on Mondays through Wednesdays and 9-9 on Thursdays through Sundays. 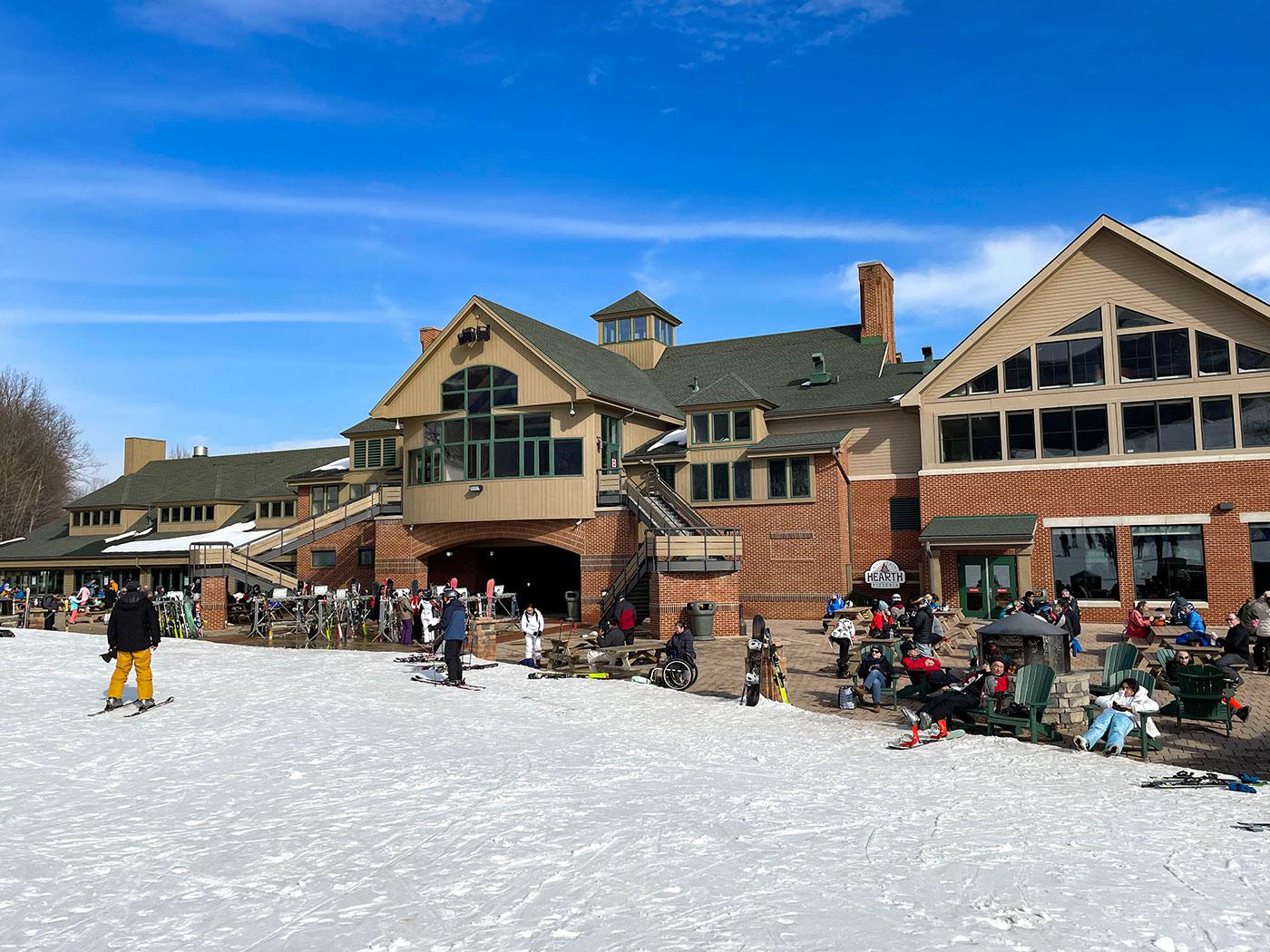 The base lodge at Whitetail. Face coverings are required inside. Photo by M. Scott Smith.

In addition, Vail Resorts is not offering the variety of lift ticket options that were once a staple of these local resorts, perhaps in a move to push more people towards purchasing an Epic Pass or simplifying policies across their portfolio of resorts. While Whitetail used to offer Twilight tickets, 4-hour tickets, 8-hour tickets, Extended day tickets, and more — to say nothing of programs like the Advantage Card — your ticket options now include a 1 Day Ticket. And that’s it. As Henry Ford once said, you can have your car painted in any color you want as long as it’s black.

Whitetail was once the newest ski resort in the nation, but parts of the resort are now starting to show their age. I noticed that the ride on the Whitetail Express is now very bumpy over the last couple towers leading into the mountaintop station — like headache-inducing bumpy. I’m not sure if some of the sheave wheels need replacing, but I don’t remember it being that rough of a ride before.

Finally, I’ll conclude with one tip. Places like Whitetail have been particularly crowded during weekends this winter. There are many reasons for this: a late start to the season, a surge in sales of Epic Passes, a shift for many towards outdoor activities, worker shortages, and simply the compressed number of good weekends in the Mid-Atlantic ski season. Readers are reporting long lines to enter the resort, park, pick up tickets, pick up rentals, and ride a lift on weekends. If that doesn’t sound like fun, and you have any type of schedule flexibility (or a generous definition of a “sick day”), by all means visit Whitetail midweek. The juxtaposition is stark. Often, I had an entire trail to myself. Everybody at the resort today was enjoying themselves and there wasn’t a line to be seen anywhere. 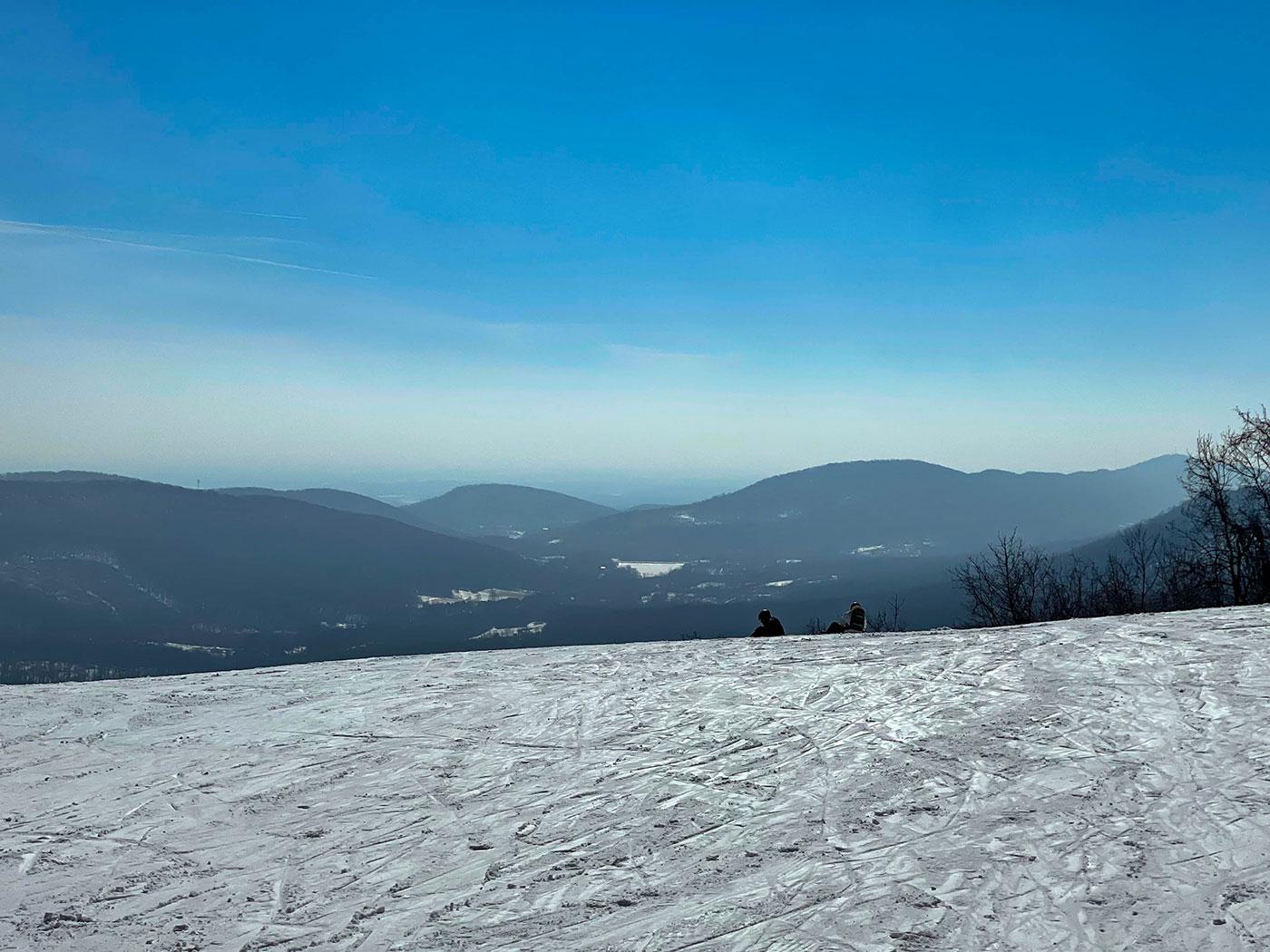 The top of Two Top Mountain at Whitetail. Photo by M. Scott Smith.

As I left Whitetail, I was happy to have enjoyed a beautiful, uncrowded day. I was happy that I remembered how to ski. I was also happy to see Buddy Hauk’s cowboy hat still positioned to the right as you exit the resort. For years Buddy served as Supervisor of the Mountain Hosts program, greeting skiers as they arrived at Whitetail and helping answer questions. Buddy passed away in 2012, but he established a culture of customer service at Whitetail. While Whitetail has undergone a lot of changes, it was nice to see Buddy’s hat still sitting there. 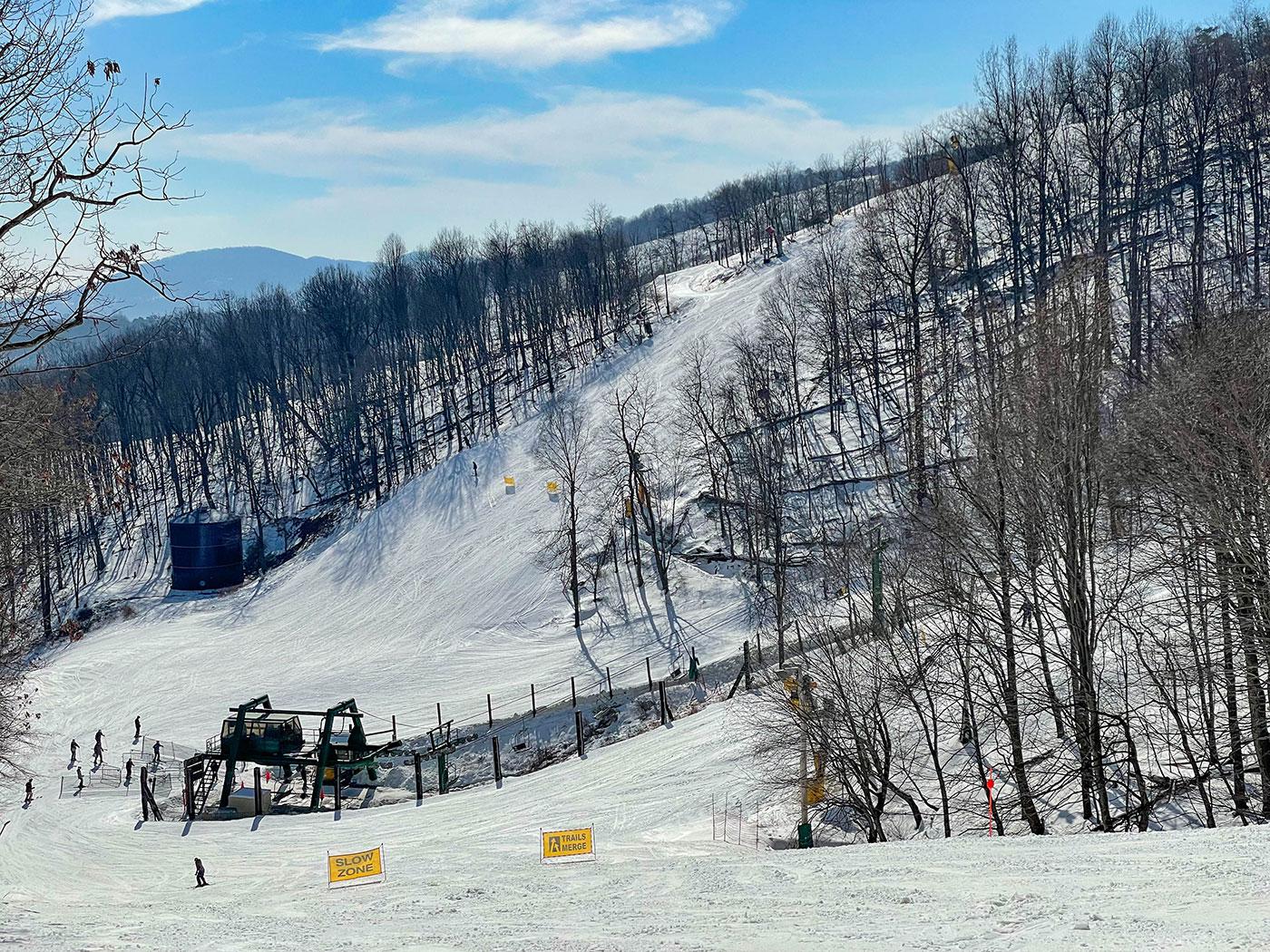 Where the experts hang out. Photo by M. Scott Smith.

oldensign - DCSki Columnist
February 2, 2022
Member since 02/27/2007 🔗
478 posts
Nice Read. As a Whitetail "homie" (I learned to ski there) who also has not been there in a while, it is good to see the old girl looking good. I was a bit worried with all the postings about crowds. But Whitetail mid week in the right conditions has always been awesome.

mdr227
February 3, 2022
Member since 01/11/2016 🔗
168 posts
Definitely a great place to visit during the week (when major school systems are not off) and can get a day's worth of runs in within a few hours with no lift line waits.   Do miss the cafeteria not being open, but understandable with the pandemic and worker shortages.   Really wish Vail would do something like the 4 hour ticket for those that don't have the Epic pass.   It's unfortunate it's such a zoo on the weekends (as are most local places) when so many are only able to ski as it can really ruin the experience for them.

Great article. It was the go-to place with my 3 daughters.  We all had the advantage card and would ski for a four hour flex.  It was the perfect amount of skiing.

None of us have been back since the four hour flex went away.