I purchased an Epic Pass last spring hoping that COVID would be a distant memory by ski season. I was woefully incorrect in my assumptions. Hoping to use up my remaining vacation days in December, I booked a trip to Beaver Creek but cancelled last minute as cases spiked and snow conditions underwhelmed. By late February, I felt comfortable enough with the COVID situation as well as snow conditions to book a trip to Sun Valley in Ketchum, Idaho. I chose Sun Valley because of its low crowds, ample outdoor lodge seating, and lack of gondolas — factors that would hopefully lower my exposure to the illness. 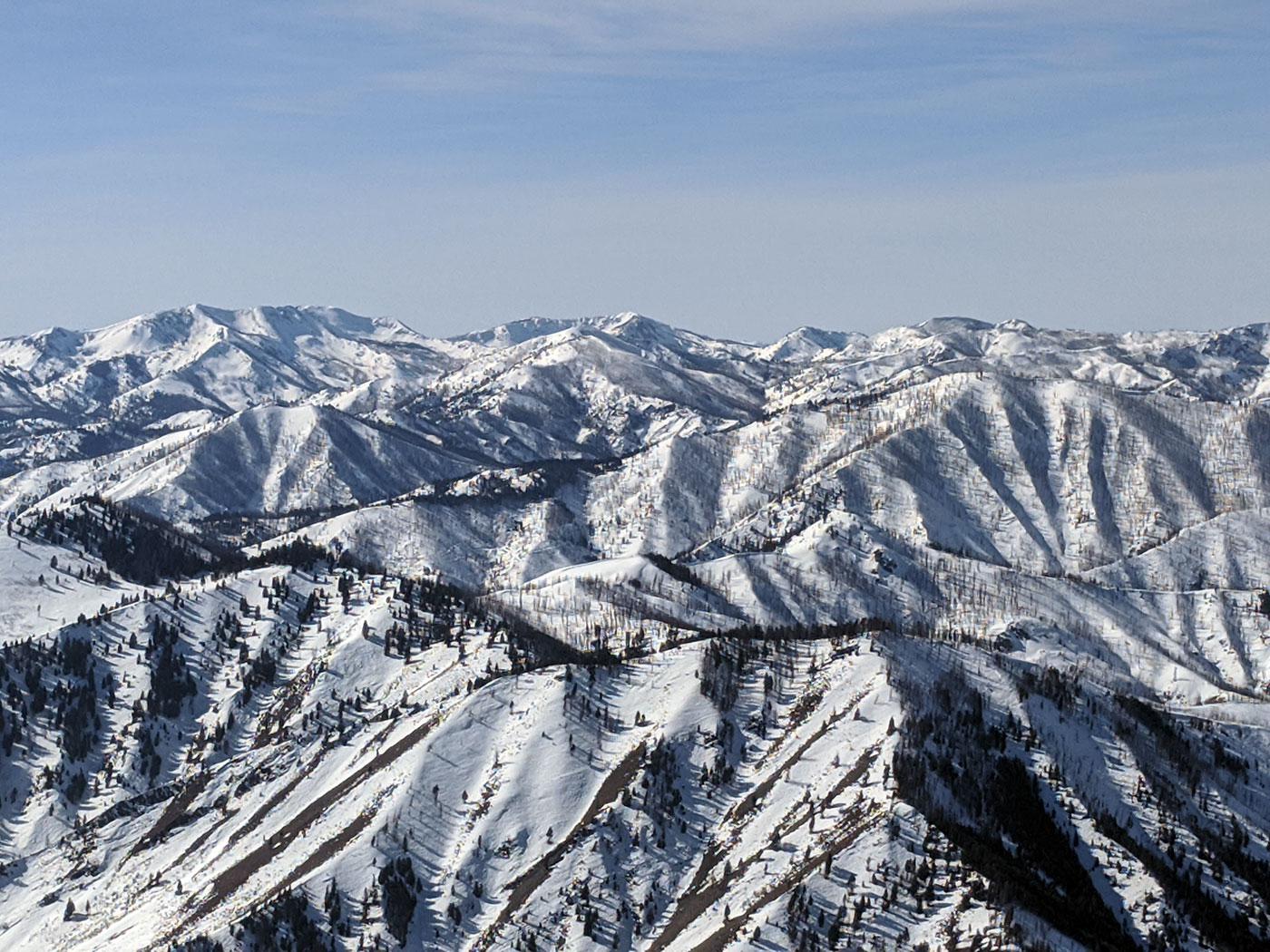 Sun Valley’s lack of crowds has to do with its location far from major metropolitan areas. It’s over ten hours’ drive from Seattle, the closest West Coast city, and two flights from anywhere on the East Coast. My wife and I chose to fly United through Denver to SUN airport in Hailey, Idaho. We flew a 767 to Denver with lots of space and a 60% full E-175 to Hailey, which is probably the most pleasant little airport I have ever experienced. It features one waiting room and is just 12 miles from Ketchum via a flat, wide road. The airport offers direct service to Denver, Chicago, Salt Lake City, Los Angeles, San Francisco, and Seattle. Recent technological improvements to the airport have improved service reliability in inclement, mountain weather.

We left DC at 8:30 in the morning and arrived in Hailey at 2:00. After provisioning at Albertson’s, we arrived at a lovely Airbnb less than a half mile from the Warm Springs base area. Bald Mountain, or “Baldy” as locals call it, is the main ski mountain at Sun Valley, and has two base areas. Warm Springs is best for confident intermediates and advanced skiers because there is no easy way down from the summit. It also has limited paid and permit parking. Most people access it either by the free shuttle or by walking. We walked. River Run is better suited for lower level intermediates. There are green options down from both the Roundhouse and Lookout top stations. It also features a large, free day lot, making driving there easier.

When we arrived at Sun Valley, Baldy had over 100 inches of snow at the top and more than 80 at the bases. We had just one cloudy day out of the seven we skied. The rest were bluebirds with temperatures ranging from 20 to 44 degrees Fahrenheit — ideal weather in my book for blasting down groomers and enjoying dining al fresco at the various lodges. The high desert climate kept snow conditions decent at the bases and pretty darn good higher up for the entire visit.

Baldy is all about big vertical and fall line skiing. On typical days, we racked up over 40,000 feet of vertical, skiing mainly groomed blues and blacks. We shied away from bumps to save energy and ski longer days. The Challenger lift on the Warm Springs side boasts 3,140 feet of vertical — the most of any chair in North America. We loved this chair and all the trails it serviced but particularly Limelight — a single black that rips right down the fall line with 19 degree grades in points. After 3 p.m., this monster is yours to carve up however you wish. Never in my 40+ years of skiing have I experienced an epic, 3,000 foot vertical, big mountain descent without seeing a person. At Sun Valley, if you play your cards right and hang in there for the last chair, such a gift can be yours for the taking. To quote the B-52’s song, “You’re living your own Private Idaho.” 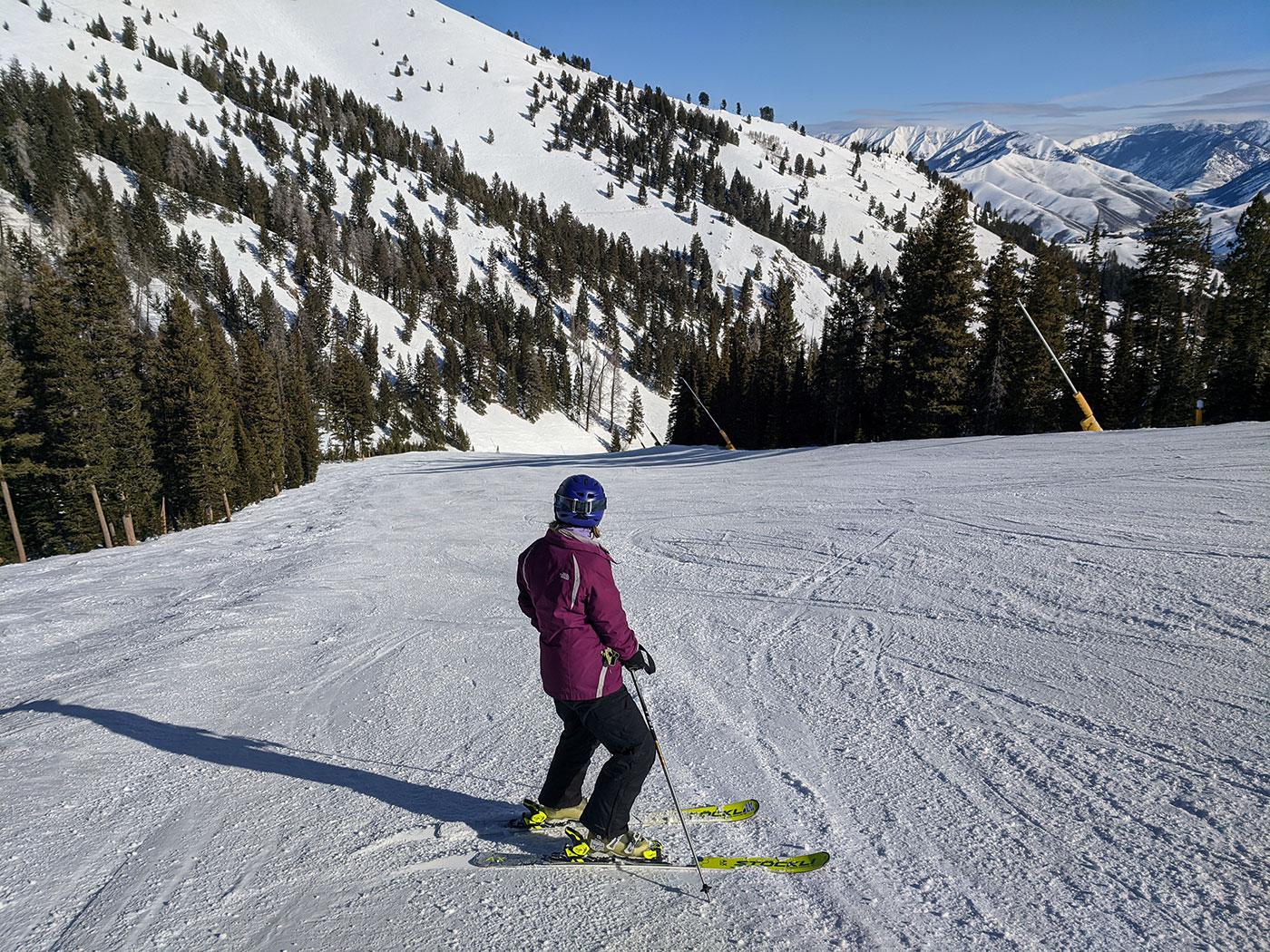 Baldy has a variety of distinct skiing areas: Warm Springs, River Run, the Baldy bowls, Sunrise Bowl, Frenchman’s, and Seattle Ridge. We sampled every area except the double black Sunrise Bowl. Seattle Ridge has some of the easiest skiing on the upper mountain and has a popular day lodge for lunch with endless views of Idaho’s picturesque peaks. Hence, it gets crowded from 11 a.m. to 1 p.m. It also connects to the Mayday lift, one of only two fixed grips left on Baldy.

Mayday is your ticket to the Baldy bowls. My wife loved Sigi’s and I gravitated to Kaitlyn’s, which was groomed when we visited (a rare event according to locals). The Stökli Laser AX demos that I rented loved this trail. Known amongst locals as the Baldy ski, expensive Laser AX’s dominate the mountain, which caters to some of the wealthiest people in the country. $30+ million dollar houses abound and each year Allen and Company hosts a summit here regularly attended by Bill Gates, Oprah Winfrey, Warren Buffett, Rupert Murdoch, Michael Bloomberg, Mark Zuckerberg and many others. A season pass costs $1,859 (one of the most expensive in the world), and day tickets average $149. 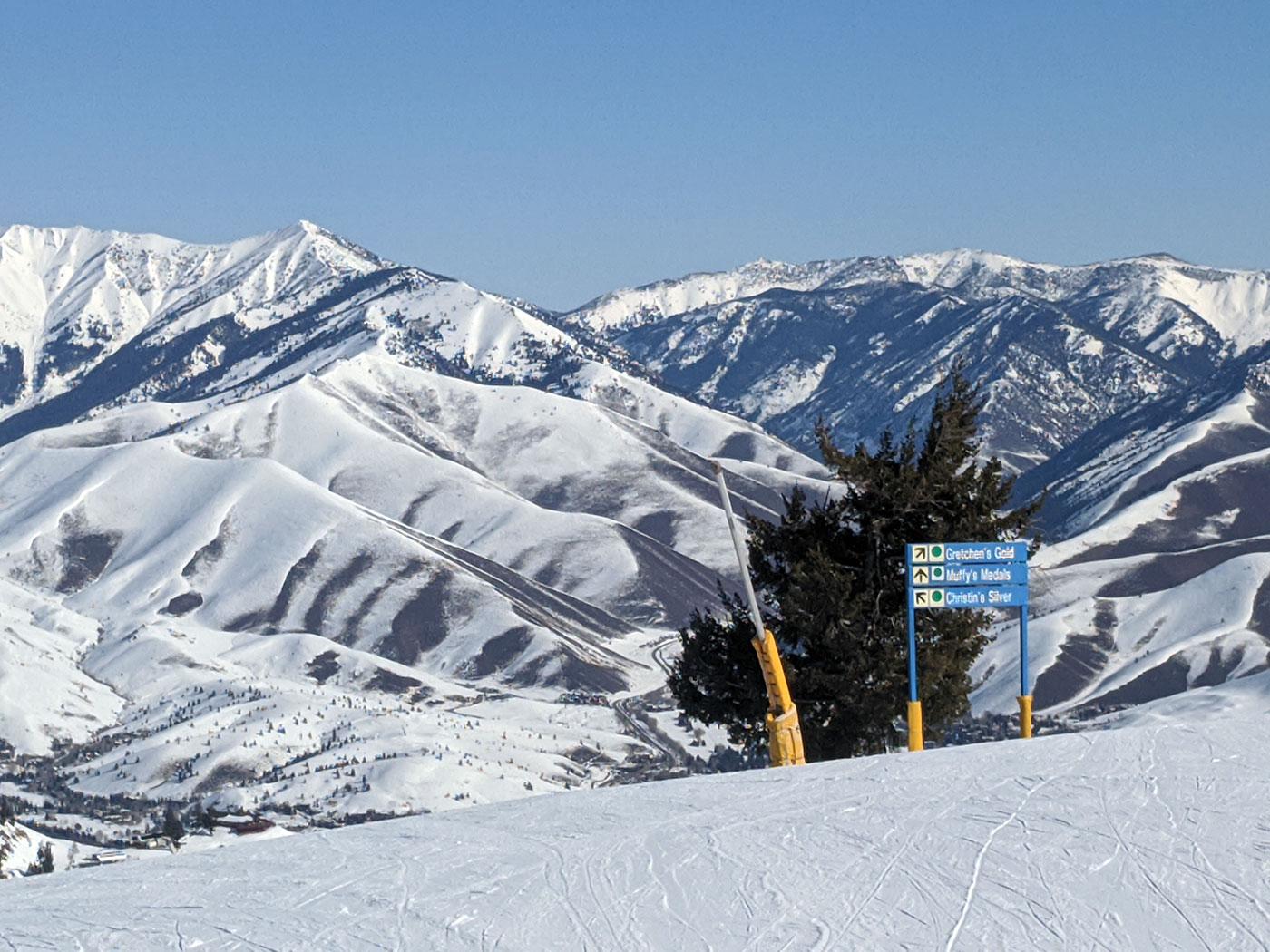 My Epic Pass gave me 7 free days at this resort, and I skied every single one of them! Surprisingly, Airbnb lodging was a decent value at a little over $200 a night for a small, two bedroom with sweet views of Baldy. I could drink coffee in the morning and watch the sun rising over the mountain, and after a long day on the slopes, enjoy a Sawtooth IPA while viewing elk grazing on the ridge behind the unit.

There are two criticisms one occasionally hears often about Sun Valley. First, it does not get the snow that other resorts in Idaho and Utah receive. Compared to Brundage in McCall, Idaho, or Snowbird in Utah, this is probably a fair criticism, but the resort still has had some decent snow in recent years. According to On The Snow, it received 198 inches in 2018-19, and 359 inches in 2016-17. When I skied there in early March, it had received a respectable 115 inches. It also has snowmaking on nearly all major trails and cold, dry nights most of the season ensure almost perfect conditions for blowing snow.

Another concern is a lack of variety. I found this one to be unfounded. Baldy has a lot of terrain variety if you know where to find it. From bowl skiing to bumps to trees, it delivers the goods. For bumps, Upper Picabo Street and Olympic offered tremendous, steep mogul fields. Trees can be found in side country and at the new Sunrise Bowl. We found some interesting natural half pipes on Upper River Run and the Cold Springs Cut Off. Once you master the catwalks, you can ski some interesting combinations: 1,000 vertical of steep bumps, followed by a benign green run for another 1,000, and then a steep blue groomer for the rest of the run. 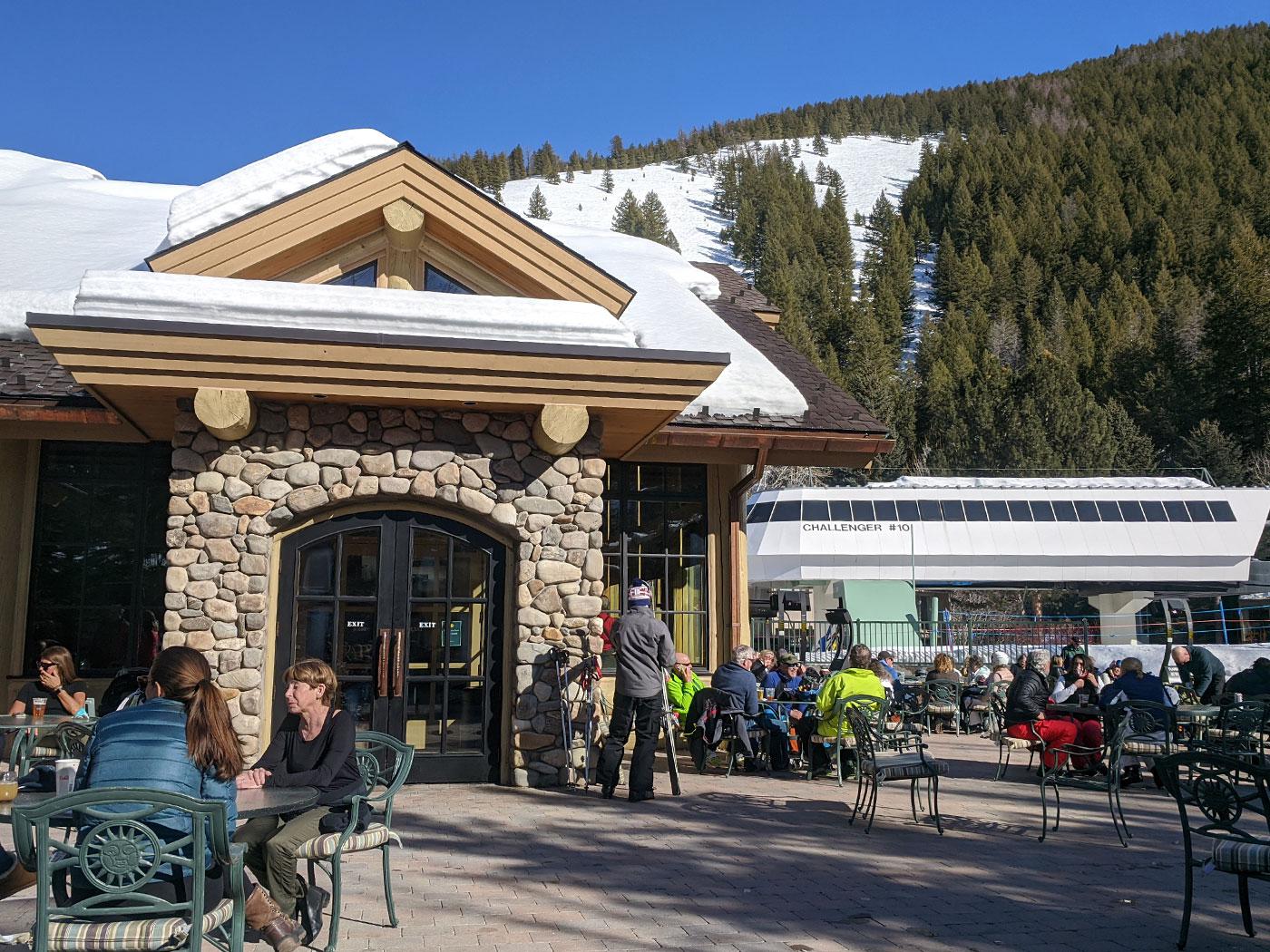 Remarkably, I even found some relatively low angle green circle terrain on Lower Broadway, Lower River Run, and Lower Warm Springs. The trail rating system at Sun Valley can be frustrating to flatlanders like me. Many greens would be blue at other western resorts and blues, blacks. With that said, one can find suitable beginner and lower intermediate terrain by asking a mountain host for information. Sun Valley also has a dedicated beginner area called Dollar Mountain on the other side of town.

Would I got back? In a minute when the snow conditions are decent. It’s a five star resort with beautiful lodges, spectacular scenery and terrain, and huge vertical. More significantly, it lacks the crowds one often encounters at similar, more accessible destinations. For me, I love bluebird skiing and Sun Valley, true to its name, delivered sun drenched skiing. As long as it stays on the Epic Pass, I will keep it on my radar screen for future trips. 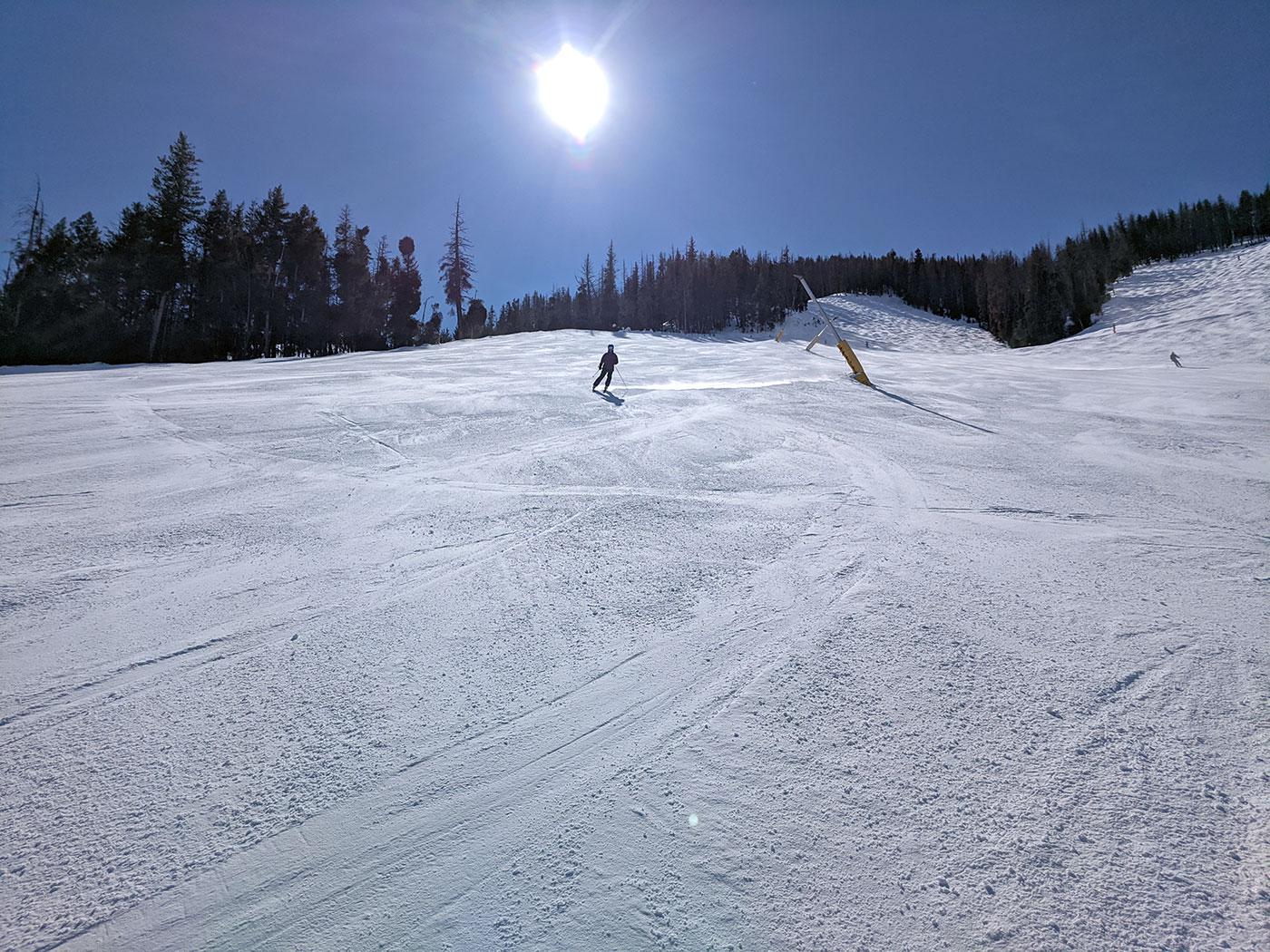 JimK - DCSki Columnist
March 31, 2021
Member since 01/14/2004 🔗
2,852 posts
Looks like a great visit John.  That is one mountain I have not made it to yet!  The Sawtooths really have a distinctive look.  Your own private Idaho sounds mighty nice during a season when lift lines have often been long and everyone is interested in avoiding big crowds.

johnfmh - DCSki Columnist
April 1, 2021
Member since 07/18/2001 🔗
1,968 posts
Yep. Idaho is a remote corner of the ski universe. As you know, there are other great places to explore as well, including Soldier Mountain (not far from Ketchum), Bogus Basin near Boise, Tamarack and Brundage near the resort town of McCall (both have expansion plans on the books), and Schweitzer further north near Spokane and Coeur d’Alene. Only Sun Valley is Epic and that drove our decision to visit there. If we were seeking more of a powder experience, I think we would have chosen to visit Brundage and Tamarack. However, the Epic Pass conundrum and also road construction work between Boise and McCall forced our hand. For a back country Sawtooth experience or just a good hiking place, I recommend the Redfish Lake Lodge near Stanley, Idaho. Hard to get to but amazing scenary.

JimK - DCSki Columnist
April 1, 2021
Member since 01/14/2004 🔗
2,852 posts
John, is it true that many of those big, long black and blue groomers have top to bottom snowmaking?  And therefore, even in lean snow times Sun Valley is pretty snow-sure?

Jim, when I visited Sun Valley a few years back, they were experiencing one of the leanest snow years ever. I described what it was like In this trip report. At the time they covered around 545 acres with snowmaking (and they sure needed it that year).

They have installed even more snowmaking since that article was written—25 new guns on Lower Broadway.

Here is an article on snowmaking at SV:

The cold, dry climate, especially at night, makes snowmaking at Sun Valley a much easier proposition than the situation we have here locally. When natural snow does occur, it holds for a long time.  And yes, it’s top to bottom snowmaking throughout the resort.