After many years of talking about skiing in Canada, I finally made it up to Alberta to check out the snow in the Canadian Rockies. My friend Jan and I ventured up to Canmore, CA near Banff. She had been taking ski trips up there for over 20 years!

Alberta features over a dozen ski resorts. The biggest of these resorts are Banff Sunshine, Mount Norquay and Lake Louise. Fortunately all three of these resorts can be visited on one multi-day lift ticket.

Jan and I started at Banff Sunshine on a gray Friday afternoon. We never saw the sun shine at Sunshine. The top of the mountain was in the clouds creating an eerie effect — the mist wafted across the terrain like ghosts. 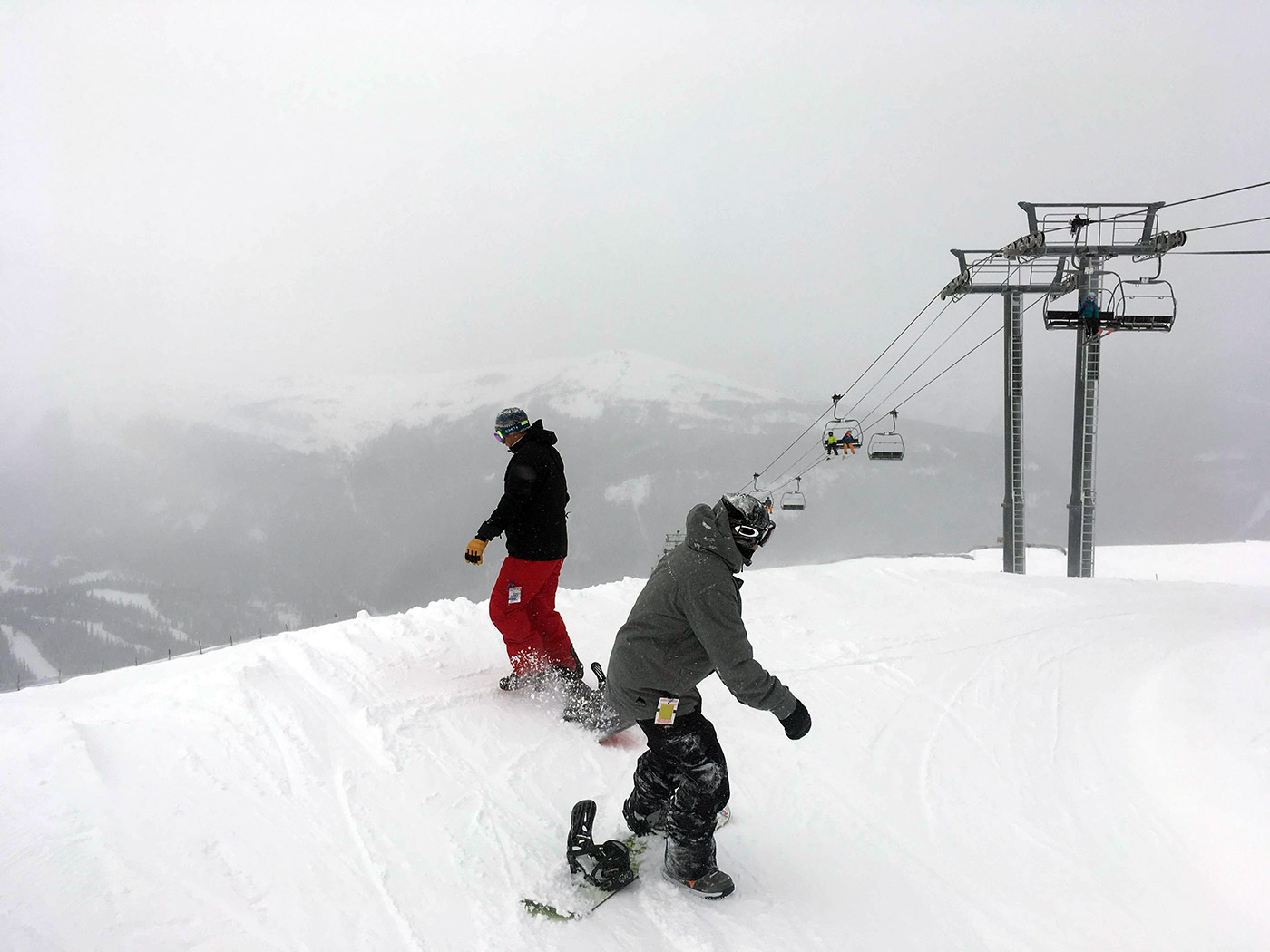 Snowboarders go for the edge of the mountain at Sunshine. Photo by Matthew Graham.

Sunshine has 137 trails, 12 lifts and a vertical drop of 3,500 feet. A gondola ride is needed to get from the base/parking area to the main Village and the other lifts. Jan and I warmed up on the Intermediate World Cup Downhill Run. The trail started with a medium grade and led to a shallow traverse before becoming steeper and cutting down through a section of forest. It seemed to go on forever. We ran it again and connected another blue slope (Highway One) that led to the Great Divide Express Quad, which took us to the top of Lookout Peak at 8,954 feet. The fog was even thicker here. We again skied down the World Cup Trail at this new higher starting point. It did go on forever!

Back at the top of the mountain, we were able to connect the blue runs to several short advanced runs — half of them groomed and the other half bumped up. Off in the distance we could see the Tee Pee Town Luxury Express Lift. It was a covered heated lift — the only one in Canada. It took us a while to figure out how to get to it. The lift services all levels of terrain. A clear yellow bubble comes down over the chairs like the canopy of a fighter jet. From a distance, the lift looks like a series of bumble bees flying in a line up the mountain. Jan and I slipped onto the lift and pulled down the cover. Anyone who has heated seats in their car knows how wonderful they are. A heated seat on a chairlift is a billion times nicer. And the bubble sheltered us from the wind and retained the heat.

We took a few rides in Luxury and then grabbed some lunch at the Sunshine Burger Company in the village lodge. It served traditional burgers, salmon burgers and veggie burgers.

After lunch, we took the Standish Express Quad up to the summit of Mount Standish. The peak had a wide variety of intermediate and advanced terrain. Two shorter lifts serviced adjacent sides of the mountain with access to shorter, though still fairly long, trails. 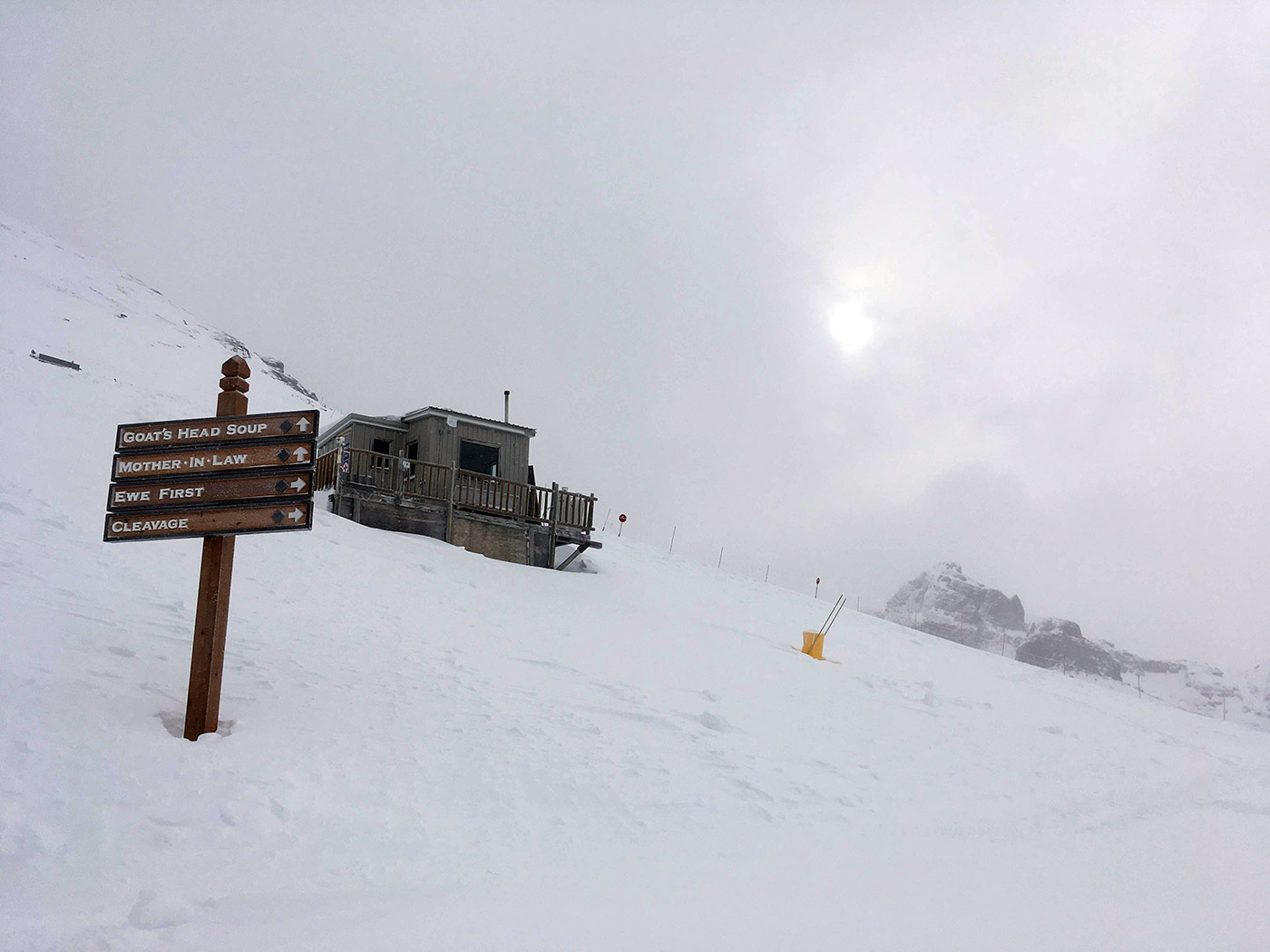 In the clouds at Sunshine. Photo by Matthew Graham.

We continued down the mountain to the Goat’s Eye Express Quad for Goat’s Eye Mountain. The lift may also be accessed by disembarking the main gondola at mid-station. The runs here were the best by far. A slew of double blacks appeared so steep and inviting that we passed on them. Even the single blacks were a serious undertaking. The main fun was the very, very long Sunshine Coast blue trail. It made a giant “S” across the face of the mountain. A plethora of intermediate and expert runs cut down through the top and bottom halves of the “S”. It provided almost endless possibilities by connecting the various sections.

I could have skied ‘til sunset at Sunshine. Sadly, they closed the lifts at 4 p.m. None-the-less, Jan and I were able to get one final run in by skiing to the bottom of the mountain following the path of the gondola.

The following day, Saturday, we tried out Mount Norquay. It’s the smallest of the Big 3 and considered the “locals” mountain. As such, I guessed that it would be the least crowded. And I guessed right!

The mountain has three faces serviced by 6 lifts. There are 60 trails. The face closest to the lodge is all Experts Only Terrain. There were nothing but iced up moguls. We decided to skip that. The next face has mostly beginner terrain with a few blue runs. The runs aren’t as long as at Sunshine. But the sun was out with a bold, blue sky. And the runs were fun. 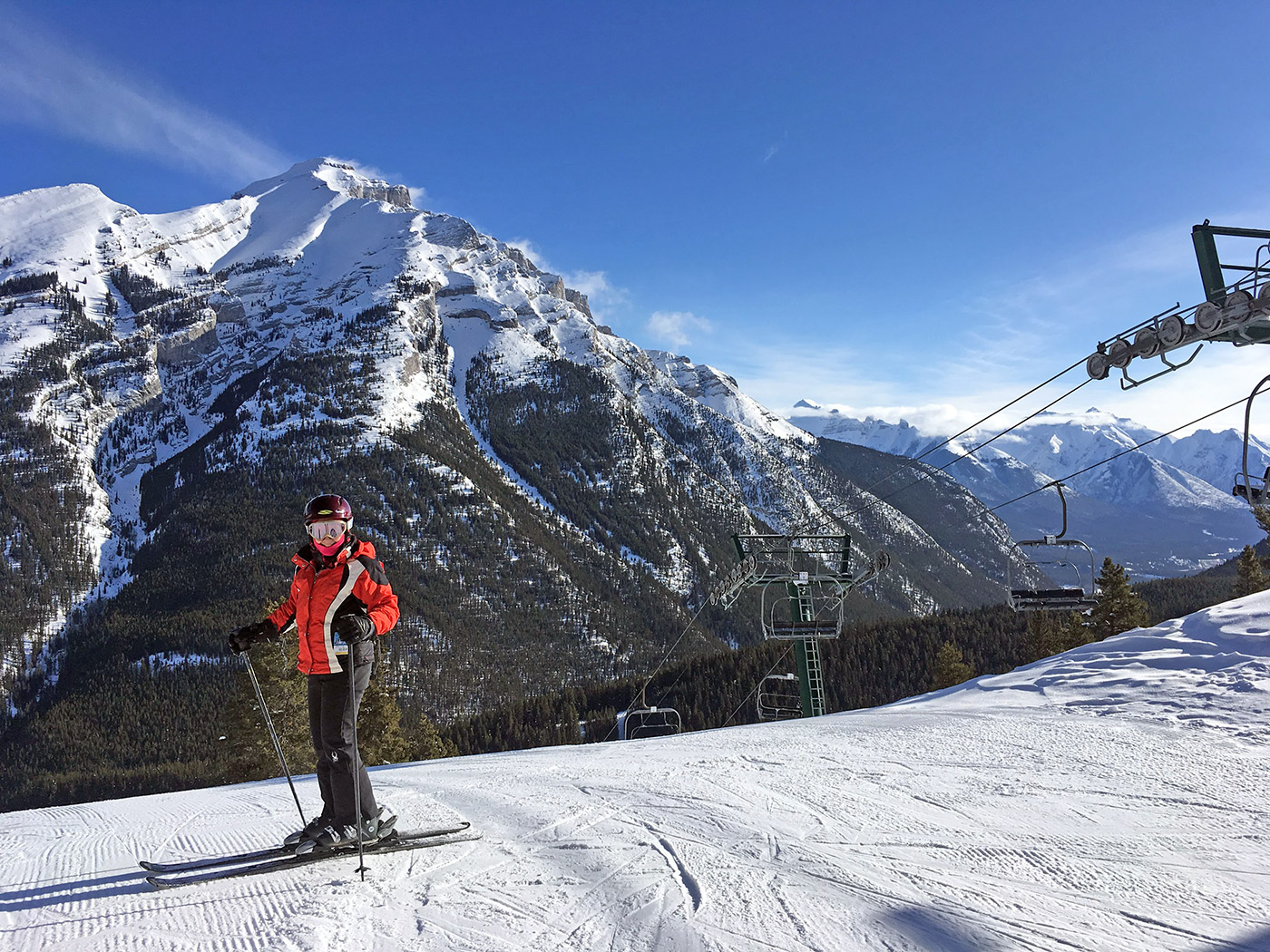 However, Jan and I got bored on the blue runs and moved over to the final section of the mountain, which had a mix of blues and single black slopes. The slopes here were longer and reminded me of the trails in New England. The snow was a mix of corduroy and hard pack. As my skis bit into the packed snow they made that scraping sound — like nails on a chalkboard. But this is what I’m mostly familiar with and I was having a great time zooming down the runs at full speed. This area of Mount Norquay is the only part serviced by a high speed quad. Jan and I cranked out the runs!

We stopped at noon for a quick meal at the cafeteria. The lodge was packed full of families with kids. However, out on the slopes it was empty. Don’t know why. But it worked for me. Jan and I returned to the slopes and enjoyed another dozen runs by 2 p.m. The snow was becoming harder — so we called it an early day.

Jan and I saved the best for last — Lake Louise. The resort is by far the largest. Jan has raved about it for years. Lake Louise has a whopping 156 named trails and a wide variety of terrain in their backcountry bowls. There was a long line for the gondola. We opted, instead, for the high speed quad Glacier Express lift and then zoomed down a blue run. 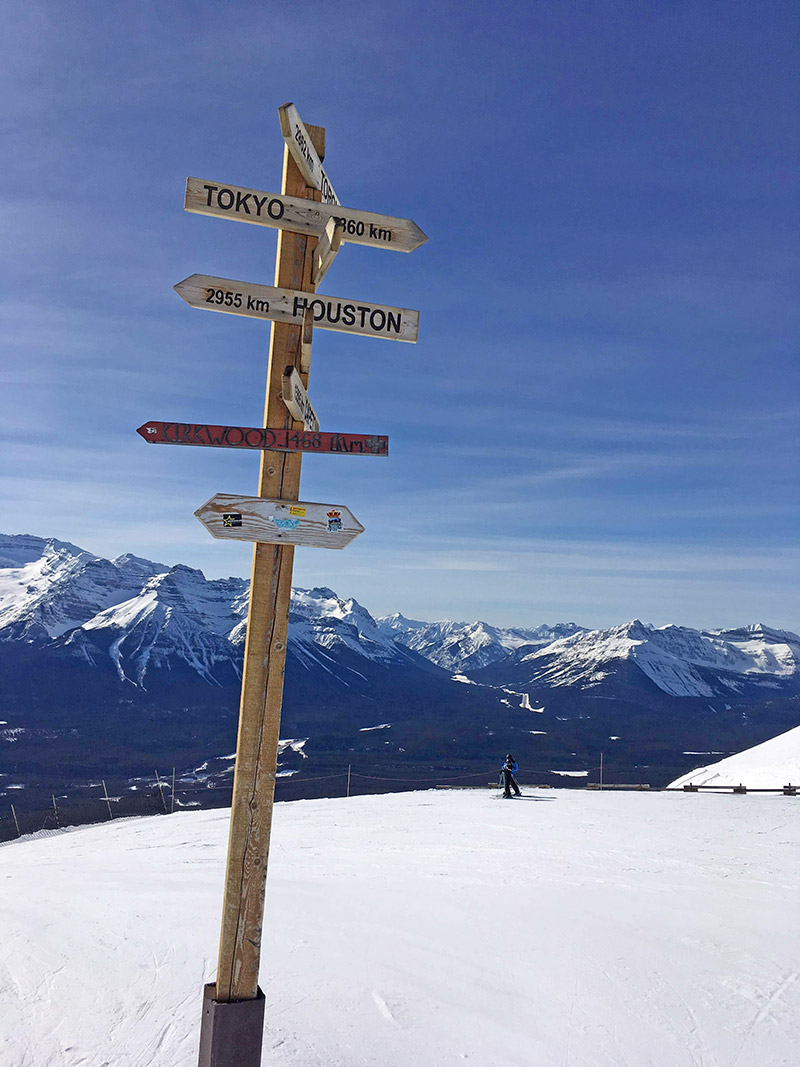 Top of the World at Lake Louise. Photo by Matthew Graham.

The line for the gondola had gotten even longer. We re-boarded the quad and then took a short run over to the Top of the World Express 6-Pack Lift. It was much colder than the past couple days of skiing. However, the sun was shining and I knew it would warm up by mid-day. From the top of this lift we had access to a dozen intermediate and advanced runs. The snow was much softer than at Norquay. Linking turns was effortless, even on the steeper runs.

After exploring a half dozen of these trails, we continued onto a very long beginner trail that followed a ravine down to the back side of the mountain. We popped our skis off and headed to the bar at the Temple Lodge at the bottom of the trail. There’s nothing better than hot chocolate to warm you up on a cold day. OK. It was hot chocolate with Bailey’s Irish Cream. And, yes, that is better.

There are two lifts near the lodge — the Larch Express which led to a handful of long, wide blues and blacks… and Ptarmigan Quad, which serviced one intermediate run, one beginner trail and a handful of advanced chutes. We started with Larch. Maybe it was the hot chocolate. Or maybe there was less wind. But I was definitely a lot warmer as I swooshed down the trails.

Jan and I separated for a few runs and easily met back up at the bottom. We took Ptarmigan (not a high speed lift) and sat on the chair for what seemed like half the day. Jan and I skied a blue to a black and returned to the lodge for a quick bite. We decided to stay with Larch four a few more runs… and then return to the main face. Which, unfortunately, required riding the Ptarmgan lift again. 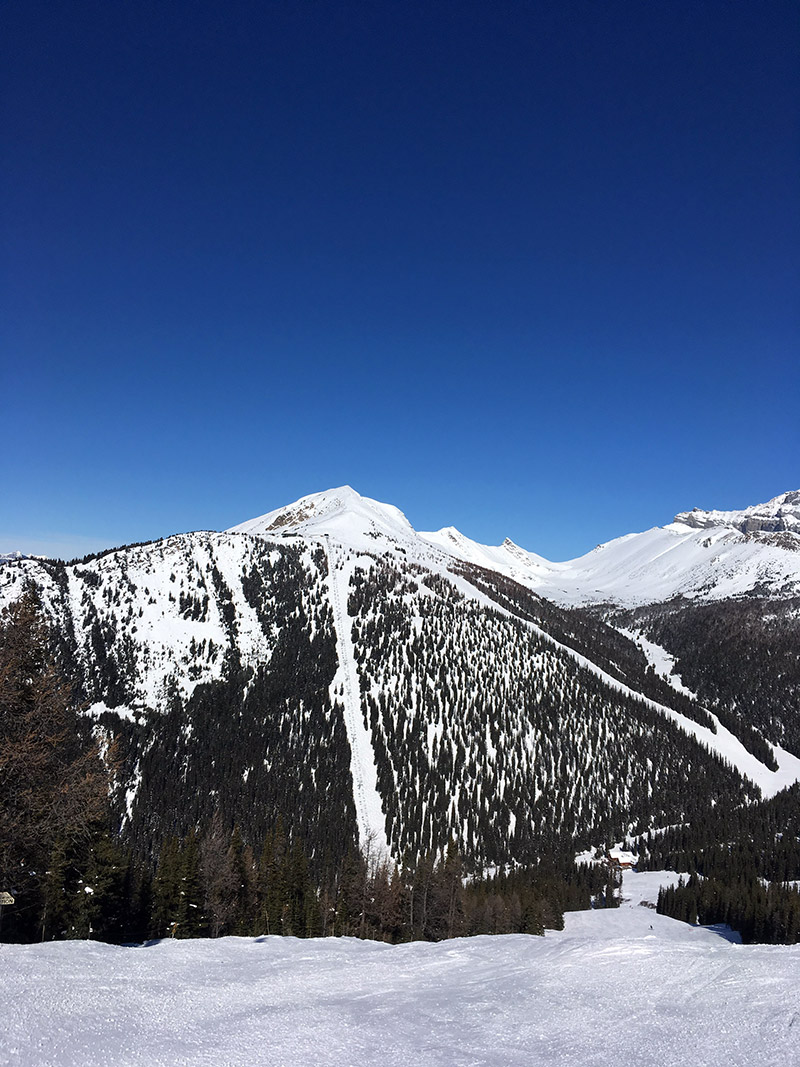 We skied all the way to the bottom of the mountain and boarded the gondola. Gondolas are nice. However, I really loved that heated enclosed lift at Sunshine, which didn’t require removing your skis. Two green runs, interconnected with a handful of expert slopes, fed down to a mix of beginner, intermediate and expert terrain. All of the lifts at Lake Louise have a green trail option at the top so that no one gets stuck on a trail he or she cannot handle.

Jan and I returned to the Glacier Express and then to the Top of the World so that I could ski down the Men’s Downhill and Ladies’ Downhill trails. Jan decided to stay on the blues for the rest of the afternoon. Both black diamond slopes were not nearly as steep as I had imagined. But I was the only one on each. And that’s such a magical experience to have a trail all to oneself. With a half hour until the slopes closed, Jan called it quits for the day and I knocked out another trip down each of the downhill runs.

I could see why Jan loved this mountain — and all of the resorts near Banff. It’s Big fun at the Big 3!

Enjoyed the report. I have dreamed of skiing these resorts since I started watching the FIS World Cup races at Lake Louise on cable.

BTW, Okemo has a very popular heated lift and they are all over the Alps in Europe. Big Sky also put one in recently. I suspect these lifts are pricey””hence the reluctance of most American and Canadian resorts to install them. Vermont and Eastern Canada would seem like a natural place to build them but other resorts have been slow to follow Okemo’s lead.