I’ve been writing for DCSki for over 20 years. During that time, I’ve racked up more than a few ski days at Mid-Atlantic areas, but there was one ski area I somehow had never visited: Liberty Mountain Resort.

That’s right. I had never been to Liberty Mountain Resort.

I had nothing against Liberty. But, Liberty and Whitetail were the same distance away, and on paper Whitetail seemed like a better value: higher vertical (935 feet vs. 620), better lifts (a high-speed quad vs. older fixed grips), and newer facilities. Given time constraints, I’m lucky to make it skiing 2 or 3 days each winter, so when it came time to point my car west for a day ski trip, Whitetail was usually the destination. 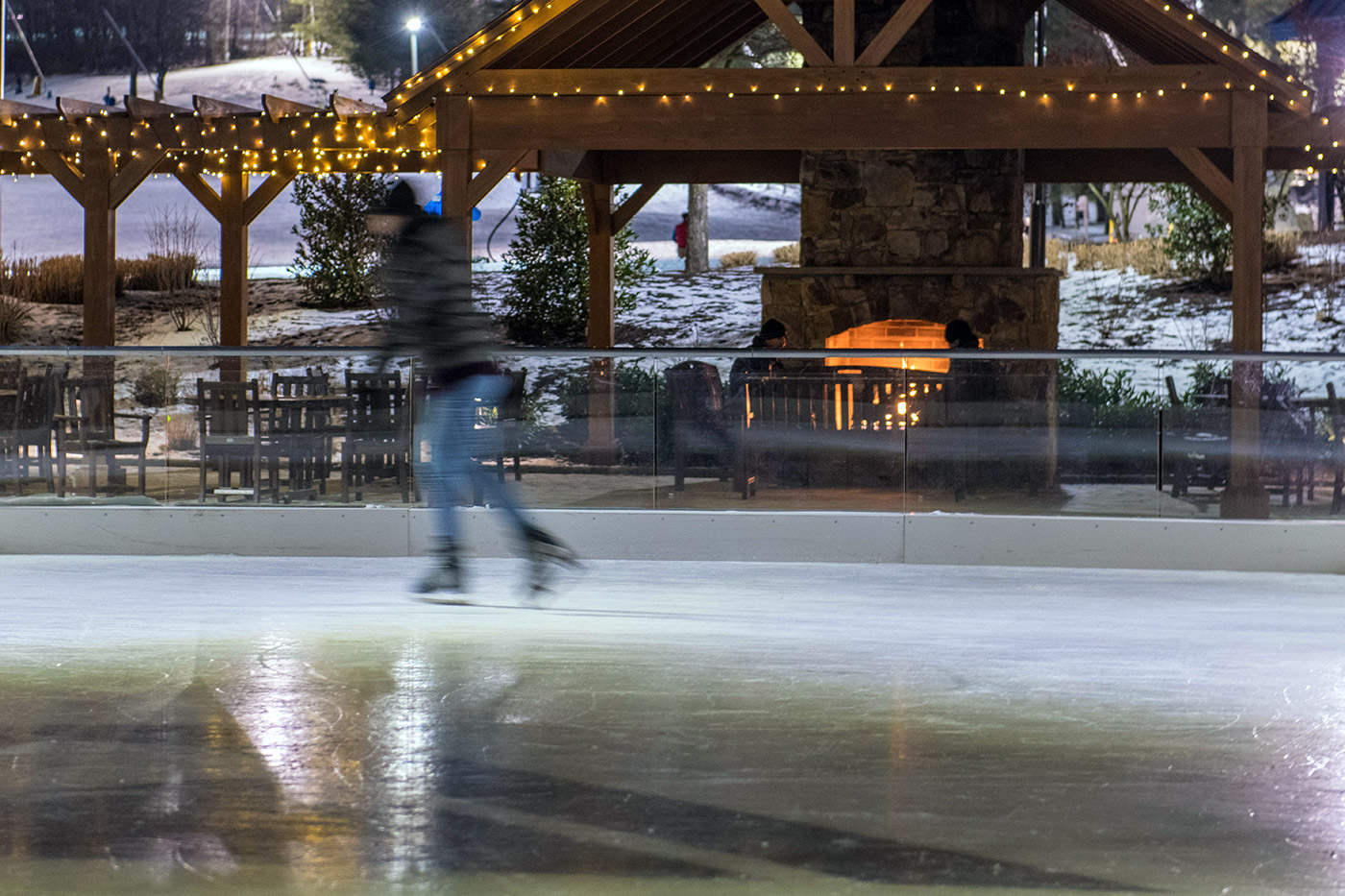 On the drive to Liberty, I occasionally caught glimpse of rolling hills of farmland. The sun had already set, but a carpet of white snow reflected light and presented a pastoral scene through the chilly night air. When I arrived at Liberty, the temperature was around 20 degrees — warmer than it had been earlier in the weekend, but still cold enough to leave the tips of toes and fingers burning with that on-the-way-to-frostbitten sensation.

I snagged a parking spot at the edge of the parking lot close to Liberty’s base facilities. After convincing my feet that, yes, they could indeed be squeezed into my vice-like ski boots — despite all evidence to the contrary — I tossed my skis over my shoulder and made the awkward hike to the base lodge and the edge of the slopes. 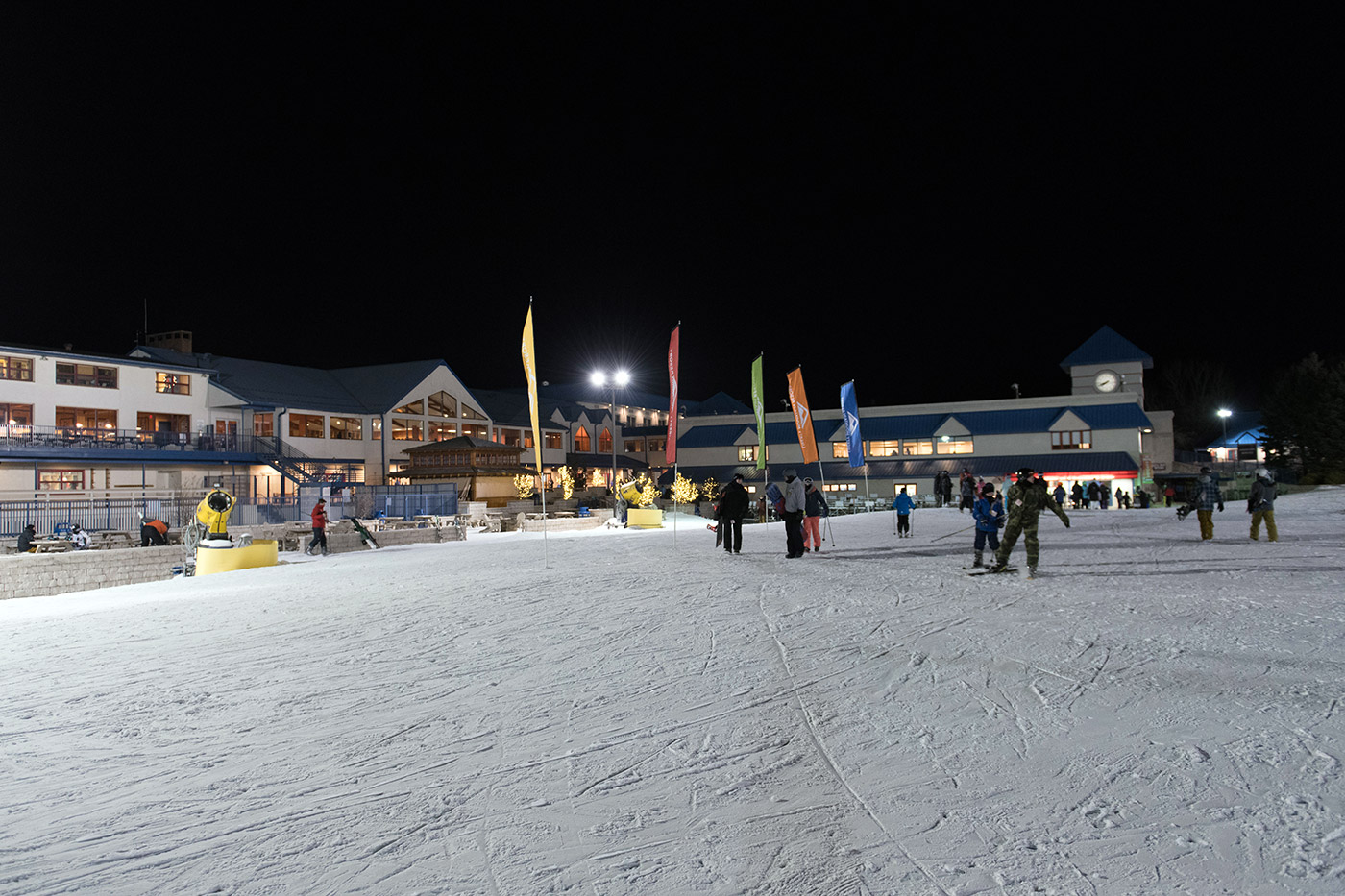 The base area at Liberty Mountain Resort. Photo by M. Scott Smith.

Liberty’s base facilities differ somewhat from Whitetail. While the design of Whitetail’s main lodge was inspired by Deer Valley, Utah, Liberty’s base facilities are more utilitarian. However, upgrades in recent years have turned Liberty’s base into a nice pedestrian-friendly area. Several guests enjoyed a small ice skating rink, and multiple dining options provided a range of options from counter service to sit-down. Unlike Whitetail, Liberty is not in dry country: guests can purchase alcohol there. Like Whitetail, Liberty offers complimentary ski check. And while Whitetail experimented with real estate for awhile, building and selling several types of housing near the slopes, Liberty has an on-site hotel located right at the base area. Many of the houses and condos near Whitetail can be rented directly through owners, but Whitetail does not have its own on-site hotel. 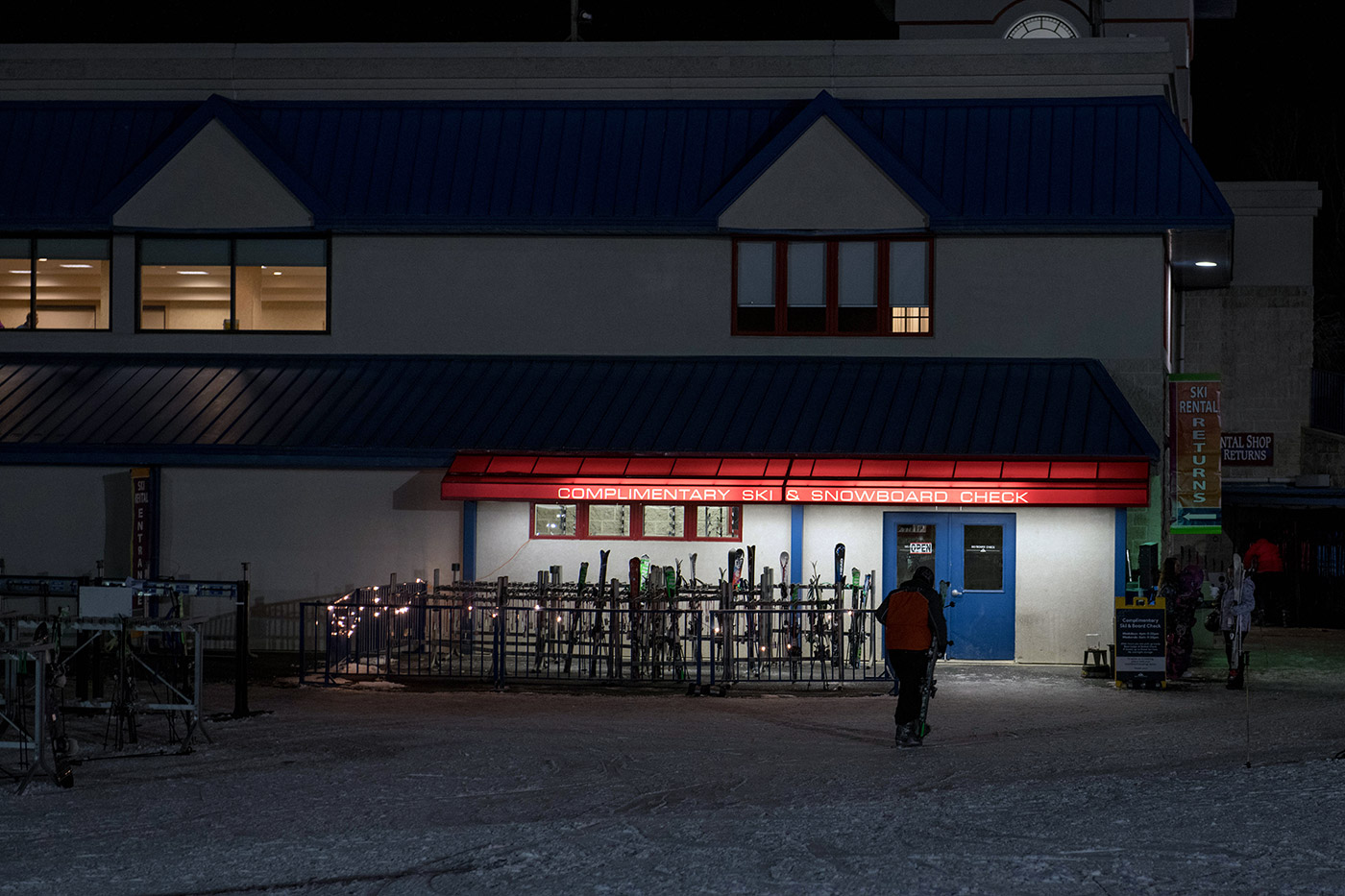 Base area amenities include a free ski and snowboard check. Photo by M. Scott Smith.

After popping on my skis, I began to taste test Liberty’s various slopes. Here, there was a distinct difference between Liberty and Whitetail. Almost all of Whitetail’s slopes are wide, but go straight down the mountain, more or less. In fact, at Whitetail, one could argue that beginner slope Ledgewood is really the only trail that realized it’s OK to turn a little while going down the mountain. Trails like Whitetail’s Fanciful, Snow Dancer, and Limelight essentially offer the same exact skiing experience and differ only in their names.

At Liberty, it felt like the slopes had let their hair down a little and were OK with zigging and zagging a bit. Frequent intersections between different trails provided a greater variety of options for getting from the top to bottom. To me, this felt more like western skiing, although at a much smaller scale. Perhaps I’ve grown too used to the plainness of Whitetail’s slopes. 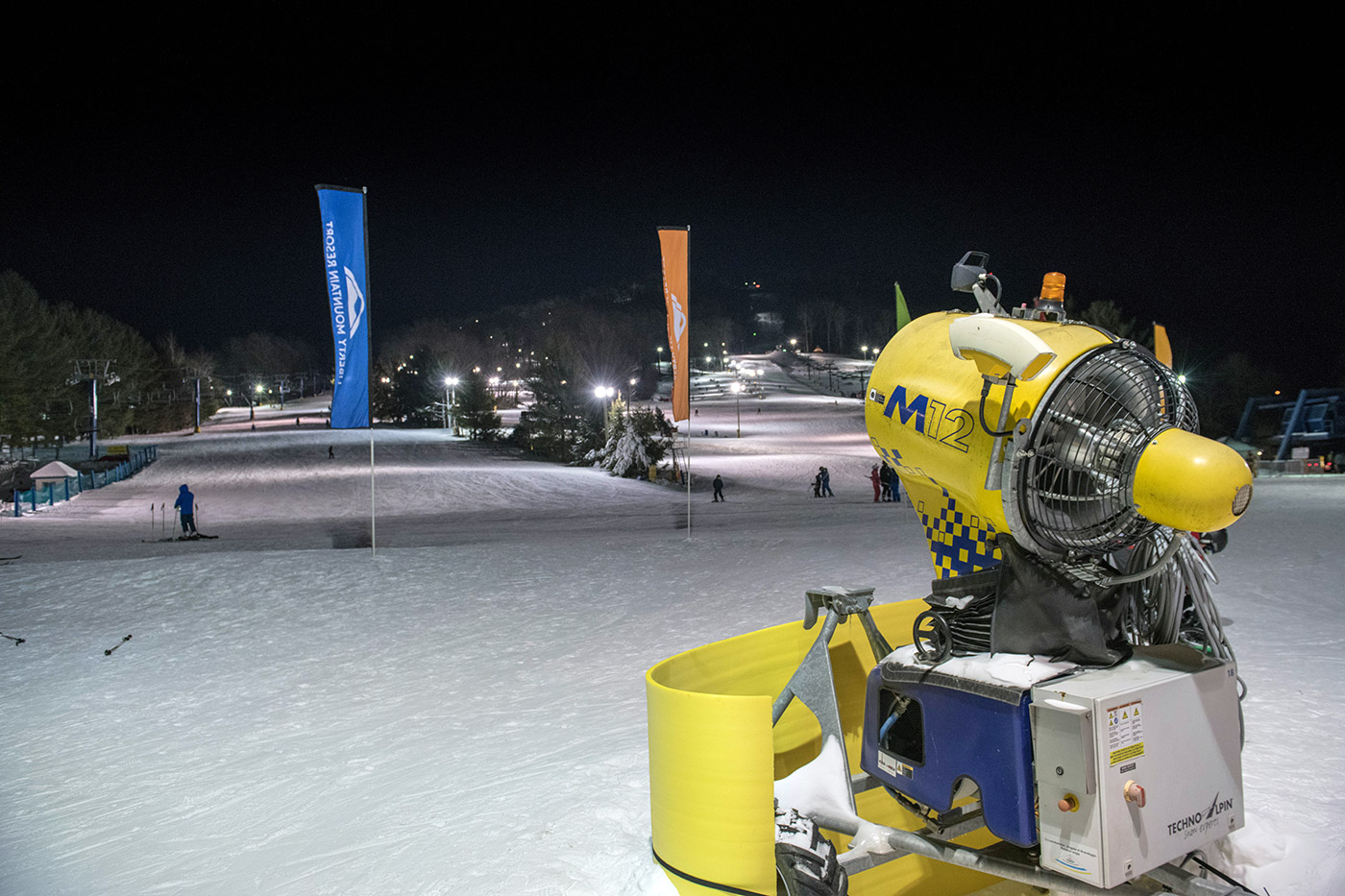 In recent years, Liberty has been upgrading snowmaking to include state-of-the-art airless guns such as this TechnoAlpin M12. Photo by M. Scott Smith.

On the other hand, there is something to be said for high-speed quads, and while Whitetail has one, Liberty does not. Liberty Mountain has five quad chairlifts, but they’re all fixed grip, and they’re absolutely in no hurry to get to the top of the mountain. I spent more time on the lifts than on the slopes this evening. And unlike Whitetail, the chairlifts at Liberty do not have foot rests, although they all had safety bars.

While the lifts are slow, the lift attendants were on point. Every lift attendant I encountered was friendly and held chairs for each loading guest. Some attendants were even telling jokes. On a small whiteboard near the entrance to the Eastwind Quad, an attendant had written a joke about how many times he’d heard guests ask “is it cold enough for you?” 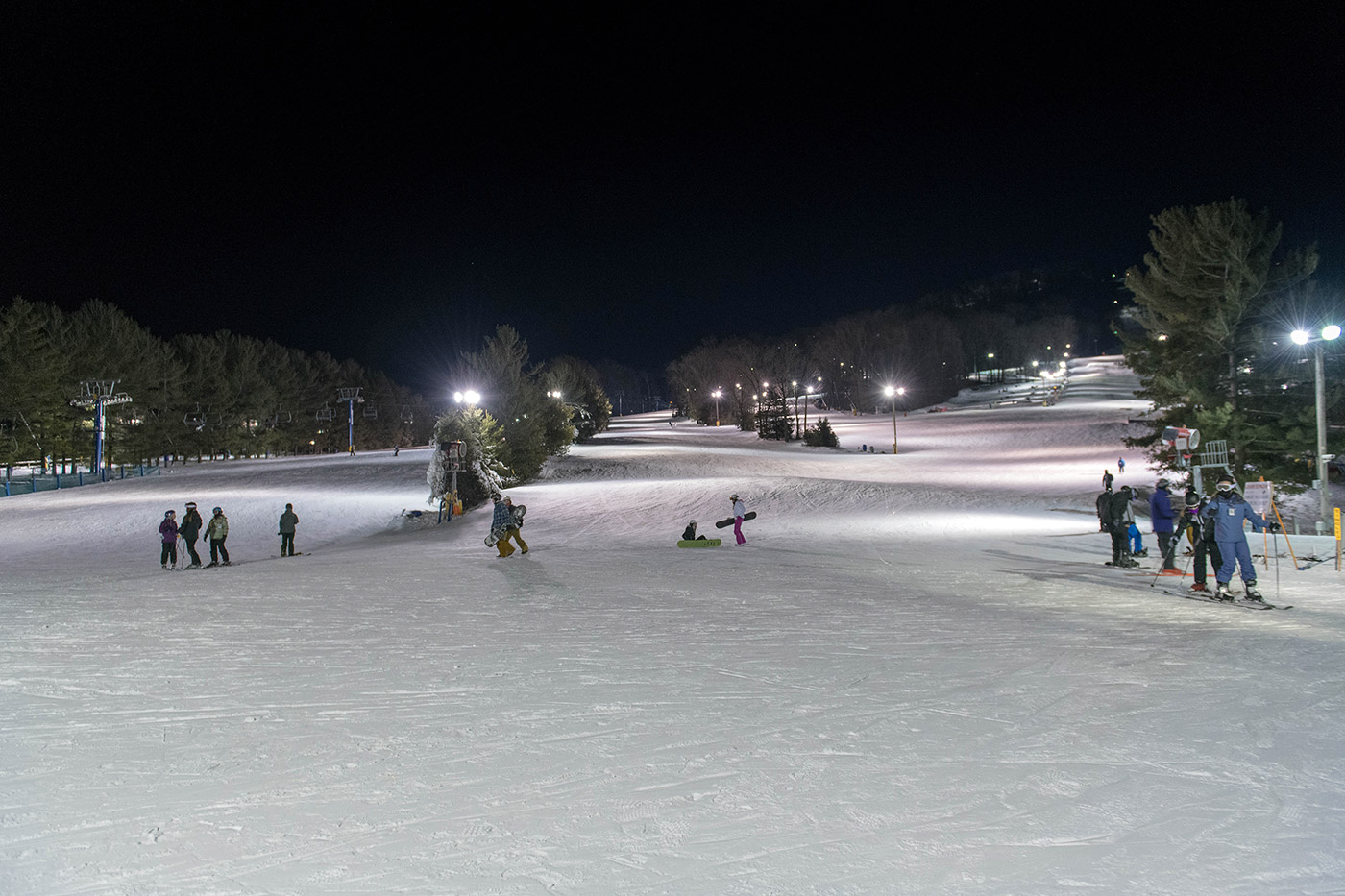 I spent most of my time on the backside of Liberty. On this Sunday evening, most crowds had left by the time I arrived, so there weren’t too many people on the slopes. But the backside was clearly less crowded than the frontside. Every trail had ample snow, thanks to an extended stretch of ideal snowmaking conditions. And the snow was still in pretty good shape, even though Liberty undoubtedly had a very crowded day. There were a few spots that were slick. I also noticed quite a few trails that had moguls, including some intermediate trails. I don’t know how many of those formed during the day or were intentionally spared by the snowcats, but it seemed like there were more mogul options at Liberty than Whitetail; Whitetail typically lets Exhibition bump up but otherwise grooms out trails each night.

One thing I noticed at Liberty that I haven’t yet seen at other resorts: there are LED light strips at the top of each lift, marking the spot where your ski tips should be up as you coast into the station. That’s a nice touch — a mix of practical and cool.

After a couple hours of skiing, I hadn’t made it to every trail at Liberty, but my chilly toes and cheeks were telling me it was time to head to the lodge. 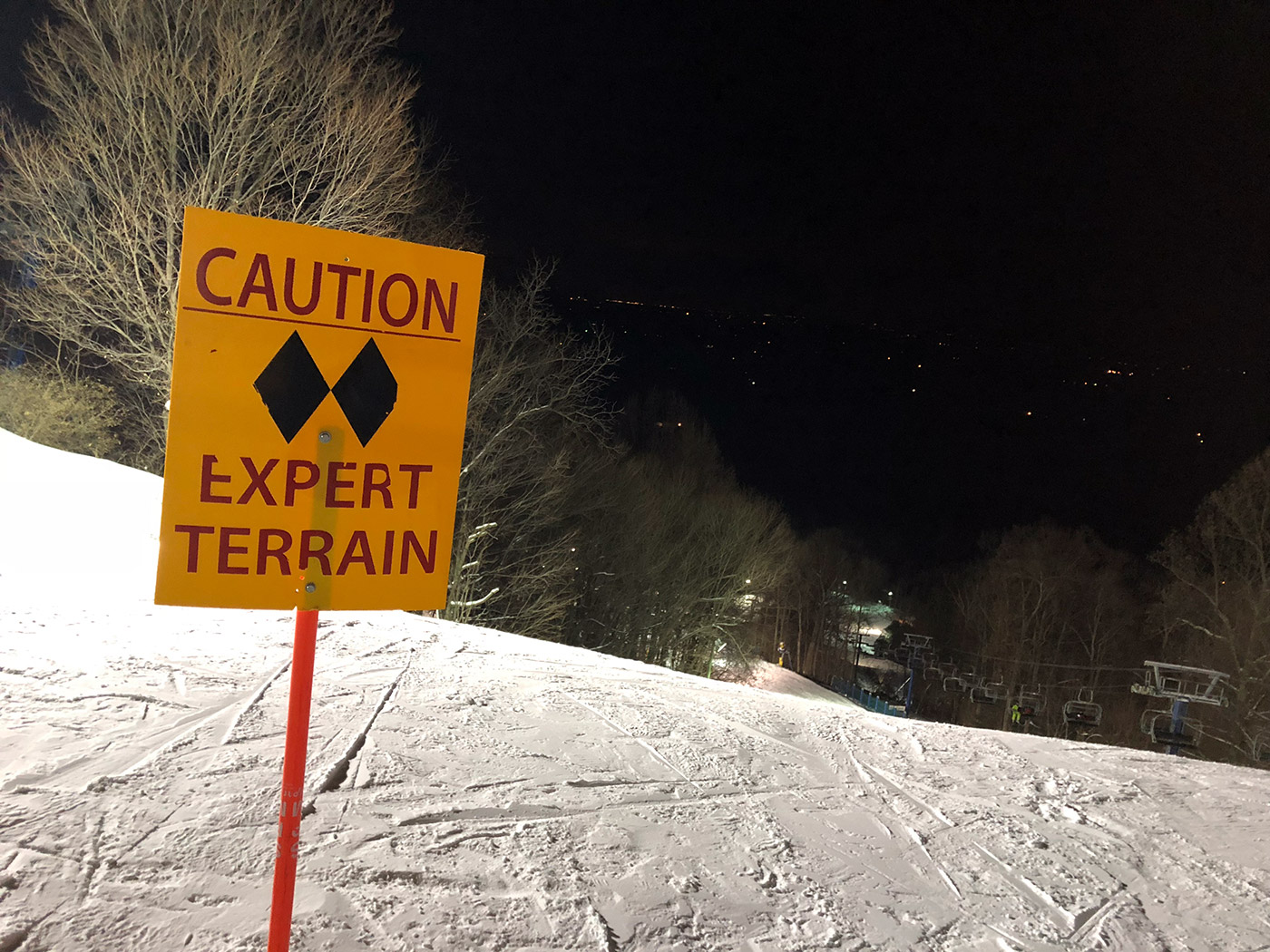 Several (short!) double-black diamonds are at the top of the backside. Photo by M. Scott Smith.

I like to perform a simple test at ski resorts to determine the quality of the food: I order a bacon cheeseburger and fries. So I headed to the Alpine Market, which is Liberty’s casual counter service restaurant. The Alpine Market had several themed areas. You could grab pizza, sandwiches, burritos, grill items, or even make your own salad at the salad bar.

It wasn’t entirely obvious how to order something from the grill, but eventually I caught the attention of an employee and ordered a bacon cheeseburger. I was surprised at how quickly it was ready, but then realized Liberty was just taking pre-cooked hamburgers (hopefully cooked sometime recently today), giving them a quick warm-over on the grill, and slapping them between buns. By the time I paid and arrived at a table, both the fries and the hamburger patty were lukewarm at best. The burger didn’t have lettuce or tomatoes, just the cheese and bacon — I’m not sure if lettuce and tomatoes were options. The burger and fries with a 20-ounce soda came to just under $20. And none of it tasted particularly good — especially not $20 good. It was just.. OK. Theme park OK.

The salad bar didn’t look half bad, and will probably be my choice if I dine at the Alpine Market again. 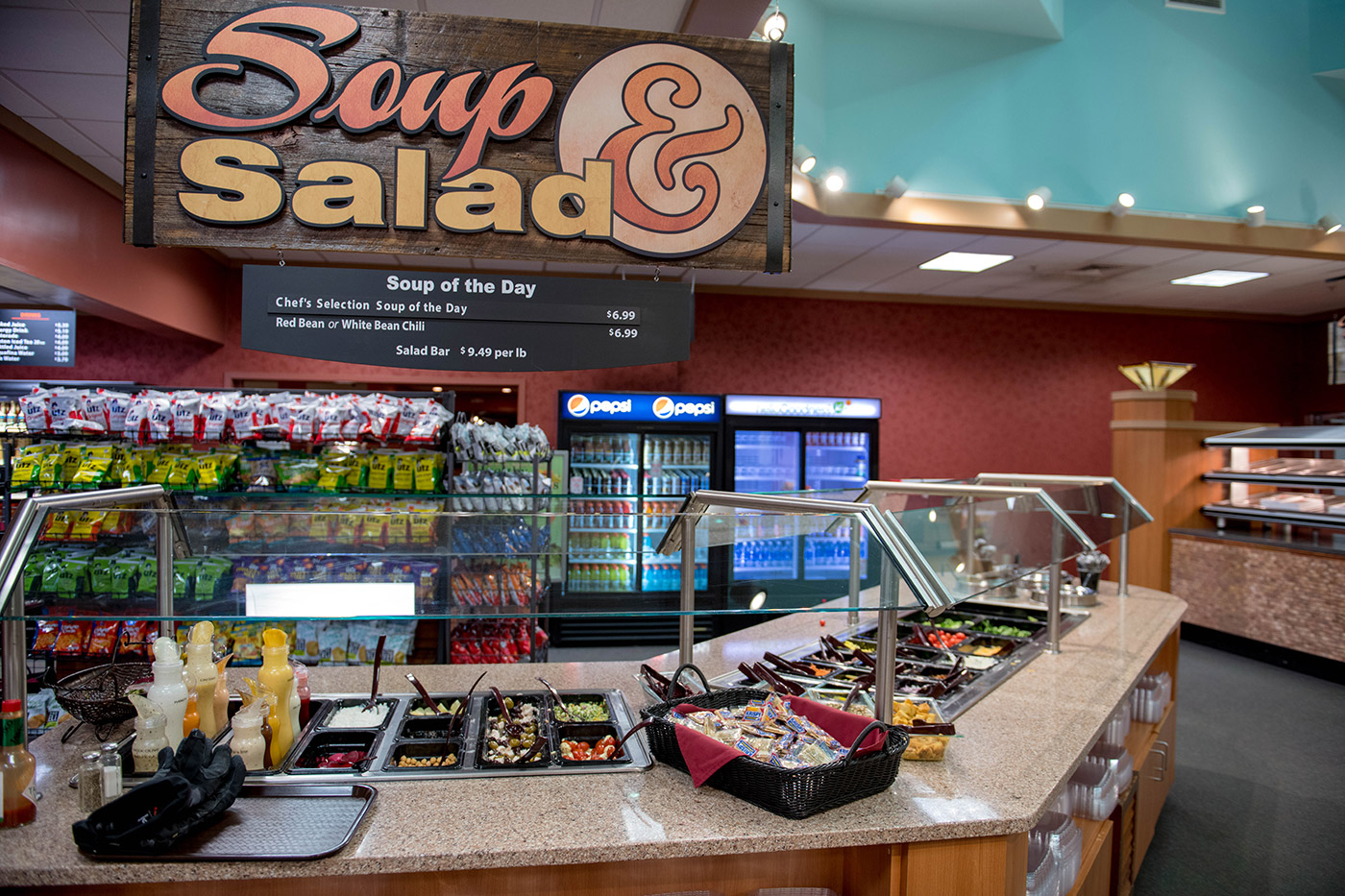 The Alpine Market includes a wide variety of dining choices, such as a salad bar. Photo by M. Scott Smith.

Overall, it was a nice evening at Liberty, and I’ll be returning. The variety of Liberty’s terrain, with some trails that meander their way down the mountain, made it ski bigger than its modest 620 vertical feet. Some of the trails were fairly narrow, and I imagine that could be a problem on crowded days when lots of skiers and snowboarders start funneling through them.

Liked your comparisons between Whitetail and Liberty and I share some of them.  Despite the shorter vertical, there is something about the Liberty terrain that I enjoy every bit as much as Whitetail.  The bumpy steeps at the top of the backside are short, but often present a nice little workout.  You might have to go to Deer Valley to get that excellent red meat sandwich you are looking for at a ski lodge.  The Colonel should weigh-in to confirm, but IIRC he gave this tenderloin burger at Deer Valley the thumbs-up: If I have to go to Deer Valley, then so be it.  I'm willing to make that sacrifice!  Anything for my readers.  :)

I'm a big fan of Liberty letting a blue trail bump up on the backside, I wish more resorts would let bumps form on easier terrain. It makes it so much easier to try moguls out on low-angle terrain.

Scott - glad you made it out to Liberty!  On the Alpine Market - there is a condiment bar at the end of the counter where you got your burgers/fries.  It has lettuce, tomato, onions, pickles, etc. that you can load up on your burger.  Sorry that wasn't made more clear to you during your visit.

If you want a really good burger, I'd recommend heading to McKee's Tavern near the ticket window.  Its a full service restaurant/bar where you can enjoy a cold draft brew with your freshly prepared burger (no heat lamp!).  Next time you come visit, give me a shout and hopefully we can cut some turns together.