Mohawk Mountain is a smallish ski area in the highlands of Connecticut that you have probably never heard of. But if you are an East Coast skier, you owe its founder Walt Schoenknecht a big “thank you,” as Walt and Mohawk Mountain were on the forefront of modern snowmaking.

East Coast skiing has always been temperamental and weather dependent. Low lying Connecticut and Mohawk Mountain were no exception. Thus after opening his ski area in 1947, Mr. Schoenknecht sought a more reliable surface for his skiers. His early snowmaking efforts involved crushing blocks of ice on the slopes. It worked a bit and provided a crude but effective sliding surface. However, Walt sought a better way, and a trip to Florida sparked a new idea.

Orange growers protected their crops from frost by spraying water on the trees when a frost was forecast. The water freezes and the ice protects the fruit. Applying this idea, Walt rigged a garden hose with a spray nozzle to an air compressor and in a whoosh of the white stuff, modern snowmaking was born! The device was refined and patented by the nearby Tey Manufacturing of Milford, CT. Mohawk Mountain installed the system shortly thereafter. 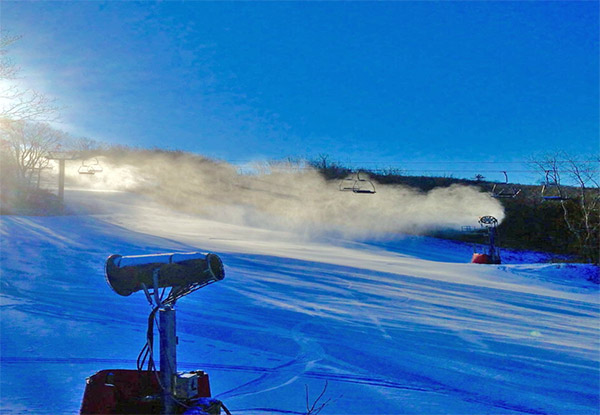 In the 1960’s snowmaking as a backup to natural snow soon became the norm at most East Coast resorts. This freed Eastern skiers from the fickle dependency on natural snow, allowing skiing to become a more dependable leisure activity and a more reliable source of revenue for ski areas. Purists will complain about “fake” snow, but without it there would be very little resort skiing south of New England. Blocks of crushed ice can only do so much.

Mohawk Mountain itself is a throwback to the era it was founded. The lodge is straight from the 1950’s, consisting of a large wood and steel A-frame type structure with large open spaces for families, a traditional cafeteria, and lots of ski memorabilia on the walls. Not much has changed in the 60+ years years it has been open. A mere 100 miles from New York City, Mohawk has always been a day use area for skiers from the Metro New York and Hartford area. There is no lodging at the ski area. 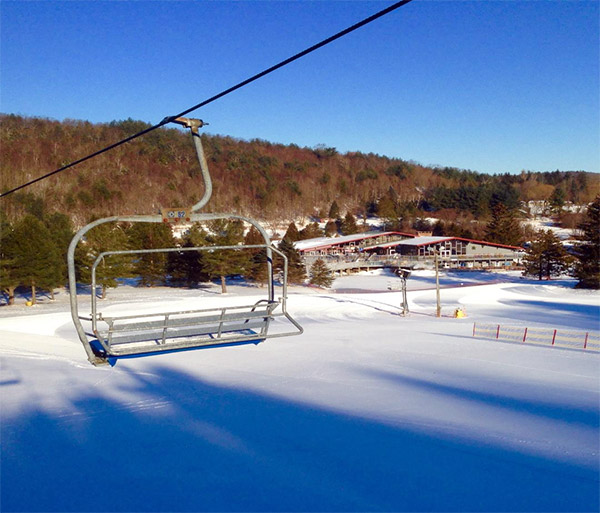 One of the five triple chairs with the retro lodge in the background. Photo by Robbie Allen.

The slopes rise up namesake Mohawk Mountain behind the lodge. A respectable 25 trails cover the slopes, serviced by 5 triple chairlifts. The terrain is well laid: from the front of the lodge, green beginner terrain is to the right and black expert to the right with blues in the middle. Of course snowmaking covers 100% of the terrain. Although having a mere 650-foot vertical, the resort skis a bit bigger due to multiple fall lines and many interlocking trails. 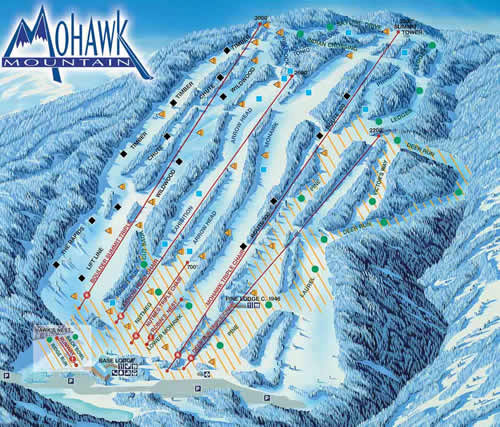 The day I skied in late December, 2017, the area was 80% open. The air temperature was in the teens and the signature snowmaking system many generations beyond the garden hose was in action. The groomers had been out the night before and all the trails were smooth corduroy. For Holiday Week the crowds started light but grew throughout the morning. However, there were no real lift lines to speak of. As is the trend these days, there were a number of folks going uphill as well as down. Mohawk has a liberal uphill policy.

If there is a drawback to Mohawk, it is the lifts. Although there is plenty of uphill capacity with five triple chairs, they are all fixed lifts. Thus the ride back up those 650 feet is a bit slow. Nevertheless, I was able to get some strong runs in on the primary blue trails Arrowhead and Mohawk. 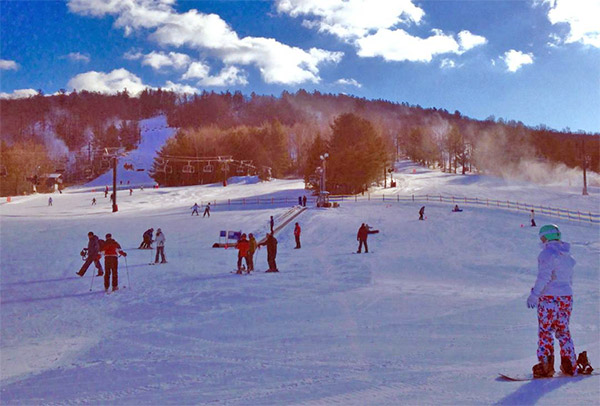 Overall it is good to see a slice of skiing history like Mohawk Mountain still in action. We can all thank Walt that we are not skiing on crushed ice! 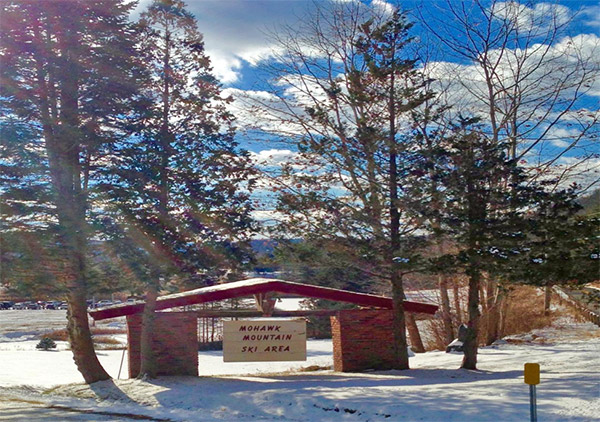 Even the sign is old school. Photo by Robbie Allen.