For the second year in a row, I have had the privilege of joining a group of close friends and fellow patrollers on their annual pilgrimage to Steamboat Springs, Colorado to enjoy epic powder skiing. This group of 20-30 friends and their families have been going on this trip for several years and each year it seems to get better and better.

The base area of Steamboat Springs. Photo by Mickey Nye.

Last year, our trip (my first) landed during a time when Steamboat received record snowfall for 2016 — over 400” by some reports. Last year’s trip timing also coincided with the Washington, D.C. blizzard that struck the Capitol area while I was in Steamboat leaving me in a bit of hot water with the spouse for being away! This year, Steamboat Springs broke records once again for most snowfall AND the weather in Washington, D.C. behaved leaving me less guilt-ridden than the year before.

Steamboat Springs once again delivered on the snow goods this past month with five great days of skiing. Steve Sobolewski, Patrol Director for the Liberty Ski Patrol and trip leader, did a phenomenal job of making all the arrangements for our group where we stayed at the Antlers at Christie Base condominiums. If you’ve never been there, the folks at Antlers simply do a great job with spacious condos and all the amenities you would expect from a four star resort. In addition to bedrooms that all have access to attached bathrooms, there is an outdoor heated pool and hot tub, ski valets for the ski-in/ski out location, shuttles to town by request and a welcoming staff that goes above and beyond. 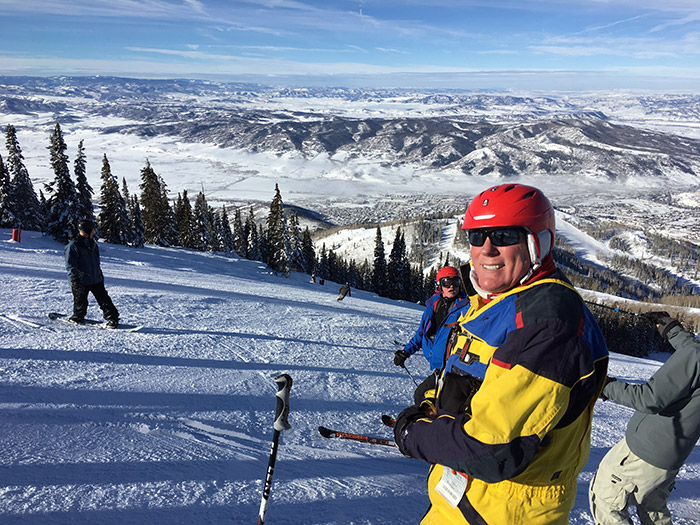 In fact, a great example of this happened midway through the trip, when one of the four condos we occupied had a problem with the refrigerator. The maintenance staff at Antlers checked it out and when it was clear they could not fix it quickly, they procured another refrigerator and hauled it up to the second floor condo where it was installed and working with no loss of food for the group. Nicely handled! Routine requests like replacing a light bulb and additional pots/pans for our group were handled quickly and efficiently by the staff. It’s no wonder the group enjoys going back year after year!

Of course, spending time in the condos was an evening affair and the days were occupied with more snow-filled endeavors. For those that have never been, Steamboat Springs is about a 3- to 4-hour drive from Denver. Access for those on the East Coast is best achieved by flying into the nearby Hayden airport — a small regional airport served by all three major carriers through their various main hub airports and a thirty minute shuttle ride away. Ground transportation companies like Storm Mountain Express provide cost-effective options. 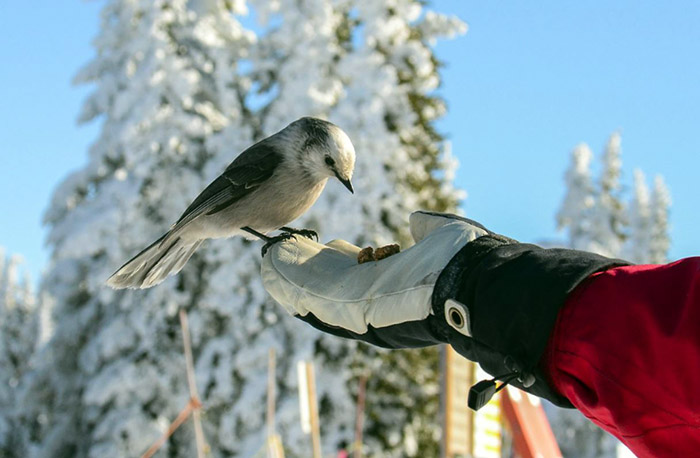 The resort’s more removed location means that weekend crowds tend to be less intense than areas closer to Denver; and with nearly 3,000 acres of permitted terrain, there is plenty for everyone. Our first day was a nearly perfect, sunny, bluebird day. Hard to imagine a group of 20+ skiers and boarders all gathering together and while we did so for the most part, we naturally split off into smaller groups as the day went on. Because it had not snowed appreciably for a couple of days beforehand, we skied mostly packed powder conditions with the occasional foray into the trees for a taste of the legendary Steamboat champagne powder. 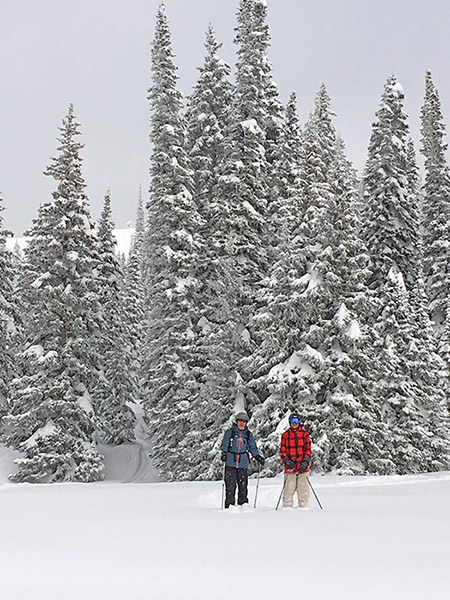 Finding the powder on Day 2 with Jim Chen and David H. Photo by Lisa Smith.

Fortunately, days two and three delivered on the promised snow and we skied as it fell and fell and fell. In addition to the group that came up from the DC/Baltimore area, we were also joined by former patrollers Lisa and Rob who relocated to Denver a few years back. Admittedly, folks join patrol and life can take them to other locations, but the friendships continue to endure! Despite having moved away some time ago, we all still keep in touch with patrol alumni through modern media (e.g., e-mail, text, Facebook, etc.) - but nothing beats seeing folks in person! 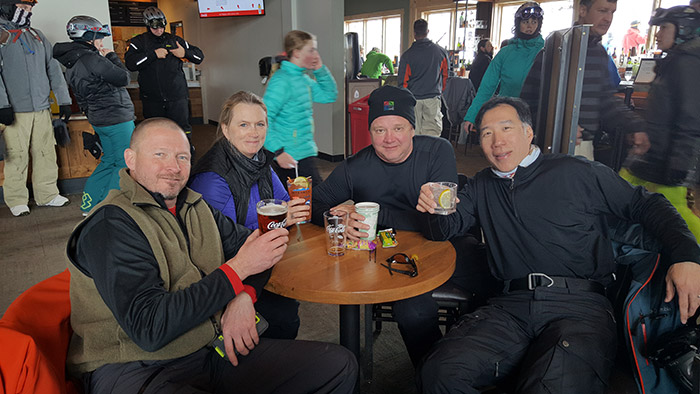 Days four and five saw more mixed snow and sun allowing us to finish up the ski week with some great runs and really sore legs! I have to admit, as I’ve crossed over the mid-life threshold, the knees do not hold up like they used to — still hard to beat the incredible fun at Steamboat thanks to good friends and deep snow!

As a last note to this article, I would like to say that joining Liberty Ski Patrol over twenty years ago has been an incredibly fulfilling and humbling experience. In addition to being able to give back to the sport that has been my number one passion for nearly all of my life, I have also found life-long friends among a group of kindred spirits who all believe in helping our fellow travelers in life regardless of who they are or where they came from. 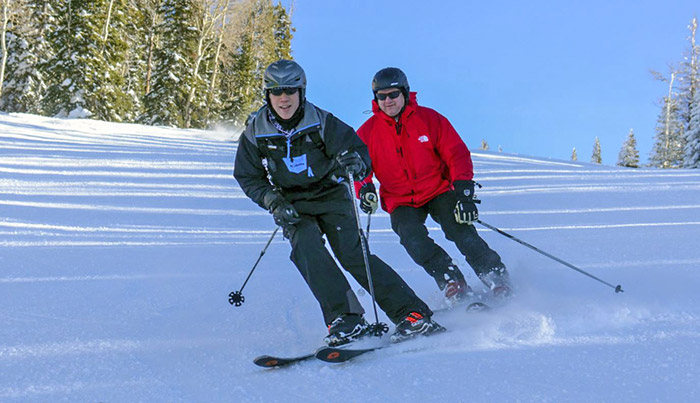 If you’d like to join us in our mission, please visit the Liberty Ski Patrol website at: http://www.libertyskipatrol.org/join-our-team. The ski-off for the 2017-2018 candidate class will take place at the end of February and there are several steps to complete before that time so don’t delay in applying! Joining the Liberty Ski Patrol means finding 130 new friends that all share the same passion! 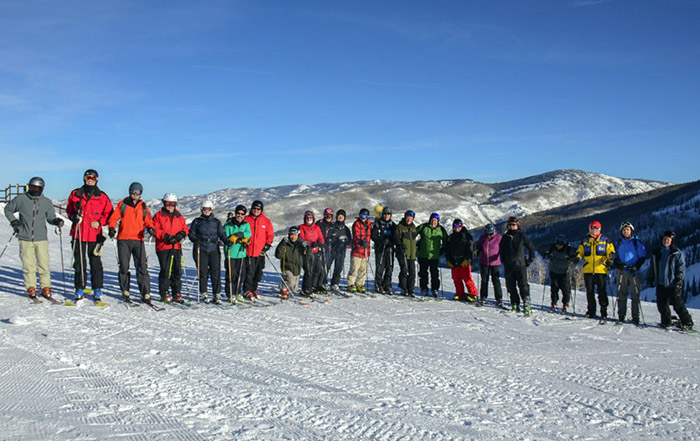 Some of the crew at Steamboat (author in the middle). Photo by Mickey Nye.

Sounds like good times!  The fun of skiing goes exponential when you hit the slopes with a great bunch.