What do you get when you mix a ski area (Stevens Pass in Washington state), an outstanding cause (cancer research) and a bunch of motivated skier and boarders? What you get is a fun but tiring event. Hope on the Slopes (HOTS) is an event run by the American Cancer Society. HOTS combines the passion of finding a cure for cancer with a love for skiing and riding. The idea came to HOTS founder Dave Ludwig about ten years ago. He was looking to use the RFID technology that was just beginning to emerge in a fund raising event. Tracking vertical feet seemed like a great way to raise money. HOTS now runs events at over 16 ski area areas across the country. The events are “competitive” but family friendly. It is only as hard as you make.

I made it almost too hard… In the past HOPS had tracked vertical feet. However, probably due to too many middle aged men hopped up on Red Bull crashing into trees at 2 a.m., the rules were adjusted so that only two runs an hour were required. However this seemed too easy to me, a middle age man with a Red Bull problem, so I set a personal goal to ski 100,000 vertical feet.

It seemed an easy goal. I figured I normally ski from 15,000 to 25,000 feet in a typical ski resort visit. Normally I visit for 4-5 hours. So it stands to reason if I had 24 hours to ski I could easily make 100,000 vertical feet. Or so I thought. Seriously, this was the hardest athletic event I have done. This, from an aging endurance athlete who has finished 5 Ironmans, many marathons, and lots of open water swims. This was tough… very tough.

Steven Pass is about 90 minutes east of Seattle in the Cascade Range. At 4,000 feet elevation, it has been an operating ski area since the 1930s. The resort has 37 marked runs, 10 lifts and 1,800 feet of vertical on three sides of two different mountains. Steven is a medium size area for the West but would rival the big resorts in the East. Although it is primarily a day use area, night skiing is also offered. There is no on-site lodging other than the RVs in the parking lot. Stevens is known for having reliable snow, a laid back attitude and easy access to backcountry skiing. Thus it was a great location for a skiing 24 hours! 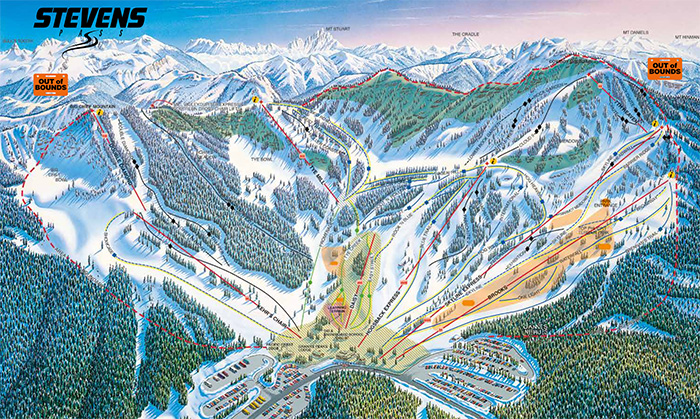 I was full of energy and raring to go when I signed in and headed out to the slopes. It was 9 a.m. and I was aiming to ski until 9 a.m. the next day! Unfortunately no one had let Mother Nature know, thus the 1-3 inches of snow expected was falling instead as rain, a problem common to the Northwest as much as it is to the Mid-Atlantic. Luckily the resort had received 312 inches of snow so far that season so the coverage was fine. It was just me who was not. At around 11 a.m. when I was soaked to the bone I was thinking “Do I really want to do this for another 22 hours?” I kept thinking of the folks who had donated money to my cause (there was a $250 donation requirement) and decided I could not quit on them. So I outfitted myself with some high tech rain gear (i.e. a plastic bag) and forged on. I am glad I did.

The rain remained off and on all day. In the Northwest one of the other challenges you have to deal with is fog. There were a couple of times when the fog rolled in and I could not see more than 20 feet ahead. I had to pick my way down the slope aiming for what I thought was people below. Later when the fog lifted and I saw what I had skied, I was more scared than I had been while skiing it.

As I mentioned, Stevens has a laid back altitude. This is especially apparent during night skiing. The Northwest is blessed with a long twilight that lingers for more than an hour, thus when the night came on you could still see well on the non-lit trails. However once fully dark, those trails were never closed or roped off like they would be out East. I spoke to a patroller about this and he said that is the way it always is done here. “Ski where you want, skier beware!” I saw many folks skiing with head lamps racing down on unlit trails. Crazy! There must be fewer lawyers out here…

At 10 p.m. there was a mandatory one-hour down time and the slopes were closed. At this point I had 61K of vertical in the books. I figured I could ski 40K in the 10 hours remaining easy. So I took a 40 minute power nap on a bench and was back up at 11 p.m. ready to go when the slope reopened

The way the overnight ski works in a HOPS event is that the resort opens one lift and one trail on a rotating basis through the night. This enables them to groom for the next day and keep some control. At 11 p.m. they open Kehr’s Chair which fed “Showcase,” a hard blue trail. Unfortunately, Kehr’s chair is one of the oldest and slowest (1,300 skiers per hour) at the resort. It was a double with wood seats and no safety bar. To make matters worse, “Showcase,” which had been one of the softest trails all day, was quickly groomed during the one-hour down time. It promptly froze hard.

Moreover, it is a steep trail with no run out, like “Squirrel Cage” at Wisp but three times longer. So it required good turns on very tired legs to stay in control. The combination of a slow chair, frozen trail and one very tired skier put a hurt on my body. At 1 a.m. I found myself in a bad place, when I almost forgot to get off the chair at the top of the lift. I knew I was in trouble. Thus I came in for another 20 minute nap. I was so tired I didn’t even take off my ski boots!

The nap, a can of Red Bull, and the opening of the Hogback Express at 2 a.m. saved the day. No longer was I stuck on that miserable frozen run. The Hogback Express was a high speed quad which could lift 2,400 skiers per hour! Off the lift they had a nice freshly groomed blue trail, “Hog Wild.” The trail had several pitches, some nice turns and a long of run out, meaning you could barrel down it. My top speed was 57 mph on this run! Hog Wild was my ticket to finishing. I was back in the game so I could reach my goal. 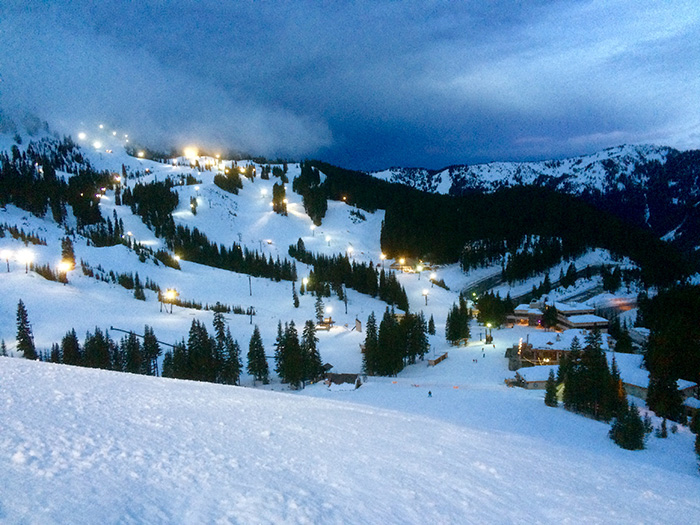 The sun is rising. Looking down Showcase. Photo provided by Robbie Allen.

At 6 a.m. they moved us back to Kehr’s chair and “Showcase,” but by now it had been properly groomed. More importantly I only had less than 5K to go and two hours to get there! No problem. I finished the 100K of vertical at 7:40 in the morning just as the sun was rising. I stayed out ‘til the end at 9 a.m. scoring a total of 104K and over 109 miles of skiing. Later I would learn I lost about 5K when the resort GPS rebooted at midnight. You are not supposed to ski overnight according to the software. So I could claim close to 110K but 104K is fine with me.

Overall it was fun but a very tough event. Sure I could have stayed in the lodge snacking on cookies and hot chocolate, coming out to make the required runs, but what fun is that? I suffered! HOTS is a great event for a great cause. I highly recommend you try the event sometime in your skiing career. You never know, maybe you can beat 100K! 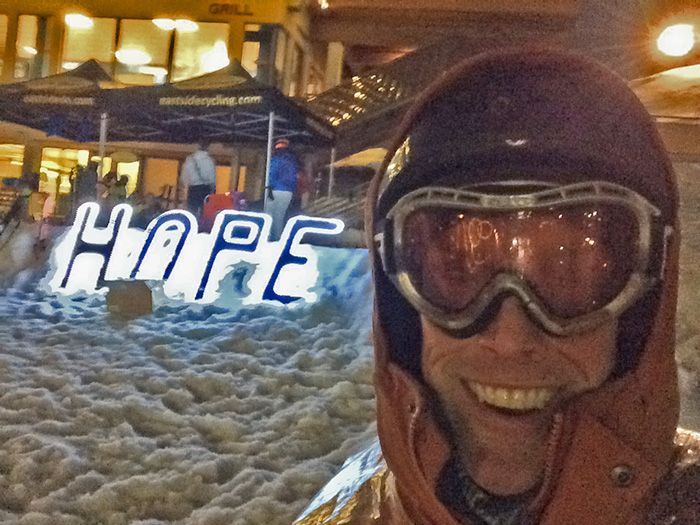 The author is all smiles at 7:30 a.m. when he finished 100,000 vertical feet of skiing. Photo provided by Robbie Allen.

Congratulations, sounds like any other endurance event: miserable, but somehow fun. Did you have to do two runs every hour, or could you say nap for a solid hour and then do four runs in the next hour?

Very, very impressed!!  I skied in heavy rain at Park City on 3/6/16, but for only about three hours.  Can't imagine doing what you did for another 21 hours.  I hope you took a good long hot shower and nap after that event. 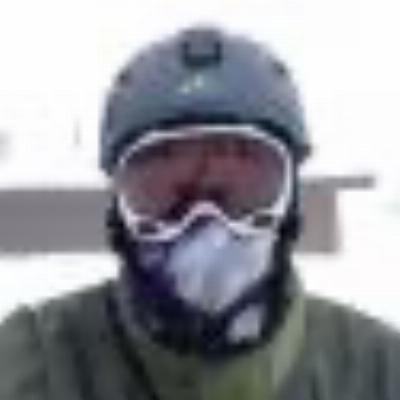