It seems that the weather here on the East Coast can’t make up it’s mind. It’s cold, it’s warm, it snows, it sleets and then it rains. And the rain washes away the good snow. So if you don’t hit it just right, you are skiing on hard-pack. Things aren’t much better out West with warm temps and not a lot of snow. There is, however, one place where powder junkies may feed their addiction to the white stuff. High up on a grand plateau, Grand Mesa to be precise, Powderhorn Mountain Resort beckons groomed-granular weary. 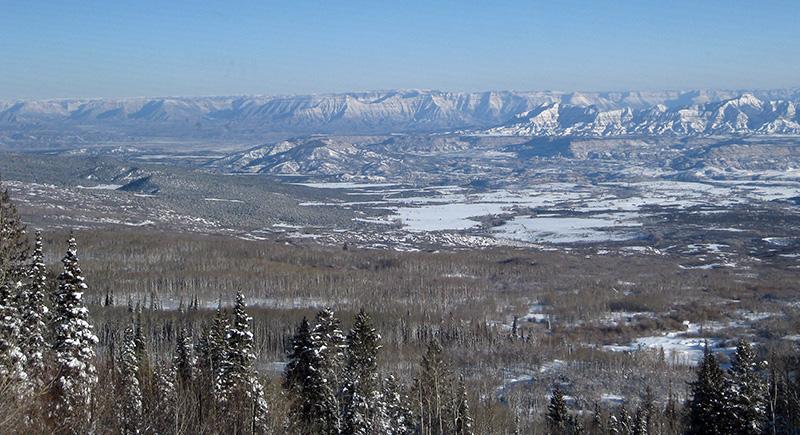 My wife, Karen, and I lucked into finding Powderhorn. Our good friends (Mike and Julia) had timeshare points to use up and wanted to go skiing. All of the big-name Colorado resorts were booked and they settled on Powderhorn. The resort is an easy forty-five minute drive from Grand Junction Airport and they had United miles to use. Our friends booked a two bedroom slope-side condo and invited us to come along. Karen and I were also flush with United miles. So how could we pass up an almost free ski trip?

We arrived on “the mesa” late on a beautiful sunny afternoon and checked into the resort after stopping for provisions at a grocery store. (The resort and the nearby town of Mesa are short on dining options.) The overnight prediction called for an inch of snow. When we got up the next morning, seven inches of fine white snow had already fallen and it didn’t look like it was going to stop! The four of us booted up and hit the slopes.

Being an East Coaster, I’m still a bit confused sometimes when confronted with actual snow. It’s a bit disconcerting when I see my boots and skis disappear in the powder. We made our way down a couple of the blue slopes (Bill’s Run and Maverick) as the soft snow continued to fall. Karen suggested that we rent fatties for the day. I poo-poohed this idea figuring that I could master the powder in my all-mountain skis. 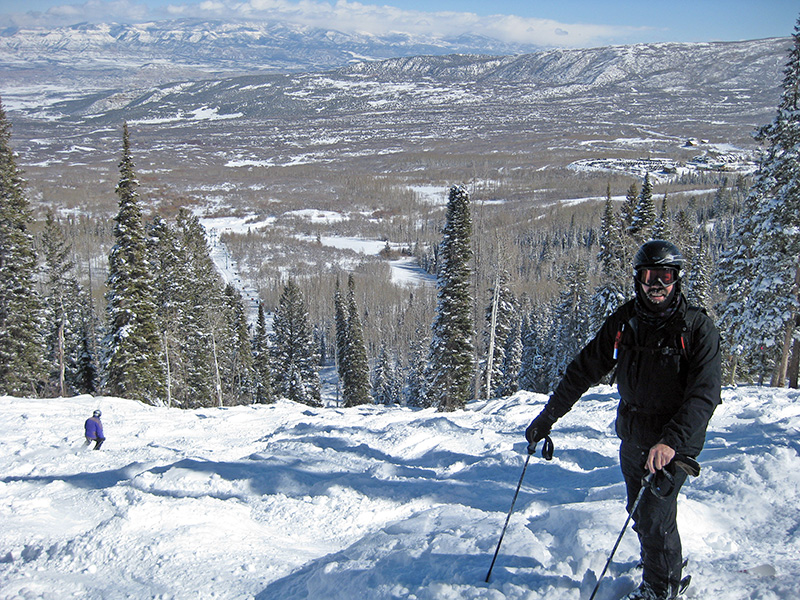 Mike on the bumps. Photo provided by Matthew Graham.

The resort has 63 trails, a vertical drop of 1,650 feet, five lifts and a summit elevation of 9,850 feet. We traversed the mountain trying out about a dozen slopes, including a few black runs. The snow finally ended as we called it a day when the lifts shut down at 4 p.m. Over a foot of snow had fallen. Wow! Were my legs tired! I usually never get tired when skiing. Back down the lodge, I overheard a couple talking about how glad they were that they rented fatties for the day and how it had made the skiing so easy. Karen gave me that look again. I really should try listening to her sometime.

The next morning we woke to find another couple inches of powder on top of mostly groomed terrain. The sun shined brightly and we could enjoy the view of the high mesa. A beautiful painted desert of white and rust extended to sheer cliff faces on the horizon. Snow covered buttes kissed the azure sky and rifts of snow separated the strata on the far away mountains. Our condo was only a short walk to the main “Take Four” lift. Trying to get a group of skiers out the door early is never an easy task. (I forgot my wallet, these are the wrong goggles, oh, a need to grab some tissues — UGH!!!!) Somehow we managed to all get our tickets and be at the lift before it opened. 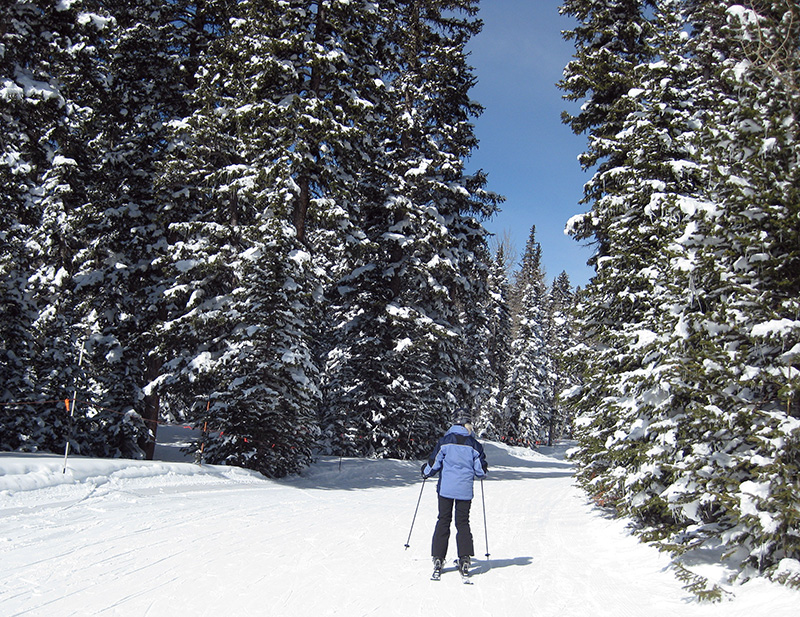 We again started the day with the longer blue runs and then traversed the mountain on the wonderfully long Maverick to Dude to Lower Snowcloud intermediate connecting route. The West End side of the mountain is also served by a high speed quad. Powderhorn isn’t big by Colorado standards. For a quick three day ski trip, however, it’s just the right size. By lunch on this second day we already had the mountain wired. Each of the two peaks have a mix of blue and black runs and a nice long blue connector trail to go from one side to the other. The few beginner trails are at the bottom of the mountain served by a small lift and a magic carpet (for the bunny slope). And there are a few glades on the Western side that we all avoided. It’s the ideal intermediate skiers resort! By the end of the day, we had returned to the main face and were hitting the moguls on Wonderbump — nice big mounds of snow without icy downhill faces.

For our last day, we again were treated to another inch of fresh powder. And being a weekday, no one was there! The four of us spent the day zooming down the wide open terrain right back onto the lift. I usually count my number of runs for the day — shooting for at least twenty-five when in the Rockies. For the first time ever, I lost count! I was lost in the powder at Powderhorn.