Editor’s Note: DCSki Columnist John Sherwood just returned from a 13-day, 3-resort ski safari of Austria and Switzerland. This report, on Sölden in Austria, is the second of three articles on this trip, describing his experience in Austria February 1-3, 2004. (His first report focused on Ischgl, Austria, and his third report focuses on St. Moritz, Switzerland.) 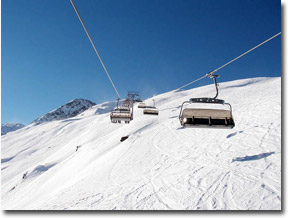 Sölden is one of the highest, most snow-sure resorts in the Austrian Alps. With two glacier areas, it offers year round skiing. Sölden has been in my crosshairs for three years now, and this season, I finally nailed it. It exceeded my wildest expectations. Why? Steep, disgustingly wide slopes coupled with mind-boggling vertical. At Sölden, it is possible to bag 1,993 meters/6,538 feet of vertical in a single run! You go from glaciers to spruce trees in one journey. No resort on the North American continent comes close to matching this big perpendicular. At times, I felt like I was sailing on a vast white sea rather than skiing because the runs at Sölden were so big and so long. As my wife Darina put it, “having skied St. Anton, Ischgl, Lech, and Zürs, I thought I had seen the best skiing in Austria but Sölden truly surprised me.”

So why have so few people outside of Austria gone to Sölden? The resort received a lot of international publicity this year by hosting the first men’s GS World Cup event in October on its glacier - one that Bode Miller won. Sadly however, the town has a reputation for being less quaint than some of its Tirolean rivals. One German gentleman I met put it this way, “the skiing is perfect but the town is ugly.” To me, the town wasn’t bad at all. Yes, the main street is busy with traffic and yes, there are some erotic bars, but the hotels meet the high Tirolean standards for hospitality. Furthermore, Sölden has a large number of very attractive yet affordable accommodations, and some beautiful parks and paths on the left bank of the Öztaler River. Finally, Sölden boasts a number of amenities rarely found at smaller resorts: a cinema, an ice rink, indoor tennis courts, and the Freizeit Arena water center - a veritable smorgasbord of pools, saunas, and spa treatments guaranteed to make your tired body feel alive again after a long day on the slopes.

I stayed at the Sonnenhaus Tamara, one of the many hotels owned by the Riml family. Like the Strolz family of Lech, the Rimls own many of the enterprises in Sölden - everything from ski shops to mountain restaurants. This family pours its heart and soul into the establishments they run and it shows: everything from the Wiener schnitzel served in their dining rooms to the edges on your rental skis is flawless. Since we had a half pension plan, we took all of our meals at one of the Riml’s many restaurants. On Tuesday night, the Rimls chartered coaches and transported all guests from their hotels to a mountain hut. There, we feasted on a traditional Tirolean mountain meal and enjoyed music and dancing afterwards. Those wishing to stay closer to most of the ski terrain at Sölden have the option of paying a little more money and staying at Hochsölden - a cluster of luxury hotels that sit at 2,090 meters/6,856 feet on the side of the mountain. The advantage of Hochsölden is its proximity to the Giggijoch mid-station; the disadvantage is that the best way to reach the town is by skis: the drive takes 45 minutes and follows a narrow road, with many switchbacks.

It only took us two hours to drive from Ischgl to Sölden, and so we managed to get some turns in on our first day - a Sunday. Sunday is a big day at most resorts in the Tirol, but at Sölden, it’s even bigger owing to the large number of weekend and day visitors the resort gets from Germany. Weekend crowds at the resort look big but the lift lines moved quickly and Sölden’s monster pistes spread people out extremely well. If you take the North Face trail at Seven Springs and multiply the width by five, you’ll get an idea of just how wide these trails are: “a carver’s paradise,” to quote Darina. Many also contain wonderful double fall lines, sharp drops, and other cool terrain features, making them a pleasure to ski multiple times. For those wanting even more terrain features, the terrain park Giggijoch offers some major kickers with killer views of the Öztal Alps - the place where Hannibal of Carthage crossed the Alps with 60,000 men and 37 elephants to defeat the Roman Army. Every April, Sölden puts on an extravaganza like none other in the ski world to celebrate Hannibal’s historic feat. More than 500 actors, including live elephants, stage a huge show that recreates the crossing on the Rettenbach glacier.

For our last run of the day, we sailed from Rotkoglhütte to the town - a 1,285 meter/ 4,215 foot big mountain decent. We missed the turn for the intermediate (red) trail at Giggijoch and ended up on the black 20 trail. The first horseshoe-shaped headwall on that trail, just below mid-station, can be intimidating to someone unaccustomed to steep terrain. It looks vertical but it’s big and well-groomed. Following Liberty instructor Otto Matheke’s advice for steeps on the DCSki Message Forum, I kept my body and my skis pointed down the fall line and just cut hard turns on the Fischer slalom skis I had rented. Miraculously, the skis kept me in solid control. Enjoying the black trail and hoping most novice skiers would avoid it, Darina and I decided to ride it to the bottom. The trip proved crowded but manageable. People ski well at Sölden and are surprisingly polite - especially in lift lines.

Giggijoch attracts more crowds than the Gaislachkogl side because of its relatively new high-speed, 8-person gondola and because it is the gateway to the resort’s two glaciers. We had planned to hit the glaciers on the second day but changed our minds at the last minute. At Sölden, one must take five separate lifts to access the Rettenbach glacier and six to get to Tiefenbach. Beautiful snow conditions and steep piste made me anxious to let it rip and just ski. Fortunately, Sölden offered a nice alternative to the glaciers: the Gaislachkogl area. One can get to the top of Gaislachkogl (3,058 m/10,032 f) in two easy, relatively uncrowded gondolas that hold 24 people per car. From there, you can cruise all the way back to the village on magnificent intermediate runs - a 1,681 m/5,515 vertical evolution.

Another hidden treasure on the Gaislachkogl side of the mountain are the fast and efficient mid-mountain access chairs - especially the Heidebahn, a domed, high-speed, quad. Heidibahn services excellent intermediate terrain on the far south wing of the resort. On this side of the resort at the Heidealm hut, we also got a chance to sample Tirolean gröstle, a local specialty consisting of roasted potatoes, herbs, and bits of meat with a fried egg on top. After lunch, we played on the steep black trail above the mid-station and rode to the top of Gaislachkogl. There, I saw some off-piste skiers tackling some serious cliffs, but I opted for the relatively benign red 1 trail - a steep but groomed intermediate run.

Another big advantage of Gaislachkogl is its easy access back to town on the blue 8 run - a run no more difficult than Salamander for all but the final sections of the trail, where it turns red (intermediate) to take one over a few small headwalls above the village. From the Gaislachkoglbahn station, a convenient free ski bus whisked us back to our hotel on the north edge of the town. While one could easily walk from one side of Sölden to the other in sneakers, the bus is far more comfortable when one is in ski boots.

On my last day at Sölden, I made a wrong turn on my last run down the Gaislachkoglbahn station and ended up at the mid-station double. The mistake gave me a chance to sample the red 10 trail - one of the best low altitude red runs I’ve skied in the Alps - a classic New England tree-lined run similar to Upper Shay’s at Snowshoe or Perry Merrill at Stowe. Yee ha!

Like many successful resorts here in the U.S., Sölden still has a few minor lift bottlenecks that need to be addressed - especially on crowded weekends. The good news is that the resort is building new uphill transportation at a rapid pace. Last year in fact, it installed a new gondola on Rettenbach glacier. In the next five years, I fully expect Sölden’s infrastructure to be in the same league as St. Anton or Ischgl. It’s got strengths in all the right places: high altitude, east facing slopes; acres and acres of out of the ordinary terrain; two glaciers; outstanding lifts; the potential for a shared lift pass with Obergurgl (another huge, snowsure resort just down the road); and plenty of expansion terrain in the Vent valley. Don’t miss it.

bogdan
July 13, 2009
it's quite late for a comment having in mind that the articles were written in 2004 :)
next year i want t go in austra in january. I've got to choose between soelden and ischgl. which one shoul I pick? i am an intermediate and my friands are at the same level or below.

JimK
July 14, 2009
I assume you read John Sherwood's companion piece on Ischgl? See link to it at top of this article. Pure hearsay, but Ischgl may have a bit more of an international reputation for chic/cachet, plus the opportunity to ski between Austria and Switzerland. It may come down to which one is more convenient for your travel arrangements. Both have good snow records (esp. Solden), active night life, and great lift infrastructure (esp. Ischgl) with a large amount of intermediate terrain. I don't think you can lose at either destination in January. Here's a good website for more comparative info: www.wtss.co.uk