Editor’s Note: DCSki Columnist John Sherwood just returned from a 13-day, 3-resort ski safari of Austria and Switzerland. This report, on St. Moritz in Switzerland, is the third of three articles on this trip, describing his experience February 4-6, 2004. (His first report focused on Ischgl, Austria, and his second report focused on Sölden, Austria.) 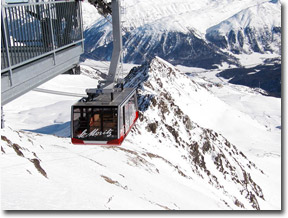 The ostentatious but surprisingly truthful slogan of St. Moritz is: “St. Moritz: Top of the World.” This resort lives up to its bold slogan for very good reasons: champagne powder, stunning natural scenery, world-class cuisine, and a huge array of activities for non-skiers.

We came for the skiing and were not disappointed. When we arrived at St. Moritz, three hours from Innsbruck and 2.5 hours from Milan by car, we were concerned about the snow. Things had warmed up considerably since our time in Ischgl and we worried that lower slopes would begin closing and upper slopes would turn to mashed potatoes. St. Moritz did not let us down. In fact, we experienced Utah-like conditions:warm weather, sunny skies, and perfect snow on the majority of the terrain. How is this possible? St. Moritz sits at a very high altitude (1,820 m/5,970 f), and is extremely dry. Therefore, the place holds snow well even though it gets only 30 days of all types of precipitation per year - a point of pride for the Tourist Board because that makes for many sunny days.

We stayed at the Hotel Alte Post in St. Moritz Dorf - the most exclusive of the three major base areas. The other two are St. Moritz Bad and Celerina. Dorf connects very easily with the largest and most modern part of St. Moritz: the Corviglia ski area. Corvigilia is the Deer Valley of Europe - loads of perfectly groomed, lower intermediate runs served by a modern lift system. Last year, the resort hosted the World Championships and updated a large number of new lifts to accommodate the extra crowds, including the tram to the top of Piz Nair (3,055 m/10,022 f). These improvements combined with lift tickets and accommodations priced higher than most other resorts in Europe virtually eliminated lift lines and allow visitors to ski corduroy well into the afternoon. At St. Moritz, you get what you pay for: top of the world quality.

We had the very good fortune of skiing with a representative of the tourist board, Fabrizio D ‘Aloisio, on our first day at St. Moritz. Fabrizio not only was a fabulous skier who showed us the best terrain of Corviglia but also gave me a wonderful history lesson on the resort. I learned that the resort was originally frequented in the 19th century by British tourists. These men built the Cresta Run in 1884, the first tobogganing run in the world and the first organized winter sports activity in the world. The Cresta Run is still managed by a private, all-male British Club. Guests (who must also be male) may pay $404 dollars for the opportunity to make five runs on the difficult course on select guest days.

Competitive Alpine skiing did not begin at St. Moritz until 1893, but St. Moritz is much more than just a ski resort. It’s a true resort in every sense of the word. Non-skiers can escape the dreariness of winter by basking in the sunlight that the wide Engadin Valley receives. Sun worshippers have a choice of sitting on their hotel terraces, walking around the town’s beautiful frozen lake, eating at mountain restaurants, or going cross country skiing on over 150 kilometers of prepared trails - the finest cross country network in Europe, if not the world. There are also boutiques, ice skating, rides on the Glacier Express to Zermatt, horse races, and gastronomy. While we were there, the resort was holding its annual gourmet festival - an event where the town’s top chefs host gourmet chefs from around the world. Hence, guests can experience everything from French food prepared by the finest Michelin rated chefs in France to fusion Asian cuisine prepared by the top chefs from Hong Kong and Tokyo. The food at St. Moritz, which is mainly Italian, is first-class. A simple gnocchi dish at the Piz Nair mountain restaurant proved world-class. Even pizza, eaten at the famous Chesa Veglia house, a structure over 300 years old, was dinner theater at its best.

But skiing was why I traveled to St. Moritz. The resort never let me down in this regard. On our second day, we skied the Corvatsch, Diavolezza, and Lagalb areas. These areas do not have as many modern chair lifts as Corviglia and have more challenging runs. As a consequence, they attract more serious skiers as opposed to the Bogner-clad jet set one often sees at Corviglia. Corviglia is actually loads of fun but the easy, perfectly manicured slopes make even bad skiers look good.

The top of Corvatsch (3,450 m/11,318 f) is accessible by a two-stage tram, which was only half full when we road it. I waited about five minutes after exiting the final tram and then had the pleasure of skiing the Corvatsch glacier alone. On a clear day, one can see the Matterhorn from this famous run. The run is steep but not impossible for an intermediate. However, one does need to ride a pull lift to get back to the tram station. The Corvatsch area has many pull lifts that I suspect will be replaced in the next wave of modernization at the resort. Some of the pull lifts that connect the Surlej with the Furtschellas area are very steep and difficult to ride. Be sure to practice riding one of these contraptions such as the relatively easy lift below the glacier before venturing over to Furtschellas. The one advantage of pull lifts is that they scare away a lot of novice skiers from Corvatsch, giving it a lonely, high Alpine feel - perfect after the glitz and glamour of Corviglia.

In the afternoon, we drove to the third major area of St. Moritz: Diavolezza/Lagalb on the Bernina pass. At St. Moritz, an efficient shuttle bus system makes cars unnecessary, but if your time is limited and you want to ski multiple mountains in one day, a car can be a true time saver. The drive to Diavolezza is pure pleasure. We even saw the Bernina Express making its way up the mountain as we headed up to Bernina pass. Like the Glacier Express, the Bernina Express is a narrow gauge, scenic train ride. The ride from St. Moritz to Tirano, Italy takes you from glaciers to palm trees in only 2.5 hours. The ride from St. Moritz to Zermatt takes over 6 hours and passes the most famous mountains in Switzerland, including the Gotthard massif and the Matterhorn.

Despite 8 Celsius/46 Fahrenheit temperatures and lots of sunlight, the snow both at Diavolezza and Lagalb was perfect, dry powder: hard to believe but true. My wife will back me up on this seemingly outrageous claim. Diavolezza faces north and offers some of the best off-piste in the Alps just below Piz Bernina (4049 m/13,284 f). Unfortunately, the glacier was not stable enough on the day we were there to open the backcountry ski route. Although there is one marked route through this gnarly terrain, one wrong move could put you in a crevasse. Therefore, I recommend that back country skiers hire a mountain guide before venturing out of bounds here or anywhere in the Alps. The red, marked run down Diavolezza was a blast - 883 meters/2,896 feet of fun, steep piste.

As Diavolezza began to get shadowy, we moved to the sunnier, south facing Lagalb across the street. It offers even steeper marked piste and about the same vertical. At both Diavolezza and Lagalb, you ride a single stage tram for each epic run. However, lines on this weekday were short, making these trips bearable.

St. Moritz is one of the most expensive, most luxurious, and most exclusive places I have ever skied. But at this resort, you get your money’s worth on every run. The diversity of terrain at the three areas I skied was un-paralleled: slopes of every pitch and exposure imaginable, huge glaciers, towering peaks, and no long lift lines. When you combine all this with world-class off-slope diversions, you have a recipe for a “Top of the World” experience.

After seeing all this white, I'm starting to think that tree skiing may be a bit overrated. Especially on the blue-bird days you seem to have had on your trip.

I may have to change some of my future trip priorities ...

Sherwood
February 18, 2004
Some of the glacier areas accessible from Diavolezza would be up your ally Johnl. There's a marked ski route there that you can ski without a guide (it was closed when I was there), or you can hire a guide and climb Piz Bernina (13,284) for some real Off-piste fun. I also noticed some very cool off-piste accessible from Lagalb.

The great thing about the Alps is how accessible this kind of terrain can be--just a few meters from a top station or a marked piste. It's tempting not to hire a guide and just go for it, but skiing a glacier is a bit different than say, skiing the Cherry Glades at Timberline. At Timberline, in the worst case scenario, you take your skis off and walk out. If you get stuck in a crevace, you'll need the patrol to pull you out....:)