The Verizon Luge Challenge at Liberty 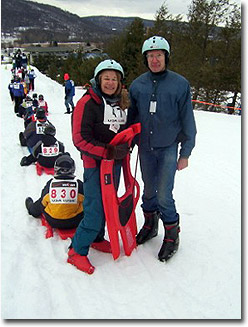 Liberty Mountain Resort was terrific last weekend! Just the type of conditions I like - moderately soft and forgiving snow, cover on most open trails, and comfortable conditions with a bit of wind and cloud. It was great! Manager and President Eric Flynn says Liberty has more snow than at this time last year. And, he explained the fascinating procedure for making moguls. Boy did their expertise show! Lower East Wind, in particular, was a perfectly executed sea of moguls. They were precise in their layout, allowing the good bump sikers (which I am not) to get their stride and have a terrific workout. Eric says it taks about two days to create such a mogul field. All the trails were fine. I especially liked White Lightning, the Heavenly trails, Ultra, and Strata, in additon to Eastwind. On Saturday, 16 trails were open, with an average base of 35 to 45 inches. It can only get better for the next few weeks. This should be helpful for their Spring Festival in early March.

A highlight of the past weekend was the Verizon Luge Challenge. The New York-based telephone company sponsors the U.S. Olympic Sledding and Luge teams. As part of their efforts to promote the sport of luge, they send several members of the Olympic Team around to various ski areas, offering lessons in the luge and a chance to compete. We were very fortunate to have some champion team members at Liberty over the weekend of February 21-22, 2004. Several hundred people took advantage of the free event. Some of the attendees told me that they never even thought of coming to a ski area, until they learned about the luge event. So, the event introduced more people to snow sports in many ways.

For my part, I have long wanted to try the luge and bobsled (I am less certain about the skeleton, which appears to be a face down version of the luge). The luge is usually a one-person sport, with the rider lying on his or her back. Bobsled is conducted with several people.

To enter the competition, each rider is given a plastic version of the luge to use, and they first try it on a shorter course. Helmets and goggles are distributed, and are needed. A face mask would also help - when the luge hits the snow walls on either side of the track, chucks of cold snow pound your face, even though you are lying feet first on your back. The luge is surprisingly easy to control - as least at the slower speeds. I imagine it is much more difficult, and dangerous, when you are hurtling down an icy course at over 50 mph.

After a short test run, you can take the luge onto a longer track. There, for my second run, my timing was 16 seconds, which is pretty good - at least I did not wipe out! Finally, there is the actual competition. For that run, my timing was about 12.5 seconds. This made me about 6th place in my age group. Not great, but I had survived my own personal challenge.

There was a terrific sense of unity on the slopes among all “competitors,” regardless of the age group. The audience on the sidelines cheered us on with American flags and cowbells, provided by the Team. At the end, there was an Olympic-style ceremony - complete with theme song. What a fun event!

We all learned a lot about the sport, which is billed as “the fastest sport on ice.” I am certain that is an accurate slogan. For those interested, the official training headquarters is located at Lake Placid, New York, and Salt Lake City, Utah. The United States Luge Association has a web site filled with information at usaluge.org. Who knows - maybe someone wants me for a Master’s Luge Team?