Ski Denton was a Pennsylvania ski area that received ample amounts of snow each winter — usually over 100 inches annually. Located in northcentral PA, it was a bit hard to get to. Commercial skiing at Ski Denton dated back to the 1950s. The area was first operated by Pennsylvania’s park service. Before closing for downhill skiing in 2014, Ski Denton was still a part of Denton Hill State Park but was operated by a concessionaire.

Due to its remote location, Ski Denton rarely had large crowds, but it did have a wide variety of terrain. Most trails were geared towards beginners and intermediates, but the Avalanche trail, with a 66-degree pitch, was the steepest trail in the area. A gladed trail leading into the Avalanche (and sharing its pitch), The Extreme, was rated a triple black diamond. Beginners could take a pass on that and head to two green trails that winded down the mountain for more than a mile. 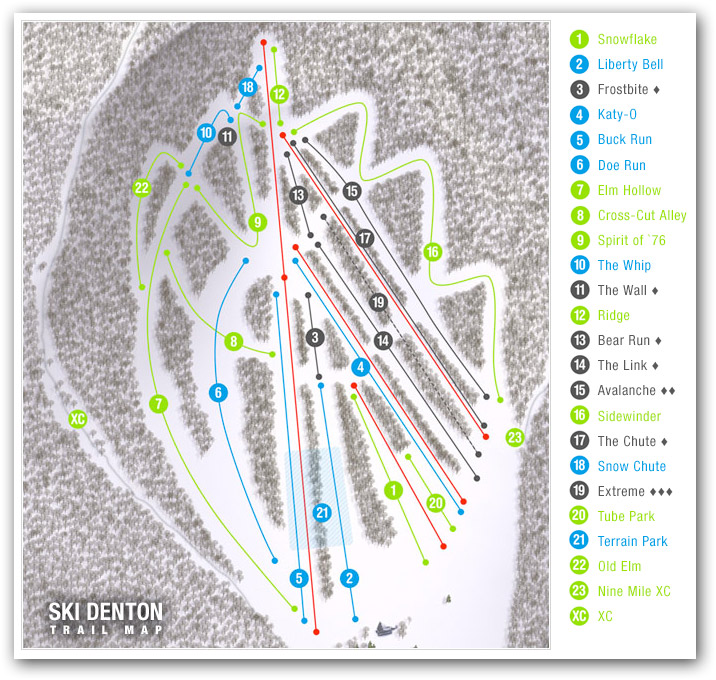 A trail map from Ski Denton.

The vertical drop at Ski Denton was 650 feet, with a base altitude of 1,850 feet and a peak altitude at 2,500 feet. Ski Denton had 22 total trails, including 8 beginner, 7 intermediate, and 7 advanced. Four lifts served 75 skiable acres, including 1 triple, 1 double, and 2 poma lifts. Night skiing was offered on 85% of the terrain, and tubing runs were also available.

The state of Pennsylvania continues to look into options to bring winter activities back to Denton Hill State Park, but as of April 2020, those efforts haven’t born fruit. This September, 2019 article from the Endeavor News provides some updates on efforts to bring back downhill skiing.

Ski Denton was on my radar as a place I want to go due to amount of snow and one killer trail ...then it closed. Sad to see.

We use to go to Ski Denton in the 90's when we had a lot of snow.  Great park and reasonable rates too.  I live an hour away and would love to see down hill skiing at Denton come back.  I'm a volunteer cross country ski instructor for PA DCNR and we teach many adults and kids during our FREE scheduled ski clinics.  The ski trailer has enough poles, boots and skies for 75 adults and kids.  Parents really appreciate our efforts teaching their children.   There's something about being outdoors that draws a crowd.