appskiah
December 21, 2009
Member since 09/16/2006 🔗
88 posts
Drove down to Nelson County, VA Saturday night to ski Wintergreen with some friends. Roads were manageable, but there were a lot of stranded vehicles and trees blocking the roads. Due to a number of circumstances, Wintergreen was our best option and I knew in the back of my head we wouldn't find any good powder. Wintergreen had stated they'd open the Highlands lift, but it never opened, so we were stuck with Big Acorn. All the snow was groomed or covered in dense man-made snow. Sunrise Glades was fun; first time skiing it. awesome glade considering the location. Skied some nice lines. overall a fun, spontaneous trip. i'm bummed i couldn't make it to WV (especially after seeing that pic from chaga), but pretty thrilled to have experienced this storm in any manner. a few pics and video below.... 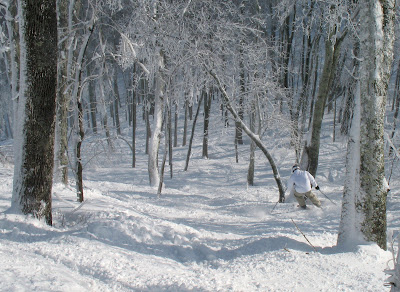 SkiBadger
December 21, 2009
Member since 10/9/2009 🔗
31 posts
Nice update! I'll be heading down to WTG tomorrow morning to ski a couple days. If i'm able, I'll try to post a couple of pics of the conditions, since Wintergreen is falling off the ball with this wonderful opportunity. I know they don't have a webcam, which is fine, but why not post more pics and an official snowfall count? Conditions permitting, they usually post a "pic of the day," but they failed to produce anything while the snow was falling, and only uploaded one photo to their website since sunday morning. Why not upload a series of photos and display the EPIC conditions?!?!?

GRK
December 21, 2009
Member since 12/19/2007 🔗
404 posts
I was up there yesterday and we are going to head up tomorrow (Tuesday) as well as the Highlands are open and we are hoping they will open up still more. Yesterday they were blowing snow on top of the natural, but hey, who can blame them. The last few years they have lost their base in January due to thaws. They should have a good Holiday run this year.

It was funny, later in the evening there were lots of kids trying to poach Acorn but skiing knee-deep stuff from the snow guns wasn't working out too well. All in all a good day, I did not think they groomed upper sunrise as there were plenty of bumps. I enjoyed the glades a couple times as well, and they were open a few days last year.

Wintergreen has never been too up on Web-Cams or photo galleries. Not sure why, but it would be nice. They have some nice shots on their Flickr site but they are not current.
DCSki Sponsor: The Omni Homestead Resort