My new home mountain - view from the opposite side after skinning up:

lbotta - DCSki Supporter
April 17, 2008
Member since 10/18/1999 🔗
1,527 posts
Still skiing at 79 and 75... My heartiest congratulations to them and you too. Parents are the joy of our lives at a point that we grow up enough to realize it. Then we see ourselves through them. Wish you many more years of wonderful experiences with them. Mine are gone as of recently, so the best I can say to you is - enjoy them.

tommo
April 17, 2008
Member since 01/16/2004 🔗
303 posts
That's a good one.... Looks like Beaver Mountain up in Logan but I could be wrong. Beautiful area - Logan Canyon and the whole Bear Lake area are relatively little known and very nice!

Been enjoying it so far!

RobertW - I love the second picture of 7 Springs - very cool!

It's funny how things come around. My Dad has Parkinson's but he is still out there living it and never complains. Now I am shepherding them down the Greens and Blues

Queen: Did I mention that I was green with envy when I saw that pic of you in that deep pow? It must be nice to have that "in your back yard"

Anyway, I may be missing something really obvious, but could someone explain how to embed photographs in a DCSki thread? I was going to post pictures from our trip to the Alps in March, but couldn't figure it out quickly, and kind of forgot about doing so.

And here is the result: 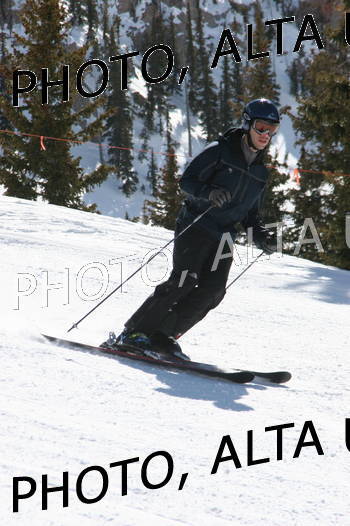 Of course, to do this, you need to have the images hosted somewhere.

We must have done something right, because now my wife (who does not ski) is insisting we return next year. C'est la vie!

I like this shot of my instructor at Park City Mountain

pagamony - DCSki Supporter
April 19, 2008
Member since 02/23/2005 🔗
838 posts
All good. I'll put up something different. This is the monument to the 10th mountain division found in Breckenridge, and there are several around the country. My dad was in company K of the 10th and saw significant action in the Italian mountains. I remember how surprised I was as a teenager when I saw him leading me down the slopes - I didn't know he could ski like that!

Which leads me to my last ski picture of 2008. That's my 13 year taking the lead and pointing the way down Sugarloaf. Two generations later the lead is passing again.

skier219
April 19, 2008
Member since 01/8/2005 🔗
1,318 posts
Dave, I read a couple books about the 10th last year, and there are some amazing stories about those guys -- both during the war and years later in the ski industry. Now that I am more aware of the 10th, I see familiar names all throughout the ski industry. I have the utmost respect for those guys.

Here's to your dad

(of course I'm drinking coffee right now, but that's close -- I can still raise a mug to salute a vet).

BTW, if anyone is interested, I did a report on one of those books here:

It's a good read for the off-season. I think I am going to pick up another couple 10th-mtn books this summer.

pagamony - DCSki Supporter
April 19, 2008
Member since 02/23/2005 🔗
838 posts
Thanks Craig. I'll check that out. I also have the official Army history volume written just after the war with forward by the commander and full rosters, along with some funny troop songs like this one.

And then I climb up to Panorama, and point my skis down from the top.
Yee Goodness! but how I get moving. I tink that I never vould stop.
I vunder my heart is still beating as off of a cornice I schuss.
I bail out in Edith Creek Basin and landed kerplunk on my puss.

I haven't posted in about 8 weeks. I got hurt again in mid February and it sort of bummed me out on skiing for the last part of the season. Doing better now, but motivation to ski is sort of gone. I have been riding my bike almost every day for the past 3 weeks.

skier219
April 22, 2008
Member since 01/8/2005 🔗
1,318 posts
Sorry to hear about that; injuries during the season can be a real bummer. It's actually a relief to get to the post season in some ways -- I can stop worrying about weather and health so much! I even gambled with my knees tonight and ran a few miles...

I haven't posted in about 8 weeks. I got hurt again in mid February and it sort of bummed me out on skiing for the last part of the season. Doing better now, but motivation to ski is sort of gone. I have been riding my bike almost every day for the past 3 weeks.

I know -exactly- how that feels.

I can tell you a good stretching program and massage therapy is WAY under-rated!

I sprained my left ankle skiing in Mid December and then sprained my right ankle learning to snowboard in Mid February.
DCSki Sponsor: Canaan Valley Resort