Tromano or Tucker how much floor space you got out thar in dem hills?

I agree with you, however...

. It's surely been a season for hunting and scratching, snow that is.

UNOWUT someone busted someone on the DCSKI andual survey bout someone posting in faux snowboarder speak i must register my displeasauxer, right here in public nuttin anomenaux with me, with all these foreign languages that's bein spokin here in this thread i cannot understand a word ur posting bc of these forin tungs. 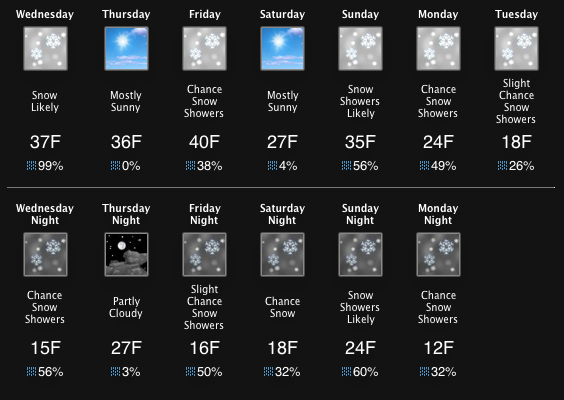 They were reporting heavy snow an hour ago.

...yes, I'm not complaining even here in KC. The winter line cuts right across the center of Missouri. St. Louis has been comparatively mild and rainy, and we have been mucho frio esta invierno. I was reading an article that said the only places that typically see a mild winter during La Nina is the east coast and Europe. Not sure if that's true every year, but it at least seems so this year... it sure ain't been warm in China.

2 years of Spanish a long time ago and I can't remember much if any....

Wow, it must be pretty warm there. Nothing but white stuff here all day. It looks like it will even get a little chilly tonight too..

Cloudy with scattered flurries. Lows around 17. West winds 5 to 10 mph.

Jimmy, good question. How 'bout posting it as a separate, more visible, thread?