Hey all, was a fairly long time reader and poster but lost my account so, starting a new here with a question around the avalanche lift.

I walked up the hill and noticed the avalanche lift towers are slanted downhill.

Maybe they had to do this to keep the number of towers down and to allow for a sharp incline up?

I was thinking I would expect a big beefy base several times wider than the steel poles themselves but after walking up to one, the concrete is barely wider than the pole itself.

I feel like with wind and riders, this will cause a significant stress to the sides of this base causing the bolts to eventually explode from the sides bring down the tower onto the lift riders. Time will eventually cause a catastrophic failure.  The only way it would be safe would be if the concrete goes six feet deep and the bolts almost as much I would imagine.

I'm by no means a mechanical or structural engineer but this seems very sketchy to me.

I have been to a good number of different places skiing and have never seen a lift tower sloping sharply downhill.

Am I the only one that is frightened by the notion that this was setup like this? 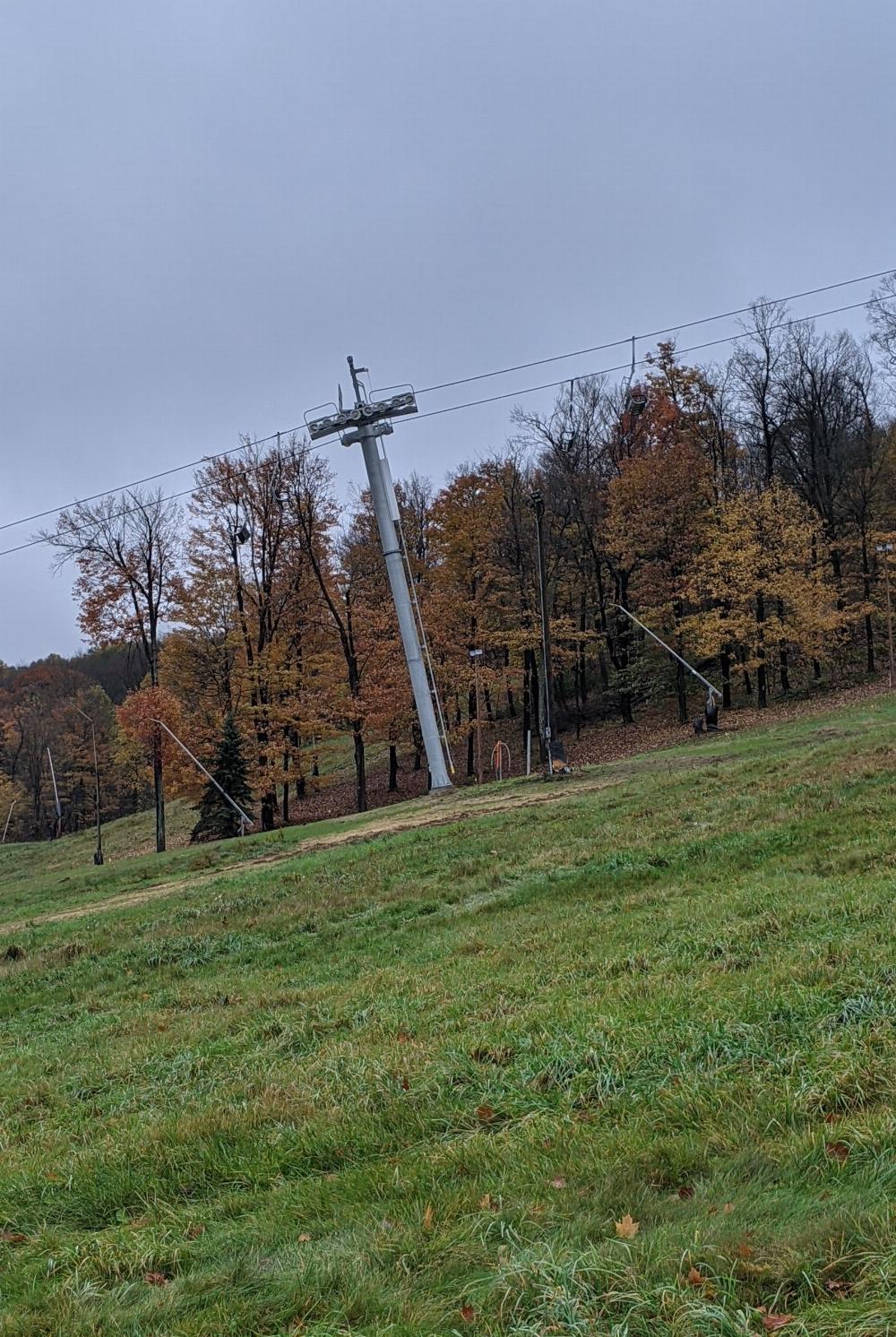 This is not unusual, and a large amount of engineering goes into lift design and tower placement, including tower angles.  Doppelmayr employs engineers to look at many variables including topography, soil density, slope angles, etc.  Nothing is left to chance in their moment/load calculations.  Modern fixed grip lifts are engineered for a 40+ year lifespan in harsh conditions (assuming proper maintenance, etc.)

In the photo you included, you'll note that the lift cables are running perpendicular to the tower on both sides -- that's probably quite intentional (tension from cables factors into the engineering load calculations).  If the tower was photographed from a different perspective, the angle wouldn't be as noticeable -- the composition in this photo just happens to highlight the angle perfectly.  Those concrete footers undoubtedly go pretty deep into the ground, too.

I would have no concerns whatsoever with the geometry of that tower, knowing the engineering that goes into chairlift design.  But yes, seeing a large tower coming out of the ground at an angle might look a little off (especially with no snow on the ground :)), but if you start looking at other chairlifts closely (especially at areas out west with complex terrain for a lift to make its way through), you'll see similar towers.

Here's a web page that talks a bit about different techniques for tower placement.

Grumpy dad
6 months ago
Member since 11/7/2021 🔗
23 posts
Thanks.  Very reassuring this is all factored in and isn't a mistake.  I'm still going to avoid being the first one getting on it, however wow is it an improvement to that area.  The added safety bar alone is worth it

Crush
6 months ago
Member since 03/21/2004 🔗
1,082 posts
you generally want the tower to be as near in pure compression with no side load vector or you would get Euler column buckling. That is why you don't need a big pad, most of the load is directed along the column in a vector that is normal to the cable which essentially is equal to the slope angle.

I'm still slightly skeptical.  History has shown that gravity wins when mistakes are made.  Or say there is a requirement for 7s to keep line slack to a certain measure or never load the first riders chair after chair until the first riders are halfway up, those requirements quickly get lost and them design specs are exceeded.

I don't really know what could to wrong sonny examples are likely poor examples.  All I see is a pole leaning downhill and my tiny brain can't get past it. :). I'm sure I'll ride and forget about it.

The most recent failures I know of similar to your concern were a chairlift entire top bullwheel pulling up out of the ground during the summer, and a 2008 tower failure from being filled with water via a leak or clogged drain and subsequently freezing.

liftblog.com the Elk Mountain F lift seems way more unbalanced to me than this.

superguy
5 months ago
Member since 03/8/2018 🔗
353 posts
Doppelmayr has been in the lift business for a very long time. I'd trust there designs without hesitation.

Doppelmayr has been in the lift business for a very long time. I'd trust there designs without hesitation.

And ... their Austrian! Enough said!

True that! And they also acquired great Swiss tech when they acquired Garaventa about 20 years ago or so.

With the best of Doppelmayr, CTEC, and Garaventa tech, I'd say they're pretty much tops in the biz.

Doppelmayr has been in the lift business for a very long time. I'd trust there designs without hesitation.

And ... their Austrian! Enough said!

Sorry to be the one who everyone hates online, but I got a chuckle out of two different mistakes using their/there/they're in a post and reply. I think I must be really itching to get out on the trails and do some skiing if I'm worried about that stuff. :)