With it being a huge skiing weekend I figured I’d start a thread where everyone can share the places they went and how it was?

I went to TM this weekend and they were getting dumped on with snow (about 8 inches). The snow was fantastic! There was basically no ice and conditions were great. I wish they would open all their trails but they must be only days away. Can’t wait to get back!

What about you all?

Lines at TL on Monday were not bad. I don't think we ever waited more than 5 minutes or so, even with people not fully loading the chairs due to Covid precautions. I think the new RFID system is really helping.

Parking was fine as well. We got there at 8:40 and were able to get a spot in the smaller lot near the lodge.

How were the lines?  Our whole house is laid up with muscle / joint injuries (better that than Covid), so we didn’t make it out.

I'm the guy who posted a question on the forum about Elk or Timberline a few days ago and, based on the amount open on the two mountains, went to Elk on Sunday for the first time with two of my kids (a 17-year-old boy who is an amazing snowboarder and a 13-year-old girl who is an advanced skier -- I'm 51, took up skiing 10 years ago, and can ski easy blacks but prefer the blues).

The drive from Baltimore was an easy drive (mostly on I-83 to I-81) -- we drove up on Saturday night and stayed in the Hampton Inn in Clarks Summit, PA (it was clean and reasonably priced (about $109 with free breakfast).  It seemed as if the hotel took COVID precautions seriously.  The ride to the hotel was about 3 hours and 10 minutes with a stop and from the hotel to the mountain was about 25 minutes.

Rising early (for us), we arrived at the mountain by 8:40 am.  I've read complaints about the jitney ride from the parking lot to the mountain, but we did not find that an issue at all.  There was no line at the ticket window and throughout, I found the staff at the mountain competent and friendly.  I also saw plenty of ski patrol on the mountain, which was good to see.

There was some light snow the night of our arrival and throughout the day and the conditions were excellent.  There was never a wait at a lift line, and although others have complained about slow lifts, having skied in Vermont, the fact that the lifts were not high speed did not bother me (it gave me a little time to rest and the ride was just a few minutes anyway).  With all the spruce trees planted on the mountain by the owners, it was very pretty and the view from the top of the snow-covered surroundings did remind me somewhat of being in Vermont.  No, it's not Vermont, but I can see why Elk advertises itself as the closest thing to Vermont skiing in Pennsylvania.  Many of the trails we skied did remind me of trails at Bolton Valley, for example.

The grooming and snow coverage was great (25 of 27 trails were opened -- one -- Lehigh, is supposed to be a great green but is only open when there's enough natural snow) and my skis only hit ice a few times all day (Seneca, which is a black diamond mogul run under the lifts, looked pretty icy, but people were getting down it -- including my kids, who are much more courageous than I am).  There are some fun blues on the mountain, especially Delaware, which goes from the top of the mountain to the base lodge.  The blues are mostly pretty wide, surrounded by trees, and not crowded.  In fact, when I went down Delaware on my last run at 3 pm, I only saw one other skier.  I've skied Whitetail, Liberty, Round Top, Montage, and Camelback in the Mid-Atlantic and that's hardly ever happened before.  But often at Elk, I'd see just a few other people when I was on a run and this was on MLK weekend.  Mahican, Schuylkill (both nice blues from the top) and the other runs were also in fine shape throughout the day.  Even in the afternoon, there was plenty of snow on Susquehanna, which is a pretty wide black with a moderate pitch from the top.

Compared to the other Mid-Atlantic mountains I've visited, there seemed to be a greater percentage of skiers than boarders.  I also noticed, that, even on the greens, it seemed that everyone knew how to ski or board.  Perhaps that is because for beginners, there is a nice bunny hill area as well as a chair that takes beginners about midway up the mountain to East Slope and West Slope, where most of the blacks and blues run off into as well -- those slopes are pretty wide and were also in good condition all day.  There is also a green from the top of the mountain to the bottom -- Tecumsah -- off of which there are blues and blacks, but a beginner can take a green all the way down, make some turns, and, at times, ski at a decent pitch.  .

The people working at Elk were great.  The liftees I saw were adults who knew what they were doing (no chairs crashed into my back) and I appreciate that.  The lodge was clean and there were people inside when we had questions (such as about use of a locker) who were happy to help.  It really is a well-run operation.

I also thought the prices were reasonable for lift tickets and like that they give a youth ticket for age 14.  So for my three people, our total lift ticket cost for all day was $205 -- that's a great deal in my opinion and particularly compared to Liberty/Roundtop/Elk.

I've added two photos -- one is looking up at the East and West Slope and the other is at the top of Susquehanna.  I highly recommend Elk -- the drive is definitely worth it in my opinion and I will be back again.

Looking up from Base Lodge at East and West Slopes. 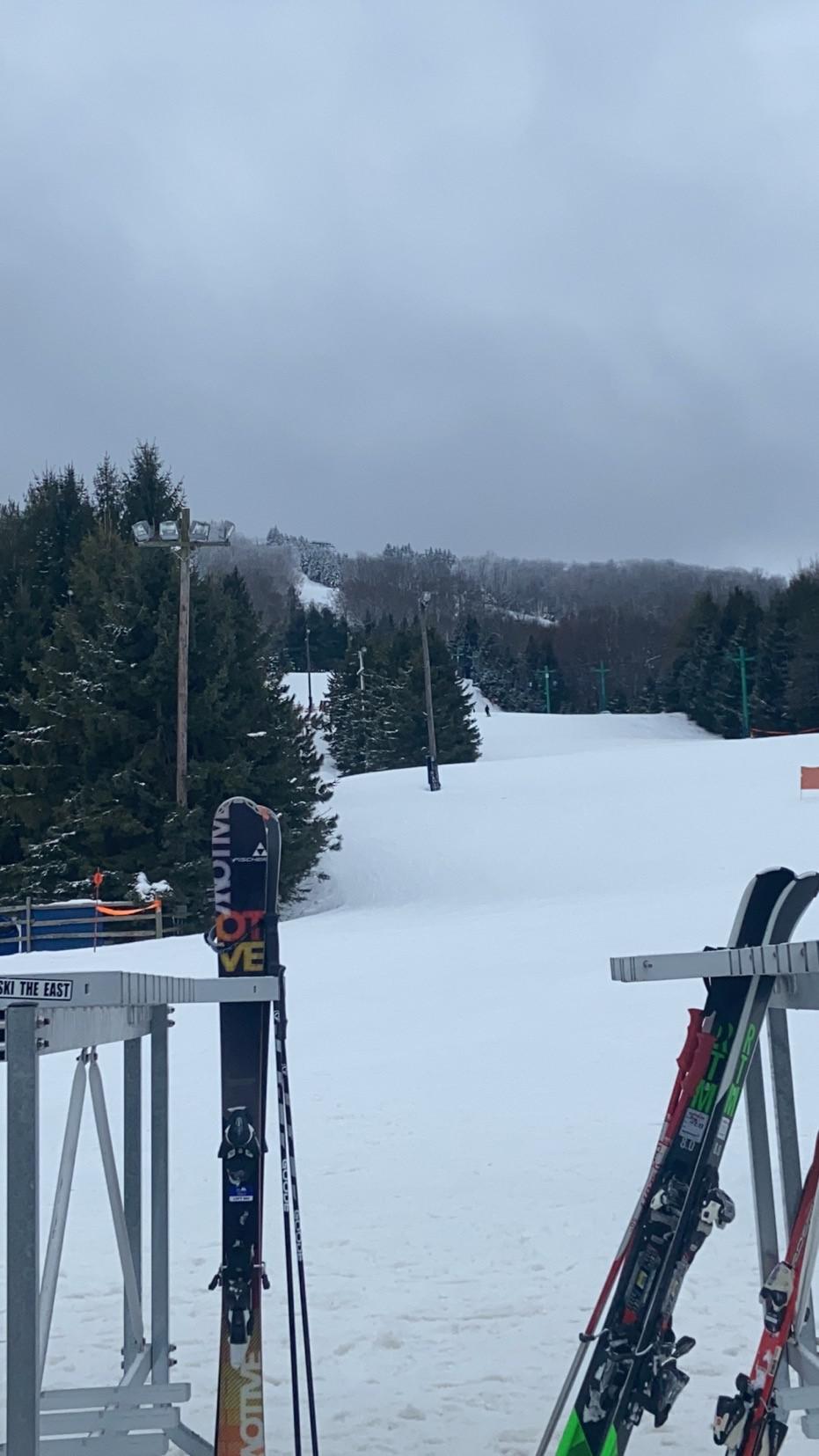 The view from the top of Seneca. 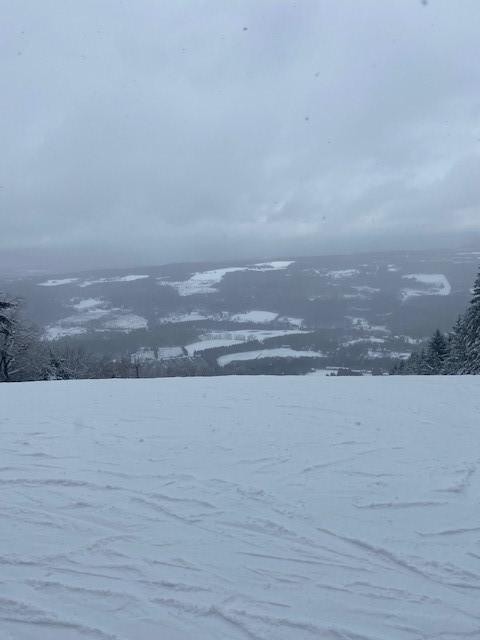 @BaltoBill - sounds a lot like the day I had at Elk conditions-wise on 1/18/2020. You had more trails open though. I really enjoyed reading your report.

Compared to the other Mid-Atlantic mountains I've visited, there seemed to be a greater percentage of skiers than boarders.  I also noticed, that, even on the greens, it seemed that everyone knew how to ski or board.

The people working at Elk were great.  The liftees I saw were adults who knew what they were doing (no chairs crashed into my back) and I appreciate that.  The lodge was clean and there were people inside when we had questions (such as about use of a locker) who were happy to help.  It really is a well-run operation

These are all reasons I want to go back next year (fingers crossed), despite requiring an overnight stay. It's only about $55 along a lot of the I-81 corridor. I think it's going to be the go-to for me and that friend from the Harrisburg/Hershey area when we ski together. When my oldest gets a little better, I think it's a certainty.

I wonder how Elk figured out how to make it work as an independent where Blue Knob, for example, has not.

Also, I wonder if Big Boulder has captured a lot of the snowboard market in Northeast Pennsylvania. In 2018, I didn't see a lot of snowboarders at Camelback either.

Had a great long weekend at Massanutten.  For long time season passholders, probably one of the best in a decade because there were far fewer people and very good snow conditions, although still limited terrain.  The bases for Showtime, DJ, Southern Comfort are quite deep.  Geronimo is holding up as well.

Massanutten clearly limited the number of tickets, which are only available online.  They were sold out for Sat about at least a week before.  Sun and Mon sold out as well.  The only time the base lifts had long lines was for about an hour midday.  Usually that lasts 2-3 hours during Sat-Sun of holiday weekends.

Upper Showtime has been in great shape all weekend.  DJ has been very good first thing in the morning.  Got a slick by the afternoons.  With fewer people today, Jan. 19, both stayed very good.  Especially since it was a little warmer so the icy sections softened by the afternoon.

There are more tables and chairs outdoors around the lodge on the ground level and on the porch.  Inside tables are for use by people who buy food or beverages.  They moved the owner's area up to the top floor, which has been very nice since that include bigger restrooms than the middle floor.  The locker room has free cubbies for shoes and electronic paid lockers.  Most people were either renting gear or booting up in the parking lot.  But the shoe cubbies were pretty full on Sat.

The rental area expanded to include the building normally used for the Children's Ski School programs.

Lift lines are longer when busy and have ghost lanes to keep the lines separated.  The base lifts run smoother than usual since the lifties only need to alternate lines and don't have to combine people to fill chairs.  Plus I think there are fewer pure beginners who don't know how lift lines work.

Even when it was still cold enough during the morning to keep snow guns to continue building base for Mass Transit, all the other snow guns were off.