Many skiers have a little mountain they are fond of, and I’m no exception to that rule. I learned to ski at Titus Mountain. Just 25 minutes from my parent’s house, it was the only place to be for a kid growing up in the rural northern Adirondack Park of New York. I remember looking down the bunny hill in sheer terror, thinking, “How am I going to survive?”

Set on revisiting my old stomping grounds, my friend Steve and I left Frederick, MD, around 9 am stopping only for gas, Gatorade, and to visit Steve’s family near Newburgh, NY, just south of Albany. North of Albany, I-87 becomes the scenic “Adirondack Northway” ending at Canada. We wouldn’t head that far north on this trip, however, and left the Northway near Elizabethtown, continuing through the snowy Adirondack roads.

In the heart of the High Peaks region, we stop at the Noonmark Diner in Keene Valley, NY, to enjoy a home cooked meal and chat with some of the locals bellied up to the bar. Further north, we’re greeted by a panoramic view of Whiteface Mountain, home of the 1932 and 1980 Olympics. Stretching far above the surrounding land, the skyscraper’s rock slides and scars practically demand you capture it on film. It dominates the tree line as we drive through downtown Lake Place, and fifteen minutes later we find ourselves in Saranac Lake. Our attention is immediately drawn to the Ice Castle, a traditional highlight of the town’s Winter Carnival since 1898. Locals will tell you the Castle was originally created as a home for Sara the Snowy Owl, Saranac Lake’s official mascot. Though still unfinished at the time of our passing, people and cars jam the streets, gathering in awe of the fixture, built from three-feet-thick, half-ton blocks of ice cut from the adjacent Lake Flower.

Around 5:30 pm, we arrive on the northern side of the Adirondack Park. Titus is one of the rare upstate mountains that offers night skiing, and a large portion of the trails are already aglow. Eleven trails are fully lit, served by two main lifts. A little more than eight hours after we left home, we grab our gear and head off to find our tickets.

As we approach the mountain, the first things we notice are the kids. The terrain park is a zoo of youngsters sliding down rails and flying over jumps. In the tubing area, crowds of kids are zinging down the park’s new dual lanes. On the mountain, they’re armed with helmets and courage, flinging themselves perilously off near vertical walls of packed snow and landing wherever gravity cares to toss them. If it were me landing flat on my spine at those speeds I’d be done for the night, but these children are indestructible.

The night is a winter wonderland, with lightly falling snow typical of Titus. The mercury lingers around 20 degrees - perhaps a bit chilly by Maryland standards, but right in the zone for the folks skiing at the mountain. What Titus lacks in steep hills, it more than makes up for in snow quality. In the three weeks prior to our visit, Titus saw snowfall almost every day, treating us to plenty of packed powder for our nighttime trek down the trails.

The machine-groomed surfaces are the exact opposite of packed ice; the snow is fast and loose, allowing you to keep an edge and ski effortlessly down the mountain. Mother Nature gets help from a cloud that routinely drops a little fresh powder on the middle sections of the trails. On some of the steeper trails, like Rock Garden and Whistler, we find the occasional ankle and knee-deep powder pockets in ungroomed surfaces.

The trails on Titus create the illusion of skiing through the woods rather than on parallel trails all ending at the same destination. In fact, the main lower mountain features three distinct fall lines ending in three separate places. You can ski most of the mountain’s 27 runs in a single day, and because of the many distinct areas, the trails stay interesting and add to the feeling of being on a much larger mountain. An under-road tunnel takes you to the “new” mountain, and a wilder ride can be found on a large section on the face with fairly large bumps in a 50-yard run.

At the end of the night, we head to my parent’s house 30 minutes away, satisfied we’ve skied the best Titus has to offer. Of course, if you don’t have family just miles away, the area offers numerous lodging options, from cabins to B&B’s to modern hotels, to choose from. In fact, Titus itself offers most of the amenities (except on-site lodging) of the larger resorts but is still cozy enough to drop off the kids and not worry about them.

So what exactly are you looking at when you head to Titus? There are three mountains with 27 runs and eight lifts. Eleven trails and two snow-tubing runs are lit for nighttime fun, and the mountain’s longest run is 3.5 miles. One notable trail, called “Long Way Home,” seems to go on forever and has just the right slope so you never have to work, but with a little drop at the very end, giving just a little challenge to the beginner.

In comparison to the popular DC/Baltimore area ski hills of Wisp and Liberty Mountain, Titus is physically just a bit larger. It boasts a vertical drop of 1,200 feet, 150-inches of snow, and a season that generally lasts more than 125 days. Titus is also 500 miles north of the DC area, which lengthens its winter. Liberty features a 620-foot vertical drop, while Wisp has a vertical of 700 feet.

Titus is an out of the way and often overlooked ski destination with all the amenities of a large mountain, without the added hassle and expense. Reasonably priced, two-hour flights can be found heading into the Burlington, Vermont (3 hours) and the smaller Massena, NY (45 min) airports. The interstate will take you nine hours, but is promised to be filled with scenery. The surrounding areas, such as Lake Placid, Montreal and Ottawa, have much to offer the traveler who wants to explore more than just the slopes.

While Titus may have many similarities to the DC/Baltimore mountains, going the extra mile(s) is more than worth it. There are times I can remember skiing Titus into mid-May, so if it’s an extended ski season you are searching for, just head north!

Additional photos from Titus are available in this Facebook Photo Album. 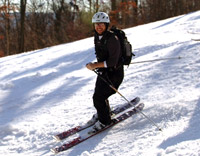 Michael French, an Adirondack native, has been skiing for more than 22 years, primarily at Whiteface in Wilmington, NY and Jay Peak in Vermont. In addition to developing a video production company (CherryBlossom-Media.com), French freelances as a broadcast news photographer in Washington DC and Baltimore. In 2005, French rode the equivalent of a cross-country trip on bike, camping for more than 80 days and riding various sections of North America, from Maine to Ottawa, Wyoming to Alberta, and down the coast from British Columbia to Oregon.

robbieA
March 20, 2009
Looks like a nice off the radar place! good read

John
March 22, 2009
The edifice made of ice in Saranac Lake is not a castle - it is the Ice Palace. Sorry if that seems nitpicky, but these types of errors can perpetuate.

Michael French
March 22, 2009
That IS rather nitpicky. Sure, "palace" helps define it as a place for royalty- which is true, Saranac Lake's Winter Carnival has yearly royalty.

Exhibit A: Photos. Decide for yourself if these are castle-like structures that royalty would inhabit. http://saranaclakewintercarnival.com/robgrant/photogallery.html

As a native and one-time local of Saranac Lake, and as one who has personal photos of at least 15 of these structures, and as someone who helped build 3 separate castles- I can tell you firsthand that we all call it a "castle" whether that's official or not. Even the main architect calls it a castle. And a glance at Saranac Lake's website shows the use of palace and castle as interchangeable.

Ann
April 1, 2009
I haven't skiied in a while but would love to get back up there after reading your article. I love Titus Mt. I used to love the night skiing. Brings back lots of good memories. Thanks