For the past 38 years, Vermont’s Killington Ski Resort has been the first ski area to open for the season. A dip in temperatures the past week has allowed Sugarbush ski resort to initiate snowmaking operations, potentially threatening Killington’s long-standing title.

According to Killington Managing Director Allen Wilson, though, Killington has “no plans” of giving up their title. Last year, Killington opened on October 4th and didn’t close until June 22nd.

“Opening” is a relative term. Many view Killington’s rush to open first as a marketing ploy, which is exactly what it is. For example, last year, Killington did open a portion of one trail on October 4th, but it closed almost immediately afterwards. The resort didn’t re-open until later during the month 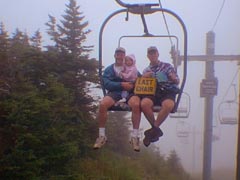 Nonetheless, Killington’s impressive and aggressive snowmaking allows them to boast one of the longest ski seasons in North America. Conditions stay good well into the spring and Killington receives plenty of natural snowfall to help out. Last year, over 300” of natural snow fell on the resort. Most Colorado ski resorts receive an average annual snowfall of 300-350”.

In the very competitive ski industry, ski resorts find they have to offer significant new features each year to vie for skier and snowboarder visits. Last year, Killington added six new lifts, five new trails, and a new family center. Over the next two years, Killington will be spending $50 million to enhance the resort.

Killington’s ambitious plans will undoubtedly preserve their reputation as the most popular New England ski resort.

And Killington’s ski season might start any week now, as soon as they can get some white stuff to come out of their snow guns. But don’t pack your ski boots just yet - the “real” season is probably at least a month away.