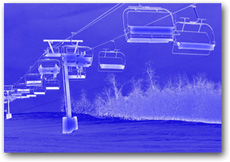 This is the time of the year when the thoughts of many skiers and boarders turn to their next-big-ski vacation. When planning ski trips outside the local area I am invariably drawn to ski resorts with large aerial lifts, such as gondolas, trams or cable cars. The bigger the lift, the better, is my mantra.

The kind of lifts that interest me the most are a mile or more in length and ascend at least two or three thousand vertical feet. I’m not alone in my fondness for these. Many larger US resorts feature such “signature” lifts in their brochures, websites, and publicity info. The main attraction with individual ski lifts that deliver a big vertical is the liberating opportunity to descend a significant chunk of mountainside in one fell swoop. Accompanying this is the feeling that you’re spending a lot more action-time on the slopes, rather than down-time in lines and lifts. The feeling is rare for most Mid-Atlantic skiers and boarders.

My personal concept of a major ski lift takes three forms: aerial trams, gondolas, and detachable high-speed chairlifts. How they are defined is a matter of interpretation. Some of the variations exceed my knowledge base. The largest and least common, trams and cable cars, are, in my view, essentially the same train-car like aerial conveyance. They typically hold 40 to 120 passengers, but with only two cars strung to an uphill wire or cable.

Gondolas are smaller, enclosed cabins built to contain approximately four to 12 passengers. Dozens of gondola cabins are attached to a single cable and the newer versions tend to have larger individual cabins, sometimes heated.

Detachable high-speed chairlifts are undeniably the third form of major ski lift in the US. They are less common in Europe, but we hyperactive Americans prize their efficiency. They sometimes cover verticals approaching those of trams and gondolas and have a much higher rate of uphill transport, but they don’t provide the same out-of-the-elements comfort factor as enclosed trams and gondolas. They can generate their own wind-chill factor.

Aerial trams generally deliver the maximum goods in the way of opening up lots of terrain with long runs and big vertical drops. Since only two cars usually run on a tram cable - one goes up, while the other goes down - this is not an efficient uphill transport method. They can get a might cozy when they’re packed like sardine cans for maximum capacity.

Trams, however, are the lift of choice over extremely steep, rugged, and/or expansive terrain. This is why there are so many of them in the precipitous and oversized geography of the Alps. Their wires can be strung on just a handful of huge towers separated by large distances. This often means occupants are treated to great views from ten or twenty times the distance off the ground of a typical chairlift. Their spectacular scenic value appeals to year round tourists.

The most scenic US aerial tram I’ve been on was at Snowbird, UT (125 passenger/3100’ approx vertical). This newly overhauled lift is frequently crowded during ski season. It rises high over some awesome, extreme terrain. The terminus places you on a small white knob at 11,000 feet on a summit they call Hidden Peak. There is no comfortable way down from here for low intermediates, but there is some eye-popping scenery and great snow for advanced and expert skiers/boarders.

While it’s not quite in the same category, a few years ago I found the new Cannon Mountain, NH tram (70 passenger/2100’ approx vertical) a great and somewhat exotic ride for the northeastern US. The first leg of the Cannon tram goes over a rather significant rock precipice. While approaching the precipice it was reassuring to glance hundreds of feet down at the New England Ski Museum near the base station. Positioned outside the museum was the antiquated, but fully intact car from the original 1930’s era Cannon tram. It looks like something from Captain Nemo and 20,000 Leagues Under the Sea, but it was tangible evidence of an enduring safety record!

The tram at Jay Peak, VT (60 passenger/2100’ vertical approx) was the one that got away from me. My one and only visit to Jay Peak, which is somewhat remotely located near the Canadian border, was on a typical February weekday in 1989. I was disappointed to find the tram down due to high winds. The wind was slight in my opinion. There was a very small crowd that day and I suspected a different factor might have been the real cause for the shutdown, a cost saving measure by management. Without the tram, the top 25% of the area is inaccessible. When it’s full-up, Jay is worth a day or two visit if you’re in the area. It’s one of the last tall peaks in the Green Mountains before things tend to flatten out in southern Quebec.

I believe there are only about ten aerial trams/cable cars in the US. I have no experience with a number of the most noteworthy examples, but can pass on the following second hand info. Heavenly Valley, CA has an old tram (50 passenger/2000’ approx vertical) affording magnificent views of Lake Tahoe. Nearby Squaw Valley, CA also has one (115 passenger/2000’ approx vertical), for possibly the closest tram tandem in the country. Jackson Hole, WY has the granddaddy of US aerial trams (60 passenger/4100’ approx vertical). It very likely holds the distinction of serving the most skiable terrain of any single lift in the US. A new and specially ruggedized tram has been opened at Big Sky, MT (15 passenger/4000’ approx vertical) in the last couple of years. The ride is supposed to be amazing. Much of the terrain it serves is treeless, extreme, and subject to severe winds and harsh weather.

The only European aerial tram/cable car I’ve been on is the one near Garmisch-Partenkirchen ascending the Zugspitz, Germany’s highest peak at 9,700’. This ride took place years ago and was far hairier than any aerial lift I’ve tried in the US. My guess is that it had a vertical rise of about 5000 feet. The beautiful Bavarian summertime view I enjoyed was much like what you’d get from a jet airliner.

While the car was docking at the summit terminal, the thought crossed my mind that if it ever broke loose from the cable it would drop about 500 feet straight down, hit the side of the cliff and not stop rolling until it came to rest in a beautiful blue lake a couple of miles below! On the return trip, just for variety, my wife and I rode back down on a cogwheel train through a tunnel inside the mountain. This covered the same huge vertical and, I suppose, offered a bad weather alternative for access to the upper slopes. A similar ski train got stuck and burned for days in a tunnel at Kaprun, Austria in the Fall of 2000, causing over 150 deaths in one of the greatest tragedies in skiing history. Nobody said we snow sports enthusiasts weren’t risk takers. Awesome aerial lifts and various other major modes of uphill transportation with incredible scenery are a dime a dozen in the Alpine region of Europe.

Brewmeister Smith
December 7, 2001
It's probably worth noting that the Cannon tram was the first in the country.

Trams that have nothing to do with skiing fascinate me, also. I know of some - the Roosevelt Island tram in New York (http://www.roosevelt-island.ny.us/transportation.html), and one at Masada in Israel come to mind right now. Who knows of any others?

Chad
December 7, 2001
Great article, Jim! Last February in a three day span i was able to hit Snowbird, Jackson Hole, and Big Sky. We made at least one tram ride at each resort. The first two offer access to incredible terrain (Snowbird) and ridiculous vertical (Jackson). But the real standout here is the tram at Big Sky.

This was my third trip to Big Sky, and the first two times the Lone Peak summit tram was not open. Snow cover was thin and winds were very high. But this last year we finally got on. And what a ride it is. This tram only makes the top thousand or so of vertical on the peak. It has no support poles of any kind. You fly out of the base station straight to the summit.

Lone Peak is aptly named. It is the dominant peak in the area. The day it was sunny but the wind was hammering the summit. We skied the endless open back-side bowl on crusty wind-hammered snow pack. This was the closest I have ever felt to being in extreme high-altitude conditions. At the base the powder was incredible.

As we rode up we saw several skiers coming down the "Big Couloir" run. This narrow slot is easily the sickest drop i have seen in person anywhere.

Dan Howe
December 7, 2001
Does any one think that 7 springs will be open on 12/27/01 because i am going there. i really mean does anyone know if the whole north & front face will be open by then. please post it here thanks alot

JimK
December 9, 2001
Chad, you might be able to package that February thing you did as a "Best Tram Rides In America" tour. You must have put a few miles on your car in those 3 days! I thought the Big Sky tram went all 4000 vert from base to summit?

The Howe's might want to stay glued to www.7springs.com
I just looked at their webcam and it is all green up there, nothing open yet. They are one of the best in the region for snowmaking. They can probably get 2/3 or more of their terrain open in one good week of cold. If anybody is going to have snow over the Holidays, they will. If they are flexible about moving your visit to say, MLK weekend, you might think about that for extra insurance for lots of ski terrain? But wait as long as you can before switching in case we get that good cold snap.

Chad
December 9, 2001
The trams at Jackson and Snowbird go from base to summit. The Lone Peak tram at Big Sky only rises the last 1000 feet to the summit. It starts at the top of the giant cirque of Lone Peak and flies straight up the cliffs to the summit.

We did all our skiing in the day, driving in the evenings. It really wasnt too bad. The last drive from Big Sky back to Salt Lake is a little long though.

John Sherwood
December 11, 2001
Does anyone know why Europeans favor trams and gondolas whereas Americans tend to prefer quadzillas?

Perhaps Jim will address this vexing issue in his next article. I enjoyed this one. Keep up the GREAT work.

Please answer me to my personal email: superswimmingfish@yahoo.com.