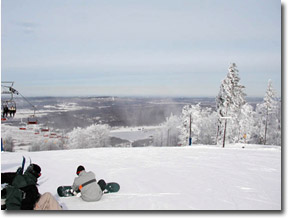 Timberline, with a base elevation of 3,268, boasts some of the coldest weather in the region. When I awoke on Saturday, the thermometer outside of my condo read 10 degrees. It never got much above 22 degrees Fahrenheit the entire day. This cold weather made for some excellent ski conditions despite rains earlier in the week.

The resort opened 5 trails out of 35 trails with Upper White Lightning, an expert trail, being the only way down from the summit. Upper White Lightning is one of my favorite cruising and carving trails on the mountain. It’s reasonably wide and maintains a decent pitch from top to bottom as it rolls down the fall line of Herz Mountain. The resort reported a frozen granular surface, but blowing snow from snow guns transformed most of its open terrain into packed powder. A skier covers 1,000 feet of vertical from the top to bottom of Timberline, so each trail skis big. I took seven runs on White Lightning and did not get bored. It gave me an opportunity to work on my style and enjoy a great day in the mountains with very few other skiers.

Either because of the predicted snow or limited trail offerings, few people decided to ski Timberline this weekend even though adult day tickets were only $27 and half day tickets, $22. The place was a ghost town. I asked one of my neighbors where his son was today. He told me that the family had just returned from Vail, which spoiled his son and made him reluctant to travel to Timberline “just to ski one trail.”

At the season pass desk, I spoke to another neighbor who boasted about what a fabulous time he had on Friday at Snowshoe. He asked me how Snowshoe could be opening much of their terrain while Timberline only offered 14 percent. “I read on DCSki that Timberline was improving its snowmaking for 2003, what gives?”

The reason Timberline is always slower in opening terrain than its competitors has to do with how it makes snow. Rather than laying a minimum base on each trail so as to get a lot of terrain open quickly, it painstakingly blows 60 inches of snow on each trail before opening it. That allows the terrain to survive rains and thaws without needing constant re-coatings. This weekend a case-in-point was White Lightning. Despite rains that melted 13 inches of natural snow in the Canaan Valley, White Lightning still had a 30-40 inch base on Saturday. Natural precipitation will provide all the extra snow necessary for the trail to be skied until the beginning of April without any additional snowmaking. In short, Timberline’s methodology allows this privately owned ski resort to make snow at a lower labor costs than resorts that open vast amounts of less well-covered terrain more quickly.

Unfortunately for the resort, the expectations of the Mid-Atlantic skier are changing. Resorts such as Snowshoe and Seven Springs have raised the bar and skiers want the smaller resorts to catch up quickly. Skiers now expect that resorts open 100 percent of their terrain by the end of December. Increasingly, they also expect high-speed, detachable lifts to allow them to experience more of that terrain, more quickly. Although it offers some of the best trails and most vertical in the region, Timberline has been slow to react to these fundamental attitude changes, and as a result, skiers are voting with their feet and going elsewhere. 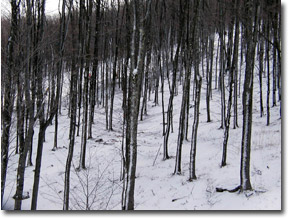 Last year, the resort suffered a decline in skier visits despite record snowfalls while nearby Snowshoe experienced a record season. To try and woo skiers back, the resort promised to upgrade the Silver Queen lift, build new gladed terrain, and improve snowmaking. Sadly, the resort is not living up very well to any of these promises. Because of a supplier delay, the Silver Queen has yet to be upgraded to a triple. New gladed terrain has been hacked out of the woods below the pump house, but stumps and rocks left on the new trail mean that it will need a lot of natural snow before it will be skiable. Finally, Timberline now offers snowmaking on almost every trail, but overall output remains low. The resort still does not appear to have the capacity to make snow on more than 2-3 top-to-bottom trails at a time.

Personally, I am content with the current situation and very happy to ski one good trail for an entire weekend. Quoting Warren Miller, “the best ski resort is the one you are at right now; there’s snow on the ground and the lifts are running.” My condo is not in a formal rental program and I go up to Timberline to get away from it all and enjoy the rustic nature of the place. However, I do sympathize with some of the property owners on the mountain. Many homes in the area now sell for as much as $650,000 and a .354 acre unfinished plot of slopeside land can cost $350,000. People investing that much money in the mountain deserve improved service. As Timberline sells more land plots for more and more money, I hope it will be able to improve snowmaking capacity in the next few years. I know from speaking to management that this is a top priority for the resort.

On a more positive note, the snow from this current storm and Wednesday’s potential storm should allow the resort to open significant terrain by next weekend. Additionally, conditions during the important Christmas and New Year’s weekends should be superb. As soon as Timberline gets all of its terrain open, people will quickly forget about early December’s slim pickings and once again gloat about what a great mountain Herz is for all ability levels.

andy
December 15, 2003
You give the good with the bad..Thats good reporting.You did not mention any nat snowfall amounts for this w-end so i guess canaan got bypassed again by the big dump.

I took my last run at 3 pm on Saturday, racked my skis, and headed back to DC before the storm hit so I did not experience any of the new snow the resort received on Sunday. White Grass reported 5 inches on Sunday and 2 inches last night. More snow is forecast for later this week.

Dwight
December 15, 2003
I skied FRi thru Sun at T-Line. When I left at 3 P.M. Sunday they had recieved 4 plus inches and it was pouring the snow.

mdr
December 16, 2003
Interesting report on the snow making procedures followed at Timberline. I always wondered why they were slow to open terrain, but having skied there often in late March it sure makes sense. They always have a very large base of snow that can withstand the many warm spells we always see in this region.

I just wish that they would do some minor upgrades of their lift system to make the ride faster to the top of the mountain. Their triple lift is one of the slowest around and I have spent many hours on it wondering what it would be like with a high speed quad (or at least a normal speed quad). Better yet, a six person high speed chair would be great. I know that would mean more skiers on the slopes, but for shorter lift lines and a quicker ride up the mountain I would take that sacrifice. We have skied out at Keystone and Lake Louise and Sunshine in Canada and all of those places have lifts that cover over 1500 feet of vertical and do so in a fraction of the time that the lifts at Timberline do.