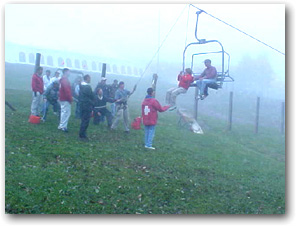 On September 13, ski patrollers from throughout the region visited West Virginia’s Snowshoe Mountain Resort to begin training for the upcoming winter season. During the training, patrollers practiced lift chair evacuations.

The leaves are already beginning to turn at Snowshoe as the resort heads into Fall. Snowshoe has set Friday, November 21 as its tentative opening date, although that is dependent on favorable weather conditions. Snowshoe will begin making snow in early to mid-November, once temperatures begin to drop.

Temperatures have already dipped in the Rocky Mountains of Colorado, and some resorts there are using the opportunity to begin snowmaking operations. Copper became the first resort in North America to make snow for the third consecutive year last Thursday night, firing up several snowmaking guns and beginning to lay a base on the Copperopolis trail. The resort made snow for 10 hours. Copper’s opening date is still a ways off, though; the resort hopes to start training sessions October 20, with a general opening on November 1.

Bahrke and Roffe joined over 100 Congressional representatives and staffers as well as snow sports retailers, resort executives and other industry professionals to celebrate the initiative. Udall and Sweeney also announced the launch of the Ski and Snowboard Caucus in the U.S. House of Representatives, which will be comprised of legislators dedicated to supporting the winter sports industry.

“Winter sports have always been an excellent alternative for staying fit during the winter,” explained David Ingemie, president of SIA. “With the advances in technology that enable consumers to stay warmer and more comfortable than ever before, such as boots pre-wired for heat, women-specific equipment, affordable resort packages or state-of-the-art waterproof breathable fabrics, never has it been so easy to step outside, enjoy the fresh winter air and get fit at the same time,” he added.

“Winter Feels Good is a great approach to get people active in the winter,” said Roffe. “I’m pleased to be part of this effort because winter sports are good medicine for the mind and body.”

Roffe, who has won both a silver and gold medal in the Winter Olympics, will be teaching workshops this winter at Pennsylvania’s Ski Roundtop resort.

The Wachusett Mountain Ski Area in Massachusetts has spent the past decade battling with environmentalists over plans to clear parts of the forest for two new ski runs. That battle heated up in early August as two protestors scaled a 100-foot Northern red oak on August 1 and set up camp, emulating the practice of “tree sitting” popularized on the west coast.

The resort’s expansion plans hit a turbulent note with the discovery of an old-growth forest on the upper slopes of Mount Wachusett in 1995. After complaints from groups such as the Sierra Club, the resort scaled back expansion plans and agreed not to cut down the oldest trees, and to leave a 500-foot buffer zone around the oldest trees. This did little to please some activists, and two protestors nicknamed “Dandi Lyon” and “Badger” spent much of the past two months perched atop one of the trees in protest, in an effort to prevent the start of tree clearing.

On September 16, the two tree sitters vacated their posts after their food buckets were reportedly cut down and after workers had already begun cutting down nearby trees.

The Wachusett Mountain Ski Area plans to keep a 24-hour security detail in place to prevent incidents of vandalism.

This is not the first time that environmentalists have conflicted with a ski resort. Resort expansion plans normally go through a productive vetting between resorts and environmental groups such as the Sierra Club, but sometimes more extreme environmental groups have taken matters into their own hands. In 1998, seven fires were set at Colorado’s Vail Resort to protest the resort’s plans to expand into possible Lynx habitat. The fires caused $12 million in damage, including the complete destruction of a mountaintop lodge.

Tree sitting is intended to be a peaceful form of environmental protest. The most famous tree-sitter, Julia Hill, spent two years living in a tree in California in an effort to protect an old-growth forest from logging.