The first high-speed lift is coming to Virginia this winter, and it’s not a high-speed quad. Wintergreen Resort is currently building The Blue Ridge Express, one of the region’s first six-passenger high-speed chairlifts. (Pennsylvania’s Seven Springs Resort is also adding a six-seater.)

The new lift will replace the Diamond Hill lift and will rush skiers and boarders to the top of the mountain in a svelte 2 1/2 minutes - barely enough time to catch your breath after that last run down the mountain. In addition to slashing the ride time by a third, the new lift will provide double the capacity. 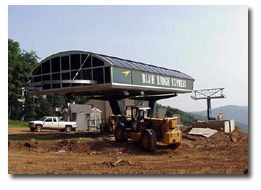 Wintergreen is also building a new tubing hill, called “The Plunge.” This mega tubing hill will provide five times the drop and three times the length of last year’s hill, The Slide. The 900-foot snow slide will offer ten lanes.

Wintergreen’s capital improvements for the upcoming season will total $5 million. The resort has spent $20 million in upgrades over the past three years.

This spring, Wintergreen Resort was one of the recipients of the Ski Area Safety Award, presented by the National Ski Areas Association. This award was in recognition of Wintergreen’s efforts to promote skier safety by producing and broadcasting a 30-second public service announcement and placing creative banners and flyers throughout the resort to communicate the “Responsibility Code.”

View what’s new for 2001 at other Mid-Atlantic resorts