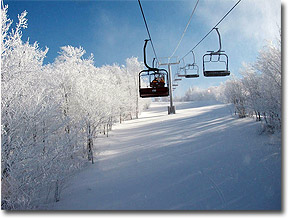 Driving to Timberline on Christmas provided yet another example of the significance of the Allegheny Front to local weather patterns. When I left Washington on Christmas morning, the temperature was 40 degrees and the sun was shining. Three hours later, I noticed storm clouds hanging over the top of the escarpment just above Scherr, and by the time I completed the four mile climb to the ridge, the temperature was 19 degrees and it was snowing heavily.

This snow provided a perfect Christmas gift for me and the other skiers at the mountain. I only had time to take a few runs on the 25th before the lifts closed, but I am glad I took them. Nothing relaxes me after a long drive more than skiing. Moreover, with a season pass, I didn’t have to buy a half day lift ticket just to ski two runs. The anytime pass allows you to ski whenever you want for as many runs as you want.

I awoke early on the 26th for first tracks and bagged some ankle deep fresh powder on Silver Streak -; a natural snow double black trail that runs under the Silver Queen lift. After a couple of runs, my wife Darina finally got up and joined me. As usual, we took Silver Queen because it is the closest lift to our condo, and like clockwork, the lift stopped a minute after Darina and I boarded it. We ended up sitting on the lift for approximately 20 minutes. One of the rights of passage for any skier is getting stuck on a lift. My worst experience occurred at Stowe with my brother in 5 degree weather on the Big Spruce double. That slow, old lift stopped at the worst conceivable spot -; the windblown summit of Spruce Peak. For 15 anxious minutes, I seriously thought I would freeze to death, but the lift ultimately started running again.

In the case of Silver Queen, mountain operations ran the lift at half speed to offload skiers before making repairs. It was a small inconvenience to pay for an otherwise wonderful four days of skiing. However, other skiers were much more upset, especially when the lift broke down again later in the day.

The Silver Queen is scheduled to be upgraded to a triple this winter. I think the resort should hold on the upgrade until the end of the 03-04 season. As Friday’s saga with the Silver Queen revealed, customers have a very low tolerance for any disruption in services at a resort. If the upgrade compels the resort to bring down Silver Queen for an extended period of time during the peak season, customers will demand lower priced tickets, or worse yet, spend their money elsewhere. As the saying goes, “you only get one chance to make a first impression.” Therefore, my advice is to upgrade the lift during the warm months, test it extensively, and debut it for next season.

Timberline opened four runs top-to-bottom when I was there and was on the verge of opening a fifth, Thunderstruck. This sounds like a low number but each of these runs covered 1,000 feet of vertical and ranged from a 2.5 mile long green trail to a steep, ungroomed, double black. I never got bored skiing this terrain in four days. Low crowds gave skiers ample room to enjoy the goods. Moreover, Saturday and Sunday offered perfect weather for skiing: blue skies, sunshine, temperatures for the most part in the 30s, and packed powder snow conditions. As my wife Darina put it, “the place looked like a Deer Valley advertisement”: lots of corduroy and empty trails.

The next few days promise a warm-up, but Timberline has enough of a base to ensure excellent skiing for New Year’s day holiday.

canaanman
December 29, 2003
Wow... that stinks that you didn't get to ski Off-The-Wall. It was open pretty much right up until Christmas. I got to see the new snowmaking hydrants, and they aren't hydrants at all... they're copy-cats of the Snowshoe system. Bravo to Timberline for new technology, but it'd be a whole lot better if they'd spend that money putting those in on Salamander.

Anyways, if you do go down OTW soon, look to the trail right just before a flat spot on the right about halfway down the trail... you'll see the tree we were sliding.

Sherwood
December 29, 2003
Hopefully, it will open soon. I was looking forward to skiing it but there were closed signs posted so I deferred.

Jarrett
December 29, 2003
It's unfortunate OTW wasn't open. How'd the other side of the valley look from the summit of herz mountain?

Sherwood
December 29, 2003
By Sunday, there was still some snow in the valley. The snowfarm at WG looked healthy. We're supposed to get about an inch tonight and maybe an inch tomorrow. Not much but we will take what we can get.

Connie Lawn
December 31, 2003
Another excellent article, and the photos are terrific!
Years ago, I was stuck on a Stowe lift for hours, in below zero temperatures. Some people actually jumped off and broke bones; I considered it. They finally evacuated us. Amazing I kept up skiing after that! Always dress warm, carry food and drink (if possible) and go to the bathroom before getting on a lift - you never know! Yours, Connie

Jean-Claude Mogule
December 31, 2003
OTW was open on Saturday the 27th. Somewhat firm but it's an expert trail anyway. I heard it described as "SCARY FAST" Just keep your speed in check. Fastantic skiing.

Ken Nail
January 5, 2004
I stopped at Timberline last Sunday (1/4/03) for the first time after taking care of some family business back in WV. Despite the less than ideal conditions, I had an outstanding time!

The lifts operated smoothly all day, and the variety of terrain is quite impressive. I was able to make excellent use of the different levels of terrain, all easily accessed from the top of the mountain.

Favorites had to be Salamander -- though a gentle green slope, it's a very pleasant cruise; Dew Drop, a nice blue cruiser, and Thunderstruck, a very approachable piece of more advanced terrain. Look forward to going back!