What a shock. After a month in the sub-tropical Pacific islands of Guam, Saipan and Rota (yes, it was work-related) and ten days in Hawaii de-stressing from disaster work (typhoon devastated Guam and Rota islands), I arrived back in the mainland US, put my dog in the Jeep, and made a beeline to my Snowshoe condo to continue the de-stressing process before returning to desk-bound duties.

For over a month, I was unexposed to mainland winter news, especially having to deal with a severe weather phenomenon fifteen time zones away accross the Date Line. As a result, I expected sort of last year’s Weather Channel wimpy winter performance where every snowflake is considered a threat to national security and brown bare mountains are the rule. What a surprise. Last year I literally skated down Shay’s and Cupp Run. This year, powder and packed powder were the rule. The resort was one hundred percent open, period. No ifs and buts.

Before you drop whatever you are doing and head off to the slopes of West Ginny, three words of caution: First, make sure your car has good tires. With this winter shaping up as a banner year despite the desperate cries from the Weather Channel (by this time you assume I have a dismissive view of our winter-neurosis-possessed Hot-lanta based cable channel, don’t you?), the roads to Snowshoe are a bit icy and snow-covered. The high ridge of the Appalachians has been getting snow about every three days or so thanks to the wind patterns from the Great Lakes, and although I commend the West Virginia snow removal efforts, getting rid of snow altogether from the roads is virtually impossible, as wind-driven snow can cover the roads suddenly. If you’re interested in checking road conditions, you may check the West Virginia State Police road condition report, updated daily, at www.wvdot.com. Look for the link to road conditions next to the DOT seal.

The other side of the warning is wildlife. With several bad (that means warm) winters in a row, a collision with the numerous and obviously well-fed deer looking for food in, around, on and beside the road can be a catastrophic experience. Just imagine a six-hundred pound ballistic missile in your windshield… Slow down especially at night, the animals are there in herd-sized groups.

The last caution: At least for the foreseeable future, expect bitterly cold weather. Morning lows are in the below-zero to single digits. Last year’s practice of a light fleece undergarment with a shell jacket being enough doesn’t apply this year. It may be 30 in DC and Philadelphia, but at 5,000 feet it is a totally different story. Last Sunday, the windchill factor was an impressive 47 below zero.

I arrived Saturday evening and was ready for a full day of Sunday skiing, warming up on the long groomers of Yew Pine and Log Slide, then off to the blues of Moonshine, Gandy Dancer, and the upper and lower Ball Hooter. My favorite cruiser, Skip Jack, was closed off for Nastar training although I was able to sneak in one run at lunch time. It was deliciously groomed. The black runs of Knot Bumper and Grabhammer had numerous sweet moguls, and though I’m normally a Deer Valley-type groomed cruiser, I could not pass the challenge of packed powder bumps instead of an uneven ice-skating rink. Then it was off to Widowmaker and J-hook. Could not be better. I tried Cupp the next day and it was also spectacular. Tuesday I went off to Silver Creek. In some of the runs, I was the only skier. No lines. No wait. Then back to the main side of Snowshoe where the line at Ball Hooter was less than 30 seconds long. Quality skiing throughout.

Other than at College Break Week, now sheduled for 2-12 March, weekdays at Snowshoe are a delight. Not only is the resort fully open and all the resources available without waiting, but the uncrowded slopes are a welcome respite from the half-hour wait at Ball Hooter on weekends.

If you are interested in additional winter sports, the snowmobile trails are fully open and besides downhill skiing, snowshoeing and nordic skiing are definitely “in” this year. The 43 miles of the Highland Scenic Trail, unpaved in the winter and most of it above 4,000 feet, present a snow-packed golden opportunity. The Elk River Touring Center (www.ertc.com) also has five kilometers of open trails within their property as well as thirty five additional kilometers that cross the Highland trail.

My next challenge is a ten-day Austrian escapade scheduled for next week. But more on that later…

While actually born in the tropics (Cuba), Lou grew up in New England and went to College in Vermont, where he initially took up skiing. He then embarked on a twenty-two year Air Force piloting career that took him to over 50 countries. He has skied in Europe and America (both North and South). His second career as a senior officer with the Federal Government spanned thirteen years and in 2010, Lou retired to pursue a more leisurely life style. 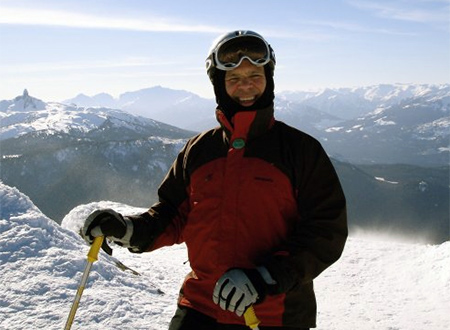 John Sherwood
January 21, 2003
Snowshoe is really delivering the goods this year. I'm hoping to sneak down there midweek as well before this great season finally ends.

JimK
January 24, 2003
Lou, I really want to hear about Austria, and if you're going to Bad Gastein, especially about a run called Hohe Scharte; 5 miles, 4789' vert, sounds epic if it's open all the way.

liz
April 5, 2005
I think it sucks I was looking for a picture and you gave me an article