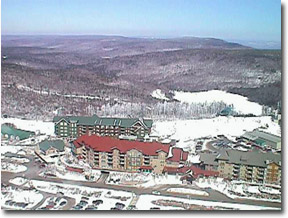 Snowshoe was originally developed by Thomas “Doc” Brigham, an entrepreneur that saw the potential of the area for winter sports. Working out of Elkins, he made a trek 45 miles each day to the rugged, undeveloped area as the resort’s development began. The first season offered limited amenities for visitors.

“Shaver’s Center was the center of life here the first winter,” relays Tex Ritter, Snowshoe’s Director of Mountain Operations. “Guests would sleep on picnic tables or the floor of Shaver’s.”

In 1974, French Olympian Jean Claude Kelley was brought to Snowshoe as a consultant in the development of Cupp Run, now one of Snowshoe’s most popular trails. In 1992, Snowshoe acquired Silver Creek, a smaller resort just down the road. In 1995, Snowshoe was purchased by the Intrawest Corporation, which became famous for developing resorts such as Whistler-Blackcomb.