Bob Reuter, an adaptive skiing instructor with Ski Roundtop, first began skiing several years ago. Like many first-time skiers, he was dragged to the slopes by friends “kicking and screaming.” Unlike most first-time skiers, though, Reuter is a veteran with spinal cord injuries.

“It was some of the worst weather I have ever skied in,” Reuter says of his first experience on the slopes, “but I was hooked on that first run down ‘Velvet’ up at Whitetail.”

After several clinics and lessons, Reuter purchased his own ski and headed up to Ski Roundtop. Reuter’s ski, called a monoski, consists of a molded seating system atop a single ski, complete with a shock absorber system. When properly positioned, a monoskier uses the seat in the same way as boots are used by “standup” skiers. A monoski is no less capable than regular skis: coupled with an accomplished skier, it can carve down the blacks and bounce through the moguls.

Reuter was anxious to try out his new monoski.

“I looked out the window, and decided to trash the chores and drive up to Roundtop,” Reuter says. “I grabbed my ski and got on the Minuteman lift. At the end of the first run, it hit me - I did this completely on my own, I didn’t have to ask anyone, there was no one else involved!”

Indeed, the feeling of freedom and independence that skiing affords is a large draw for persons with disabilities, and new technologies and attitudes are opening up the sport of skiing to people with a wide range of disabilities.

“That feeling of freedom that day was a major part of the reason I have become an instructor,” says Reuter, referring to the euphoria he felt while skiing at Ski Roundtop alone for his first time.

“I hope to be able to help as many others share that liberation and feeling as possible,” he adds.

David Begg, the Director of Adaptive Skiing for Snowshoe Mountain Resort, also hopes to introduce as many people with disabilities as possible to the freedom and satisfaction of skiing. Begg is an amputee, but having only one leg doesn’t prevent him from being one of the best skiers on Snowshoe’s slopes. 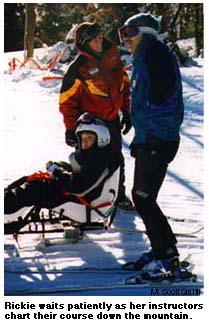 Snowshoe caters to skiers with a multitude of physical and developmental disabilities, such as spinal cord injuries and even loss of sight.

In fact, some of the best skiers on the slope are blind.

“Even beginners, they have an enhanced sense of balance, which us mere sighted mortals don’t have,” says Begg. “They’re used to knowing what’s happening around their feet,” he adds.

Blind skiers can concentrate on the subtle interaction between their feet and the snow, immune to the visual “noise” that sighted skiers can be distracted by. Of course, important information - such as the presence of a tree in a skier’s path - is also present in that visual “noise,” so blind skiers are accompanied with a sighted guide that calls out the location of obstacles.

Rickie Ann McLaughlin, a 21 year old from Virginia who was born with Cerebral Palsy, tried out skiing for the first time in December at Snowshoe’s Silver Creek area. Cerebral Palsy is a brain disorder characterized by an inability to control motor function. As such, Rickie spends most of her time in a wheelchair, but she happily shed her wheelchair for a chance to ski down Silver Creek’s slopes in a biski, a type of “wheelchair on skis.”

Rickie was able to turn by leaning to the right or left in the biski. Two adaptive instructors followed closely behind, one with a tether to the biski to help steer or slow down the biski if necessary.

Monoskis and biskis were originally developed to assist skiers with spinal cord injuries, who cannot stand independently on traditional skis. Developed first in Europe and popularized in America over the past ten years, the biski allows skiers to sit down and steer by leaning right or left. Conventional mono and biskis can be loaded onto regular lifts. 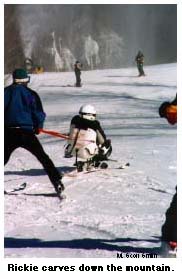 The biski contains one ski in the center, with outriggers (or “mini skis”) on the sides to keep the biski from tipping over. A ski tip in the front serves as a “bumper,” and is mainly used to assist skiers getting off the lift.

Adaptive skiing and its equipment were initially aimed at amputees, but have since expanded to include skiers with developmental disabilities and a wide range of physical disabilities.

Non-disabled skiers often do a double-take when they see a mono or biskier carving down a slope. How do skiers react to this?

For the most part, according to Begg, non-disabled skiers and snowboarders are happy to share the slopes with adaptive skiers and often express curiosity.

“That is so cool,” said one snowboarder at Snowshoe’s Silver Creek, as he observed Rickie skiing down the slope in her biski. “That is awesome,” he reiterated, shaking his head in disbelief.

“The young snowboarders think [my monoski] is neat and wonder where to get one!” remarks Reuter, referring to a common reaction to his non-traditional ski.

Mostly, though, skiers with disabilities want to be treated just like any other skier. Although Reuter acknowledges that other skiers might find adaptive skiing to be inspirational, he shudders at the term, arguing that there should be nothing inspirational about doing the same thing everyone else is doing.

“The problem is that it has a distancing effect and [other skiers] are afraid to talk or even share a lift with [adaptive skiers],” says Reuter. “I enjoy talking to other skiers about the same stuff,” such as trail and road conditions, he adds.

Attitudes from fellow skiers and boarders are sometimes more engaging than the attitudes from ski area management.

“The hardest part of adaptive skiing is getting from the parking lot to the snow,” says Reuter. “Very few resorts are friendly places for a person with a disability.” Reuter rates West Virginia’s Timberline resort as the most accessible area for skiers with disabilities to get from their car to the slopes.

Although more and more ski areas are opening up their slopes to skiers with disabilities, quite a few have refused to allow adaptive skiers to ski on their slopes. Today, less than half of America’s ski areas actively support adaptive skiing.

In short, the ADA may be interpreted by the courts to state that ski areas must open their slopes to skiers with disabilities.

“We don’t really know what’s going to iron out as far as what has to be provided to people - there’s [no legislation] that says we have to do this right now,” says Begg, referring to the adaptive program at Snowshoe and other resorts.

“But what’s happening at a lot of ski areas is you get a call from somebody - a monoskier - who wants to come down to ski. ‘We don’t do that, we don’t allow that,’ says the resort, to which the monoskier replies ‘oh, I also happen to be a lawyer.’”

“Unfortunately, some of this is going to have to be answered by litigation,” concludes Begg.

That has already started to happen out west, according to Reuter.

“One western area almost lost their Federal land lease,” says Reuter, referring to a ski area that had a run-in with the government after failing to grant access to an adaptive skier.

Ski areas are hesitant to support adaptive skiers for a multitude of reasons, such as fear of litigation or simply being afraid of the unknown. Yet, adaptive skiing has an excellent safety record, so these fears seem unfounded.

It seems inevitable that all ski areas will one day be required to support adaptive skiing, even if political lobbying becomes necessary. Thankfully, most of the ski areas in the local area not only permit adaptive skiing, but are strong advocates of it.

“It’s going to be written in stone sometime that if a [ski area] has 1,500 pairs of rental skis, they must have one monoski, and one biski,” says Begg.

“The biggest limiting factor in adaptive skiing today is the lack of rental equipment,” Reuter explains. Beginner skiers and snowboarders don’t rush out and buy their own equipment right away, and it’s unreasonable to expect adaptive skiers to. Yet, unless adaptive skiers visit areas with strong programs in adaptive skiing, renting is not an option and this prevents many persons with disabilities from entering the sport.

Different ski areas have different philosophies when it comes to adaptive skiing.

“You’re looking at a program that is not revenue-generating per say, for your host area,” says Begg, but he adds that adaptive programs “generate an awful lot of unseen revenue.” 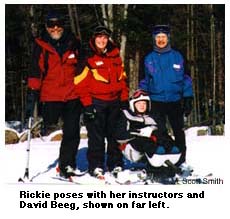 “Families come here specifically because of our adaptive program,” says Begg, referring to Snowshoe, which even extends its adaptive program to mountain biking during the summer.

“Disabled people work and have jobs and have disposable income, and families; they’re just like you and I; when they’re skiing, they bring 3 or 4 friends, they drink, they eat, they do all that stuff,” says Begg, demonstrating the ways ski areas can profit from adaptive skiing programs.

Sure enough, Rickie and her family honed in on Snowshoe specifically for its adaptive program. Rickie and her father read an article in a magazine about adaptive skiing, and decided to give it a try. Along with Rickie came her entire family and several friends for a relaxing weekend of skiing and tubing at Snowshoe.

“We’ve got about 50 volunteers at Snowshoe, which are actively recruited and trained,” says Begg. “We’re always looking for more volunteers.”

“All programs need volunteers,” agrees Reuter. “Ski Roundtop has made the decision that the adaptive program is fully part of the ski school and the instructors are paid the same as all other instructors.”

With the right equipment and training, even people with severe disabilities can discover, enjoy, and excel in the sport of skiing.