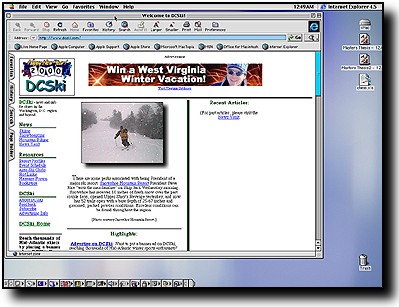 When the clock struck midnight on the east coast, ringing in the year 2000, the power didn’t go out. The telephone lines continued to work. But news articles and event listings temporarily disappeared from the pages of DCSki.

Article abstracts and event listings are stored in a central database. Various pages throughout the site poll this database to draw up-to-date information. For example, when a reader visits the home page for DCSki, recent articles and upcoming events are polled from the database and listed, an operation that is highly date-dependent.

This software, custom-written by DCSki, was modified several months ago to gracefully handle the transition to the year 2000 and to handle events that spanned across the millennium. However, when the year 2000 arrived, the system clock reported that the year was 100. DCSki is hosted on a server operated by an independent web presence provider, and the behavior of the system clock on this server was not known in advance.

DCSki’s software was anticipating that the system clock would report the year as “00” or “2000”, and thus automatically aborted when it encountered “100”. This problem was fixed within minutes and DCSki should be operating under normal conditions now. However, it did cause a few harrowing moments for DCSki’s Editor when he visited the site shortly after midnight and saw an unexpectedly blank home page.