There’s nothing like ripping groomers on a blue sky day in the Rocky Mountains. It’s so exhilarating — just you and the mountain, sun and snow, and the sound of wind and skis carving soft, dry powder. I experienced that during a visit from March 1-4, 2020.

For those who enjoy this type of skiing, Colorado’s Beaver Creek Resort could not be better. The resort offers 1,815 skiable acres of terrain spread across three distinct mountains and served by 26 lifts. I typically logged 20,000 vertical feet by lunch and close to 40,000 by the closing bell. The resort’s high-speed uphill lift system combined with limited lines made this possible. What’s not to love? 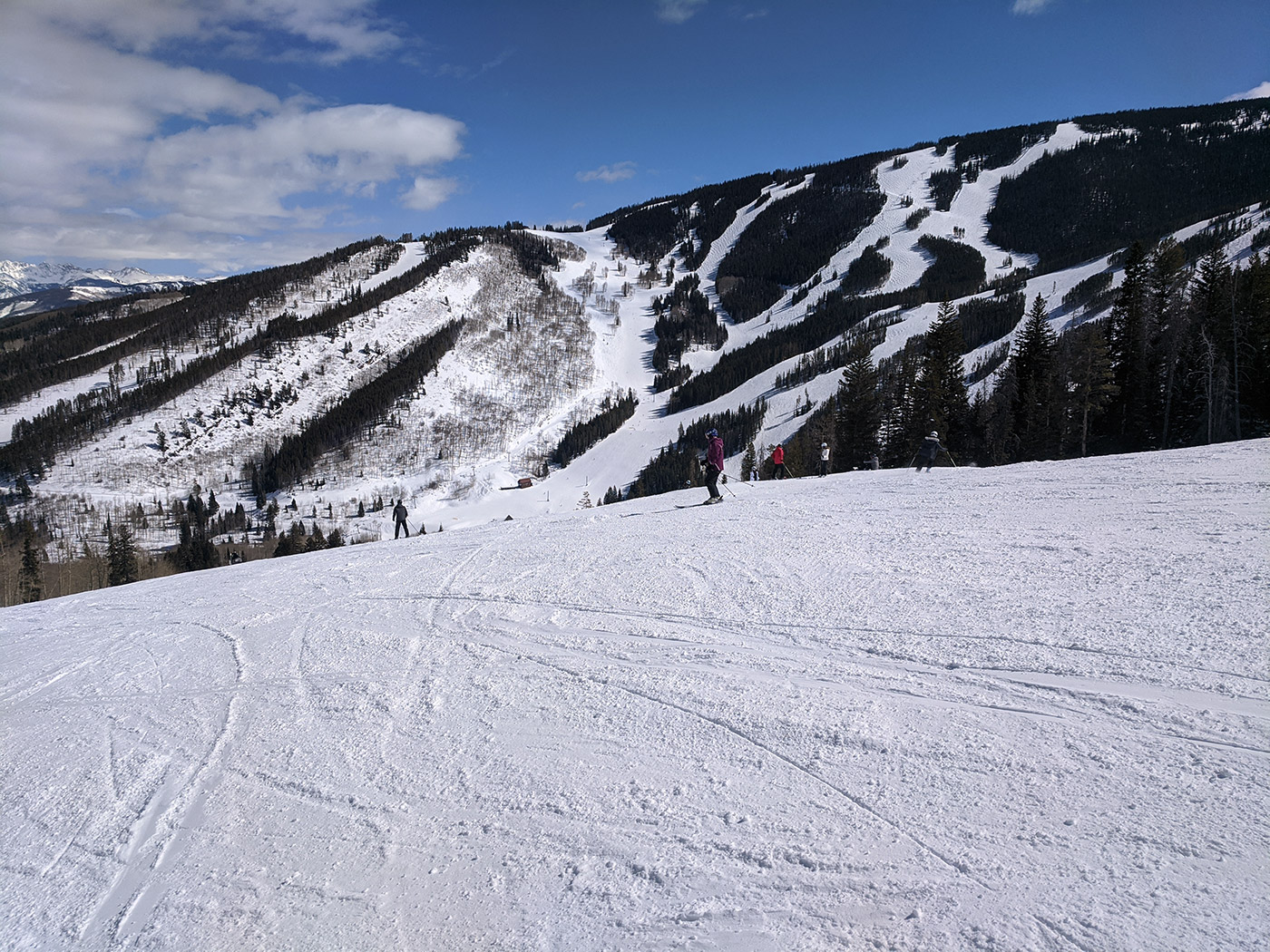 Well, it was admittedly not my cheapest ski experience. Owned by Vail Resorts, Beaver Creek stands out as one of the most exclusive destination resorts in the country but also amongst the most expensive, especially for those like me lacking an Epic Pass.

I made a decision to travel to Beaver Creek about seven days in advance based on snow conditions and expected weather. The non-stop United Airlines flight from Dulles to Denver was a breeze, taking just under four hours. The Epic Mountain Express shuttle ride to the mountain took approximately three hours.

For lodging, I chose the Westin Riverfront for its combination of easy access to the slopes (the gondola is just steps from the ski valet) and moderate altitude (7,430 feet versus over 8,100 for most upslope accommodations). I typically do not have problems with altitude, but the old adage, “it’s not where you ski but where you sleep,” definitely applies. Sleeping lower gave me more energy for the slopes. 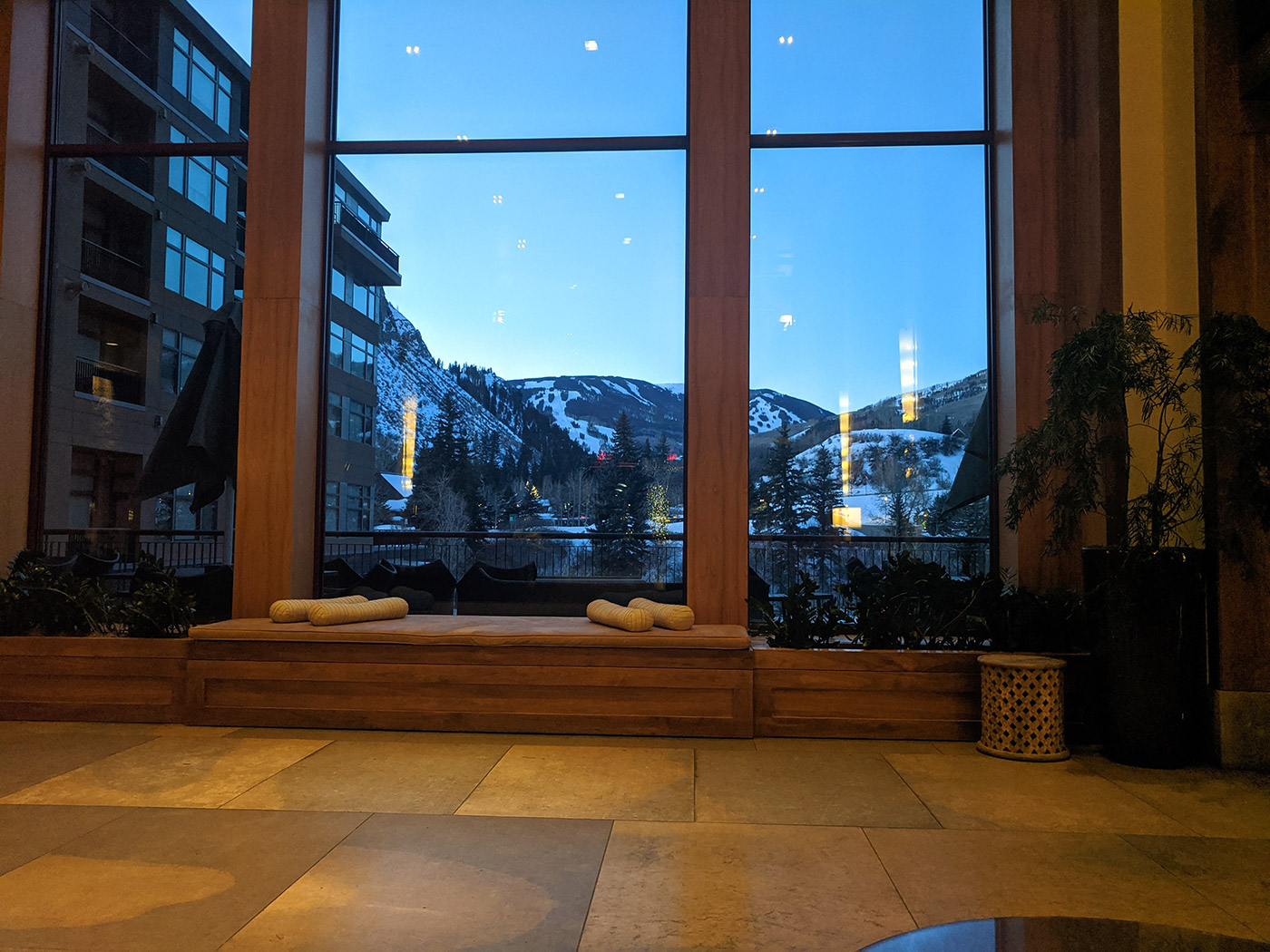 View of Birds of Beaver Creek from the lobby of the Westin Riverfront, taken at first light. Photo by John Sherwood.

The Westin Riverfront also has rooms with small kitchens (two burner stoves, a microwave, refrigerator, and dishwasher) and its own ski shop for rentals. I gave up slogging skis on aircraft many seasons ago. Instead, I rent demos and swap skis out depending on snow conditions. For this trip, I rented Nordica Enforcer 88s and stuck with them for my entire stay. The 88-mm width worked well on groomer days and also handled the one powder day of the trip — a 4-inch storm consisting of light, dry powder. I was amazed that I could get these skis up on 15-inch powder stashes. They also performed excellently on tracked out snow, and held firm on ice. This could be a one-quiver choice for an East Coast All Mountain ski.

Whenever I ski a new mountain, I always focus on trail ratings. What does a blue square really mean at this particular mountain? Unfortunately, there’s usually huge variation in trail markings even within the same resort. Blue squares at the Bachelor Gulch or Arrowhead areas are noticeably lower angle than at Larkspur, or Beaver Creek Mountain. When a trail received its last groom also affects difficulty as does snow quality, weather, etc. Hence, it was fortuitous on our first day that a gentleman named Steve observed us pondering the trail map on the Strawberry Park Express.

“Where are you trying to?”

“Anywhere steeper than Bachelor Gulch or Arrowhead but it has to be relatively smooth,” my wife chimed in.

“I’ll take you to the Larkspur Bowl.” 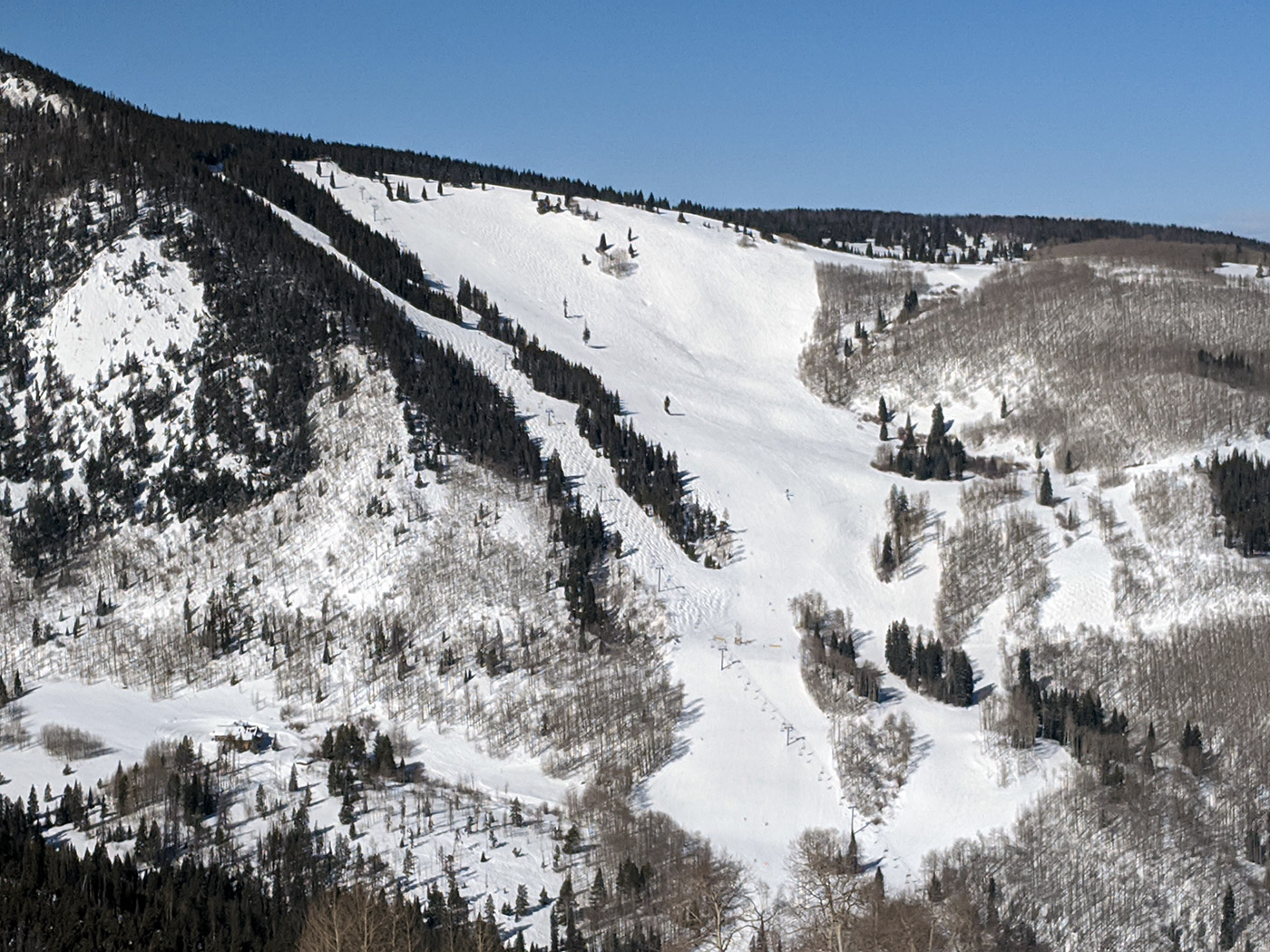 After taking us on a run down Larkspur, a huge bowl that has both groomed and ungroomed options, Steve offered to show us more of the resort. And so it went that we skied nearly 35,000 feet of vertical with this Avon resident and unofficial ambassador of Beaver Creek. Hiring an instructor for a day of skiing or guiding at Beaver Creek would have cost $1,119, so we were eternally thankful that Steve showed us around. One of the things I love about skiing are the serendipitous personal encounters one makes on the mountain. These can range from a 5-minute chat on a high-speed lift to making a few turns to spending a day skiing with a person or group of people. For some reason, mountains tend to be a safe space for socializing — a rare venue where people tend to let their guard down a bit.

One benefit of skiing with Steve was that he quickly assessed our ability levels and took us on more challenging terrain than we might not otherwise have had the guts to ski. On the double black section of Golden Eagle, he also gave us some pointers on how to ski a particularly steep headwall. By the end of the day, we were skiing nothing but black terrain. My favorites included Ripsaw, and President Ford’s. From the Strawberry Park lift, one can see the former president’s Beaver Creek residence, which includes a bunker complex.

Like Aspen, Beaver Creek stands out as a place to rub shoulders with one percenters and celebrities. It’s also not uncommon to see Olympic athletes on the slopes. Steve had some good stories about meeting Lindsey Vonn, Billy the Kid, and Herman Maier. I asked him if he’d ever encountered Mikaela Shiffrin? He said no but suggested we work out in our hotel gym, which is named after Shiffrin and a place where she regularly trains. Unfortunately, we did not have the energy after long days of bell-to-bell skiing on the mountain, but we did visit the gym to take showers following our final day of skiing and saw the huge pictures of Shiffrin plastered on the wall.

The Westin Riverfront claims that its gym ranks in the top 10 in the United States, and I believe it. A relatively compact facility, it contains everything one might need including a sports medicine facility and a heated swimming pool. It was amazing to see the steam coming off the lap swimmers early in the morning when temperatures hovered around 16 degrees.

Beaver Creek has many on-mountain dining options ranging from gastronomy to basic skier grub. The common theme throughout all the eateries was decent quality but expensive prices. Simple meals with no beverages at the Spruce Saddle Lodge or Talons Restaurant generally averaged above $25 per person. I sampled a variety of on-mountain fare at resort-owned restaurants including the burger, quesadilla, pho noodle soup, barbeque, and salad. The entrees were superior to food court meals at Tysons Corner but not quite up to the standards of a decent American restaurant such as Ted’s Bulletin. 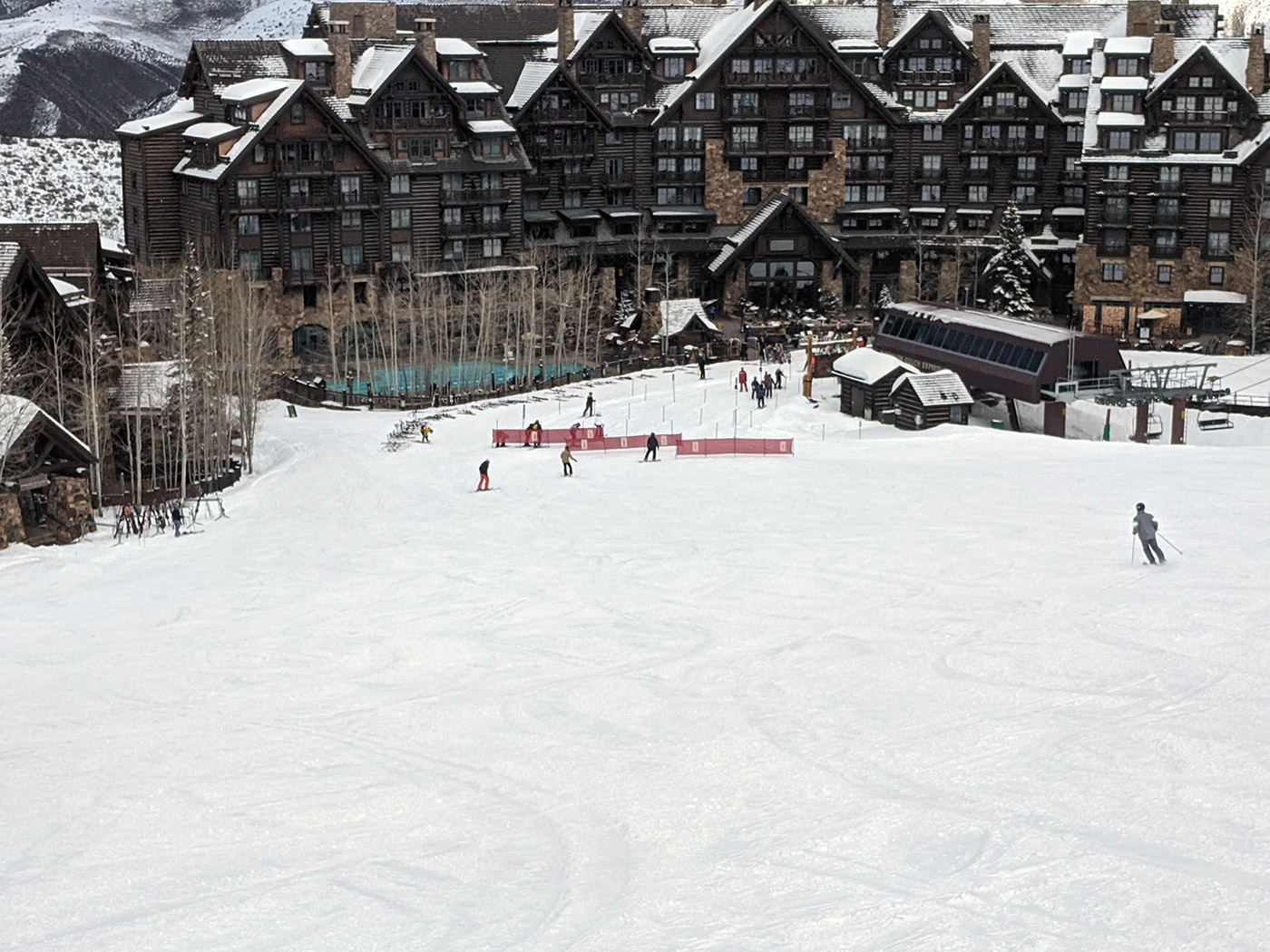 The general sticker shock I experienced at Beaver Creek finally convinced me to purchase “all you can eat” Epic passes for my wife and I next season. Skiing just four days at a major Vail-owned resort will pay for the pass, especially when considering its 20% discount on lodging, shuttle service, rentals, lessons, and food. More importantly, it might motivate me to ski more, both locally at Whitetail and further afield.

With an Epic Pass in hand, I hope to return to Beaver Creek next season. For intermediates and advanced skiers, it contains an enormous wealth of options. For beginners, it’s one of the best mountains I have ever visited with 51 green circle trails and a unique high elevation beginner area at the summit of Beaver Creek Mountain. Beginners can also move easily from mountain to mountain on low angle catwalks. The only skier type who might get bored here is the exceptional expert, looking for truly extreme terrain. Nearby Vail can apparently satisfy those needs as might some backcountry options in the region.

Rob Katz, the CEO Vail Resorts and arguably the most influential person in the ski industry, hosts a podcast called “Epic by Nature.” In it, he and his guests wax eloquently about the many virtues of Vail Resorts. While at times pure propaganda, the podcast does offer many insights about the resorts. From Rob, we learn about how much emphasis Vail places on safety, quality instruction, food services, and mountain operations. All of the Vail Resorts I regularly visit live up to these ideals. None are cheap and some room for improvement exists in certain facets of the experience, but overall, I am happy with my investment in two Epic Passes for next season. To quote Eddie Money, “I’ve got two tickets to paradise; won’t you pack your bags, we’ll leave tonight.”

You did well with the timing of your visit John!  20 years ago I used to poke fun at the fact that Beaver Creek had escalators around the base village.  No more:-)

Beaver Creek was the first ski area I ever skied out West, back in the early 90's. Arrowhead was a separate area back then, Bachelor Gulch didn't really exist and Birds of Prey Downhill Course was a mogul run. And started further down the hill. Centennial was the "premiere" downhill back then, but it was tame by international standards.

Pricey back then, but good place to avoid the crowds at Vail on busy days. Avon was relatively affordable back then.

Weird mountain with lots of layout quirks. Known for emptyish well-manicured groomers, it has plenty of steep and long bump runs and plenty of side and backcountry access.

Jim, I was very lucky with timing. Had I scheduled the trip later in March, I would have been in trouble.

JohnL, agree that BC offers some nice surprises for those who know where to look. Steve showed us many on our first day. There's nothing like skiing with a local. They not only show the goods but also how to access those goods. Learning the connections and catwalks at BC and some hidden trail entrances makes all the difference. With that said, I never saw anything as challenging as Lone Tree at Snowbasin or some of the stuff off No Name. Then again, there is a lot more for beginners amd lower level intermediates at BC than Snowbasin. Bachelor Gulch and Arrowhead are perfect for less confident blue square types.

Love Love love the Beav!! I have been going there in the Spring for over the past 15 years...sorry not this year.

There is so much to expore and so much up hill capcity. I like the new EpicMix game where you try to ride every lift in one day. At Beav that is a challenge. Other than right in front of the lodge it is never busy. Lots of room to roam!

I am a crusier/carver guy and love the grooming at the Beav as I can really open up. Even over at ArrowHead if the condtions are good it can be fun Normally get huge numbers. Grouse Mtn is a real challenge. The Talons Challenge held every Febuary where one has to ski all the "bird" trails in a day is an awesome event.

Note tha the Beav is on the dry side of the mountians and gets less snow than those farther and higher East. Also Arrowhead is really low and can get slow and super slushy...but never crowded!!!

I am part of the great unwashed and normally stay in Avon or Vail. I was upset a bit when they added the paid parking but if your car is full you can park underground at the main lodge for 30 buck a day in a heated lot. A steal.

If I could ski just one area for the rest of my life it would be The BEAV!!