A week before my scheduled departure to Utah, I checked AccuWeather and noticed that the forecast called for a high pressure period of mostly sunny days and reasonably cold temperatures — beautiful weather for cruising the groomers under sunny skies. Oh, how this forecast turned out to be wrong.

During my six day visit to Utah’s Snowbasin Resort, beginning on February 2, 2020, the mountain received over 22 inches of snow with temperatures ranging from negative numbers to 50 degrees. On some days, the lightest of snowflakes fell from the sky; on others, rain, sleet, and grapple. Never in my six trips to the area have I experienced such thick fog or such a wide variety of snow conditions ranging from blower powder to cement. It was the best of times; it was the worst of times.

As an East Coast skier, I confess that my powder skiing is fair to middling. Fortunately, by renting demo skis at the Snowbasin rental shop, I could easily swap skis depending upon conditions, which often changed several times during the course of the day. For soft powder conditions, I found that the Blizzard Bonafides (98 mm under foot and 173 cm in length) worked reasonably well and also proved quite capable in tracked out snow and groomers. I also skied the Salomon QST 99s (188 cm length) on soft powder conditions. The longer length made it a bit tougher to turn in tracked out snow but I loved this ski on untracked terrain 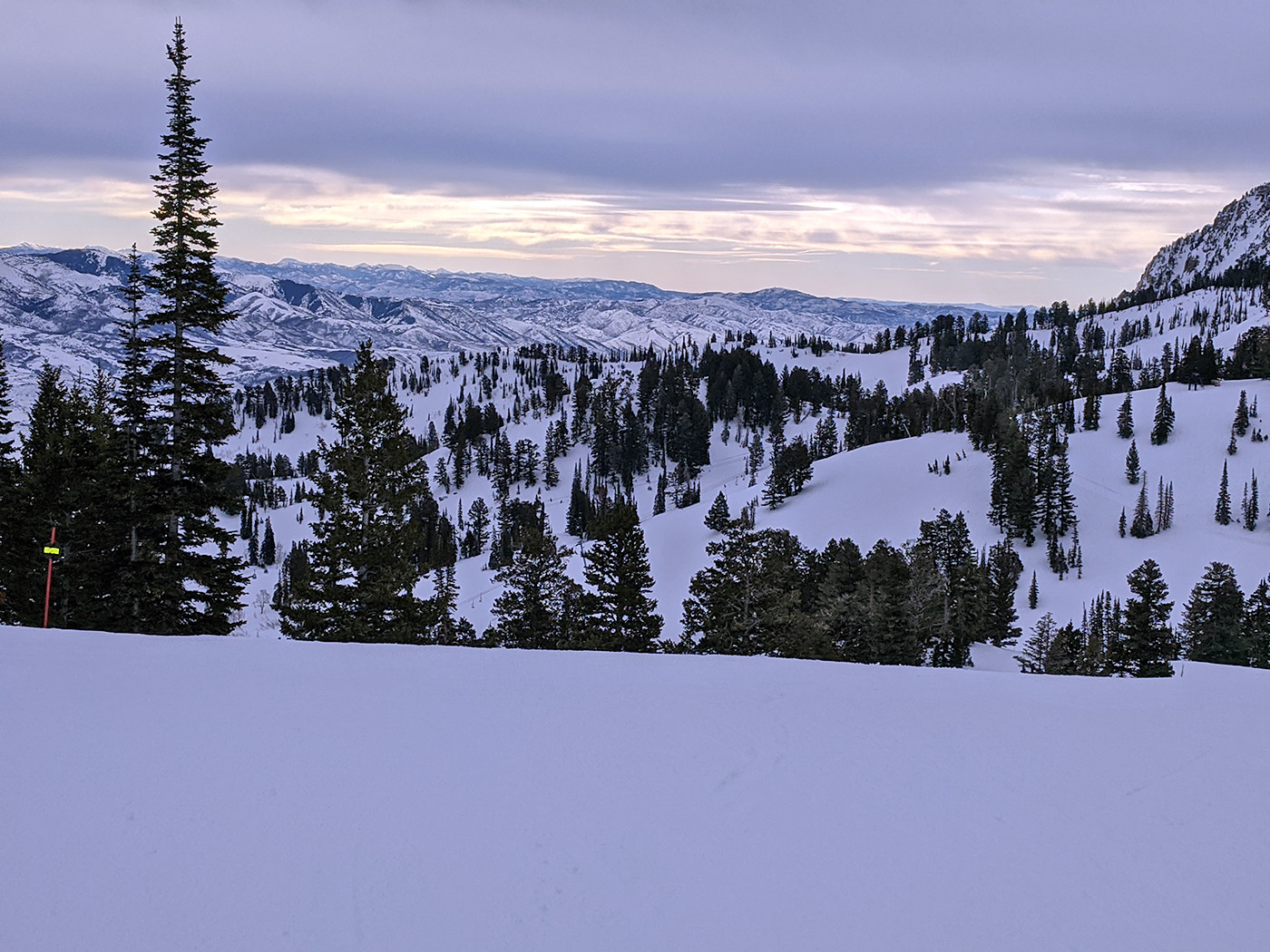 I shied away from true powder skis and focused more on West Coast all-mountain type skis. Why? Because the conditions on the mountain were so variable: I could be skiing untracked powder off the Ogden Road or the Porky Face on the upper mountain and then bumpy, tracked out stuff by the time I hit the mid-mountain and then spring snow on the City Hill towards the bottom.

On the one blue bird day we experienced and also most afternoons when things became tracked out, I gravitated towards the Head V-Shape V10 (177 cm in length). I also deployed these skis in heavy, wet snow conditions and in rain and sleet. The V10 has a wood core strengthened by Carbon and Graphene and is 85 mm under foot. It’s extremely light and versatile and could conceivably be a one quiver East Coast ski.

I plowed through crud, sliced steep black diamonds, and floated on powder and wet snow with these unflappable skis. One of my fondest memories was skiing untracked fern snow on the Wildcat Bowl with these guys — hanging on the steepest part of this giant halfpipe-shaped bowl on the skier’s left and just flying over creamy Spring-like snow.

One of my minor peeves about Snowbasin is its lack of slope-side accommodations. Of course, this same lack of development makes this mountain one of the most aesthetically pleasing in Utah — a magical place where I can pull off trail to watch an ermine frolic in the snow, a flock of white-winged crossbills alight on a spruce tree, or a Steller’s jay squawking. On one trip, I even saw the Porcupine area’s namesake right under the Porcupine Triple. I’ll take this nature any day over upslope development.

At about 30 minutes, the commute from Ogden is relatively short and traffic free, but when it’s dumping snow it can be somewhat harrowing (although certainly less scary than the Little Cottonwood Canyon road, which suffered three avalanches while I was there, and ended up being closed for two days).

After having just lived for four months in Europe without a car, I am much more open to public transit options than in the past. Hence, when my wife suggested that we take the UTA bus, I happily agreed. For four out of six days, we parked at Rainbow Gardens and took a special winterized ski bus to Snowbasin. With burly snow tires, automatically deployable snow chains, and internal ski racks, these buses can maintain the speed limit even on white roads. 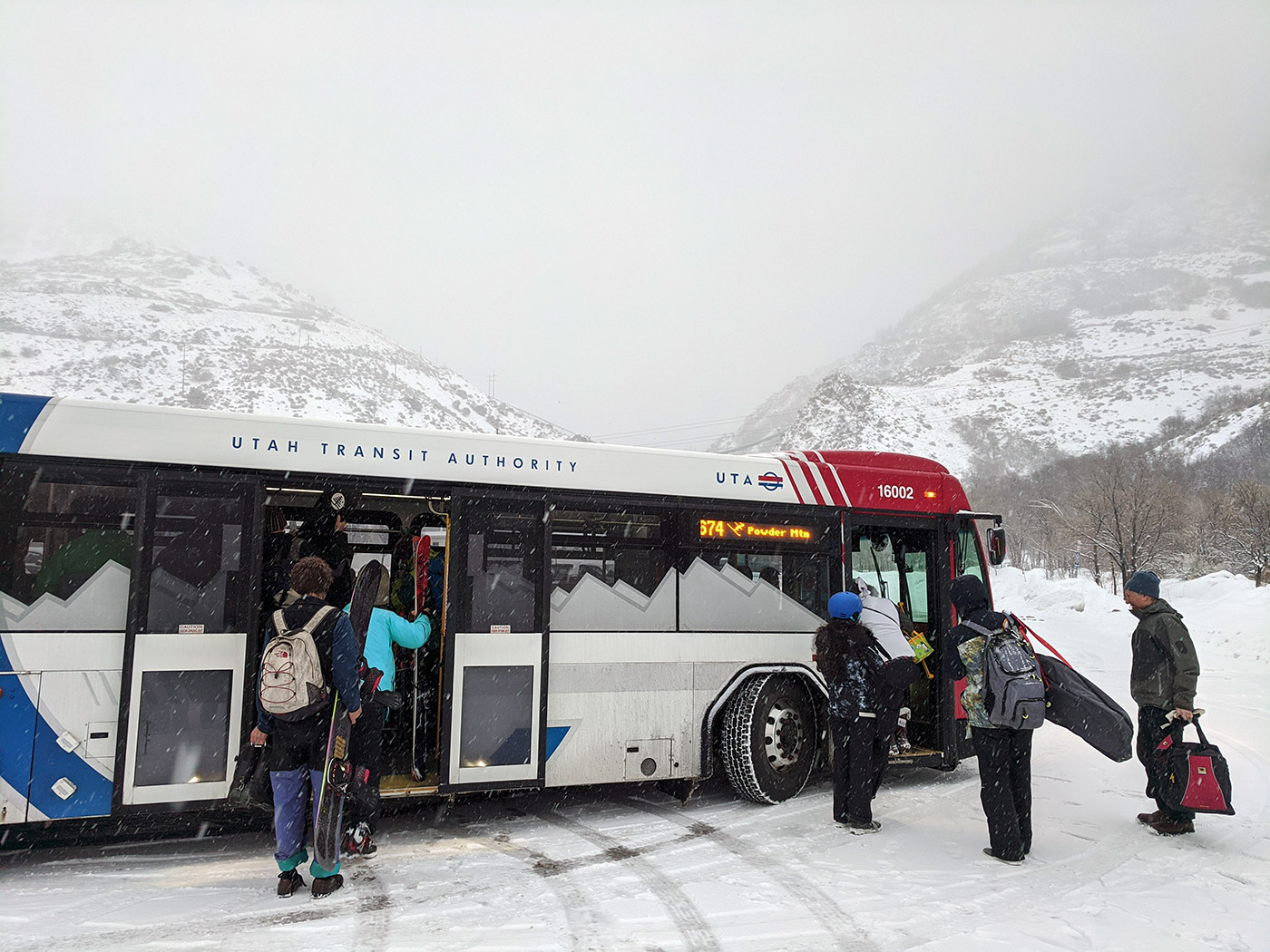 Catching the bus at the Rainbow Gardens Park and Ride. Photo by John Sherwood.

Rather than enduring white knuckle drives, I enjoyed catching naps or chatting with Snowbasin staffers and other skiers on the bus. Rather than hiking from a back lot on a crowded powder day, I loved being dropped us off just a few steps from Earl’s Lodge. On my next trip, I may go car free and rely completely on public transit and the occasional Uber to get around. Ogden is accessible to Salt Lake City airport via TRAX and the Front Runner trains and the downtown area near Union Station are serviced by the ski bus and quite walkable.

This was my sixth trip to Snowbasin since 2012. In previous articles, I have explained my reasons for choosing this mountain over others and also pointed out some of its weaknesses. One weakness that became a problem for me this trip was the often poorly marked trails — an issue at many resorts in the American west where trails and side-country sort of blend together in not always harmonious ways. 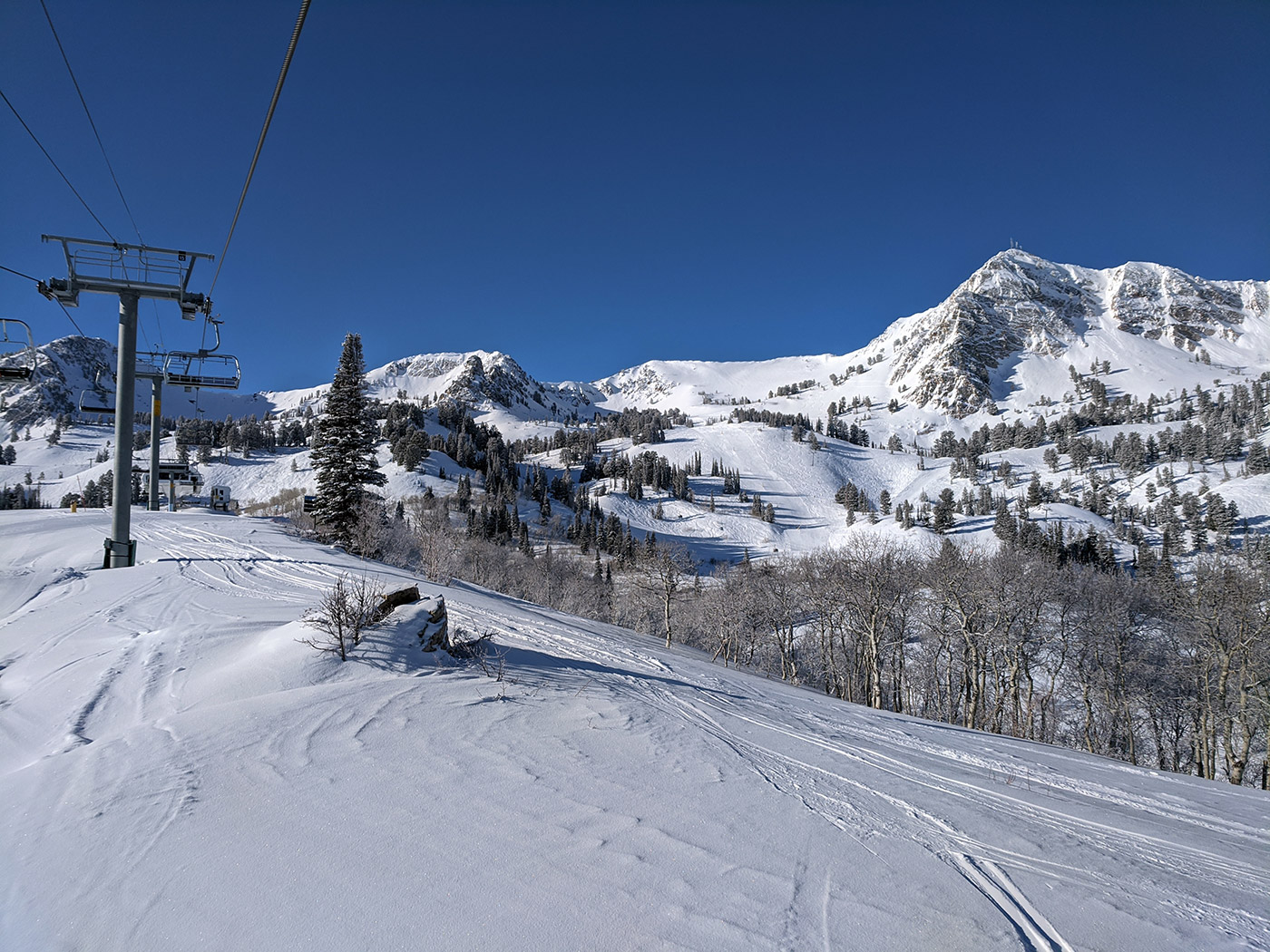 View of Mt. Ogden from the Wildcat lift. Photo by John Sherwood.

On a very foggy last run one day, I chose to ski Dan’s Run down from the Needles Lodge, where I had just enjoyed a cappuccino by the fire. Dan’s is an easy, tree-lined blue cruiser — perfect for low visibility. Dan would be my man, I confidently thought in my slightly caffeinated state. The Strawberry Traverse went well. No vertigo despite my inability to see anything more than a few feet in front of me. And then tall pine trees — maybe not the “Pines of Rome” but certainly charming in their own way. Finally, I could accelerate on the soft snow, knowing that contrast would be provided by the evergreens.

Twenty turns later, I was off trail in a small ravine blocked at the bottom by a snowmaking pond. What a way to end the day! I then made the dumb decision of taking off my skis and hiking out in waste-deep snow (always keep your skis on and try and side step or traverse out of these types of situations).

Snowbasin can kick you in the pants if you let your guard down even for a moment. You have to bring your “A Game” to this mountain for every run, but its terrain diversity (especially under changing weather conditions) make it an interesting and unique place to ski even after over 30 ski days on the mountain.