During the winter, road closures render much of Mount Rainier National Park inaccessible. Skiers and snowboarders, however, can experience high alpine terrain in the Cascades with stunning views of Mount Rainier at Crystal Mountain simply by riding a ski lift. 40-knot gusts and grapple welcomed me on my first visit to the summit of Crystal Mountain but the views of Mountain Rainier remain one of my most indelible ski memories. Of all the places I have skied, Crystal Mountain stands out as one of the most picturesque and fairytale-like. From its mountain views to the experience of gliding past towering Douglas firs, this mountain lived up to its reputation as being one of the best places to ski in the Pacific Northwest. 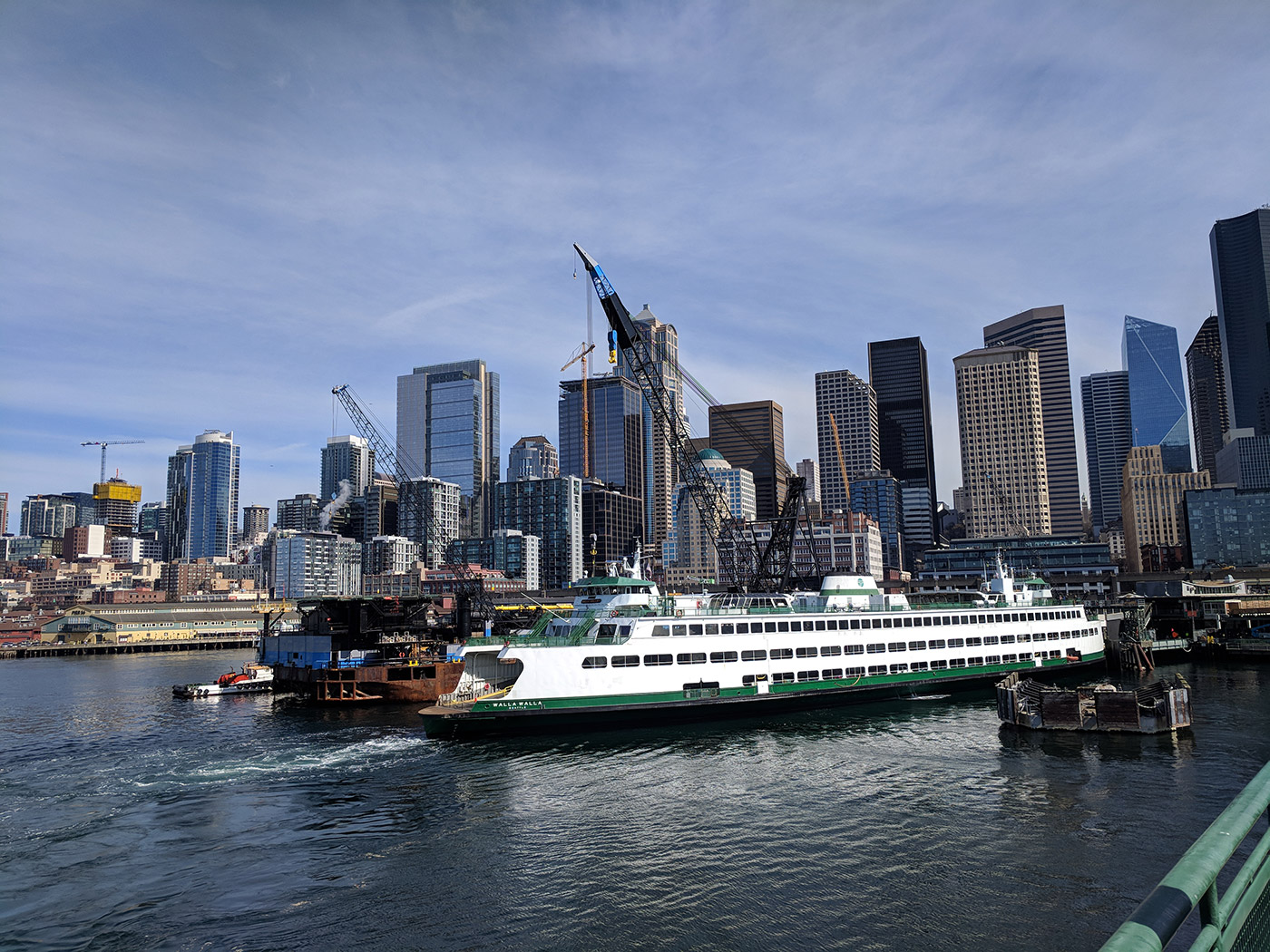 View of Seattle from the Bainbridge Island Ferry. Photo by John Sherwood.

I took time off during a work-related trip to the Seattle area in late March to carve out a few more ski days for the season. Having never skied in this region, I was surprised to learn that Washington State didn’t have any mega resorts. Since I did not want to drive five hours to get to Whistler Blackomb in Canada, I narrowed my choices to Stevens Pass or Crystal — two medium-sized mountains catering mainly to weekenders. I ended up choosing Crystal mainly because of the promise of seeing Mount Rainier in all of its winter glory. Crystal did not disappoint. 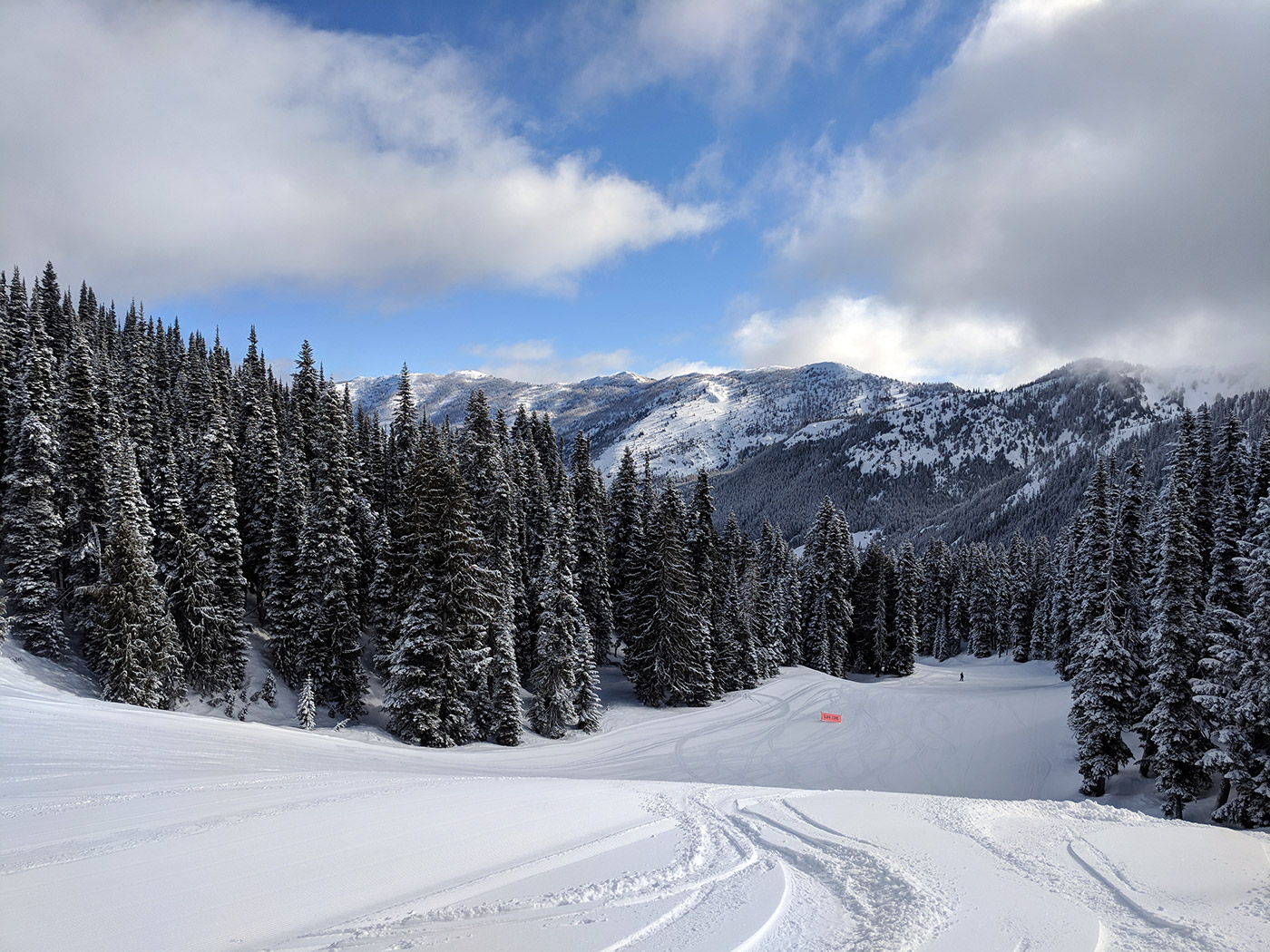 At an hour and forty minutes from SeaTac airport, Crystal is close enough to the Seattle metro area to be visited in a day. I chose to stay three days midweek at the Crystal Chalets condominiums — an older development within walking distance of the base area. In good conditions, the drive is a snap but it can be more challenging in the heavy snow conditions often prevalent in the region. For those who do not wish to drive, bus options are listed on the resort web site.

Crystal Mountain has 2,600 acres of terrain and nine lifts, including an 8-person gondola and three high-speed detachable chairs. 11% of its 57 trails are rated for beginners, 54% for intermediates, and 35% for experts. The mountain boasts a 3,100 foot total vertical and the Mount Rainier gondola offers 2,456 feet of continuous lift-serviced vertical. It’s a big area acreage-wise and much of its terrain is in-bounds, off-piste. Experts could easily ski several weeks here and not experience all of its major lines.

For upper intermediates and advanced skiers like me, the marked blue square terrain also offers a fair bit of challenge and variety, especially late season. I found that the best snow could be found off the Forest Queen Express (between the elevations of 5,103 and 6,250 feet). The elevation of those trails and shade from conifers kept these runs in the best shape for much of the day. I particularly enjoyed Queens, Downhill, and Mr. Magoo. Queens is one of the best green circle cruisers I have ever skied — a beautiful trail similar in some respects to Sterling at Stowe. Downhill follows the fall line and offers some nice consistent pitch with one steepish headwall towards the end of the trail. Mr. Magoo is quirky like the cartoon character with varied terrain, and interesting double fall lines. It literally has some trompe l’oeil features that thrill young and old alike. 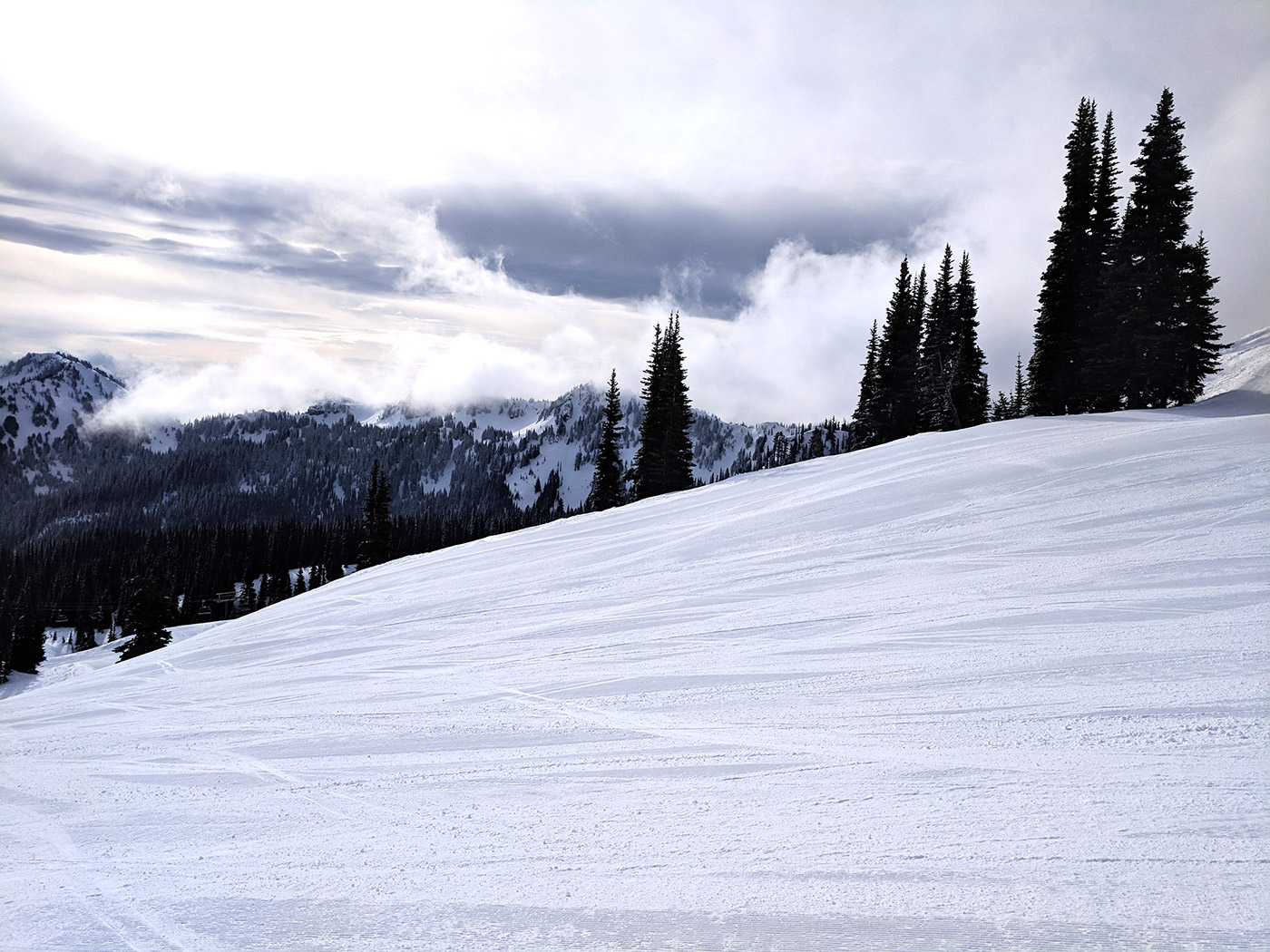 Trails on the lower mountain served by the Chinook Express and Quicksilver were generally icy in the morning but softened up nicely towards the afternoon, allowing for some longer runs from the top station of Forest Queen or the Rainier Express all the way to the bottom. “I love the crud,” one skier shouted as he smashed his way down Lower Arwine’s. Spring skiing on a coastal range inevitably means “variable” snow, so you gotta take what you can get and love it all. What the snow often lacked in quality, it more than made up for in coverage — virtually the entire mountain was open, both on and off piste.

One of Crystal’s great strengths is that it offers skiing for all ability levels. In addition to the Queens run mentioned above, beginners will enjoy Quicksilver and Tinkerbell — two confidence building green trails running from the Quicksilver top station to the base. There’s also a fabulous learning area near the base. I would have no problem taking a “never ever” to Crystal to learn to ski.

“How is the top?” an older couple asked me on the lift. “It’s a bit icy,” I replied. “I think we will stick to Forest Queen,” they responded, “My husband is still recovering from an injury.” The summit terrain serviced by the Rainier Express and the gondola requires a bit more ability than the Forrest Queen blues, but one is rewarded for the extra effort with jaw-dropping views of one of America’s grandest peaks, the 14,411-foot-tall Mount Rainier. 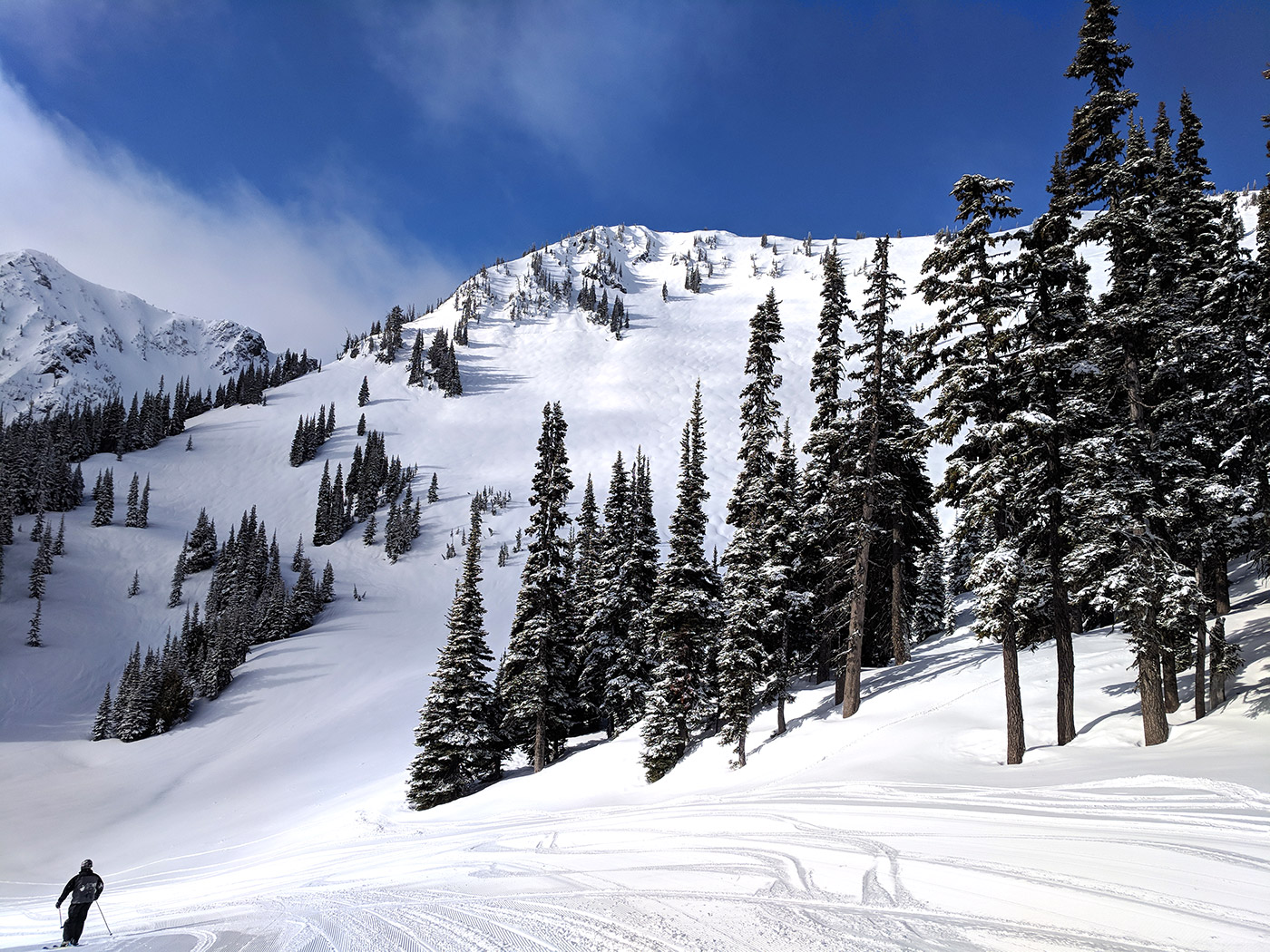 The easiest way down is Lucky Shot, a blue square with one rather steep headwall that can be bypassed via a cat track. The first headwall of Green Valley is even steeper, albeit fairly short. Much of the rest of the terrain from the top is black diamond or harder. The higher ability level demanded by the summit trails did not bother me but lack of signage was a problem, especially in low visibility conditions. It’s very easy to get into some pretty extreme terrain simply because of poor signage. By extreme, I mean cliffs, invisible rocks, gullies, and tree wells. The next time I visit, I will definitely hire an instructor to help me navigate some of the more advanced terrain, especially the huge area serviced by the Northway double. Sadly, hard snow conditions above 6,500 feet and wind holds for the upper mountain lifts kept me from accessing Northway this trip. Chair 6 terrain is all double black and above my level.

The local vibe at Crystal definitely stands out as another strong point. Altera recently purchased the place and has plans to transform the place into a true destination resort, but for now day tripping locals predominate. Weekends can be crowded but midweek is paradise. I never waited for a lift and enjoyed huge, European style trails and bowls devoid of people. I ate lunch each day at the Campbell Basin, a newish lodge at the top station of Forest Queen with high ceilings and attractive furnishings. On warmer afternoons, it was fun to sit around the fire pit after skiing and on colder days, visit the Snorting Elk pub — one of North America’s premier aprÃ¨s ski scenes. Most of the visitors I ran across were families and college students enjoying spring break. “Smells like Teen Spirit,” to quote Seattle’s late grunge rock king, Kurt Cobain. 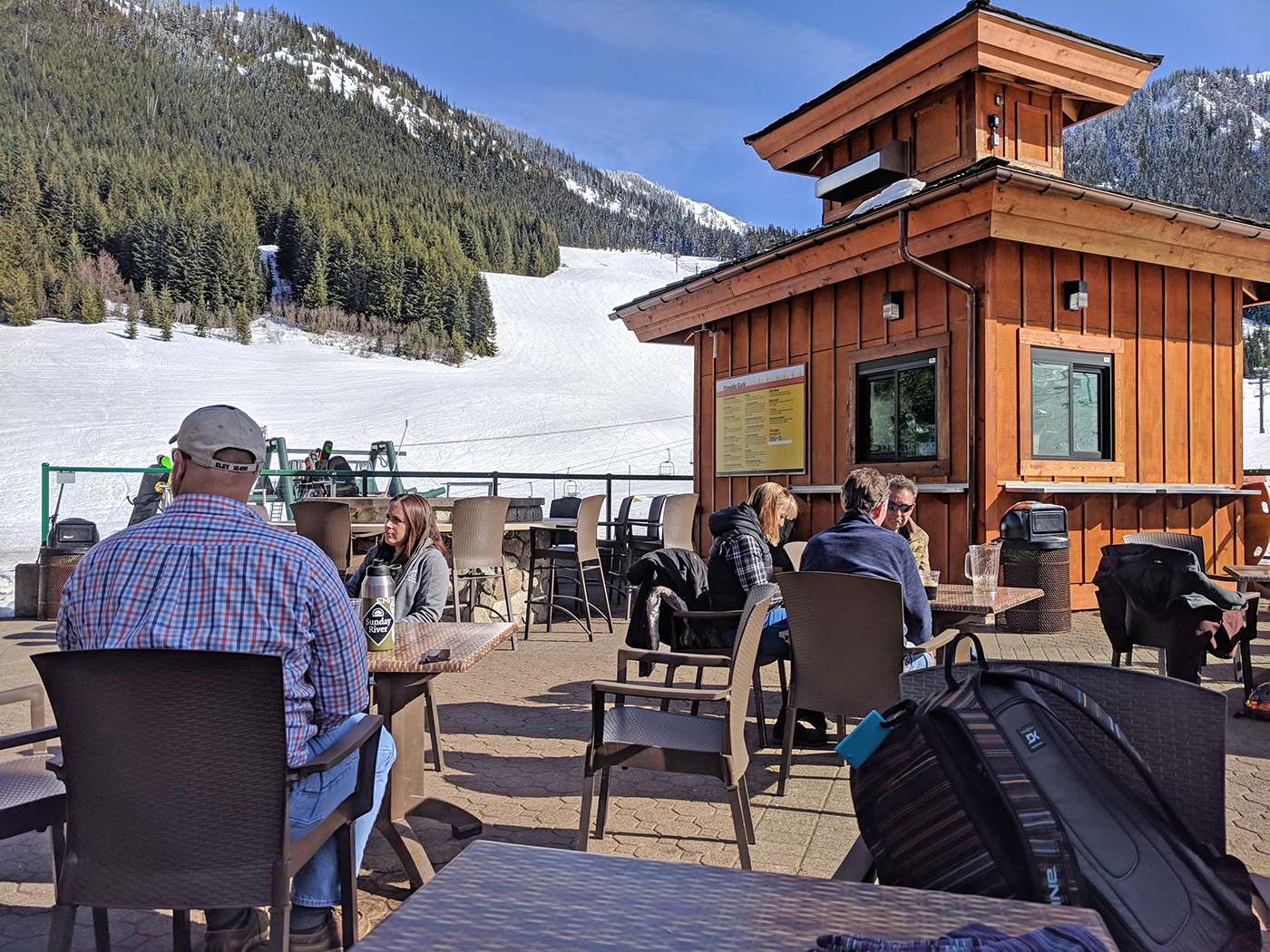 Base area near fire pit. Photo by John Sherwood.

So is this mountain a possible destination for skiers from the DC area? For experts and confident intermediates, I would say yes under midwinter conditions after a decent storm cycle. United and Alaska airlines offer a variety of relatively inexpensive non-stop flights to Seattle, making it easier and quicker to get to than many two-flight destinations in the west. Lift ticket prices are also a veritable bargain compared to many other western destinations: I paid just $99 for a three-day ticket! A hotel room at Greenwater, 38 minutes away, can be rented for $80 per night; or better yet, rent a camper van and park in one of the designated camper lots with the locals and their lovable mountain dogs.

Caveats for Crystal include heavy, wet maritime snow; lack of slope side lodging; few food choices and other amenities near the mountain (the nearest larger grocery store is in Enumclaw 42 miles away); and a difficult mountain to navigate for newbies. With that said, the beauty of the place will take your breath away and local vibe will warm your soul.

Crystal is amazing. It is big mountian skiing close to a major city. So glad to have skied there many times while living in the Seattle area.

Just slow down on the way there....got a ticket in a little village speed trap on there way there one morning. The cop pulled over fives cars in a row and gave us all tickets....ouch

John  that was awesome.  Several  years ago I also extended a work tip to ski Stephens Pass and Crystal.  I  LOVED Crystal.  I had better luck with the snow and the only thing dodgy was lower Northway. Otherwise, I settled into lapping Green Valley. I remember it so well. Drop into the bowl skiers right, ride out onto the high ridge, steep drop left into widely spaced trees, glide over to a cornice lip, turn right and drop into a forested bowl, then a couple of rollers, and down to the lift base. So good. Infiinite number of lines. I  shall return.  Thanks for the reminder.