Over forty inches of snow fell during the week we visited Snowbasin. It wasn’t typical Utah “blower” powder, but it was still soft, playful, and forgiving. For the first time in my skiing career, I experienced four back-to-back powder days at a western resort — an ideal opportunity to improve my often lacking powder skills. 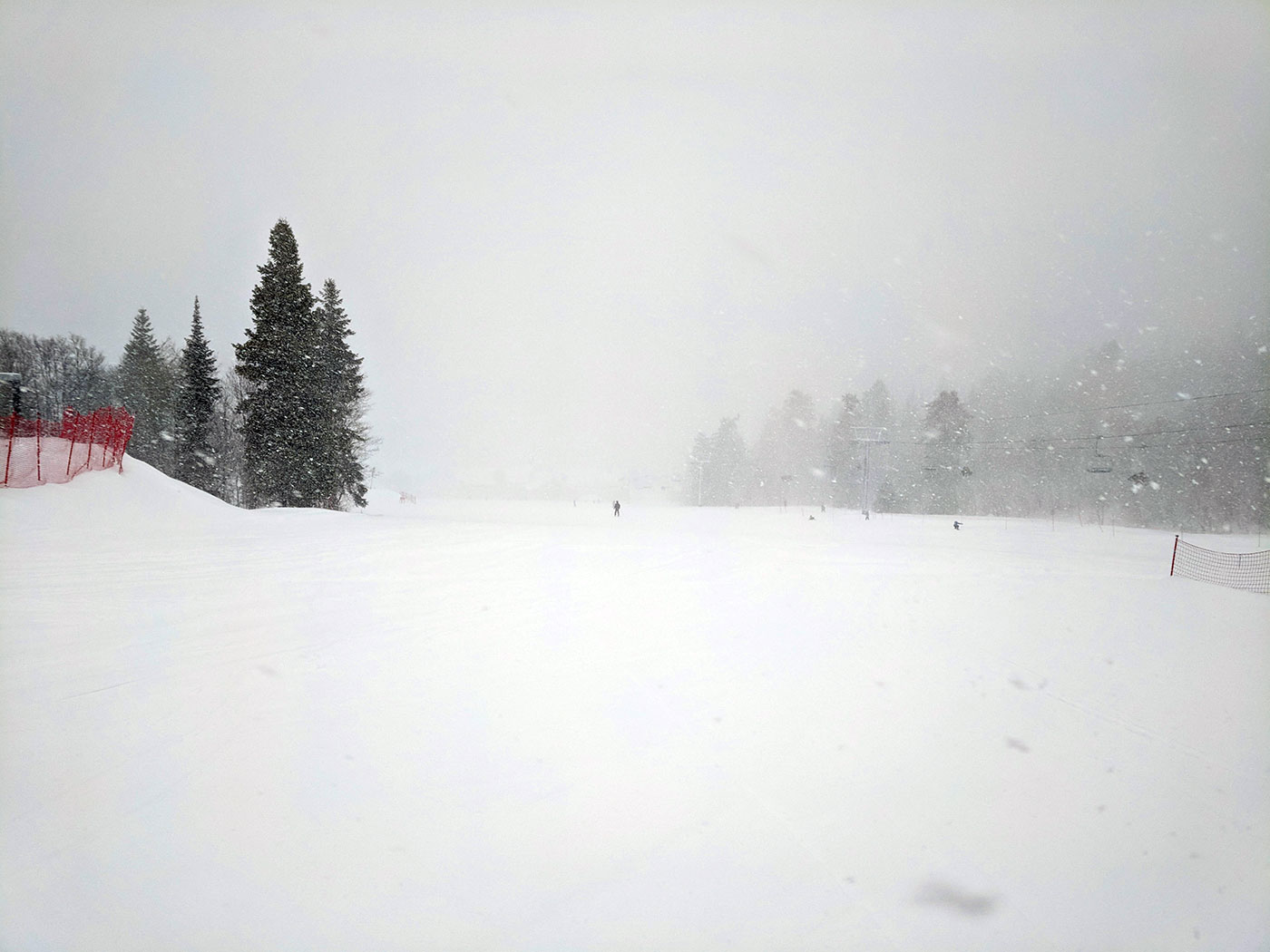 This was my sixth trip to Snowbasin. It’s a five star resort in every respect except one: no slopeside or base village lodging. The closest accommodation can be found in Huntsville and Mountain Green — both about ten miles from the base of the resort. We always stay in Ogden because it’s not much further and offers many more services. On this trip, we chose an Airbnb on the South Ogden bench. Drive time was approximately 29 minutes. The beautifully appointed two bedroom, in-law style apartment attached to a larger residence cost just $75 per night and included a full kitchen, fast internet, and its own laundry facilities.

We love Utah in general and Snowbasin in particular for a variety of reasons. Direct Delta flights from National Airport allow us to get to Salt Lake City in approximately four hours and from the airport, Ogden is just a 38-minute drive. We like Snowbasin because of its big vertical, ample terrain, and first-rate services. On this trip, we rented demo skis at the Grizzly Center. This not only spared us the hassle of schlepping skis to and from our car every day but also allowed us to choose different skis depending on conditions. For me, the Nordic Navigator 90s worked the best. I ski everything up through single black and these skis enabled me to easily float on the powder yet also negotiate tracked out areas, bumps, cement, and high-traffic groomers. It’s a great West Coast all-mountain ski. 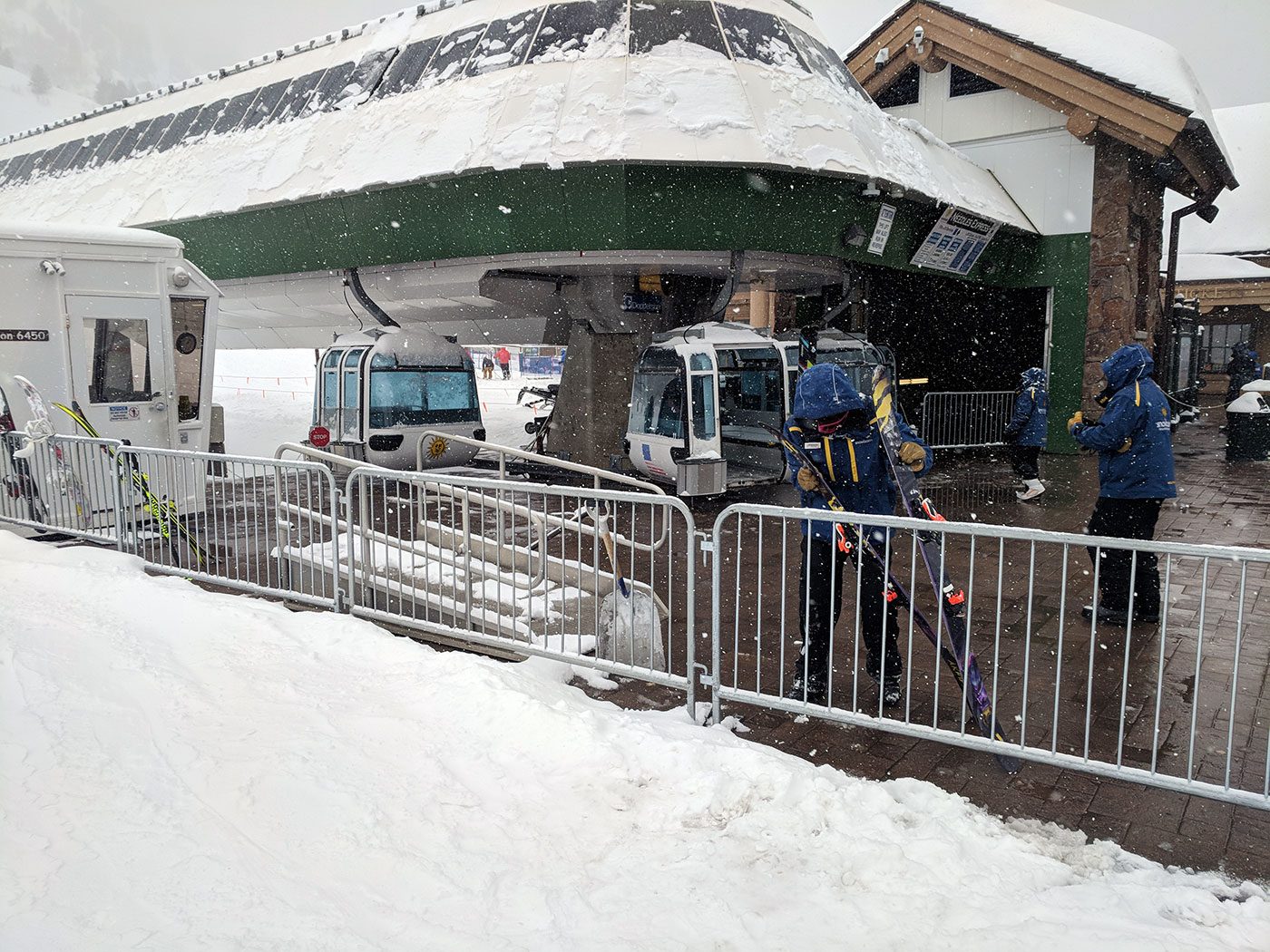 Since I am not the most confident powder skier, I generally stuck to blue squares for storm riding. Snowbasin recently improved and widened the Ogden Road down from John Paul lodge and we found this trail to be a blast when ungroomed and loaded up with new snow. Its rolling nature gave me a chance to play on moderately steep areas but with the security of knowing that flat run-outs often followed the steeper dips. The John Paul high-speed, detachable quad offers access to runs covering 2,472 feet of vertical with no lines.

For the stormy days, we also enjoyed skiing the blue trails on the Middle Bowl, using the old Middle Bowl triple to avoid the Needles gondola lines and higher traffic on the lower mountain. My one regret for this trip was never making it over to Strawberry, which only opened briefly during our stay on a very low visibility day. The Strawberry saddle acts as a wind accelerator and the resort simply cannot open the gondola there on breezy days. In the future, Snowbasin hopes to solve this problem by installing a new chairlift running from just below the current Strawberry base to the Strawberry traverse. It’s desperately needed. On Friday, one of the only days we saw sun, a variety of factors created a bottleneck at the Needles gondola: a race at the Wildcat Bowl; a cold day in the teens; the closure of the Middle Bowl triple due to a mechanical issue; and the Strawberry gondola, due to wind. We avoided the long lines at Needles by skiing chairs the entire day — mainly the Porcupine triple and John Paul. Entrance to Bear Springs, which runs from the top of the Becker Lift to Strawberry. The Strawberry Express lift frequently closes on windy days. Photo by John Sherwood.

A revelation for this trip is that the best powder skiing is on low visibility storm days. There were never any lines and untracked snow could be found in ample quantities on every run. “Free refills” of snow kept everything fresh the entire day. The quiet and serenity of skiing in blizzard conditions in the Wasatch mountains stands out as one of the best memories of the trip.

Another pleasant surprise was the new high-speed, detachable 6-pack serving the Wildcat Bowl. Not only does it offer 1,290 feet of vertical but it makes several excellent trails much easier to ski, especially midweek when the old Wildcat triple rarely ran. Our favorite is the Wildcat Bowl itself — a massive bowl that narrows into a half-pipe style gully. It’s a wonderful, European style area perfect for confident intermediates. 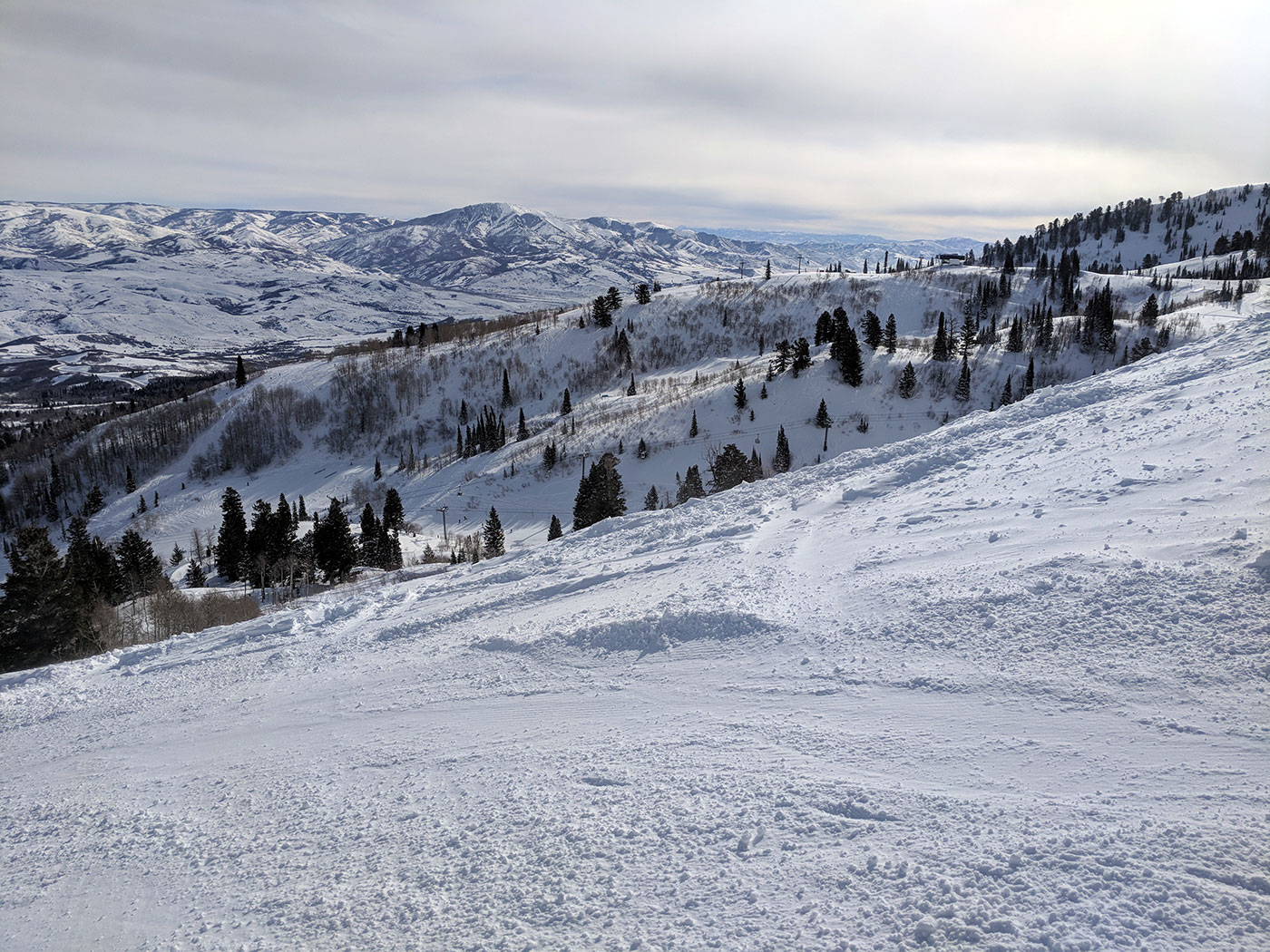 On nearly every lift ride, I was asked, “Where are you from?” When I replied, “Arlington, Virginia,” the response was always, “Thank you for coming; enjoy your visit; but don’t tell anyone else about it.” Locals who ski Snowbasin desperately want the place to remain a locals’ secret. To me, that’s unrealistic. The resort cannot maintain its handsome lodges, first-rate snowmaking, and high-speed lifts without destination skiers. During our stay, the resort announced that it would be joining Epic Pass for next season — an e-mail blast proclamation met with groans at the Needles Lodge. “That’s going to bring people from Park City,” one woman remarked. “More crowds,” said another. “Why are we joining the evil empire?” a third asked. A fourth blamed the new general manager, Davy Ratchford, who used to work for Vail prior to joining Snowbasin.

For me and other destination skiers, the new Epic alliance could be a game changer. The pass covers most resorts on my fly-to destination short list — Stowe, Snowbasin, and the Arlberg — plus a variety of places I hope to ski in the near future including Okemo, Sunapee, Kirkwood/Heavenly, Whistler, Stevens Pass, and Vail/Beaver. If I could just carve out enough ski days from my work schedule to justify the “all you can eat” pass, it could easily become my ticket to paradise.

My wife’s birthday fell during one of the days of our visit. To celebrate, we splurged on a special treat: Belgian waffles at the John Paul Lodge. The food services at Snowbasin are a cut above your average ski lodge fare. In addition to Belgian waffles, the resort serves restaurant quality food in all of its cafeterias plus waiter service at Cinnabar. On Tuesdays, Cinnabar offers a “Dining Discovery Experience” featuring international cuisine. During our visit, we tried the Asian Fusion menu, which featured Korean lamb loin, spring rolls, and curry prawns. Excellent and reasonably priced! On Friday, we split a fish and chips entree at the bar. 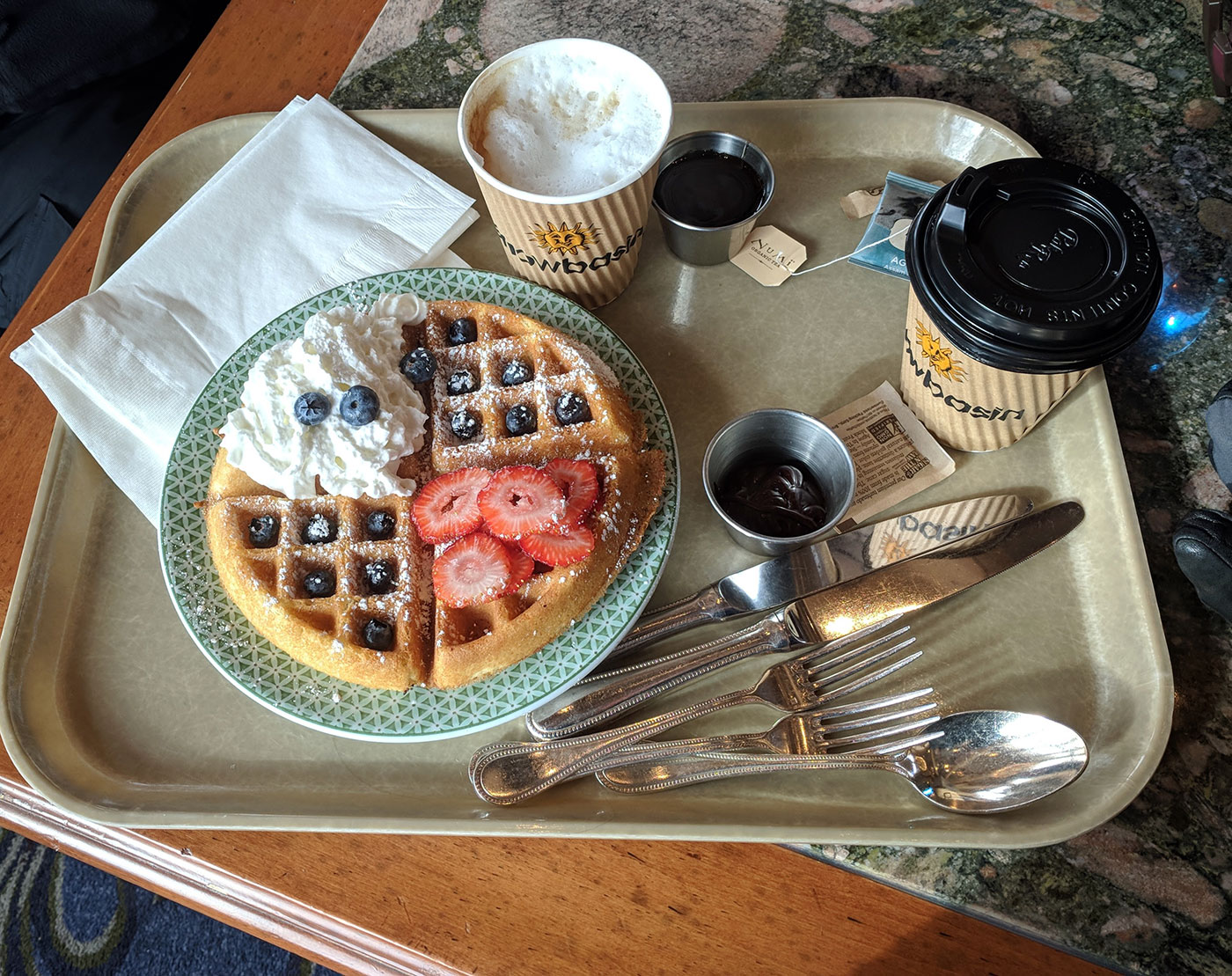 During our week at Snowbasin, the Little Cottonwood Canyon road to Alta and Snowbird closed on several mornings due to high snow and avalanche hazards. By contrast, the access road to Snowbasin, built for the 2002 winter Olympics, remained open the entire week. This broad boulevard gently rises to the base of the resort at moderate grades. Even in stormy weather, it’s generally safe for travel with an all-wheel drive vehicle. The road helped us to ski six straight days from bell to bell even during the worst weather. It partly makes up for lack of slopeside lodging. Ample parking should allow the resort to easily absorb additional skiers from the new Epic venture and if the Strawberry issue can be solved, skiers will spread out over the expanse of the resort’s 3,000 acres of terrain, thus assuring a first-rate snow experience. I can’t wait to return.

Good report!  Utah is having a strong winter.  Catching a big storm cycle like that has its pros and cons, but it's an adventure well worth experiencing.

John, Really enjoyed your report.  I have been to Snowbason twice in the 50+/- years I have enjoyed skiing in Utah. Snowbasin is certainly a “classy” ski experience, a la Deer Valley.  I can understand your euphoria over the continuous daily powder dump.  During my first visit to Utah, at Old Park City, in the early 1970s, I experienced similar powder conditions.  Once I learned the necessary technique to facilitate true “floating” in the many feet of new snow I was hooked on what is the ultimate ski experience, but you have to be willing to let yourself go and trust the resistance of the snow and the terrain to help keep you in control, floating down the slope at a speed that is sometimes beyond one’s comfort level.  Unfortunately this a rare experience and I have long ago lost what ever positive ability I had to stay upright and comfortable in bottomless powder.  I smile when I hear my fellow Mid-Atlantic plankers alk about “powder” skiing after a storm leaves a foot or less of new snow.  While such conditions are pleasant and certainly different from skiing on hardpack, the euphoria from powder skiing in bottomless powder without the skis touching the snow base, is a thrill not to be forgotten.  Now at age 78 (in two days) I do not have the physical abilities or stamina nor requisite mentality to “aim ”˜em”downhill and trust in the equipment to get me to the bottom safely.  As we age,  falls become more more of a mental and physical issue.  But, despite aging, six broken ribs a couple of years back after being clobbered by an out-of-control clueless snowboarder, a difficult right knee last season I am still on boards, perhaps much more cautiously and on less demanding terrain, but still enjoying my love for this wonderful sport! I hope to get in several days in WV next week.  My first days out this year were only fair; I proved to myself at the Arizona Snow Bowl that I still could point them downhill, but that my nervousness about crowded slopes and poor conditioning, especially at 12,000 feet altitude were items still needing to be overcome.  WISH ME GOOD LUCK!!