Contrasts abound in the Mid-Atlantic. Last week, a Polar Vortex plunged temperatures across much of the nation, including the Mid-Atlantic region. On the first day of February, several inches of natural snow fell, exceeding forecasts. Temperatures dropped to the single digits by Friday night. The next day, temperatures began to climb upwards, and by Sunday, February 3, temperatures shot above 50 degrees Fahrenheit.

I decided to hop on this weather roller coaster, starting at Whitetail Resort on Friday night. After a full day at work, I pointed my car towards I-70 and headed towards Pennsylvania. Light snow accompanied me, but I-70 was in decent shape, thanks to the hard work of snowplows. I pulled into Whitetail’s parking lot around 7 p.m. and purchased a night lift ticket for $29.40 using my Advantage Card. 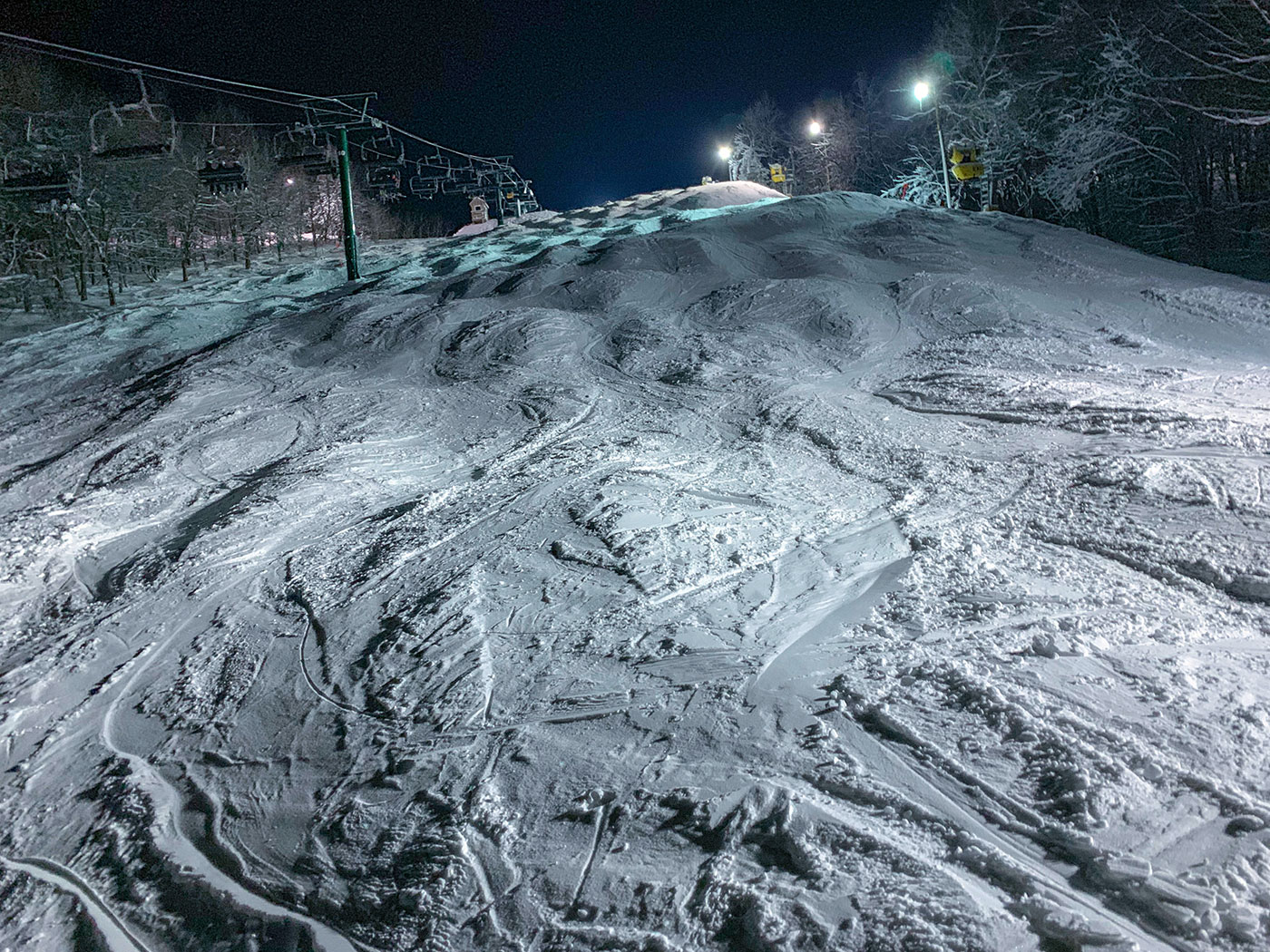 Exhibition had bumped up nicely by Friday evening. Photo by M. Scott Smith.

Whitetail had received several inches of fresh snow throughout the day, on top of voluminous amounts of snow they’ve made on nights throughout the Polar Vortex. Few guests were on the slopes on this frigid night, but they were enjoying great conditions. After a couple intermediate runs off of the Whitetail Express, I dropped into the expert terrain and spent some time on Bold Decision, Exhibition, and Far Side. Moguls had been given time to grow on Exhibition since my visit to Whitetail the prior weekend. 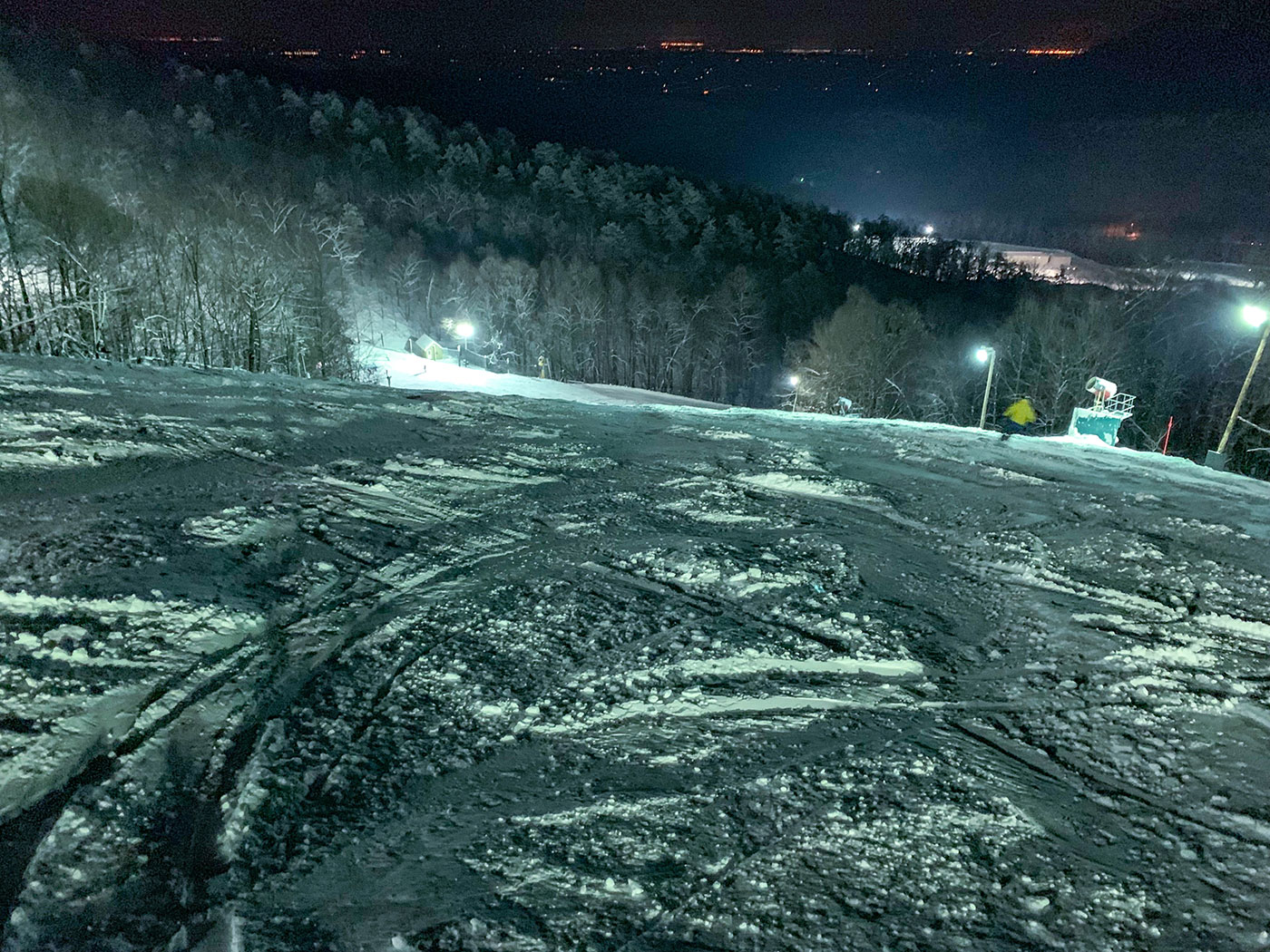 I closed out the evening by making laps off of the Whitetail Express high-speed quad. Although it was quite cold, I did a good job layering and somehow managed to stay warm and comfortable. On my last run, I discovered a pair of skis and poles in the middle of intermediate Fanciful, about halfway down. There was no skier to be found. I’ve seen poles and gloves separated from skiers, but never an entire set of skis, left in a precarious and dangerous position. I called the Ski Patrol so they could investigate. Perhaps someone didn’t realize you’re supposed to return rentals at the base of the mountain, not halfway down.

On Saturday, I contemplated making another trip to the slopes, but knew they would undoubtedly be crowded. So instead, I traded crowds at the ski slopes for crowds in Frederick, Maryland, during Frederick’s annual Fire in Ice event. 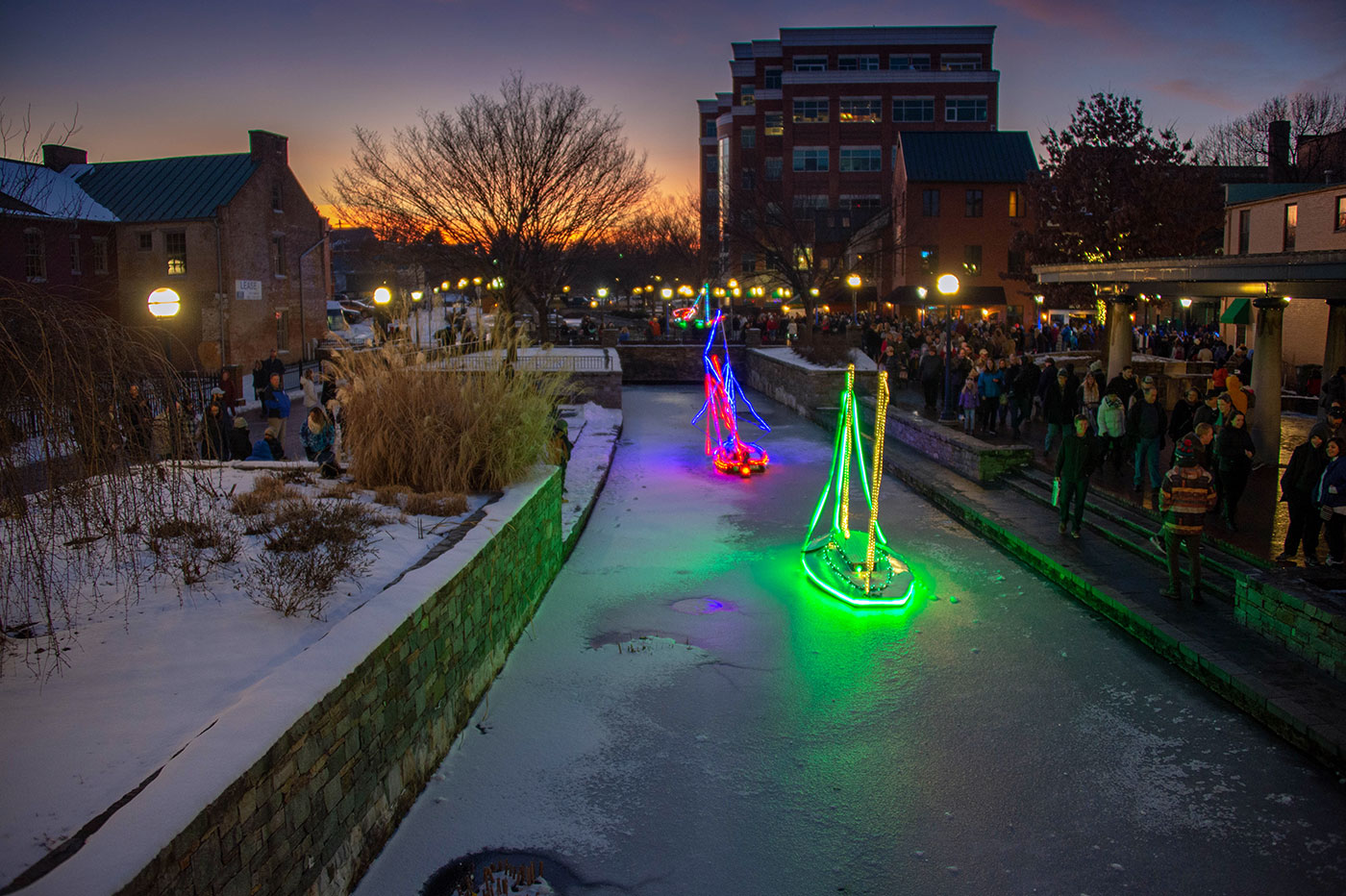 The Fire in Ice event was held in Frederick, Maryland on Saturday, February 2, 2019. Photo by M. Scott Smith.

From DC, you likely pass through Frederick on the way to Whitetail, Liberty Mountain, Seven Springs, Wisp, and other points west. Frederick’s downtown area is worth a stop on the way (or on the way back). An eclectic shopping area lines Carroll Creek (almost like a mini version of San Antonio’s river walk), populated by lots of highly-rated restaurants and interesting shops. During the summer, the creek is a water garden filled with around 4,000 lilies, lotuses, water irises, reeds, rush, and cattail. During the winter, the creek is filled with nine artistic boats. 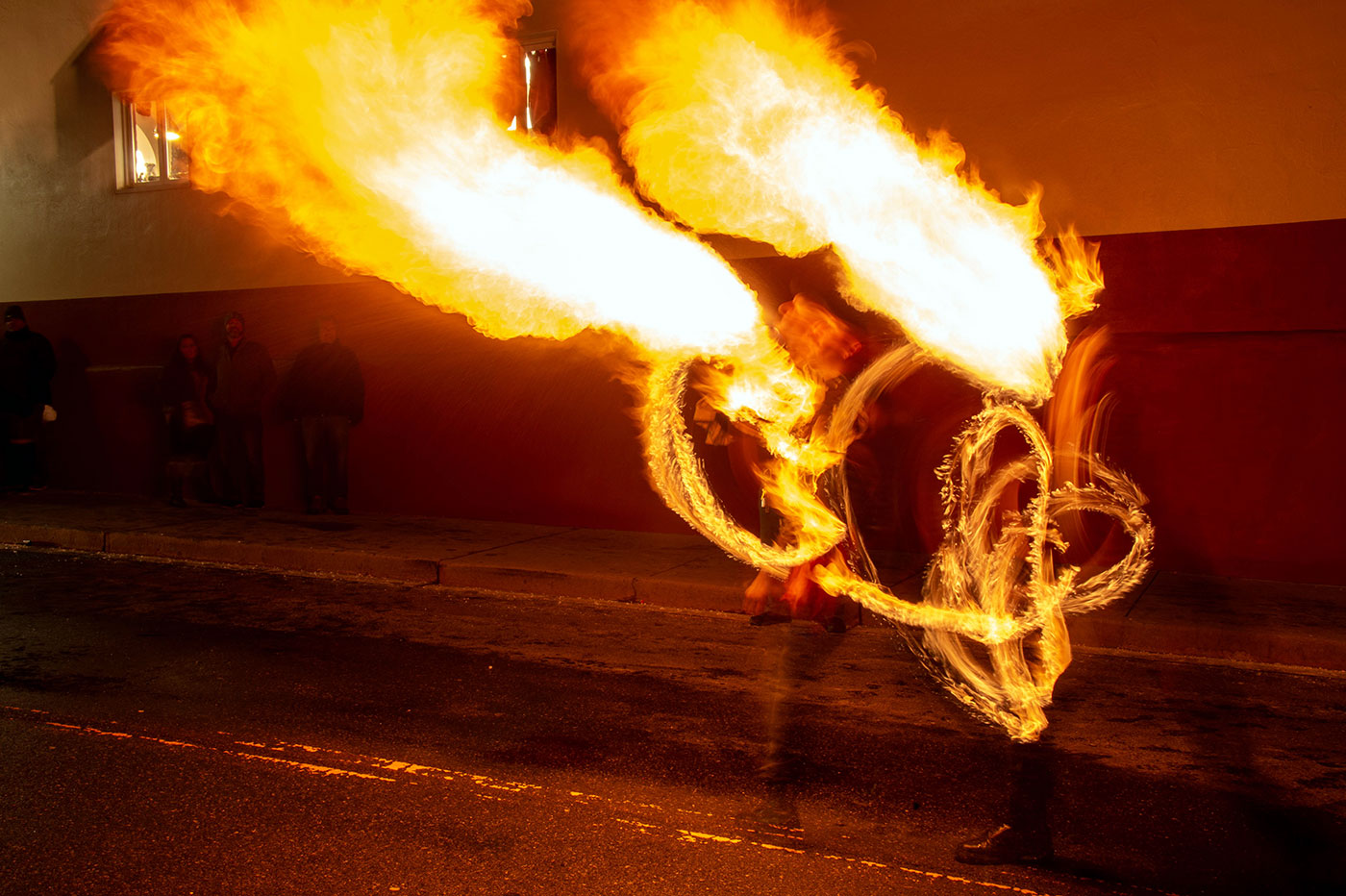 Fire breathing was one of the acts on display at Fire in Ice. Photo by M. Scott Smith.

On Saturday, Frederick held its annual Fire in Ice event, which drew thousands of visitors and featured ice sculptures, music, s’mores, fire dancers, and much more. Crowds showed up in force, making it difficult to find parking, despite multiple parking garages being located in the downtown area. After sitting in gridlocked traffic for about an hour, I finally found one of the last spots remaining on the top deck of the Carroll Creek garage. 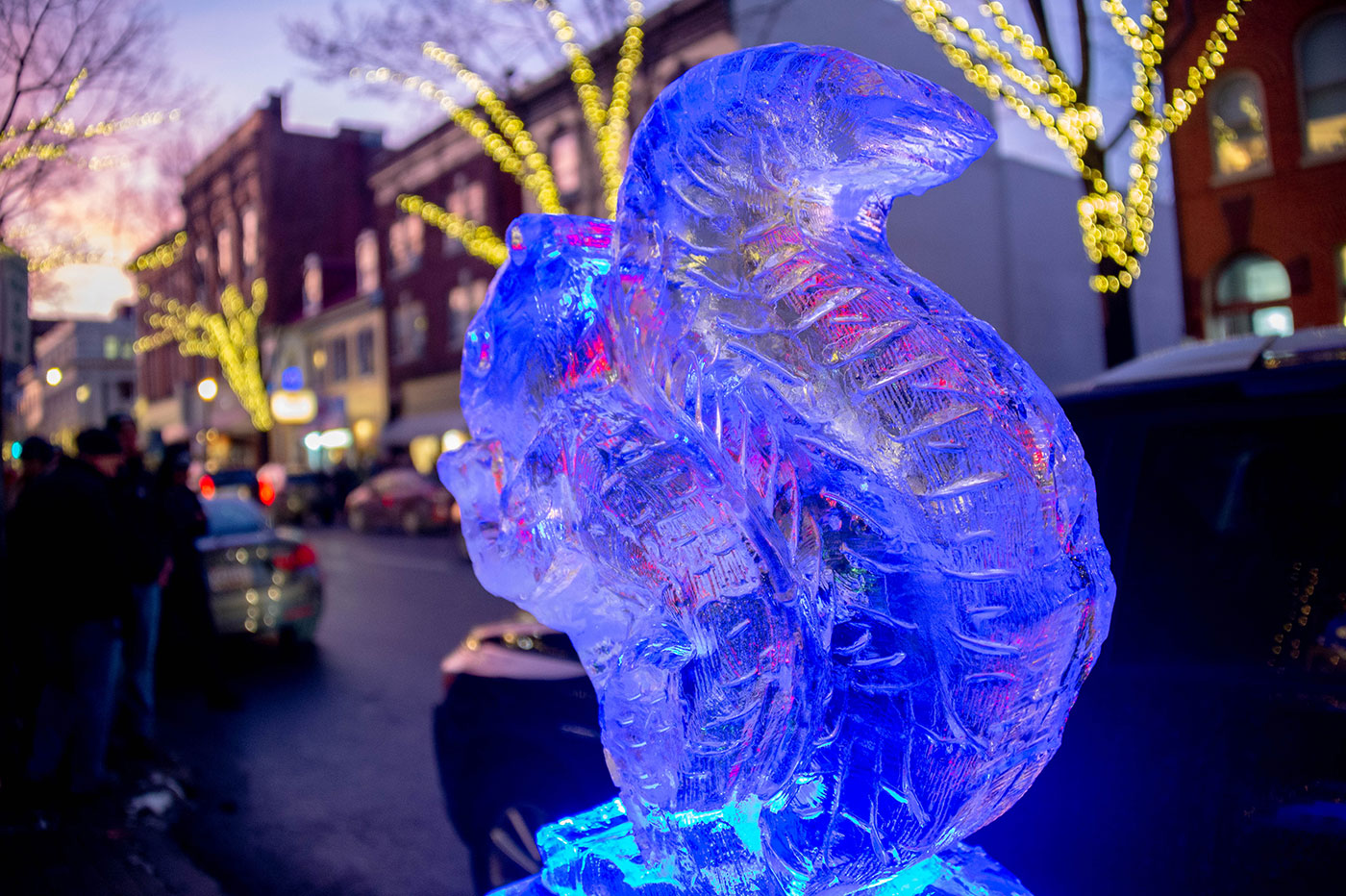 The event was a lot of fun, and provided lots of opportunities to take some nice photos. And unlike the prior night, temperatures weren’t in the single digits — rising to a downright balmy low 30s. 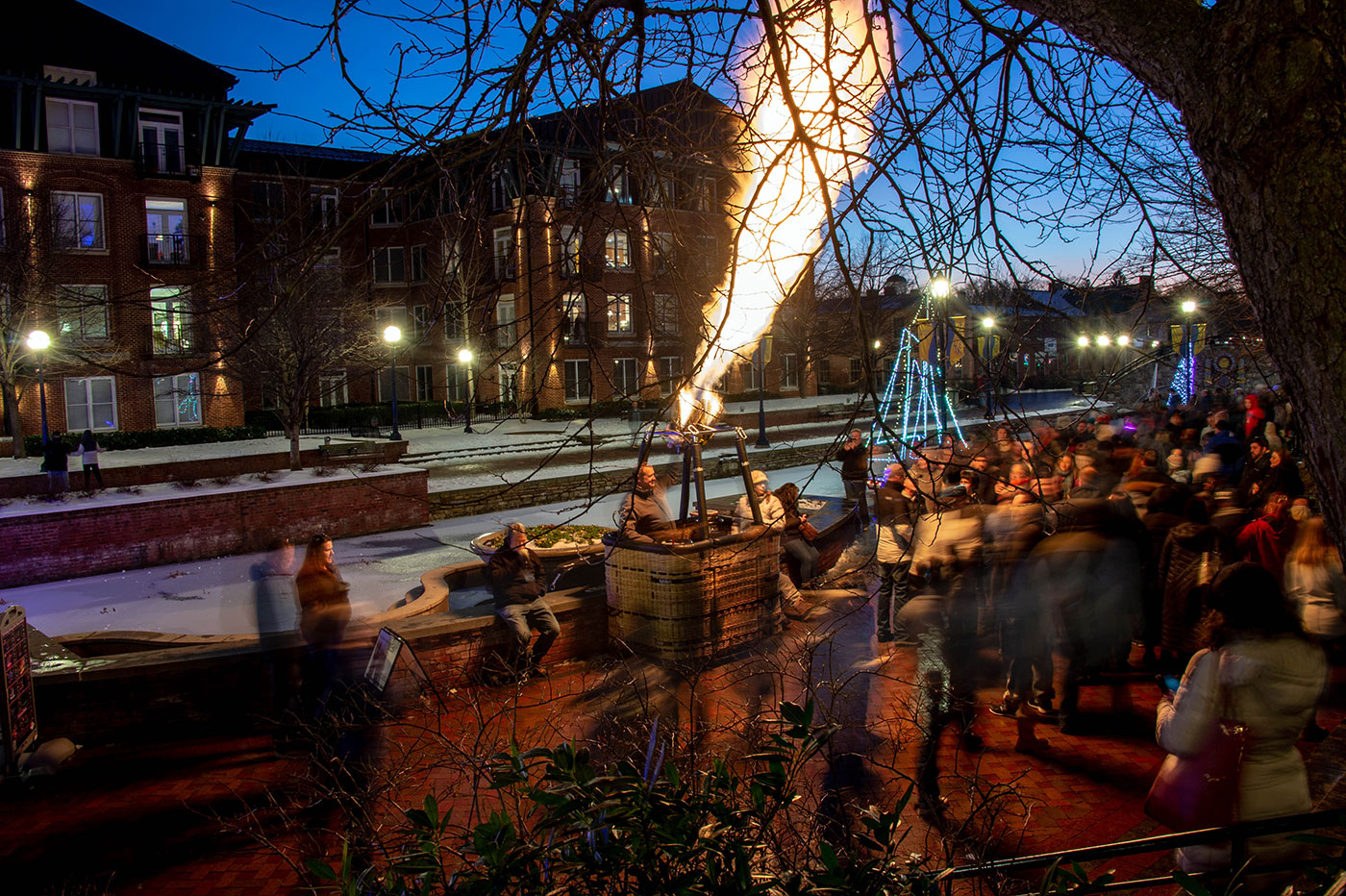 A hot air balloon, minus the balloon part. Photo by M. Scott Smith.

On Sunday, Mother Nature decided to start melting all the nice snow that fell on Friday. Thankfully, there is still plenty of snow left on the slopes, so I decided to head to Liberty Mountain for a late afternoon and early evening of skiing. I heeded advice from DCSki Columnist Matthew Graham: on Super Bowl Sunday, the game acts like a magnet, pulling away skiers and snowboarders from the slopes. Sure enough, by 3:30 p.m., a long line of cars was already leaving Liberty Mountain just as I arrived. 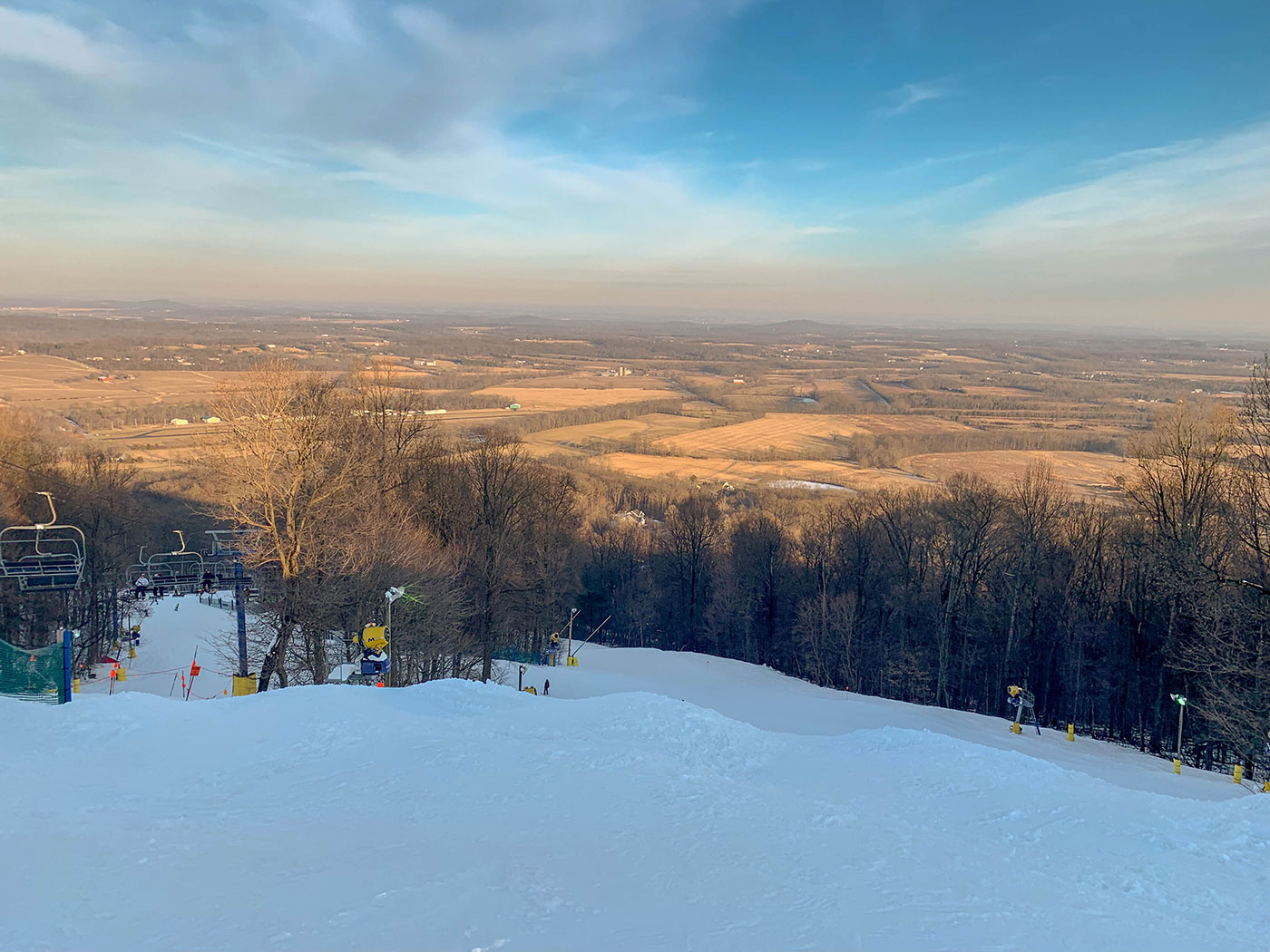 Great views from the top of Liberty Mountain. Photo by M. Scott Smith.

It was warm enough to unzip those under-arm zippers on the ski jacket, but despite the warmup, the snow conditions were excellent. Lots of snow everywhere, and while it was soft, it wasn’t sticky.

This was only my second time to Liberty Mountain, but despite being smaller than Whitetail (my “home” mountain), Liberty is starting to grow on me. I was skiing with friends, which made the slower lifts seem not-so-slow. And while shorter in length and not as wide as the slopes at Whitetail, the trails are more interesting, often meandering their way down the mountain. 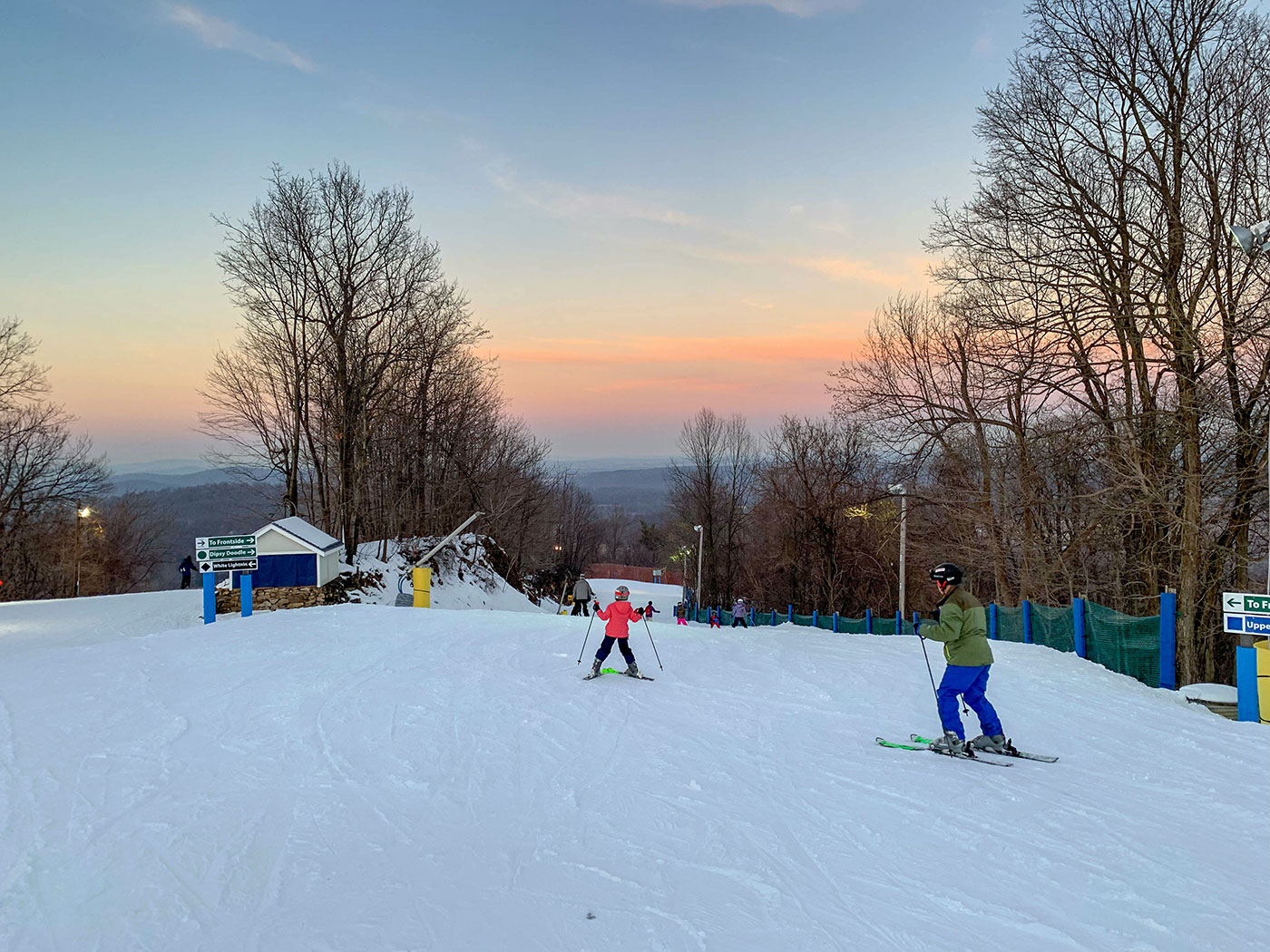 We spent most of our time on the backside of Liberty, alternating between Lower Strata, Lower Eastwind, Lower Ultra, and Heavenly. I made a few runs down double-black diamond Upper Strata, which had some impressive moguls. It’s steep but the steepness only lasts a few turns before transitioning into a mellow intermediate. 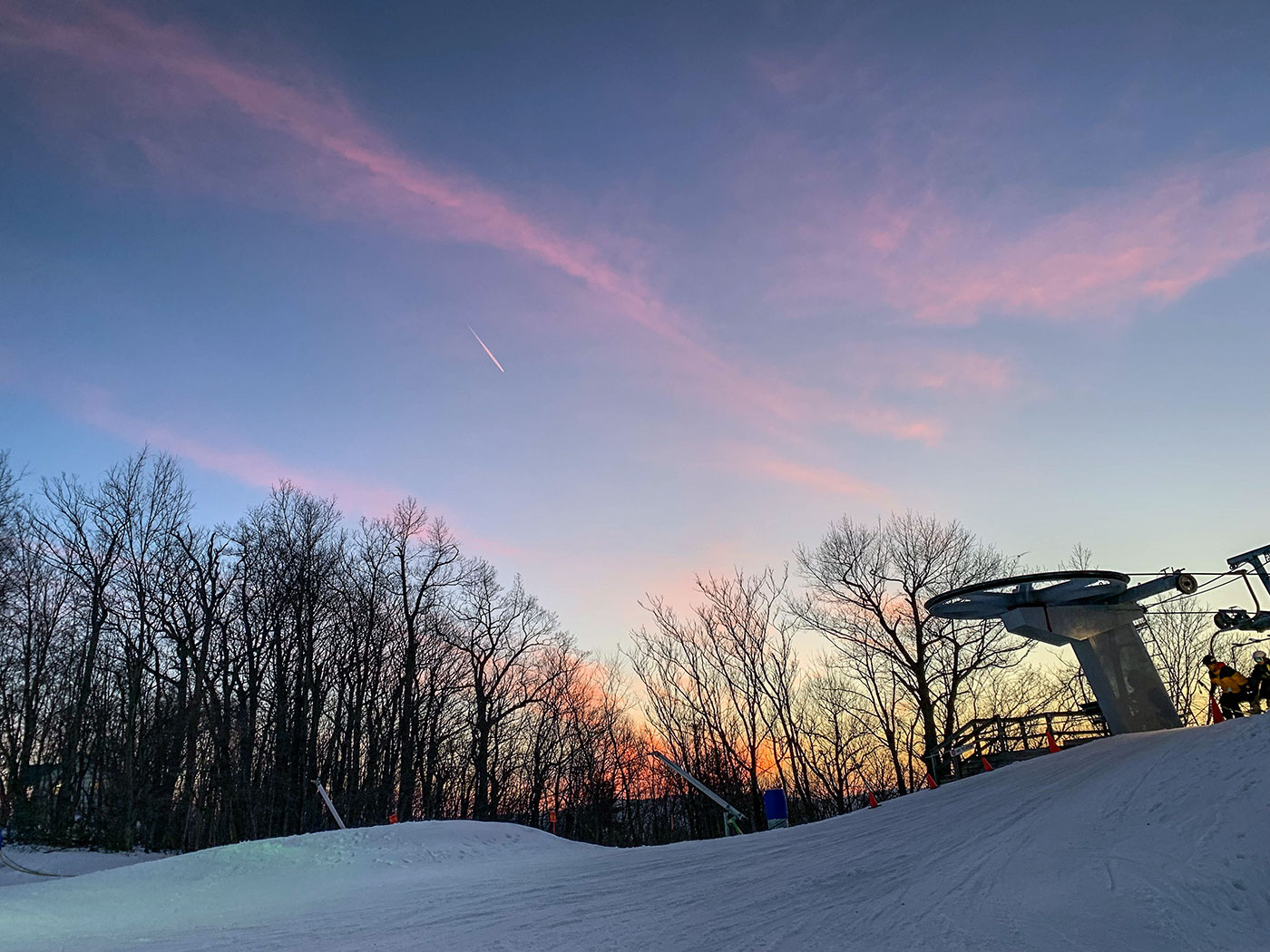 Despite the warmup on Sunday, snow conditions were excellent. Photo by M. Scott Smith.

As the sun began its colorful dip towards the horizon, we spent time on White Lightning, which was in great shape and a lot of fun. By now we had the slope almost entirely to ourselves. 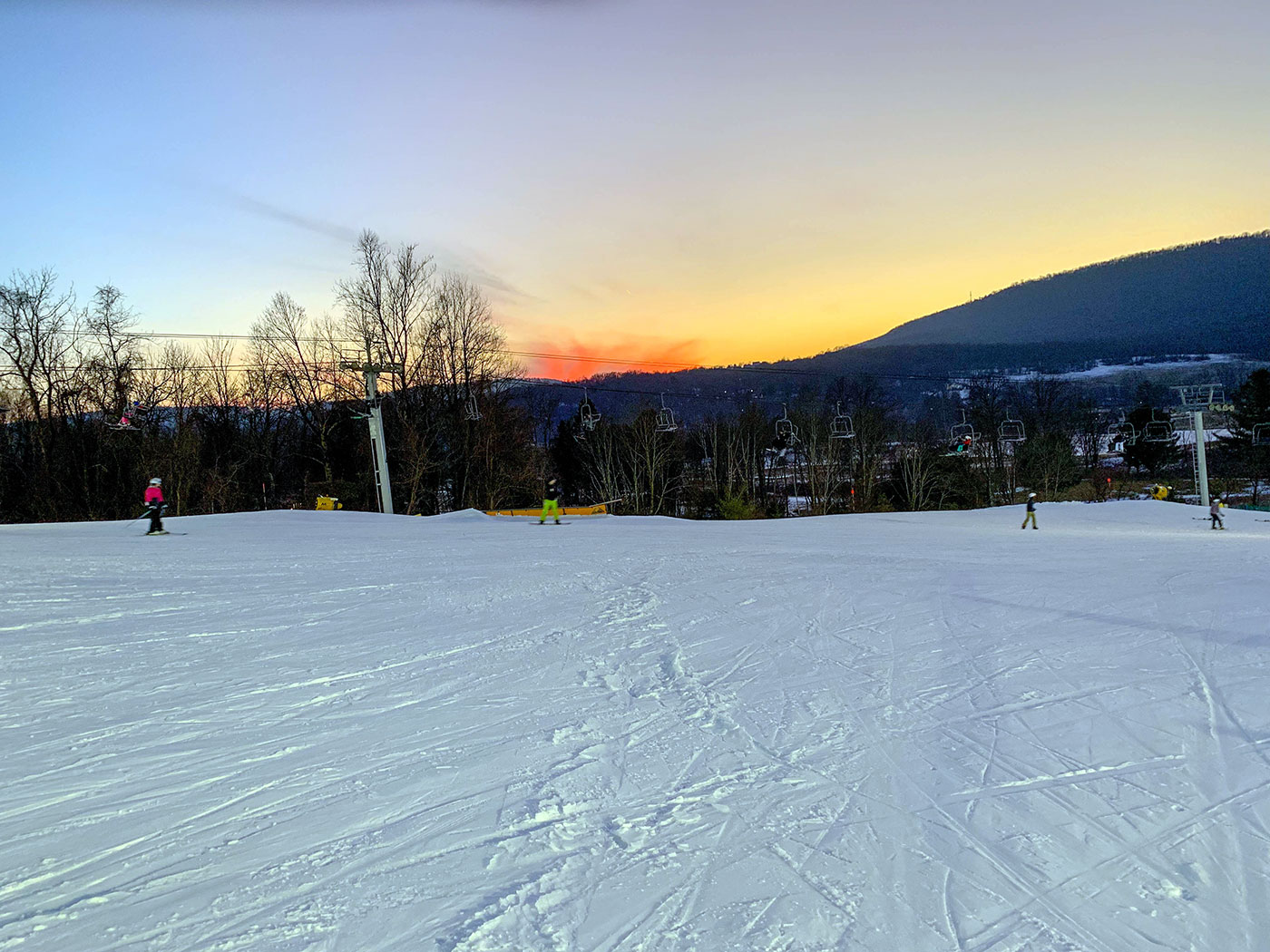 Crowds thinned out by early evening as skiers went home to watch the Super Bowl. Photo by M. Scott Smith.

It was a truly wonderful evening. Great snow, pleasant temperatures, few crowds, great company, great views, and a great sunset. What’s not to like? After saying goodbye to Liberty Mountain, we stopped at Food 101 for dinner, a nice little cafe in downtown Gettysburg. 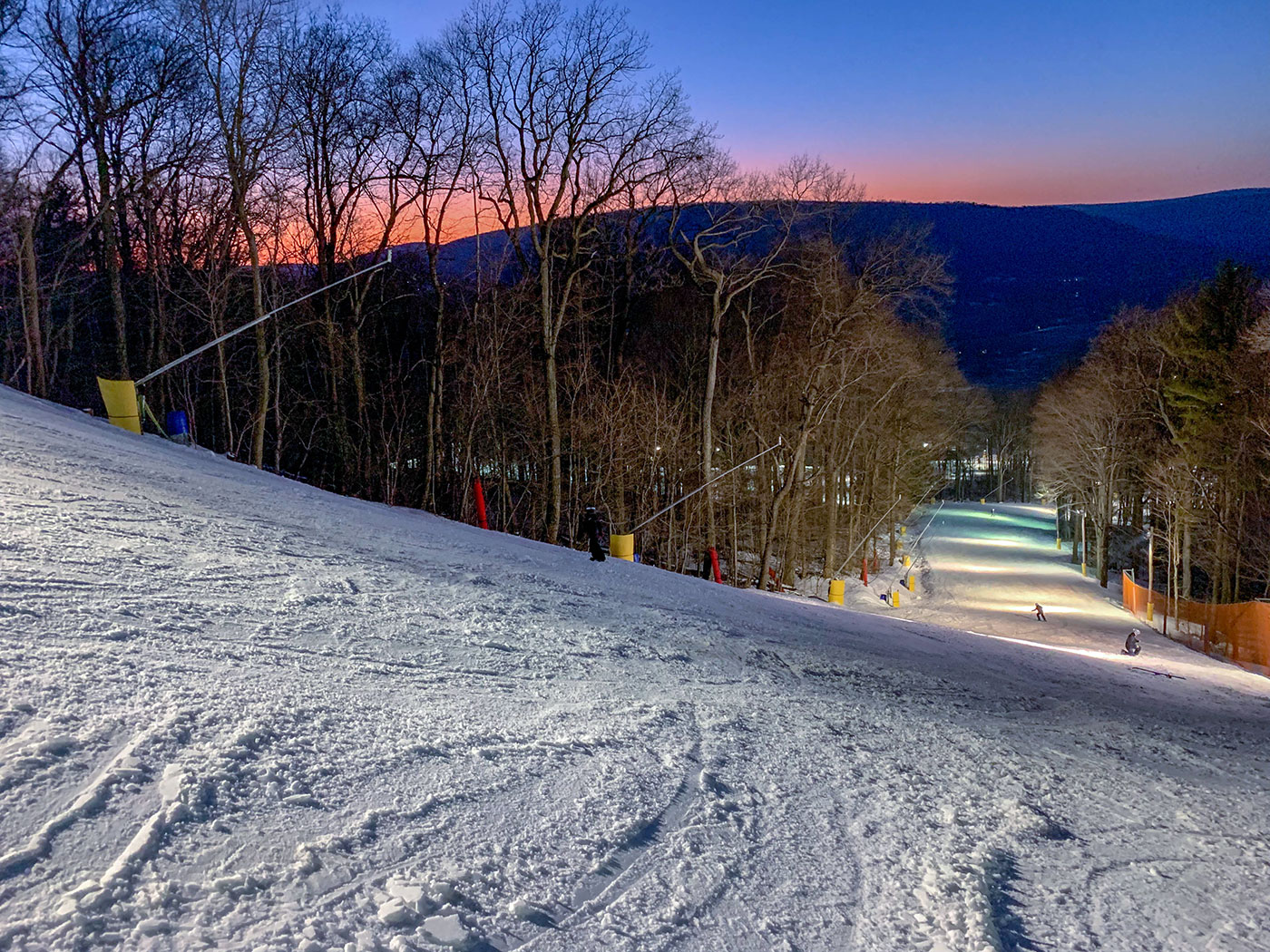 A beautiful sunset closes out the evening at Liberty Mountain Resort. Photo by M. Scott Smith.

Nice report.  It was a prime weekend for mid-Atlantic skiing.  Gosh, your photos really POP!

I hit Roundtop on Sunday and had a similar experience.  Only issue was things started to get icy as the temperature dropped.  Slopes cleared out nicely though.  Didn't have to wait long for a lift, especially once the Super Bowl started.  Lifties were nice and posted scores at the bottom of the lifts.

I always enjoy reading about attractions and events in nearby communities when the article's focus is on skiing.  Well done!  My family has gone to downtown Frederick for their annual Chrustmas festival when the places of worship have open houses featuring music, nativity scenes, belltower tours ... and cookies!  We didn't know about Fire in Ice but will put that on our calendar for next winter.

Liberty and Whitetail are my home areas these days.  (That loyalty may change if Peak Resorts discontinues the senior discount, but that's  a topic for another day.)  Have to agree with what you said in comparing these two mountains' lifts and layouts.  WT provides a greater vert and a faster main lift, while Liberty's meandering layout is considerably more interesting to us wanderers.   Both are well-run with comfortable lodges, and they have the infrastructure and managerial moxie to recover quickly after warm weather.

And JimK is right: your photos are invariably eye-catchers.