Firsthand Report: After the Crowds at Whitetail 1

On Sunday evening, January 27, I decided to make my first turns of the season at Whitetail. Yeah, I’m a bit late to the game, but early season conditions in the Mid-Atlantic were not that compelling.

A pretty spectacular sunset accompanied me as I made my way up I-70 towards the Pennsylvania resort. 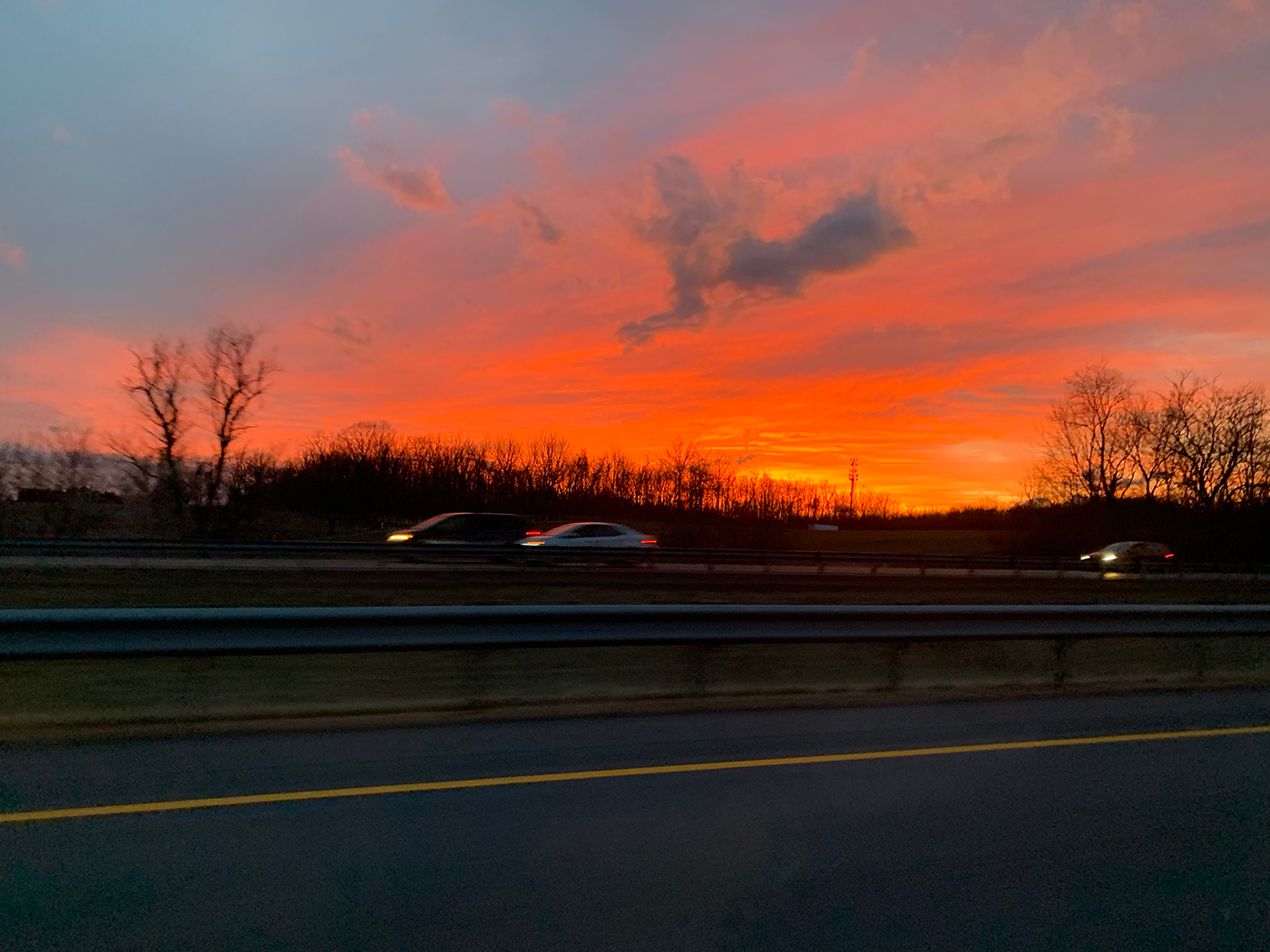 Nice view on the way to the slopes. Photo by M. Scott Smith.

Having checked Whitetail’s webcams periodically over the weekend, I could see that Whitetail had temporarily transformed from a ski resort to a human zoo. It was the first weekend that Whitetail was 100% open, after a slow and warm start to the season. Crowds showed up in force.

As I drove towards the resort, I was happy to see a never-ending stream of cars going in the opposite direction on Blairs Valley Road, away from the resort. As each car passed by me, I thought “one less skier on the slopes.”

When I arrived, there were some cars parked at the furthest edges of the parking lot, proving that Whitetail had a busy day. But I passed those cars and headed to the car lot adjoining the Fallmount trail, and there were plenty of empty parking spots. After parking, I swung by the ticket window, showed my Advantage Card, and purchased a night session (5-10 p.m.) ticket for $29.40. I was on the slopes by 6 p.m.

Normally I start my season on a beginner trail — just in case I somehow completely forgot how to ski during the summer months. But, with more than a couple decades of downhill skiing under my belt, I decided I probably hadn’t forgotten how to ski, and I went straight for the Whitetail Express high-speed quad. A large, empty maze of hardpack snow provided further evidence that Whitetail was overrun with crowds during the day, but they were now gone; I skied/slid right past that and onto the chair. For the entire evening, there was never more than one person in line in front of me, and even that was rare.

After a quick ride to the top of the mountain and a quick re-adjustment of boots (why do ski boots have to be so uncomfortable?), I pointed my skis downhill and attacked Limelight.

The first few turns on Limelight were exciting, because whatever loose snow had been at the very top at the beginning of the day was long gone, leaving behind something between hardpack and ice. Thankfully, the worst was at the top, and the rest of Limelight had stashes of loose snow. I had to be somewhat strategic to avoid patches of ice, but it was a fun trail. 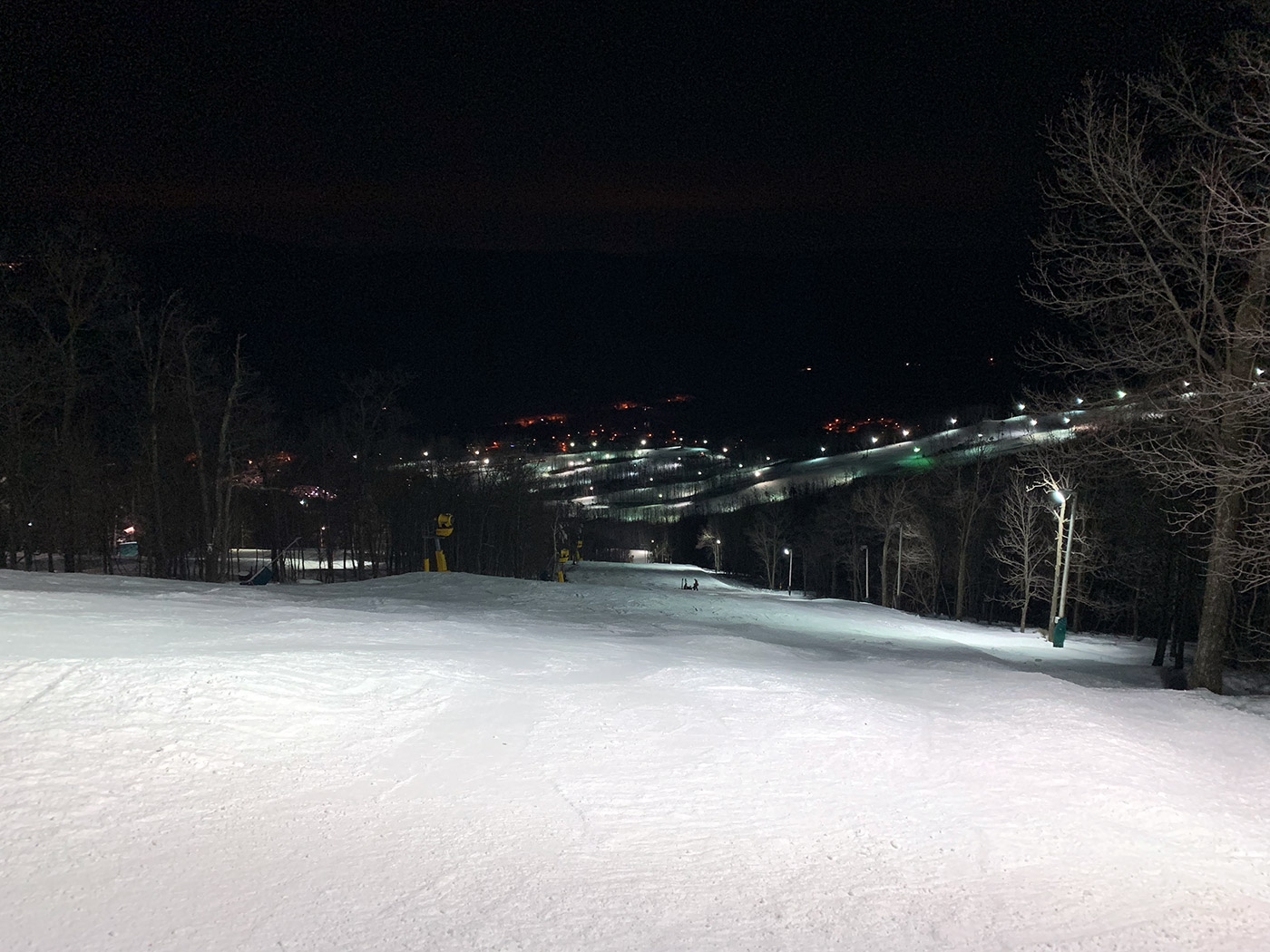 Next up was Upper Angel Drop, which always seems to be the most popular intermediate at Whitetail. Angel Drop was showing its battle scars from a crowded day. Small moguls had formed, rising out of slick hardpack. You could find some loose snow stashes near the edges of the trail, but the scavenger hunt for good snow wasn’t particularly enjoyable, so I exited left to Drop In, heading to Whitetail’s expert terrain and skiing right to a chair on the Expert’s Choice quad. After the leisurely fixed-grip trip up to the top of the mountain, I headed to one of my favorite trails at Whitetail: Far Side.

Far Side is one of the few trails at Whitetail that still has its original, opening-day, old-fashioned snowguns. Most of the rest of the mountain now sparkles with state-of-the-art, computerized TechnoAlpin fan guns, which can magically transform a bare slope into an open slope in a couple of days. Far Side is typically the last slope to open at Whitetail, but despite kickin’ it with some classic snowmaking gear and only having opened a couple days prior, it had great edge-to-edge coverage. That pattern held true across every trail at Whitetail.

This was my second year on a new pair of skis, and due to procrastination on my part, the skis haven’t yet had a single tuneup. After last winter’s epic snow road trip, the bases of my skis had some hard-earned war wounds, courtesy of Sun Valley, Jackson Hole, Aspen Snowmass, Vail, Beaver Creek, Snowbasin, and Deer Valley. Which is to say, they carved about as well as a dull knife in a tree.

Speaking of trees and things you shouldn’t do with them, thanks to recent natural snow, tree skiing at Whitetail was available! (Obligatory note: It is dangerous to leave Whitetail’s groomed slopes and the Ski Patrol certainly frowns on the practice. Your skis are likely to get gouged by the rocky terrain.) 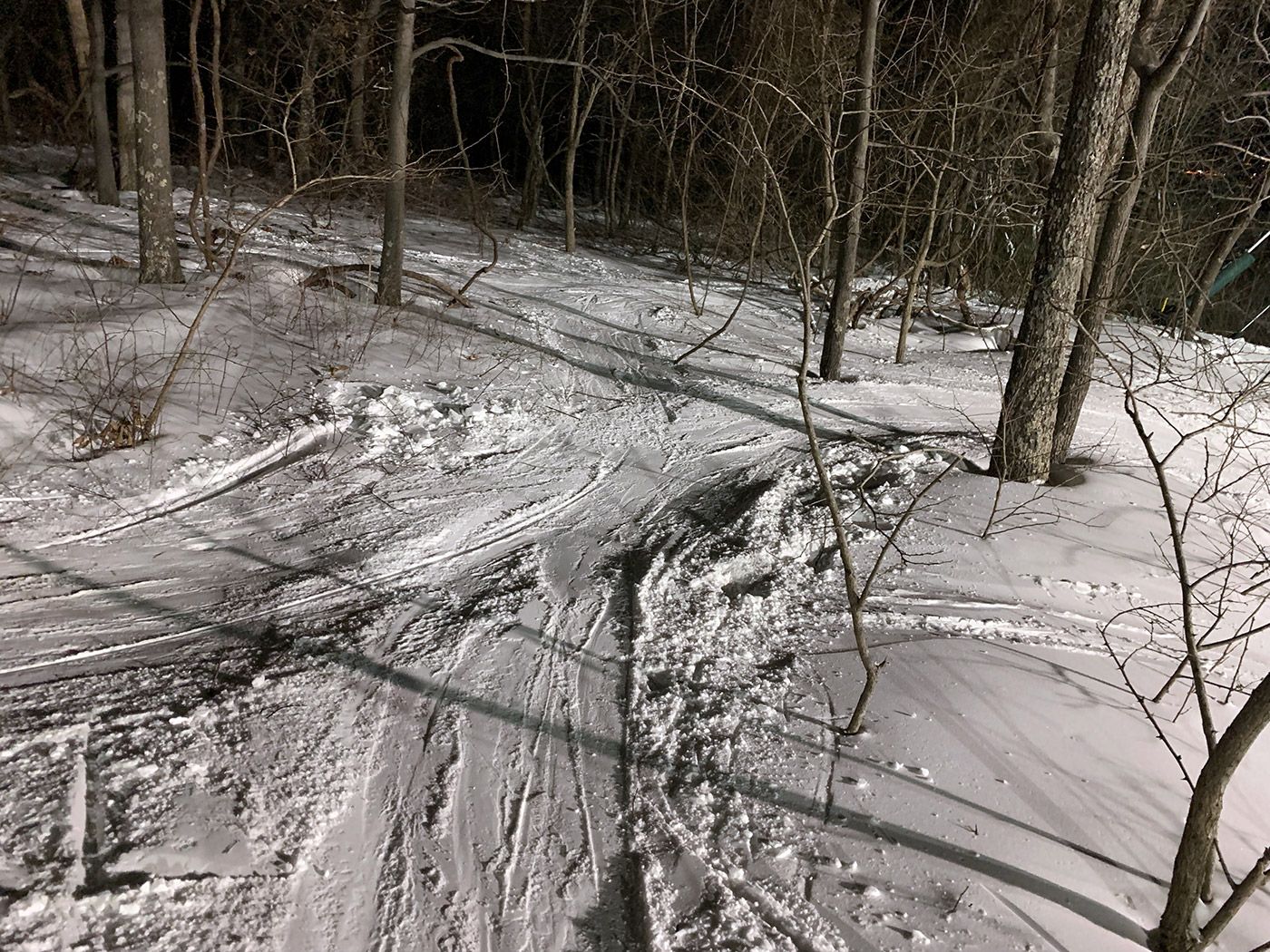 The closest Whitetail gets to gladed skiing. Photo by M. Scott Smith.

“Tree skiing” at Whitetail means that you can occasionally find a path that briefly leaves the trail, skirting around a few trees before rejoining the trail. On Sunday evening, such paths could be found at the top of Far Side and along the right side of Ridge Runner. It looked like some off-the-trail excursions had happened along the rightside of Exhibition, and some skiers had made paths in between some of Whitetail’s intermediates, for example connecting Limelight with Snow Dancer. 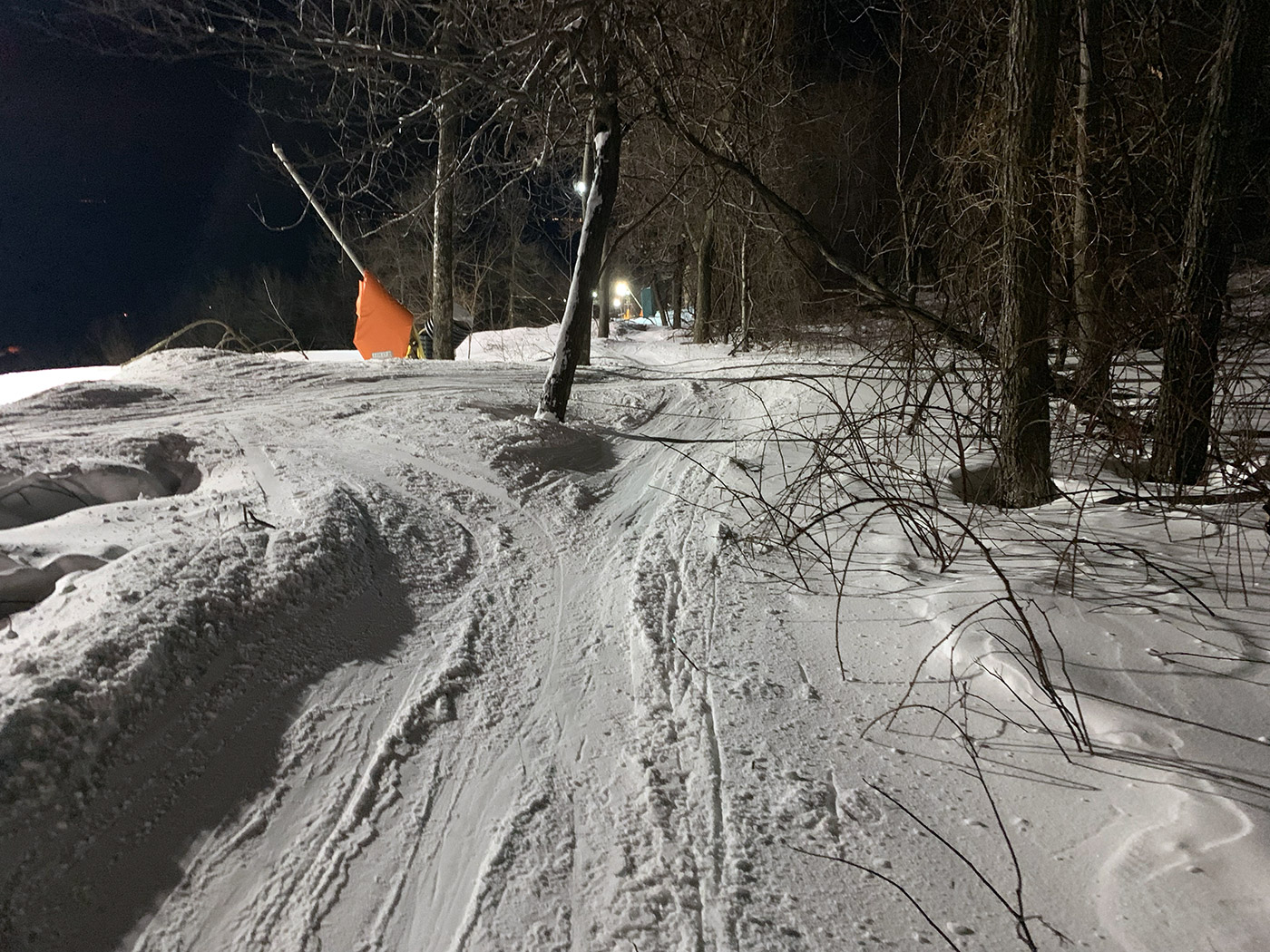 After trip down Far Side — which had great snow until it got slick near the bottom — I took another ride up Expert’s Choice and evaluated my options.

Exhibition had bumped up, and was showing some healthy moguls. There weren’t many people skiing Exhibition. A few skied through the moguls with grace, but most were slowly slip-sliding from one mogul to the next, clearly second-guessing life decisions, and one had decided to walk down, clearly in over his head. In between the moguls you could see glistening hardpack reflecting back the light.

Being the first trip of the season, I decided I would leave it to my left and right knees to work out among themselves whether they were ready to tackle ice-and-moguls. I expected deadlock — assuming my knees would refuse to agree with each other, leading to a prolonged ski shutdown. However, I was surprised when they immediately agreed with each other, choosing not to ski Exhibition but instead to head directly to Bold Decision. Because if Exhibition was icy, there’s no way the steep part of double-black-diamond Bold Decision would also be icy, am I right?

The top part of Bold Decision was in good shape, with plenty of carve-able loose powder.

The steep part of Bold Decision, was, predictably, hardpack, leaving few stashes of powder to turn in and requiring some delicate decision-making on the way down. But, thankfully, the slope was completely empty, so there was no need to contend with a bunch of human obstacles. 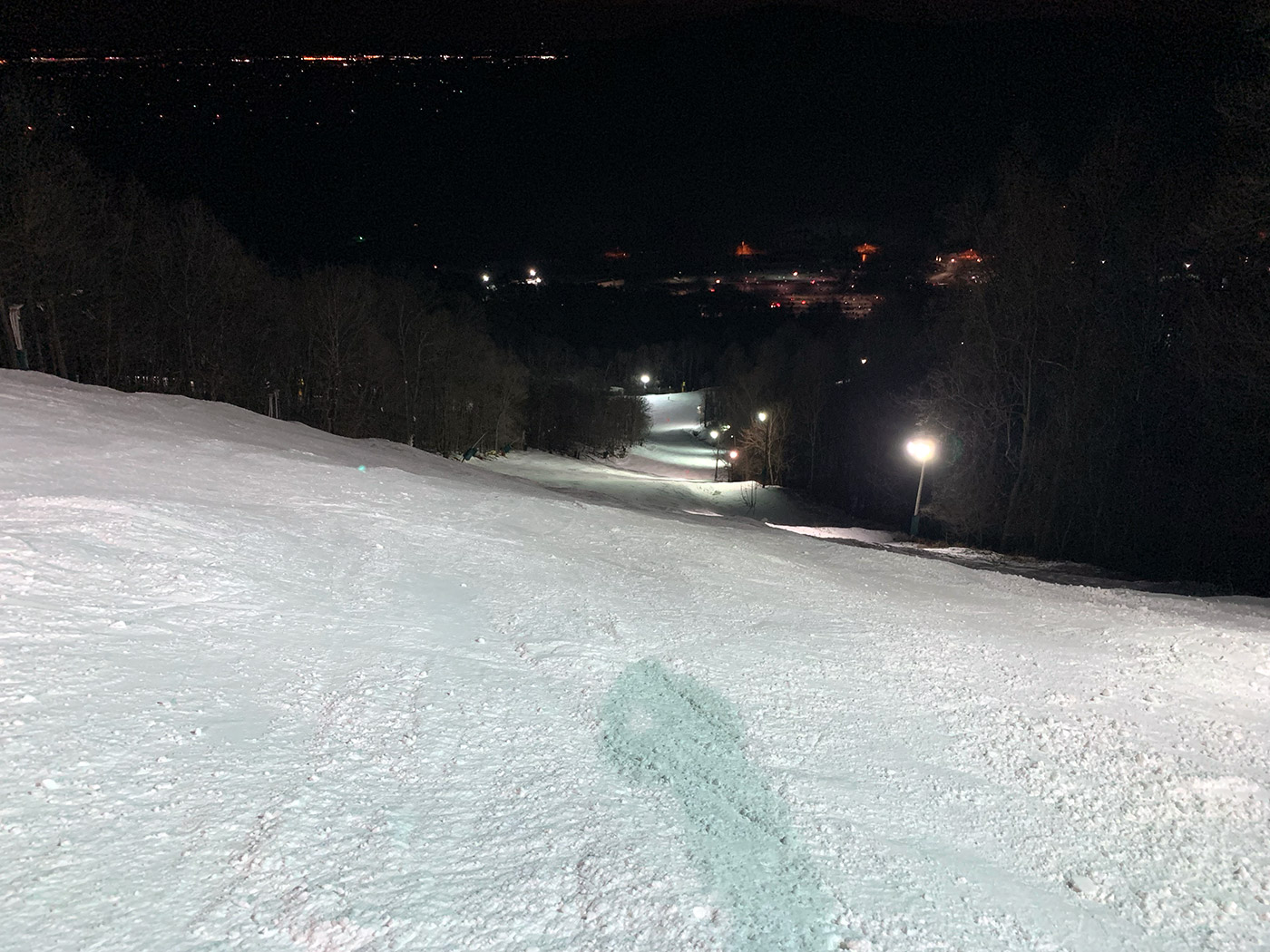 Next I decided to head back to Whitetail’s base area, via Ridge Runner, Upper Angel Drop, and Homerun. Homerun had some fantastic snow on it, somehow avoiding the fate of many slopes which were scraped off with the day’s crowds. At the base, I skied over to the EZ Rider Quad. A glacially-slow ride later (seriously, going from the Whitetail Express to the EZ Rider Quad is like going from a sports car to a tricycle), I skied Sidewinder, flirting with the sloped banks on the left side, an interesting characteristic of Sidewinder that makes it different than the rest of Whitetail’s mostly cookie-cutter, straight-down slopes. 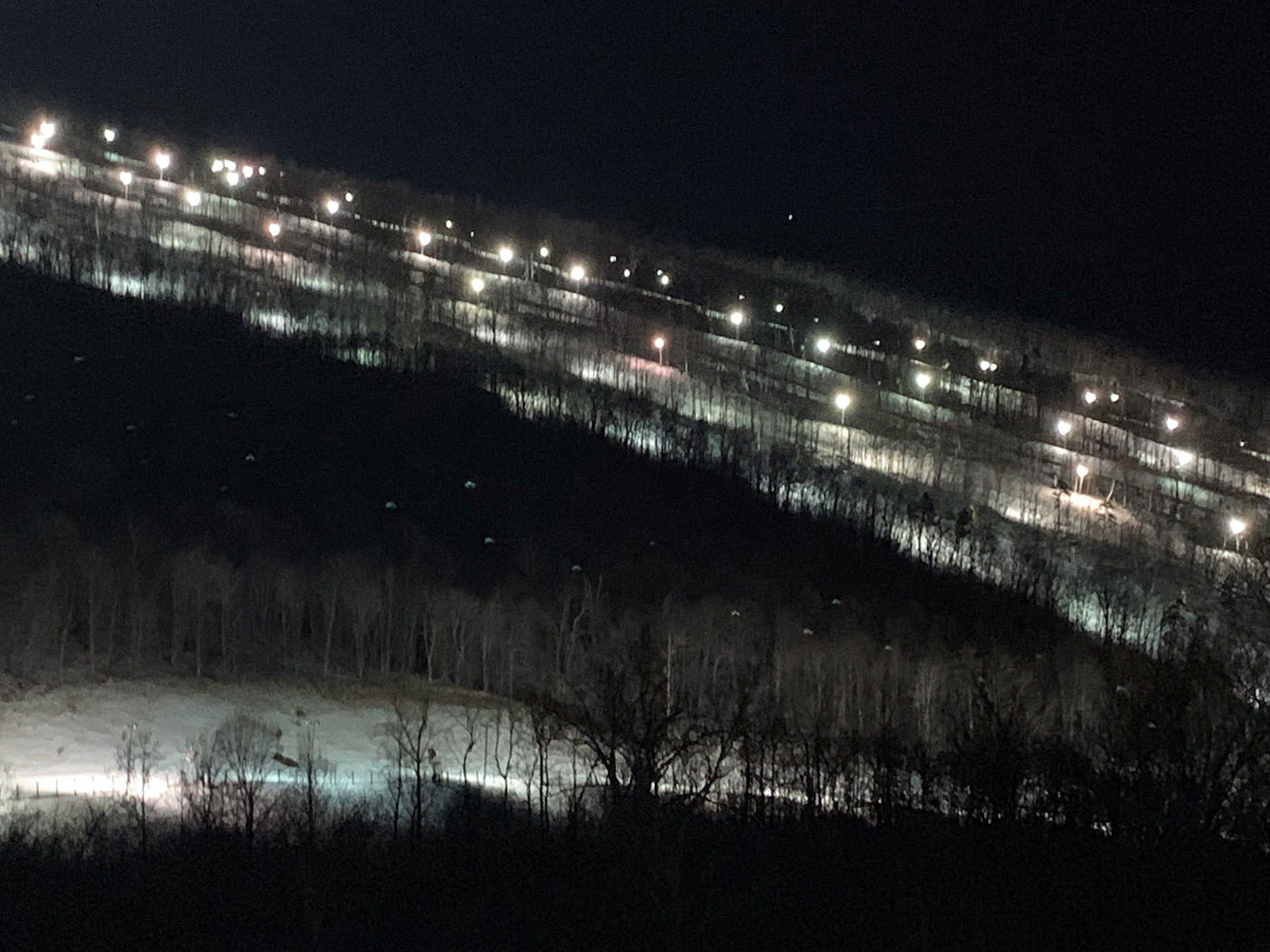 A view of the intermediate terrain at Whitetail from the top of Sidewinder. Photo by M. Scott Smith.

Sidewinder was fun and had good snow, but I couldn’t bare to ride the slow EZ Rider Quad again, so it was back over to the intermediates, where I closed out the night with some runs down Snow Dancer and Fanciful.

All in all, the snow conditions were quite good for a Sunday night. Sure, there were patches of hardpack, but they could be avoided.

Some final thoughts from my visit.

The snowmaking at Whitetail is impressive. Whitetail had received some steady rain just a few days prior, but those fancy yellow TechnoAlpin guns had wiped away any evidence. Once the season starts, Whitetail doesn’t miss an opportunity to make snow. Slopes were covered edge-to-edge with a generous base; there was no need for rock skis.

I didn’t notice any major changes to Whitetail versus last season. Whitetail invested $1.6 million in upgrades over the summer, primarily to Limelight, which had 16 of its fan guns replaced with new TechnoAlpin guns. Other enhancements were made to the snow tubing area, but I didn’t visit that. (Come to think of it, I’ve never been snow tubing at Whitetail.)

Whitetail is generally known for its customer service, but I didn’t see much of that on display Sunday evening. Several of the lift attendants looked bored and didn’t make eye contact with guests, let alone saying “hi” or smiling. Resorts such as Deer Valley and Beaver Creek know that lift attendants are often the main (or only) employees guests will interact with, and they always seem to be smiling, joking, and doing their best to ensure guests are having a good time. I suspect employees were tired after a long and busy day.

Finally, although I always recommend skiing at Whitetail on non-school-holiday weekdays, where you can find great conditions and empty slopes, if you must go on a weekend and don’t want to be accompanied by masses of people, Sunday evening is the time to pick. The crowds have thinned out, and the nighttime views at Whitetail are serene. You can also follow DCSki Columnist Matthew Graham’s advice: go on Superbowl Sunday. Most folks are at home watching the game.

Sunday nights are for skiing not football!!