The Season So Far 4

But then Mother Nature threw the region a curveball, with above-average temperatures throughout much of December. Precipitation came in the form of rain, not snow. There were few opportunities to make snow; as the Christmas holiday season approached, resorts throughout the Mid-Atlantic began opening, but with meager trail counts and thin cover. New Year’s Day — often a high-visit day for ski resorts — was literally a washout as heavy rain pelted most local ski areas.

As the New Year begins, more rain is in the forecast, and temperatures are staying above snowmaking range. In fact, the long-range forecast doesn’t show daytime highs dipping below freezing until at least mid-January. Overnight lows below freezing — crucial for effective snowmaking — are now looking like an ever-retreating mirage, always seemingly a week away. Current forecasts show nighttime snowmaking could return starting January 9; but they also show more rain is in the forecast.

In the meantime, resorts are charging forward and doing the best they can with the early-season cards Mother Nature has dealt them.

In Pennsylvania, Seven Springs Mountain Resort has been holding steady and currently has 19 trails open with a base depth of 24-30 inches. Nearby Hidden Valley is open with 16 trails, and Laurel Mountain has 5 trails open.

Former Snow Time resorts Roundtop, Liberty, and Whitetail — purchased earlier this year by Peak Resorts, aren’t off to a great start this season. On January 2, Liberty decided to temporarily suspend operations due to thin cover, and is likely to stay closed for at least the next week. Roundtop and Whitetail both have 8 mostly-beginner trails open. 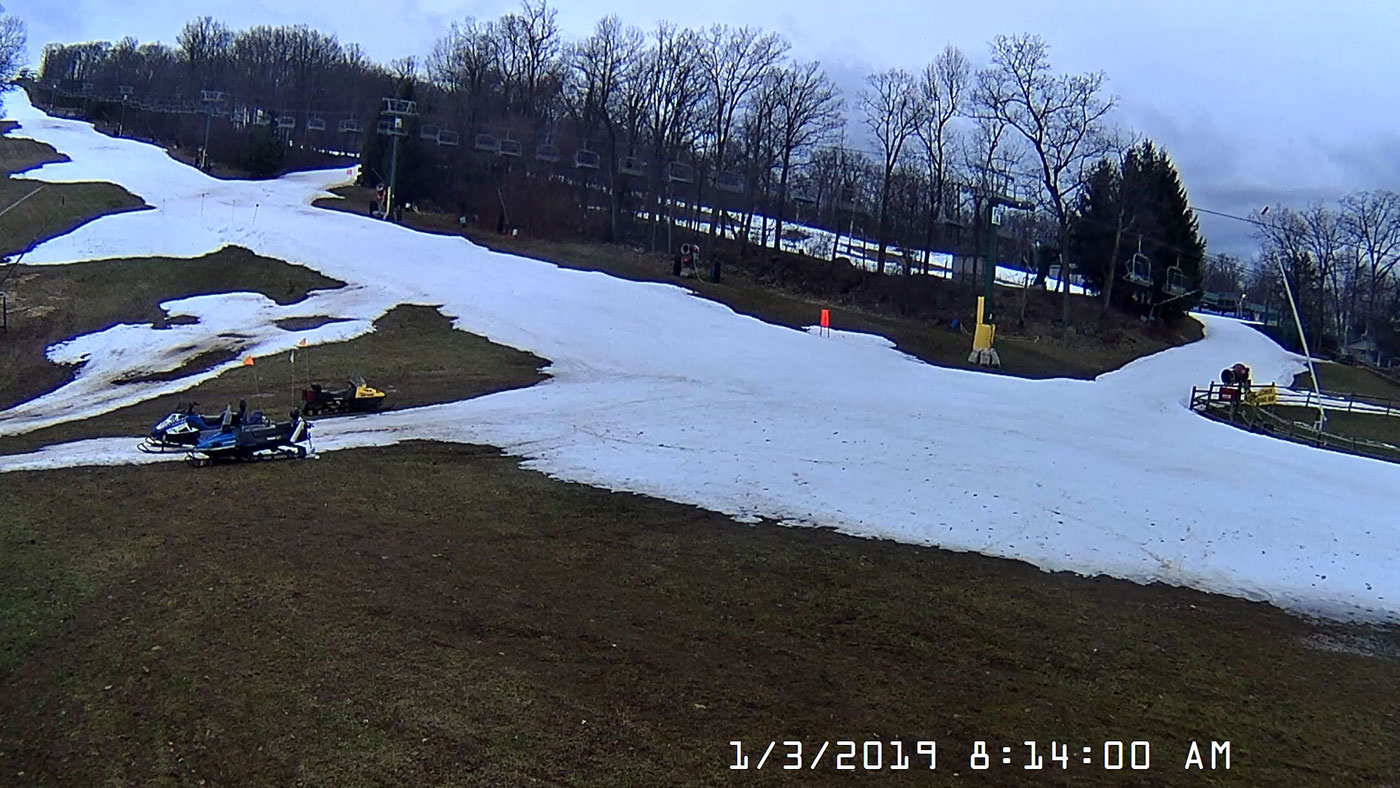 The Minuteman slope at Roundtop is technically open, but demonstrates the struggles Mid-Atlantic resorts are facing. Photo from Roundtop Mountain Resort WebCam.

North of Philadelphia, Blue Mountain Resort has approximately half of its terrain open, but is recovering from a tragedy that occurred on New Year’s Day. A 17-year old boy died from multiple blunt trauma after falling approximately 20 feet from a chairlift. Investigations are currently underway; at this time it is not clear if the lap bar was down during the accident. This is the third death that has occurred at Blue Mountain over the past year; last winter season, two visitors to Blue Mountain died in separate on-slope accidents.

Heading to western Pennsylvania, Blue Knob Resort has only managed to eke out 4 trail openings, and is reporting thin cover with the possibility of trail closings.

Maryland’s only downhill ski area, Wisp Resort, has 13 trails open with an average base of 14 inches.

In Virginia, Massanutten Resort is hanging in there with 5 trails open. Wintergreen Resort is reporting 10 trails open, while Bryce is open with 7 trails. The Homestead has temporarily closed skiing operations, and plans to re-open on or around January 12.

In West Virginia, Canaan Valley Resort exploited every opportunity to make snow in the early season and is benefitting from those efforts. The resort currently has 19 trails open, along with tubing and ice skating.

Down the road, Timberline Resort has faced a number of recent struggles, including a variety of off-slope struggles.

Heading towards the season, Timerline Four Seasons Utilities — which provides water to the resort and many nearby properties — faced a procedural Boil Water Notice (BWN) after the loss of a Class 2 operator. In essence, a utility must have an on-site operator regularly testing the quality of water to ensure its safety. Although there were reportedly no issues with the quality of water, an administrative BWN was put in place during the period of time when this operator wasn’t present. The BWN was lifted in late December after an operator was found. However, there continues to be some legal drama related to the utility; the state’s Public Service Commission has been exploring whether to place the utility into receivership due to allegations of billing and tax issues. If this occurs, the utility would be turned over to the Canaan Valley Public Service District.

This isn’t the only legal drama that has faced the resort. On December 13, the co-owner and managing partner of Timberline Four Seasons Resort was arrested in Tucker County and charged with 12 counts of failure to pay hotel-motel taxes. Multiple J1 foreign students who arrived to work at Timberline in mid-December ended up going home or moving to other resorts, contributing to a labor crunch at the resort. The resort is also working through health code violations that have temporarily shuttered its on-site restaurant.

Despite all these challenges, Timberline was able to open for the season in late December, although it announced earlier this week that it will temporarily close until cold weather and snowmaking temperatures return.

Further south in West Virginia, Snowshoe Mountain Resort is perhaps doing the best out of all Mid-Atlantic ski areas. Thanks to its high elevation and heavy investment in snowmaking, the Pocahontas County resort has 47 of 60 trails open with an average base depth of 36 inches.

In North Carolina, Beech Mountain is running with 7 open trails, and Sugar Mountain has 12 trails open.

Skiers and snowboarders are certainly hoping that a weak start to the ski season will have a photo finish, with the arrival of cold temperatures and snow later in January. This time last year, most Mid-Atlantic ski areas had the majority of their terrain open, but this year, few have reached a 50% open trail count, with many well below that.

These are the battles of the Mid Atlantic. Maybe if we can develop a mud ski?

A very depressing start to the local ski season for sure.   No good snow making weather on the horizon with a big holiday weekend just about two weeks away.   Let's hope we finally get some cold weather (snow along with it would be a bonus of course) for the end of January into February.

Snowshoe is in Pocahontas County WV I think autocorrect may have got you.

Indeed it did, David!  I have now added Pocahontas to its dictionary and corrected the error.  Thanks for the catch!