A trip to the Boston area in early December presented me with an opportunity to enjoy my first day of the ski season at Wachusett Mountain in Princeton, Massachusetts. I chose Wawa, as locals sometimes call it, mainly for convenience. It is only 45 minutes from Framingham, where I was staying. Fast lifts and ample open terrain meant I would get a lot skiing accomplished, and the slopeside demo center would give me a chance to experiment with different skis. Skiing Monday meant I would avoid the one thing many Wachusett skiers complain about — weekend crowds. 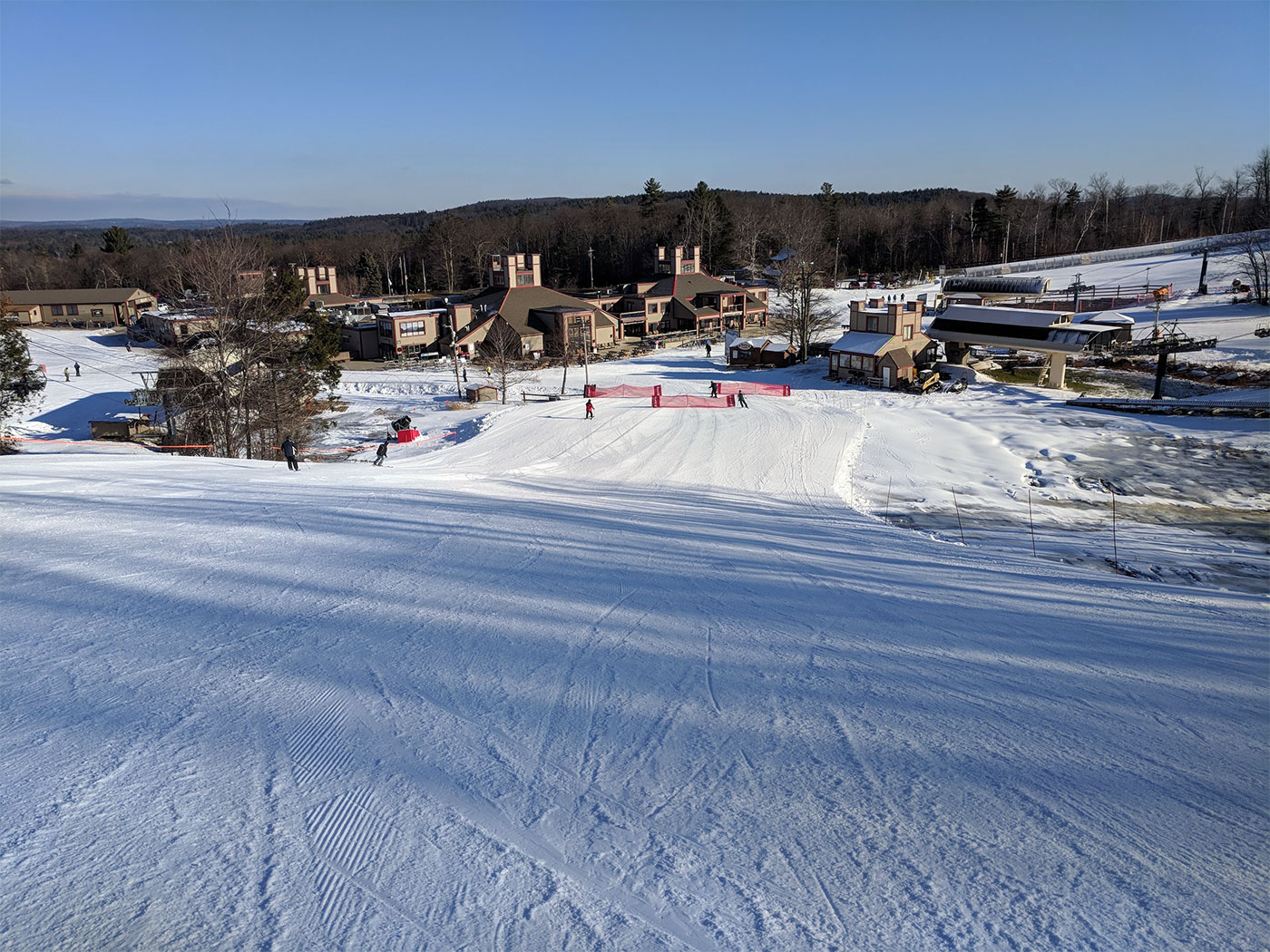 Wachusett base area as seen from Look Mom. Photo by John Sherwood.

The 10th of December was a relatively cold day: 14 degrees when I emerged from my rental car (a sweet little BMW X2 upgraded by Enterprise for free). After picking up a pair of Kastle MX84 skis at the demo center, I walked a few steps to the Minuteman Express quad, snapped the skis on, and began my first day of the season. This lift services a cruisy collection of intermediate runs — ideal for warming up.

My lift companions for much of the day were friendly retirees or adult skiers taking a day off from work. After my first run on the Look Mom trail, a lift rider advised me to keep skiing the Minuteman Express area, which offers about 625 feet of vertical.

“It is a bit icy up top,” she warned, “wait until the sun softens things up a bit.”

Still working on getting my ski legs back, I heeded her advice.

By 10 a.m., the mountain had warmed to a balmy 20 degrees with clear blue skies. The Polar Express whisked me up Wawa’s 1,006 feet of vertical in no time and I soon found myself skiing the legendary Smith Walton black diamond slope. On my last visit in March 2017, this trail was closed for a race — a common occurrence according to many locals. One woman told me she had visited the mountain six times in the past few years and today was the first time she had ever skied that trail. Only one relatively short section of the trail truly deserves the black rating, but it has a bit of teeth to it, including a double fall line. Throw in some ice, death cookies, and shadows and it made for a challenging early season run. 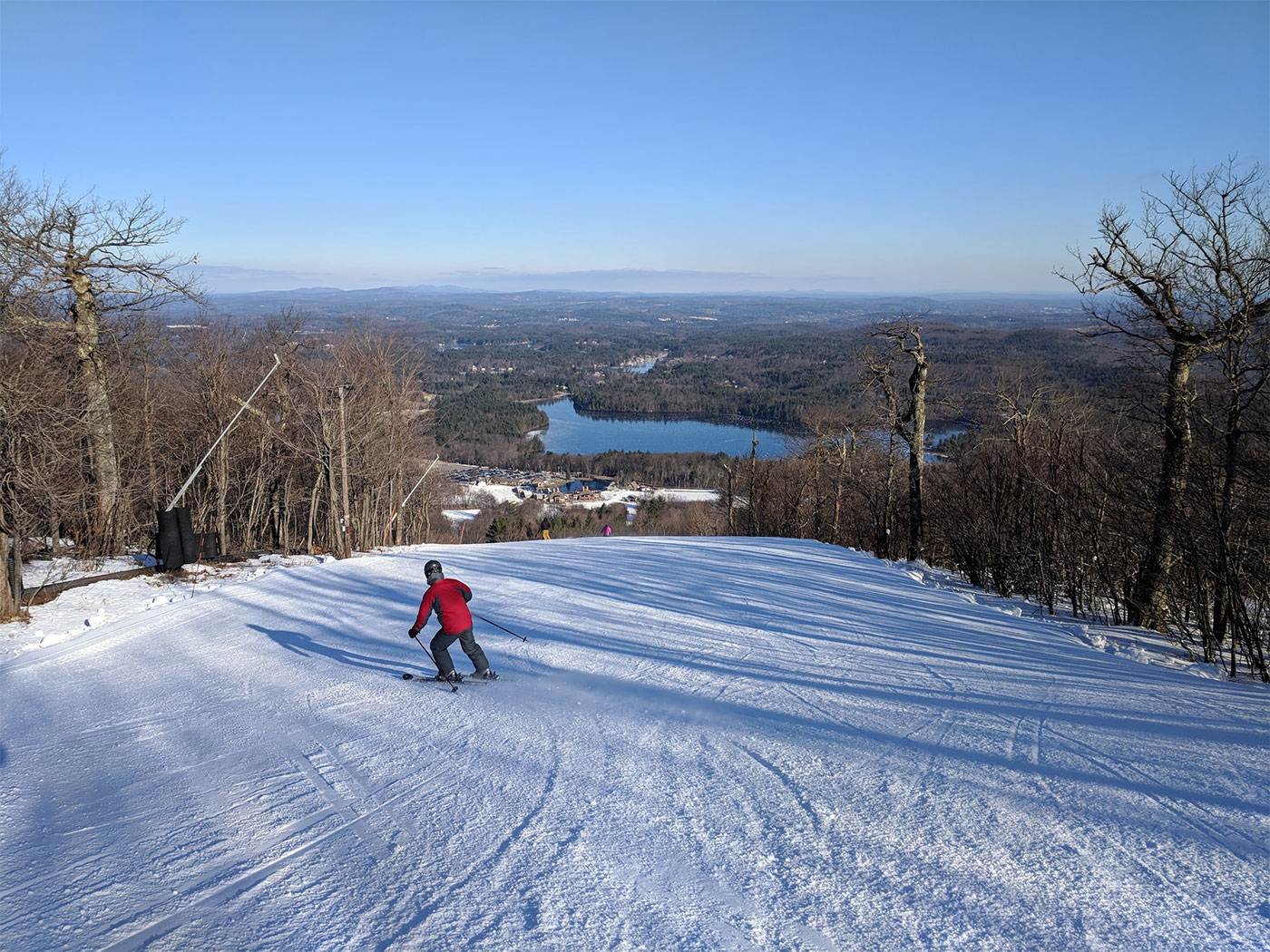 Wachusett’s grooming is usually impeccable but I learned that the mountain was training some new grooming staff over the weekend and it certainly showed in spots. My Kastles, however, had no problem finding some grip in the variable machine groomed surfaces. I made several more runs on Smith Walton before moving over to Tenth Mountain, a similar black diamond; and Conifer Connection, a blue square and the easiest way down from top.

Wachusett’s upper and lower mountain is divided by a snow-covered road appropriately named Mass Pike. Most of the challenging terrain can be found above the road, but the lower mountain can surprise you with its trees and undulating terrain. Because of inversion, the bottom was colder and icier than the top, but completely manageable and fun. There’s a gentle beginner section of the mountain separate from the other two areas, serviced by the Monadnock Express Quad. I did not ski that terrain but it looked perfect for learners and more timid beginners.

I met a non-skiing relative for lunch at the Black Diamond restaurant. It is a bit more expensive than the cafeteria, but food is made to order. My burger and fries cost $12.95 and were very tasty. Our server was wonderful. The waiters know you want to ski, and food and drinks arrive quickly. 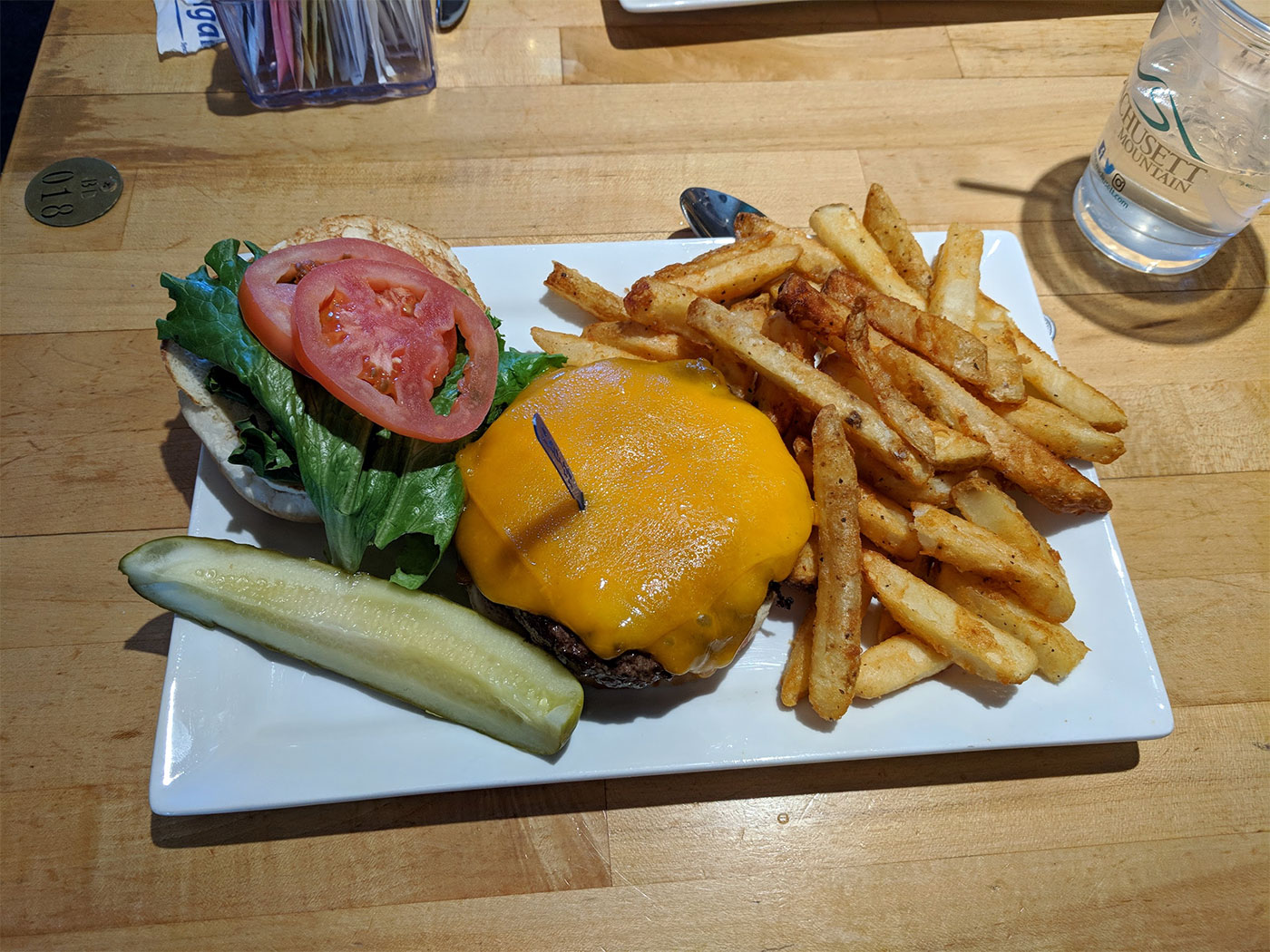 For the remainder of the day, I skied Volkl RTM 84s. These skis loved speed and gripped the hard snow well but required much more muscle to turn. I preferred the Kastles, which were nearly as stable at speeds, but much easier to turn. It would have been interesting to test both pairs of skis in deeper snow.

Wachusett relies heavily on manmade snow. After thaws, it often has more terrain and better conditions than resorts further afield because of its powerful snow gun arsenal and ample water supplies. 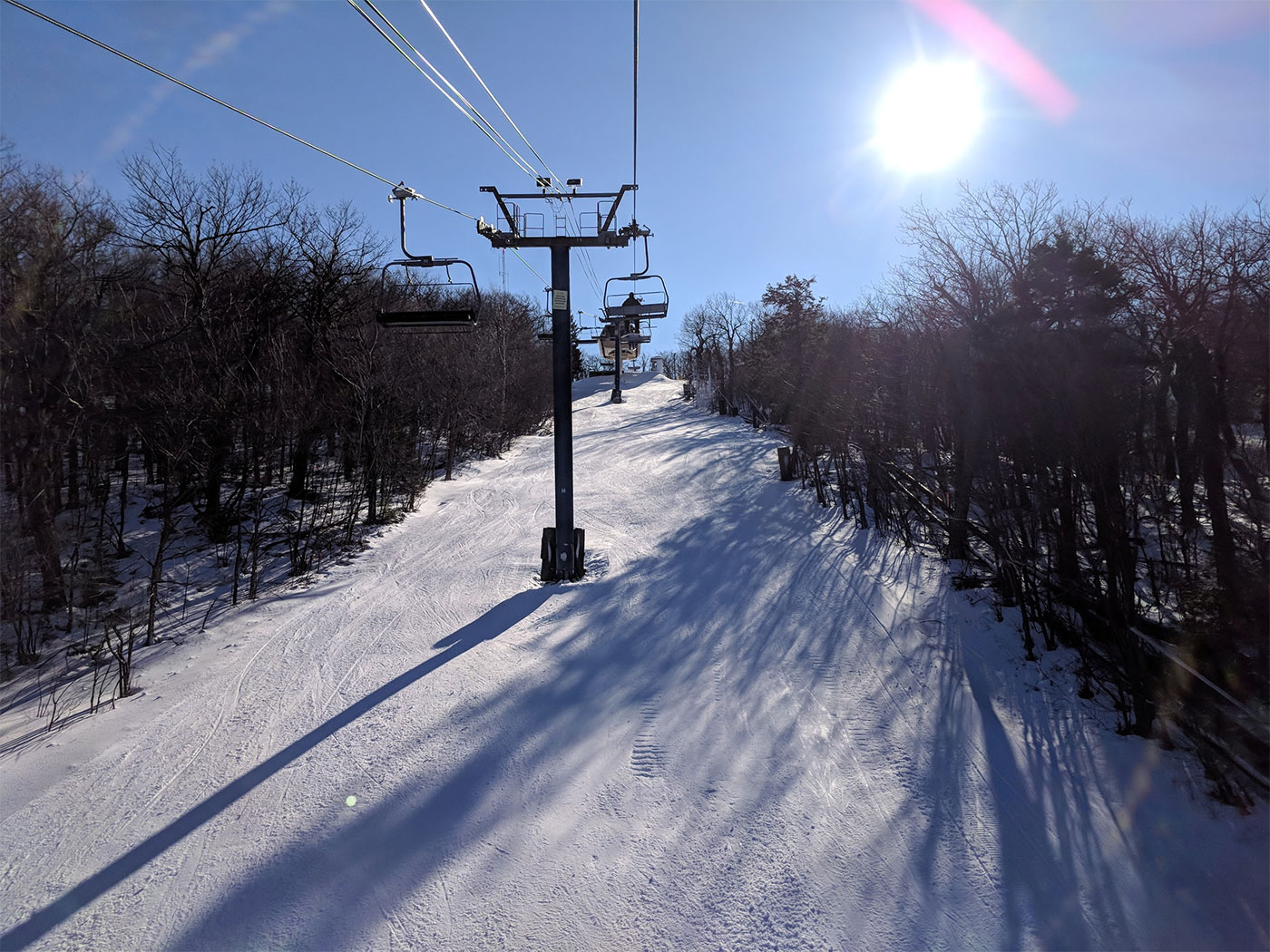 For those traveling to Boston, several other resorts worth considering are Sunapee and Waterville Valley. Both are less than two hours from Logan Airport and have considerably more vertical than Watchusett. Many other options exist for those willing to drive a bit further.

Most DCSkiers don’t think about Boston as a destination for skiing, but it is worth a trip. JetBlue, Spirit, American, United, and Southwest all offer service to Logan, so air fares can be purchased cheaply. As a frequent flier with JetBlue, I usually fly on miles and never check luggage. Instead, I carry on a Dakine boot backpack with just boots, helmet, snow pants, and few other essentials. The money saved by not checking luggage offsets the cost of ski rentals.

Those worried about overhead space may wish to choose flights served by A320s as opposed to the smaller Embraer 190s. When flying the Embraers with my Dakine, I usually splurge for an extra space seat, which gives me Group A boarding status. On my next sojourn to Boston, I hope to ski Waterville with my brother and nephew. We shall see.

Great article John.  I skied Wachusett several years ago and it was worth it.  As well, those with military credentials, even retired military, can avail themselves of amazing deals.

Your comments about the overhead space are spot on.  We just returned from Tahoe and had absolutely no problem going over on American. On the way back, it was luggage misery with United's small jet leaving Reno NV.  I am amazed we weren't charged for the oxygen we used on the plane.

We moved up here for the quality of life and skiing, going on five years, and we're ecstatic about our move.

Good Report. I was there 2 days later. Wawa is fun for a couple hours for some quick vert.

Although it is know for this...

Nice to see a DCSki writeup on Wachusett! Your article is well-written, informative, and - based on my only visit a few years ago - accurate.  The interestong layout, good snowmaking and grooming, and effective management make Wachusett well worth a visit.

Unlike most (i.e., 90+%) ski areas, Wawa does an excellent job of helping visitors appreciate the nature, history, and environmental management practices on the mountain.  With so many NE ski areas located on state or federal lands, I'm surprised not to see better interpretation of the natural and historic settings at the vast majority.  Even on privately owned property, I think it's important that the management helps us recreational users recognize that the mountain is not "all about us."

Thanks guys for the nice comments. I just love the convenience of Wawa. I can get there from Framingham in 45 mins or less, park on a Monday just steps for the lodge, grab some great demo skis, and be making turns in 15 mins after arriving. Weekends I hear are a very different story. Lou, hopefully I can re-visit some of my favorite NH hills on future visits. My brother and his family often go to Waterville. Hopefully, we coordinate better on my next visit.

Here’s a nice feature video on the mountain and its history produced by a local Boston station: