In late February, it sure looked like the ski season was just about done in the Mid-Atlantic. Temperatures briefly flirted with 80 degrees and the long-range forecast didn’t hint at any possibility of snowmaking. Snow bases at local resorts took a beating.

But some resorts hung on, and were rewarded with the return of cold temperatures in March. One of those resorts was Whitetail, which I swung by on Sunday afternoon, March 18, 2018. 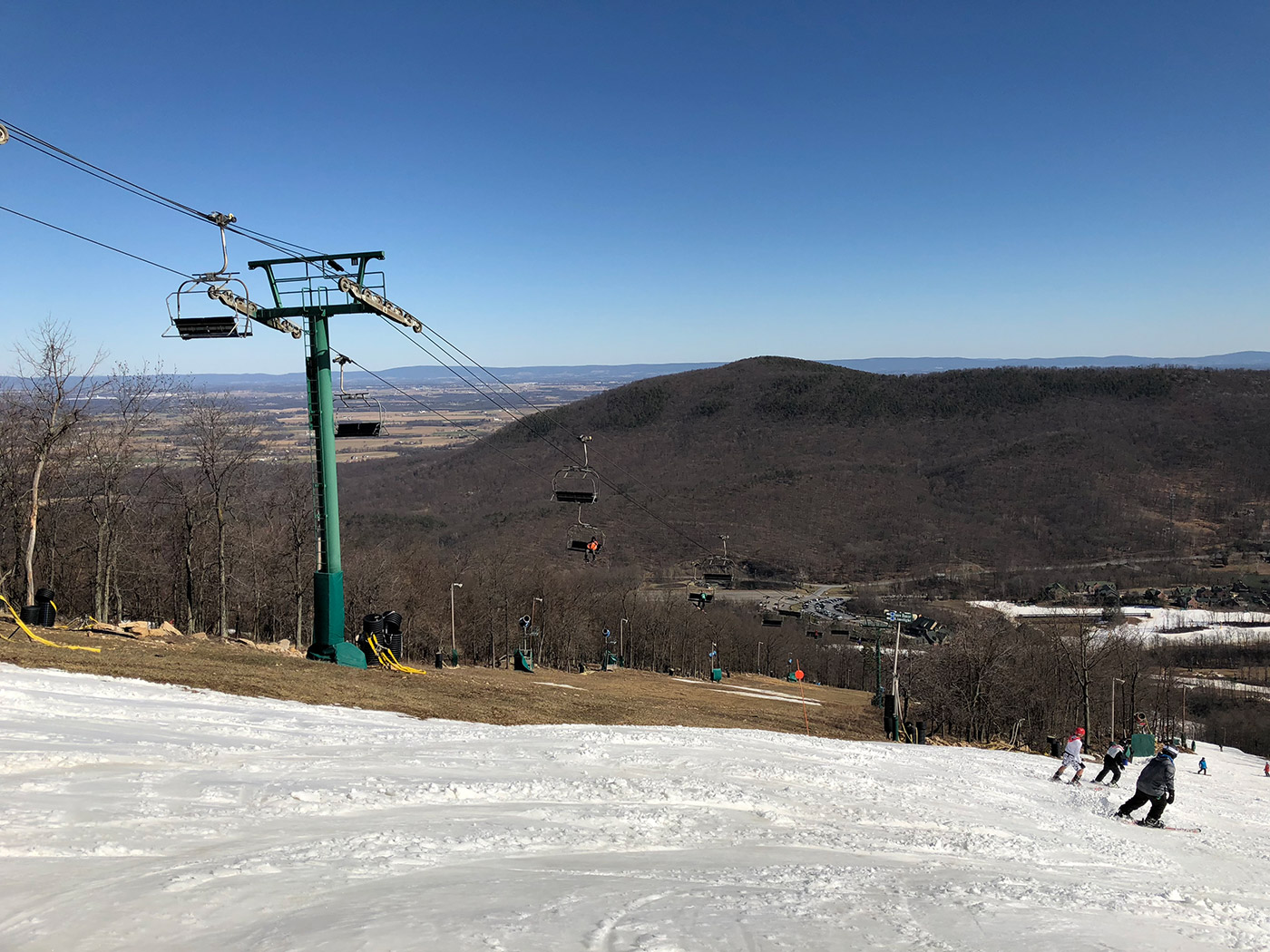 Whitetail is still making snow when it can, expanding its season into late March. Photo by M. Scott Smith.

Let’s make one thing clear: Whitetail is on life support. The wounds of late February are present everywhere you look — some slopes, such as Limelight and Snow Dancer, are mostly bare earth.

And yet, on other slopes, Whitetail has managed to preserve enough base to keep them skiable, even taking advantage of some recent sub-freezing nights to freshen up the open slopes with snowmaking. A late-season winter storm could even bring some fresh snow to the slopes midweek, keeping the late season party going another weekend or so.

When I arrived at Whitetail in the afternoon, the temperature had already climbed into the mid-50s and the sun smiled down on me. It felt warm — a dramatic change from recent weeks where I found myself shivering in single-digit temperatures at various ski resorts out west. I purchased a night season pass at Whitetail this year, and for the late season, Whitetail was nice enough to make all passes (night and midweek) valid on weekends for the remainder of the season. 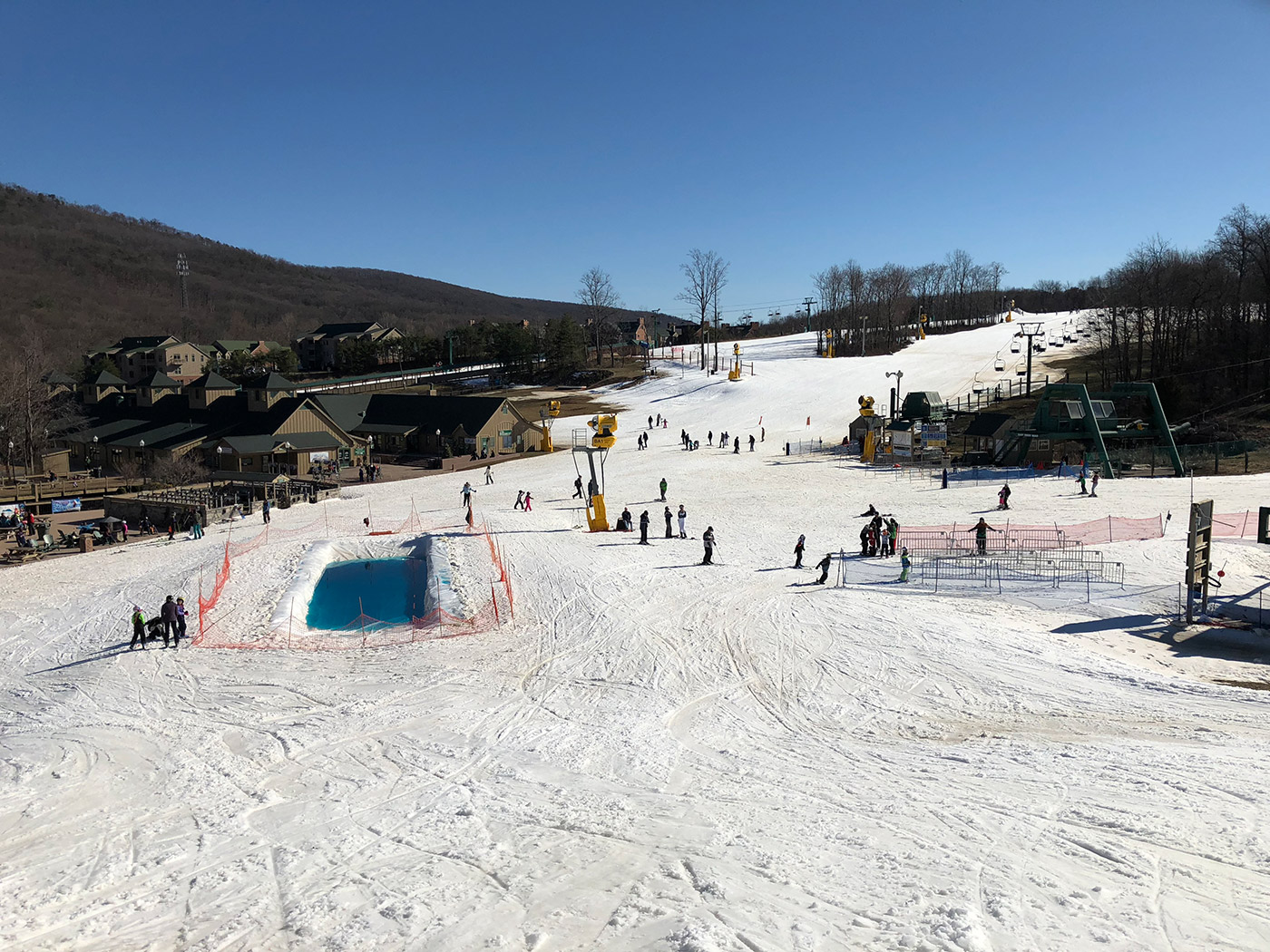 A pond skimming competition was held earlier in the day at the base area. Photo by M. Scott Smith.

Crowds were as thin as some of the slopes. Whitetail held their annual pond skimming competition today, which undoubtedly drew people to the slopes earlier in the day, but I didn’t make it in time to catch it.

Angel Drop had the most skier and snowboarder traffic during the afternoon, while other slopes were sparse. The base lodge speakers filled the base area with the sounds of a live (previously recorded) Jimmy Buffett concert.

The first few runs of the day on freshly-groomed slopes were probably quite good, but by afternoon, the sun and warm weather had turned the slopes to slush. It was almost like skiing through sticky mashed potatoes. But, honestly, it wasn’t too bad. Skiing is skiing, and by strategically picking a path down, you could find some good snow. As a bonus, this kind of spring skiing burns a lot more calories, so it’s like getting extra credit on an aerobic workout.

The few folks on the slopes weren’t doing too well, though. It seemed like more than half the skiers were really struggling with the soft snow, making half a turn before falling down. Some skiers and boarders were laughing as they kept falling in the spring conditions, while others just seemed annoyed with it. I witnessed more than one impressive spring garage sale on the slopes.

The people who seemed to be enjoying the day the most weren’t on the slopes at all, but sitting and chatting in the base area, enjoying the sun. At the ski patrol hut at the top of Whitetail Express, several ski patrollers were hanging out on the deck laughing and smiling. That’s what spring skiing is all about. 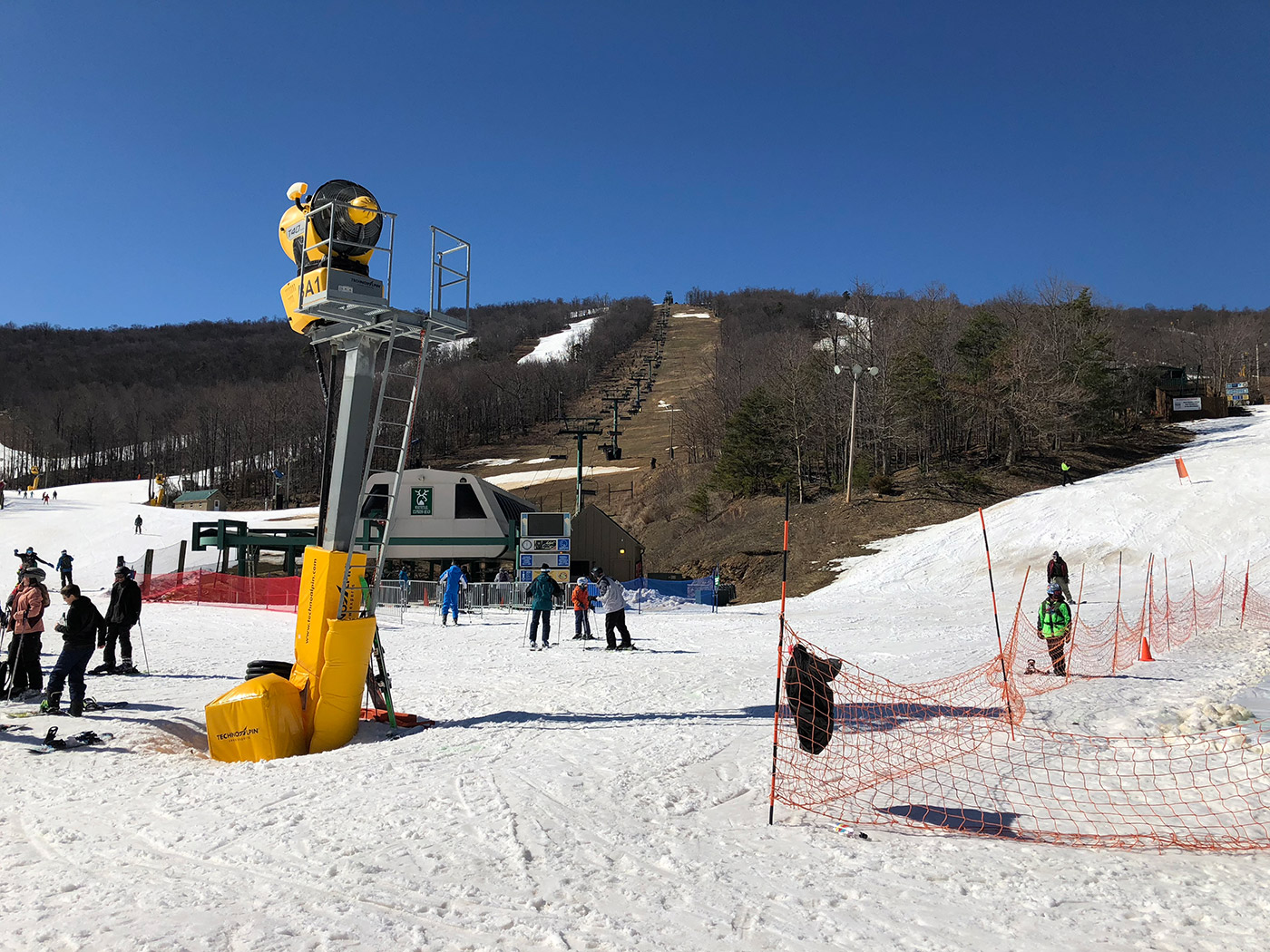 Despite only having a couple people on it, a snowboarder in shorts nonetheless almost managed to crash directly into me from above on Exhibition. He apologized, and I looked back in confusion at how he possibly could have come barreling straight at me given how uncrowded the slope was. Oh well — even when there aren’t crowds, it pays to ski defensively.

Some of the best snow was on expert Far Side — I think that slope just holds snow better. Out of the intermediates and experts, I think that was the only open trail that had traditional snowguns on it. The slopes that have the newest Technoalpin tower-mounted fan guns were generally the ones that were still open, demonstrating the benefits of the newer snowmaking technology. The Technoalpins cost far less to operate as they don’t require compressed air. They can pump out a lot of snow when the conditions are right, and Whitetail has clearly put them to good use. 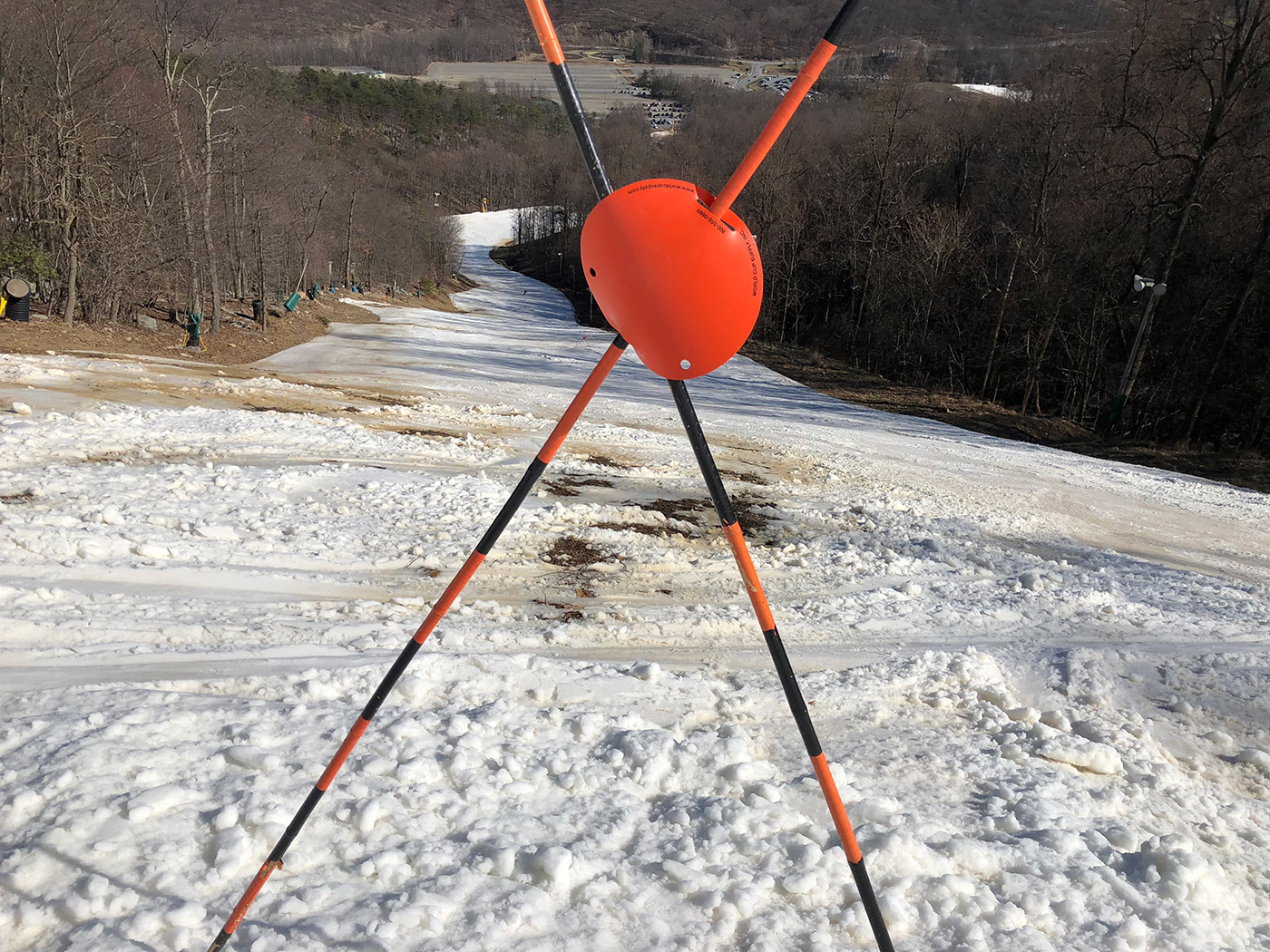 Bold Decision is still open, although part of it requires some delicate maneuvering to avoid thin cover. Photo by M. Scott Smith.

Bold Decision was in pretty good shape except for the steepest part, which had very thin cover — to include no cover in spots — and required a careful path down to avoid hearing that cringe-inducing scrape of rock-against-ski.

Beginners Snow Park and Ledgewood were completely closed and mostly bare earth. It looked like Sidewinder was still open, although I didn’t make it over to that part of Whitetail. 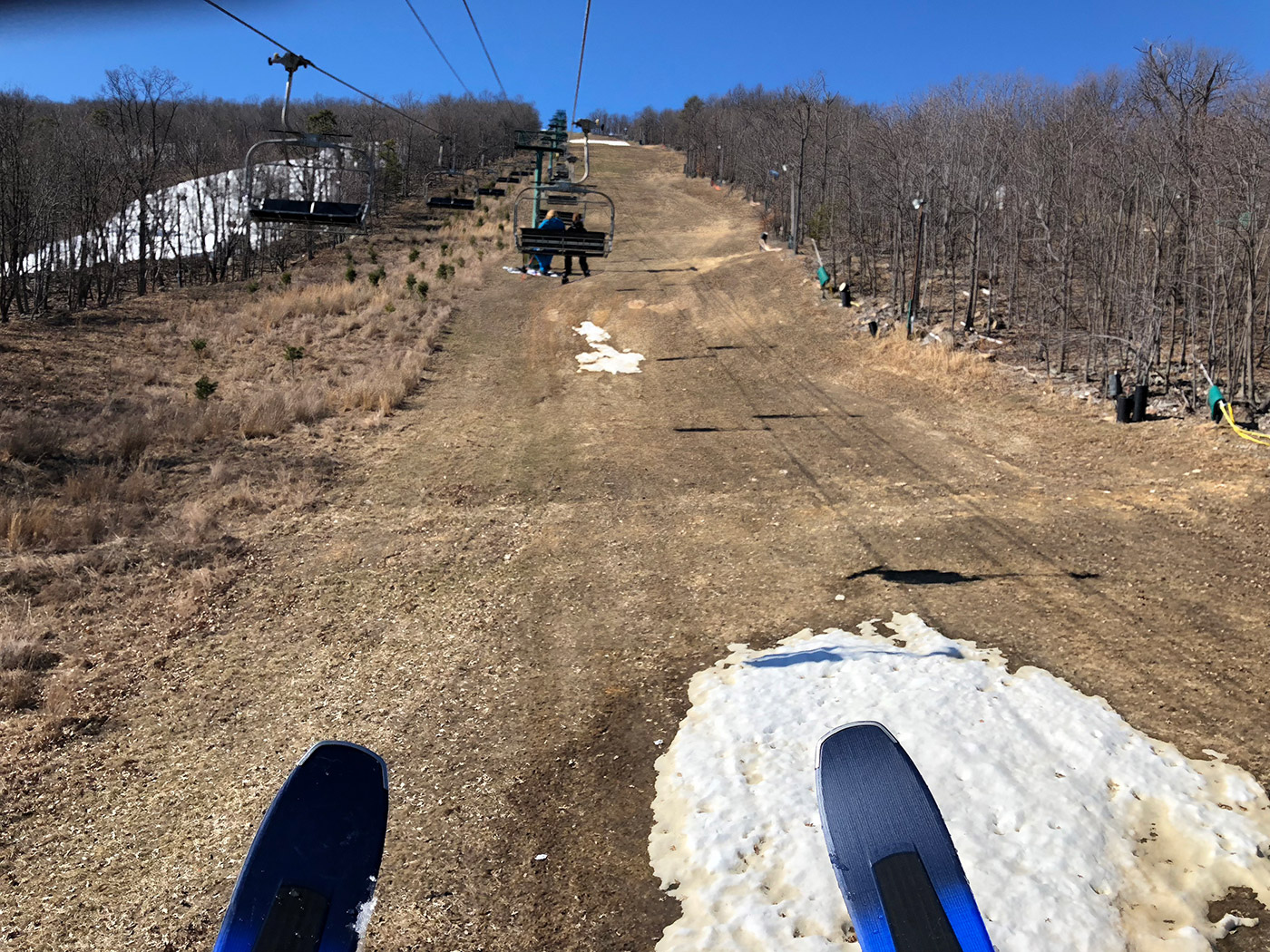 Intermediates Fanciful and Snow Dancer were open with soft, slushy snow. Limelight and Homerun were dirt, and unsurprisingly, not open. Angel Drop had good spring snow and Jib Junction had a few features available.

All of the experts are still open. 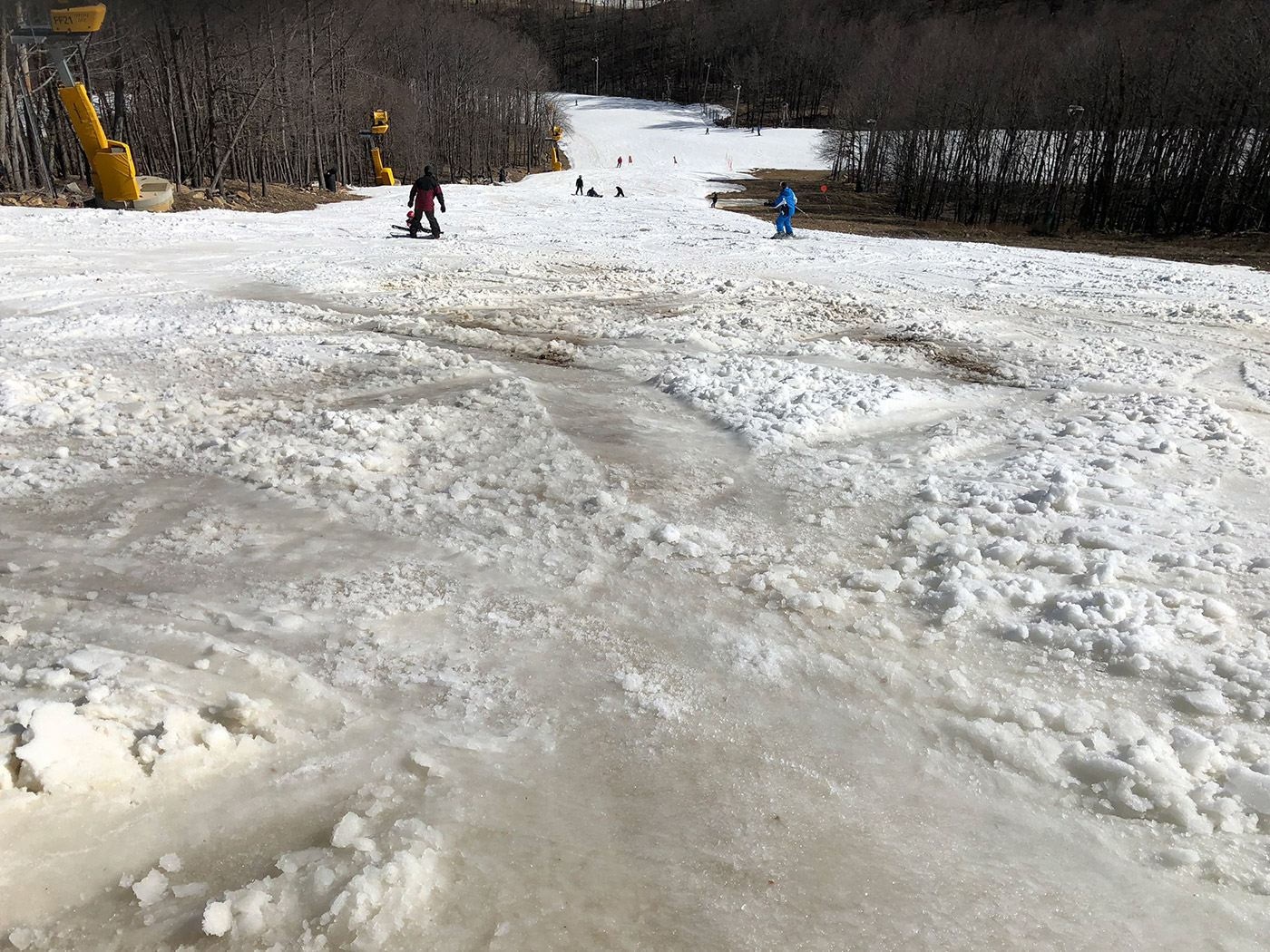 After a couple hours, my workout was done and I tossed the skis over my shoulder and headed back to my car. As I was walking away from the lodge, a few skiers were arriving.

“Is it slushy?” they asked me, tentatively, while peering up towards the mountain.

Being able to ski on March 18 in the Mid-Atlantic is pretty good in my book. It was clear that most skiers and boarders have hung up their gear for the season — a month ago, the parking lot would have been packed on a sunny Sunday, but today, it was nearly empty. With the warm temps, I was sweating by the time I got to my car. I could hear frogs chirping in an unseen stream somewhere near Fallmount — a definitively-not-winter-like sound I’ve never heard at Whitetail before. The frogs are ready for spring to arrive, but to our benefit, Whitetail is stubbornly refusing to close just yet. Enjoy the skiing while you can!